I know the Sun and Mercury retrograde are in Svāti naksatra, I’m just thinking out loud.

Working deeply with the ‘fire’ element in its manifestation as Aries has been deeply beneficial for me. I’ve naturally begun to move towards the ‘earth’ element in the form of Taurus.

My major takeaway is that it is important to act and get in tune with the body. Fire purifies - it clears the path - Aries under Ketu (Ashwini) destroys all that is degenerate and the balance of Ketu and Mars results in strong action with the intent of encouraging health, symmetry and balance. This sets the stage beautifully for the introduction of the earth element as Taurus, especially in her form as Rohini, open to all and devoted towards the cultivation of earths bounties and beauties.

Mars and Venus are consorts according to roman mythology and not without good reason. Mars ensures the environment is safe and ‘purified’ (which is cleared from degenerate influences) for Venus to come in and tend to the environment and encourage creation. Aries or Fire is the instinct to act whereas Taurus or Earth is more measured in her action, waiting, listening, observing, taking in all the things around her and intuitively discerning when movement is necessary. This is because earth is the most stable and lethargic of all the elements, least susceptible to mood swings and sudden changes. She functions as the protective layer upon a fiery foundation - in a similar way to how the earths core is scorching hot but surrounded by layers and layers of rock and earth. Mars or Aries is that fiery core and the earth element is that protective layer that ensures one isn’t at risk to the scorching nature of the pure, fire element which is unrestrained instinct and action with the ruthless intention to eliminate all that is not worthy.

This is also why Aries comes first because this pattern is mirrored in nature in which the young of all mammals is at greatest risk - as conception in itself is not guaranteed, nor is the safe delivery of children or (historically speaking) the survival of children to adulthood. This brutal reality is the encapsulation of the martial or ‘aries-like’ impulse to purge all that it deems inferior or weak which is why it requires the more stable, generous earth element to manage such an impulse. This is why Aries is succeeded by Taurus and why earth signs are the true opposite of the fire element (and not water as is commonly believed) because they function as the stabilising element to mitigate the destructive nature of the fire element.

This is my chart, it’s according to vedic astrology. I read your venus in 12th post and completely identified with your writings. If you could tell me about :

1) I am lazy and procastinate all the time. What planetary placement causes this, any remedy for this?

2) What career path should I approach. Currently enrolled as Computer Science Undergrad.

3) When will I meet my darling :) Its been 4 years when the last one left me. When in the coming years might I find the one ?

Honestly, I would want that you answer all of these stupid questions :) But if you cannot or do not want to answer some of these 3 then it’s fine too. Really looking forward to your reply!

!) moon and saturn in Taurus can be responsible for slowing the thinking, causing laziness and a general love of comfort..So it;s not uncommon to procrastinate.

2) Computer science career interest can be a by product of having Sun and Mercury in systematically and analytical sign of Virgo in the 11th.  The 11th house, which sun and mercury is placed, is tied to big projects and working in corporations.  Rahu is also in Gemini, which can equate to needing a communication and technology type job.  Rahu’s dispoistor is also Mercury conjunct the Sun in Virgo, which ties it all together.

3) Marriage and meeting someone can be interesting to predict, here are some ideas:

The lord of your 7th house is venus is placed in the 12th house. This can mean you meet your partner in a foreign land or they come from one.

I googled the name  Vardaan so I am presuming you are male.  If so spouse is tied to Venus.  Here we see with Venus in Libra in the 12th we see a fair, beautiful and social spouse.  One is very communicative, tied into politics, probably enjoys shopping too.  Downside of Venus in 12 is a possibility of falling in love with spouse that is unavailable, to far away, or can be what we call in America as a pipe dream (unrealistic to attain.)

In terms of timing we would look for Dasha time period activation of 7th house.  So if mahadasha period or antardasha has Venus active, it activates the 7th house ruled by Taurus.  The Moon or Jupiter Dasha periods can also activate meeting a spouse since they are in the actual 7th house.

Marriage can be delayed until 30 or onward due to Saturn in 7th house because Saturn restricts, delays but never denies. jupiter there brings you optimism through a relationship, but cautious one with a conjunction to Saturn. 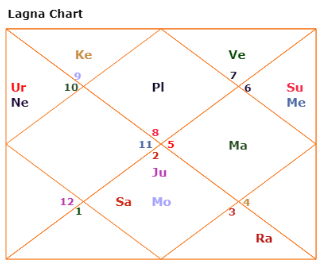 oh yeah! dont worry i will make a separate post about how to calculate this one and how to make interpretations of your future spouse

this technique is about finding your upapada lagna in your vedic birth chart and on the basis of that you will have to make a birth chart of your own future spouse, and that will give you the detailed prediction of your future spouse and the marriage life with him

i know this sounds difficult and confusing but i will try to make a post about this one, once my exams are over and i will also do this technique for the part 3 of jae’s future spouse

this technique is a little difficult of understand and i myself was very confused about this one, but after consulting with a astrologer/ you-tuber, i got the right way to do this.

looking forward to share this technique with you guys

#astrology, #vedic astrology, #upapada lagna, #i told ya guys, #vedic astrology is more accurate, #this technique is amazing, #once i have done it for my candidates, #i will do it for myself, #i might even start doing free personal readings
1 notes · See All
bhaskarhindinewsText

Only one ego will become subservient to the Higher Self and that is the sattvic (pure and in alignment with love) ego. The rajasic and tamasic (both too attached to the material world and their own separate identities) egos won’t surrender to anyone or anything else as it sees surrendering as the death of itself.

This is why the Sun is debilitated in Libra. In love, ruled by Venus, there cannot be a battle of egos. The Sun, the I, has to dissolve into the You in order for there to be Love. When there is no I and You there is only one Love. When the ego is not dependent on anything or anyone else for love but is sourced by the love from the Higher Self within, that’s true independence. Then it becomes love and can give of itself as love.

You can find the whole video here https://youtu.be/AKBVFa65goc

Today is a powerful day in the Vedic Zodiac. What is true independence? This is the lesson that Sun in Swati Nakshatra in Libra helps us understand. Moon in Dhanishtha Aquarius also helps us share these understandings with the world around us as our gift to humanity. 11/25/2020

Jupiter is the traditional indicator of the spouse in a women’s birth chart, but it also indicates the native personal beliefs and can affect the native’s relationship patterns.

Venus is traditional indicator of the spouse in a man’s chart, but it also indicates the native’s ability to give and sacrifice in a relationship. As a planet of material and romance satisfaction, the nakshatra positionated in Venus indicates what kind of “type” the native may prefer.

Moon is the native’s mind, body and indicator of maternal parenting style, but it also refers to the sense of security and the expectations of what a relationship can provide for the native.

2. Yoni consorts: Compatible but can lead to codependent relationships/merged identity.

11/23/2020 Today is the 7th day of the 9 of Navaratri, indicating the Dark Night of the Soul. Today the innocent moon is with harsh Saturn in Capricorn.

check where the ruler of ur 8th house is placed in your chart. that will help you indicate the best way you learn astrology. (8th house rules occult things, like astro)

my 8th house ruler is in my 7th house & is also my chart ruler, so through my close relationships w ppl & my own personal life experience is how i learn astro (and its at a capricorn degree, so its gonna take me a WHILE to learn 💀)

things that have helped me though:

this was so long omg i hope this helped 😭😭