Rating: Gen for now, going UP to Explicit in the next chapters

Summary: Din Djarin is a caring, loving dad, and it’s exactly what Grogu deserves. When Grogu’s therapist suggests that he practices a sport or something to let him explore his true personality more, Din decides to bring him to Luke Skywalker’s dojo, to learn kung fu.
Everything seems to be going fine for a few weeks until one day Luke hits up a super hot man on Grindr without a face picture, without realising it’s Din himself. They both know Grogu’s a priority, but there’s nothing wrong if they sext a bit, right?

The kid is holding onto his father’s leg, his presence strong, unmovable, like an anchor keeping a ship steady while the wind blows and the sea foams and roars. The man, tall, broad, dark eyes, dark hair, olive skin, looks down at his son.A broad hand strokes the kid’s light hair gently, tucking a strand of curls behind one of his ears: they’re big, flushed red in this moment, like the kid’s pale chubby cheeks. His wide eyes, dark as his father’s, seem to swallow the space whole.

Notes: I told myself I wouldn’t have written another fanfic that’s not a commission but here I am self indulging in DinLuke hell lmao

So, the hat I crocheted looks more like a pair of underwear, but I tried my best using no kind of pattern…just made it up as I went along trying to shape it to his head.

I’m thinking they should have used Sebby too.

That CGI was terrible.

Also, Cara and Fennec will soon be married 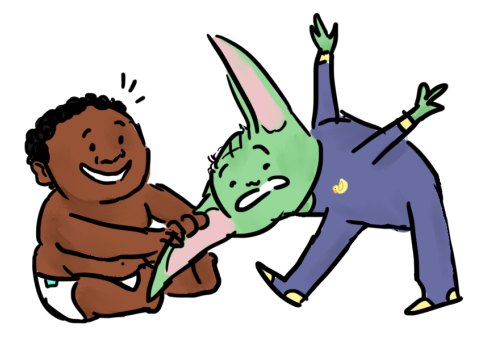 May the force be with you

Hey yeah so here’s a panel from a Mando comic I’ve been working on. Part one will be posted Tuesday!

A FLOWCHART OF MANDALORIAN HISTORY (Zoom In!!)

Hey guys, so I made a thing. Feel free to share with anyone you want, just credit back to me since I made it (although I obviously don’t own Star Wars history).

Basically, I’m a fanfic writer and all the crazy Mandalorian history was starting to get jumbled in my head. I like to make sure my fics are as accurate to canon as possible, and the history of these characters feeds into both their development as characters, and also helps predict how they will act, their logical next steps, etc. I was trying to remember who was on what side when, and at what point Death Watch was no longer Death Watch and yadda yadda… so, I made myself a handy timeline/flow chart. Do you write Mandalorian/Star Wars fanfic too and want a cheat sheet? Here you go!

On the far left are some general SW galactic events to put Mandalorian history in context of the larger SW universe. Note, the dates in the timeline are meant for labeling the Mandalorian historical events. However, I do have an even more detailed timeline with concrete dates for all the events in a separate Google sheet though… (yikes I’m a nerd). 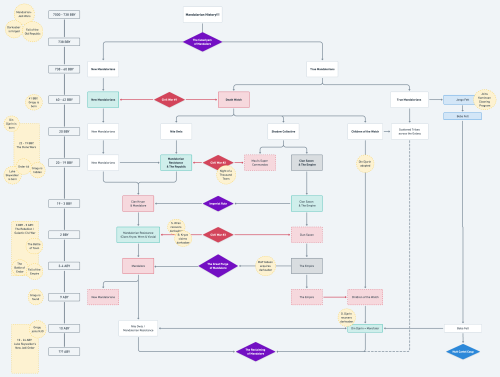 There’s this scene in The Mandalorian where Djarin has to take his helmet off to scan his face and it immediately gives him access to all this data.

And we’ve all been making fun of it because it’s like, the least effective security measure there is. Anyone With a Face can get exactly what they need, so what’s the point of even having a scan?

It comes off as just an Overt Plot Device, but I think there is some logic to it.

First off, this console is in the heart of a very secure secret base. It’s assumed that you have to be imperial to even get close to the thing, so it’d be redundant if the console itself had the same security measures that the base already had.

Of course, there’s nothing wrong with redundancies, especially when it comes to sensitive information, but the empire doesn’t just want to keep the information secure - they know that it needs to be regularly accessed by their people, so they want to keep track of WHO is using this machine.

If the data is mishandled within their ranks, or if they’re betrayed by one of their own, that’s something they’d need to know. So, they’re more focused on keeping track of the users, because even someone with security clearance can turn on them.

But why not do both? Why not give everyone a unique access code? Why not have the facial scan linked to a database of their people?

Let’s consider the state of The Empire at this time. It’s underground, still. It’s in hiding. Their recruitment and onboarding processes aren’t going to be as formal as they used to be. It’s probably more like, you show up to fight, they give you a gun. They’ll give you a TK number, but they probably don’t care as much about setting up your Unique Employee Gmail Account. Plus, their turnover rate is Astronomical, especially at this base. They’re losing troopers all the time, and there’s not much point in keeping a database of people who are going to be dead within a month.

They don’t think anyone is crazy enough to infiltrate their base to get to their console, so they scan your face, assuming you’re one of theirs, and if you fuck with the data, they’ll come after you later. It’s easy, it’s efficient.

It also says a lot about The Empire and how they treat their soldiers, which is in line with the later confrontation between Mayfeld and Valin Hess. They don’t care who you are. They don’t even bother to keep track. You’re expendable, unremarkable, easily replaced. It becomes especially powerful when we contrast that with the Clone Army. They were literally Manufactured Beings who were identical genetic copies, but the Jedi Generals still took the time to appreciate their uniqueness, to always use their names, to value their insight and, at times, protect them with their lives. The Republic had it’s issues, but to me, that’s what separates Good and Evil. 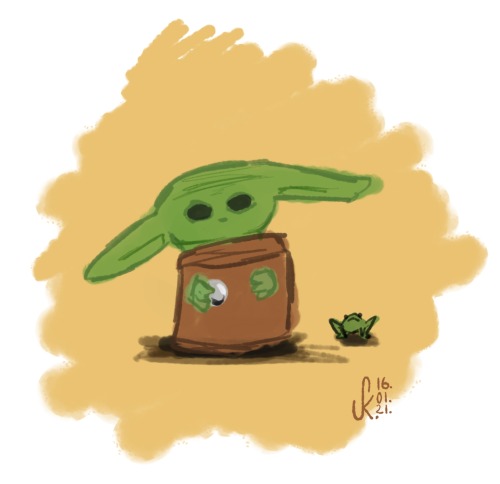 Chronicling one bounty hunter’s journey across the universe.

The new Covid strain is a bitch and so am I.

Boba Fett and Din Djarin looks at each other and nodded.

Djarin : Oh no! *slowly falls dramatically* I’ve been gravely wounded! Fett, you have defeated me. This darksaber is yours and now you rule Mandalore. Farewell universe! *Grogu walks to him and pat his helmet then move to sit by his head, eating blue cookies*

Fett : *stares at Bo-Katan as he grabs the darksaber from Djarin* … Fight me, bitch.

Bo-Katan : *shaking in fury as she watch all this shit*

Am I about to save up a ridiculous amount of money so I can get a realistic Grogu doll??? YES

I’m hosting a draw this in your style on insta!! Just thought I’d share the image:))