Media: Do you think you should lose some Wei-

Here you are love!! Hope I did him justice.

I’m up tryna write something good for y’all. I may have to split this up into two chapters; ‘cause I have too many ideas for one! Would y’all be okay with 5k words? Lol

Lord M’Baku takes his horse for a ride on a warm summer day. They come to a river and M’Baku guides the horse in until the water touches his feet. You walk by and he notices you. He waves.

The Jabari people teach themselves sign language as a way of communicating with the gorillas in the mountains.

When I child is born deaf, they are praised by the tribe because they are seen as “closer to Hanuman” and are usually put in charge of looking after the gorillas, a most sacred duty.

But how sick would a Yibambe tattoo be?

Author’s Note: Whattttt a freaking Vikings/Black Panther cross over?? I am here for it. I hope you like it. Definitely fun to write I would have loved to write this as a series, It’s in a weird outline head cannon form because I’m awkward. You’re welcome.  Requests are Open. Taglist Open!! Send to the Asks!! To remove send to the inbox!

Requested; Headcannon: Ivar & M’Baku fighting over the reader, they battle it out; & then become really good friends. - @anon

Wow. Honestly, so did I.

I feel so seen.

“Yeah, we’re just gonna 100% stealth our way into the MIDDLE OF A WAR AND OH HEY WHAT’S UP HOO HOO HOO FUCK YOU KILLMONGER.”

Me: Those lineups are TIGHT. I want to know who the Jabari Barber is.

Part 2 of Closer to Heaven (Star Bound): Nothing Good Can Come from This (Nothing)

A/N: Big shoutout to @lesqui​ who enabled me to finally finish this chapter i’ve been sitting on for a while. You are the absolute best!

The strangeness that had lingered in the air of the Jabari lands for the last few weeks seemed to have dissipated, leaving in its wake a heightened energy of sorts, one that all led back to the woman who had laid in a bed of snow.

M’Baku would finally be able to get the answers that had spurred the moment his gaze had fallen on her. There was, however, one question he had successfully answered on his own. There was nothing courageous about that woman, only infinite stupidity. The healer had briefed him on her present condition, a condition that had left them both perplexed.

Exhaustion, dehydration, starvation, hypothermia and to top it all off, a broken rib that had been left untreated.

M’Baku had witnessed his fair share of ailed travellers, yet she stood alone.

(unbeknownst to him, as she had always stood)

Story idea: Set in Wakanda, this rolls on from another story idea about bucky as a war dog running into someone who was trying to find out the truth of her husbands death that she believed to be part of a conspiracy. Their path cross and she ends up losing her home and everything, but is given a job in a school T'Challa had set up in a poor neighbourhood.

Infinity war takes place and she ends up in the middle of the battle in wakanda helping to defend the Jabari home as they come under heavy attack away from everyone else.

The character in question is called Eliza Jackson, but is given the nickname of Foxbite because of her wild red curly frizzy hear and sharp attitude. She is badly wounded in battle after what she claimed was a hell dog from space bit into the side of her waist. She survived.

After the battle, many Wakandans have perished or turned to ash. Some time after he invites Eliza into his tribe, after being impressed by her efforts in the war and feeling a kinship to her. Both not liking the outside world and not wanting to be a part of it.

The story is then about learning about each other, and helping one another cope with loss and to find life again. The emphasis is not on romance or anything like that. But more growing as people, together. I quite like the idea of him bonding with an outsider, as hes protrayed as being quite anti the outside world and wants Wakanda to remain isolated from it. To then find an outsider who AGREES with him…but for her own painful personal reasons, which makes him revalue his opinions on the matter and where his tribe is heading in the future. And she learns what it feels like to belong to a community, which shes never felt before. It touches on some interracial issues, but its not the main focus. As colonization never happened in Wakanda, so they dont have that feeling towards her, but more of a sister who got lost and has come back to them in the form of an outsider.

So its an insight on how their society works, their beliefs and views and attitudes, and how she comes to embrace it.

Bruh that one Jabari woman. Who is she? What’s her story?

Summary: he loves her + she loves him (maybe). They’re not good without each other but aren’t that great together either.

Warning: slight choking (not to be perceived as suitable romantic behaviour).

The second M’Baku breathes out the word he curses himself. Out of all the things he could have uttered, the only thing he had found to say was “hi”. He had imagined this scene hundreds of times in his head and dreamed of what he was to say when his eyes finally fell upon hers. A fateful reunion worthy of a thousand tales. 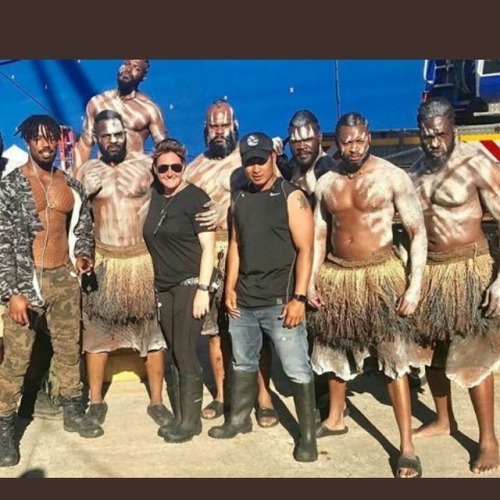 T'Challa when M'Baku said no to letting him borrow his army

WOW I LOVE THIS SHOW. 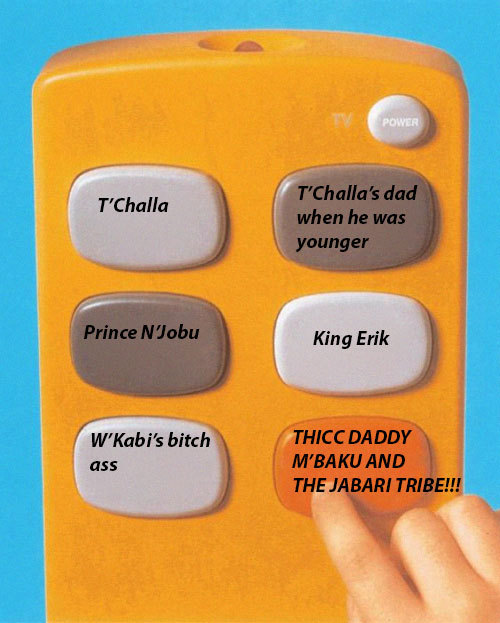 #m'baku, #jabari tribe, #There wasn't enough of them in iw, #black panther
268 notes · See All
Next Page