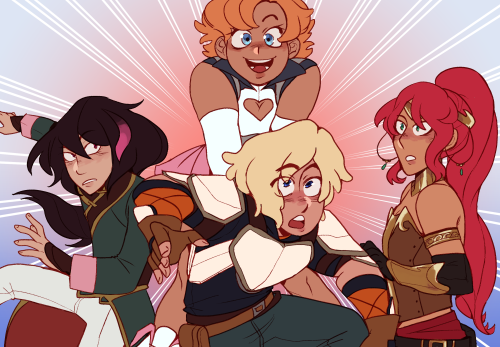 Winter: *smiles as she watches*

Harriet: *helps him carry a load*

Jaune starts to confess his feelings for Neo

Jaune, getting even more confused

Neo: *When things get hard, or scary, or confusing, I run. And if you’re about to say what I think, then I’m going to try to run away. So I need you to stop me, because I have something I need to tell you after.*

Jaune: NO! NONE OF THAT! SHAME ON YOU!

Ruby:Oh hmmm uuuhhh oof. That’s uh, oh boy! I’m sure it means nothing. She’s not even one yet.

Ruby:*speeds through door* Nobody move!

Rober:Shit! It’s The Storyteller! *points gun* You may be fast, but there’s no way you can stop me before firing-

Carmine*busts through window and kicks him* You’re under arrest. Guess you forgot about the window on the second floor?

Ruby:And apparently you forgot the door up there was unlocked! We have to pay for that window!

Carmine:….Was my form good at least?

Ruby:Gosh Carmine, you’re so…. *hugs her frustration* your form was perfect.

Nora: We either die free, or die trying!

Jaune: Are those the only choices?

Jaune: it’s so weird how an 18 year old can adopt people 17 year old and younger

Ren: Jaune I need you to do something for me

Ren: do not tell Nora, do not give her the power

Cardin: *Shoves Jaune into a locker*

Pyrrha/Yang/Cinder: *Shoves a locker into Cardin*

Sorta in between, there are gonna be a few time jumps, maybe just one time jump because I do want to focus on Jaune and his time as the Primarch of his Legion. Not only that, but also explore a more human primarch, as my editor has said that this opens up alot more opportunities to explore that

Yang: Then yes, I am

She’s scared. It has been some time since she felt this way. /This/ scared. Her hands struggle to stay steady. Ruby grips her weapon tight, her knuckles turning as white as snow. She takes a breath, trying to put on a brave face. But it does little to help. A hand is placed on her shoulder with a reassuring squeeze. Ruby flicks her silver eyes up and finds dark blue ones staring back at her.

Ruby thinks of the mission at hand. A large, dangerous Grimm has been spotted and is closing in on a village. It is far from the run-of-the-mill Beowolf. This thing is a threat, top of the class of dangerous things. There are not many hunters at the moment and much of this has fallen just onto Ruby’s lap.

“That’s why I am here,” Jaune tells her. “I always got your back. We have faced worse, haven’t we?”

Ruby chuckles a little. “Yeah. We have. Thanks, Jaune.”

Dragonslayer vibes from this song

Jaune: and by hell i mean a comic convention

[ID: Grayscale pencil drawing of Jaune Arc from RWBY and a Faunus lad holding hands and leaning on each other happily. The Faunus has long flowing light hair, pointy ears, a sharp tooth, and small dragon wings. He wears dark clothes with combat boots and fingerless gloves. End ID]

request from @deepvoidchaos​ feat. their RWBY OC! i got so carried away tbh 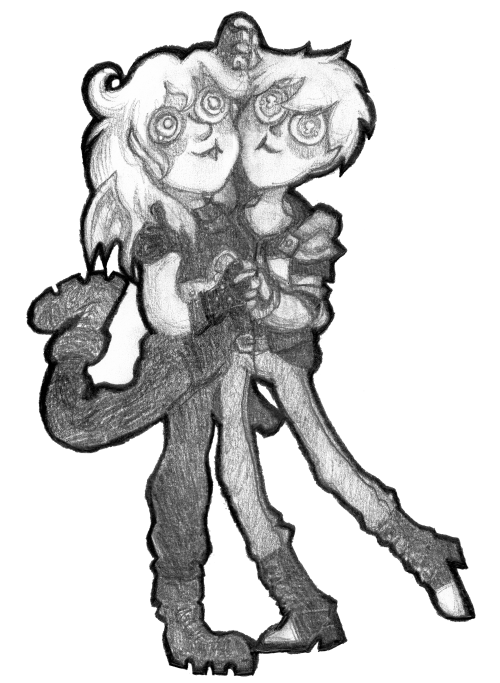 Oscar: *makes a bad pun for the first time*

Jaune (tearfully): so proud, my son

Ren: *rolls his eyes a bit but in a caring way*

Weiss: how dare you

*panics in not knowing who that is or how they died*

Hey so about Salem gouging Oscar’s eye out-