‘One single thread of gold tied me to you’ 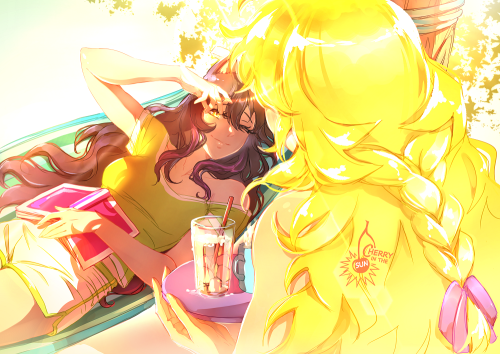 *Blake and Yang are gazing at each other*

Nora: Do you smell that, Ren?

Ren, sniffing the air: Smell what?

Weiss, barging into their room: Blake, I need to ask you—

Blake, lying awkwardly on her bed, flustered: What?

Weiss, suspicious: Is Yang under the bed? 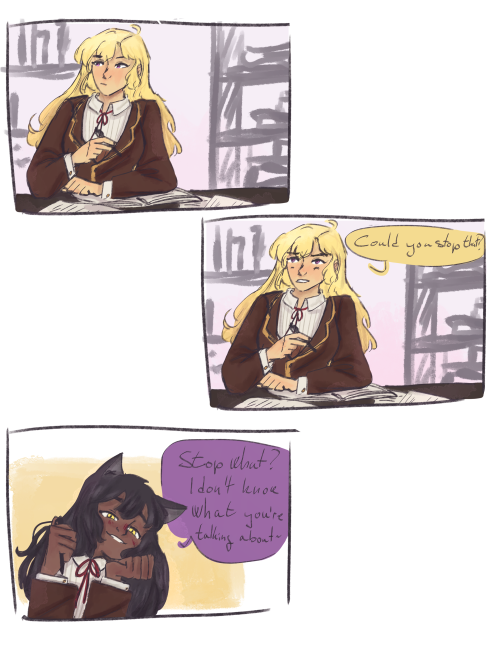 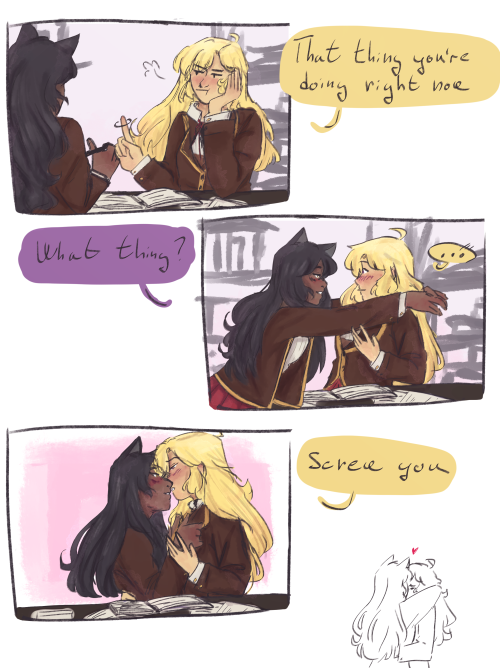 Commission that I just finished for @becauseihaveyou

Thank you for the opportunity to design Vacuo outfits for these kids!

Blake: are you flirting with me?

Yang: have been for three years now, but thanks for noticing

A new chapter for Mountaintop!

Blake continues to settle into life at Yang’s bar, but life and a way out of town come at them fast.

The Bees vs. Adam Part 2

i really need to see the bees sparring together

a blake for her belated birthday! 💜

Based on this post
(edited, to fix mistakes i left in) 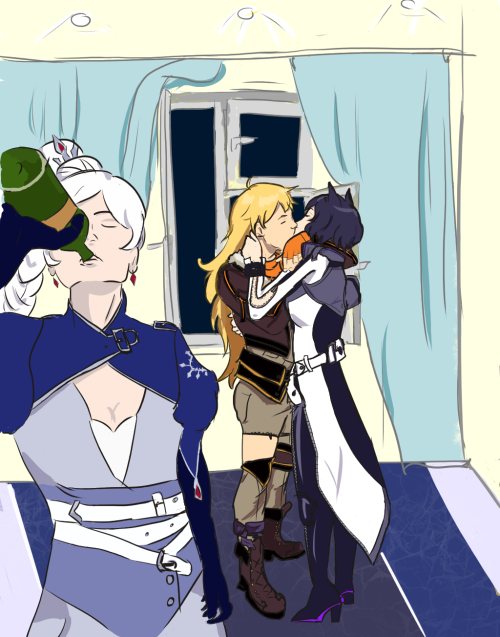 The manism, or veneration of the ancestors, was deeply rooted in the Arc faith. Grandma Salem introduced it, though she desired no worship from them, merely respect and love.

Jaune grew up on this very faith, and followed it for the sake of spiritual guidance and attaining the calm needed for his duties.

The manism shrine in Vale was ancient and barely visited nowadays, though Jaune had changed that with his own hands. Old coats of paint renewed, statues repaired or exchanged, the shrine was still quaint, yet it needed no overt opulence.

Which was why Jaune was befuddled by the various new additions to the shrine. Some incense, a few flowers, ribbons and vases, even Lien chips; the latter perhaps laid down by someone new to manism and without guidance.

It made him smile a little, since he knew the ancestors would appreciate the symbolic goft nonetheless.

Yang left a few flowers, unsure if it would be needed. Still, she heard through the grapevine - id est simply asking the guy - that Jaune came to this old shrine quite often.

Thusly, she knelt before the small altar and prayed to the Arc ancestors.

“Would you mind giving me hints on how to get that dick, with the guy attached?”

Ruby brought roses in a vase to the shrine she knew Jaune was regularly praying in. After placing them down carefully, she knelt and begged the spirits.

Blake had little she knew the ancestral spirits appreciated, so she brought colorful bows to the shrine. Decorating the small court of spirits with these strips of cloth, tied here and there, she finally stepped back and prayed like the others.

“Tell me, venerated ancestors, how do I convince Jaune to clap my cheeks?”

Weiss had studied the cultural intricacies of manism well. She knew that the dead needn’t much in terms of veneration, though remembrance was the most important. Ceremonies and keeping shrines of worship intact would pacify angered ancestors and summon their goodwill.

To truly make the rather dilapidated building fell hallowed, she brought and lit some incense close to the altar. Kneeling before it, she prayed, not for the first time in her life.

“Ancestors, please tell me…what are these dreams I am having about your descendant…?”

Pyrrha had no clue. All she could give were her Lien chips, as she had come here wholly unprepared for an impromptu veneration; she had merely followed Jaune, intrigued by his humming and his unusual path.

…what? She was his bodyguard for a good while, she followed him on most tours!

The cards clicking upon their landing inside the offering bowl, she clapped her hands together.

“Ancestors, heed my prayer. I, Pyrrha Nikos, ask for your permission to pursue Jaune Arc, regardless of his legion of admirers…”

literally that was the funniest moment in the show because they have may come up & tell rwb_ right to their faces that they’re sitting on their ass doing nothing in weiss’s cushty mansion, drinking fucking tea & rwb_ STILL HESITATE & DO NOTHING WHEN MAY TELLS THEM TO CHOOSE. how am i supposed to root for these people again when they’re doing nothing to fix the mess they created?

bruh. yang doesn’t need to hear about “a good mom relationship” because she had one, it was with summer !! now if only crwby would remember that summer rose didn’t just have one child & invalidate all step  /  adopted children that would be fucking great lmao.

also how great is kali rly? she let her 12 year old child run away to a terrorist organization & in the comics told blake it’s her responsibility as a woman to civilize, gentle & tame the men around her (& implicitly adam.) like. shit mom. fuck kali.