Whiterose weekend masterpost from the Butt

Thank you for organizing it, @white-rose-weekend

Weiss: “I don’t think my grandfather, Santa Claus, would be happy to hear…”

#honestly probably the most criminally not-talked-about aspect of RWBY, #assuming Willow is his daughter, #rwby, #weiss schnee, #nicholas schnee, #or is it nikolas schnee?
13 notes · See All
schneefamilyincorrectquotesAnswer

In fact there are older rwby songs that secretly display information about things, even the song time to say goodbye has some elements of future events

Ruby Xiao-Long was determined to chart her own path beyond the shadow of Raven Branwen. But with a time of peace coming to an end, and fate shifting with every flap of a butterfly’s wings, the path of mother and daughter may yet intertwine. Only time will say if it shall be as allies or foes.

Team JSPR lags behind Team BYRN, under the capable leadership of Bella Ebony. But is the enigmatic girl’s authority truly as unquestioned as it seems?

Weiss approaches Professor Peach with concerns about her team leader’s competence. Ruby can’t help but wonder if Team JSPR is already doomed to repeat the mistakes of STRQ.

haha remember when i redesigned v7 weiss? felt like drawin it again. (also changed it to a shorter skirt, seems like having it long would be really cumbersome in a fight) 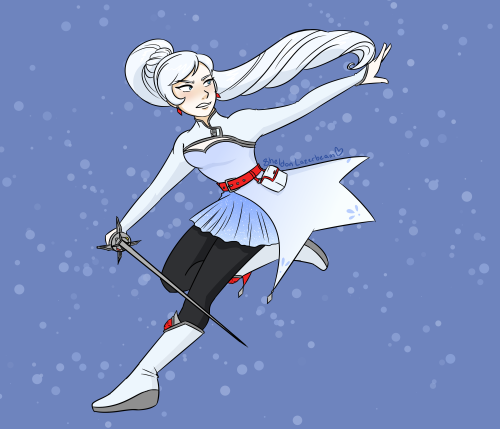 Winter: You know I hate it when you swear.

Yang:Just curious. I guess beating Adam was my hardest.

Ruby:Sup, What are talking about?

Ruby:*red* Oh you meant like conflict! Beacon was crazy-

Ruby:I was talking about his armor! We’ve spared before!

Weiss:We didn’t even say anything.

Yang:I was proud of your pun. That being said, where’s the boy?

Winter: Now that you’re dating my little sister we should get to know each other.

Winter: I’m twenty seven and I can’t swim. Now you go. Your age and something you can’t do.

Jaune: I’m twenty and I can’t take it anymore.

I wanted to draw a Weiss as a knight it was kinda inspired by the arma gigas! :)

[Ruby sits on the edge of the kitchen , looking over various sacks of beans, coffee, garbanzo, pinto…]

Weiss - Ruby Rose , what in the WORLD are you doing

Ruby - Oh….well I was talking about you to Yang, and then she told me less bean , so I think she wants me to get rid of our beans

Ruby - Weiss, which bean should we have less of ?

@white-rose-weekend I hope this isn’t too late?

Whitehorse weekend Day 2 and 3: Reunion / College AU, Waking up in the morning/ Loss and recovery @white-rose-weekend

I mixed the College AU prompt with waking up in the morning. They live in a condo because weiss hates the dorms 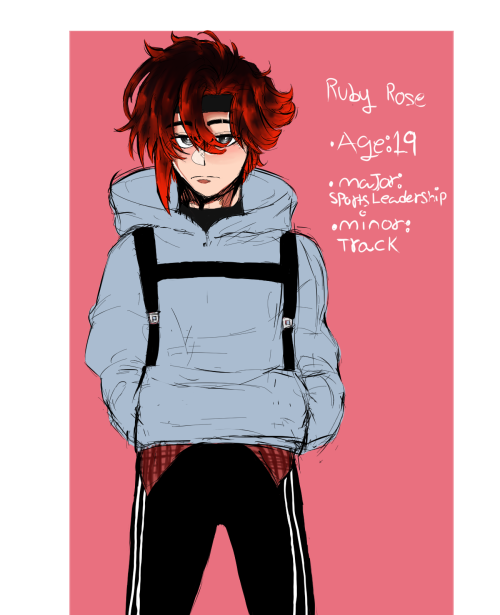 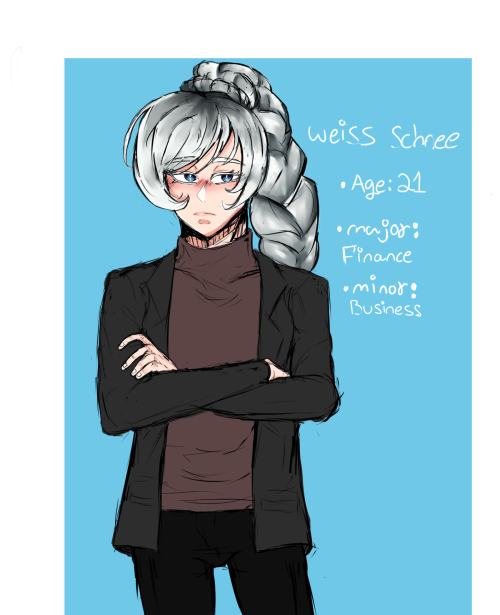 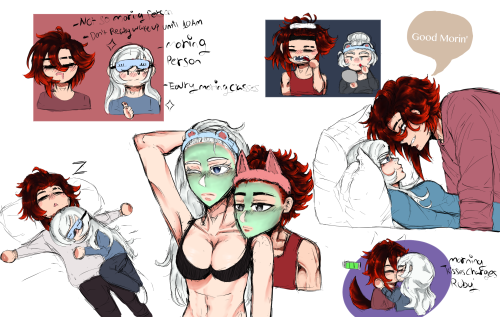 how beautifully strange it is … that in this tragic world filled with pain and suffering , two chess pieces would simply … walk away from the game.

Oh I think that’s p obvious at this point…

Ruby: I made cookes! They’re not the best though…

Nora: At least you tried, but never try again <3

Weiss: You can chase your dreams, just not this one ;)

Blake: There’s always room for improvement, just not in this room 🖤

When Winter entered their room carrying her notebooks and books she borrowed from the library she found her partner sleeping on the lower bunk, the one that at the beginning Winter had claimed for herself.
Ever since the two of them had first taken a nap together a while back, Winter would find her partner more often fast asleep like this on top of her bed.
She had concluded that Cassie simply couldn’t be bothered to climb up into her own bed whenever she was exhausted and while Winter had at first been annoyed at her partner’s level of laziness, she also couldn’t blame her for taking those occasional naps to begin with.
Not only were their schedules packed due to being in a special program, but Winter, during her own sleepless nights, had more than once noticed her partner suffering from nightmares that had her tossing at night. And while Winter could see her partner suffering, she also didn’t really know how to handle the situation.

Winter recalled how when they were both still children her younger sister would every once on a while knock on her room door whenever she had a nightmare.