Imagine if RWBY’s ships’ name were created like most anime ships. For example, for Witherose : Russ or Weby. For Bumbleby : Yake or Blang. Or Lancaster : Jauby or Rune. I don’t know what I’m trying to say but I just find it funny ! 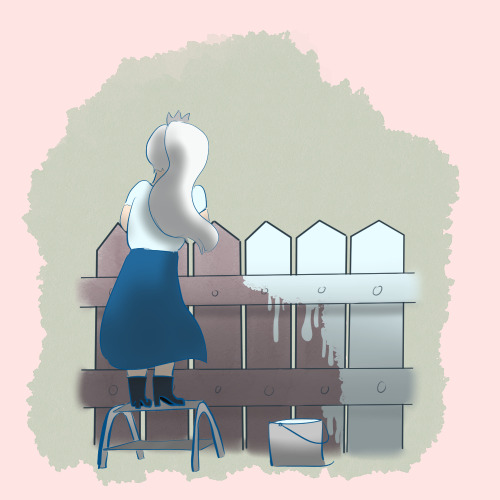 Weiss: Oh, and if you see Ruby, give her this message.

Weiss: She’ll know what it means.

Blake: Oh, Weiss told me to give you this message.

Ruby: The neutral face of displeasure.

Ruby: Are you the sun?

Ruby: Because I’m blinded by your beauty.

Weiss: Stop blaming me for your bad eyesight.

Ruby: *glancing over to Weiss and Jaune who just shrugged*

Qrow: “so… you are nailing ice queens sister and bunny sweatshirt all in one go?”

Qrow: “YOU KNOW IT KID HAHAHAHA” 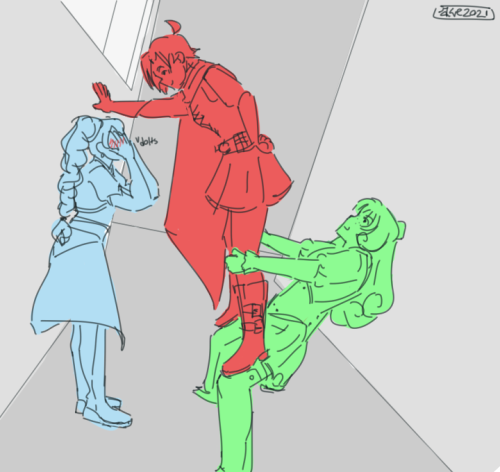 Ruby: Can I kiss you?

I’m opening three slots for commissions! DM me for anyone interested. Payments through PAYPAL only 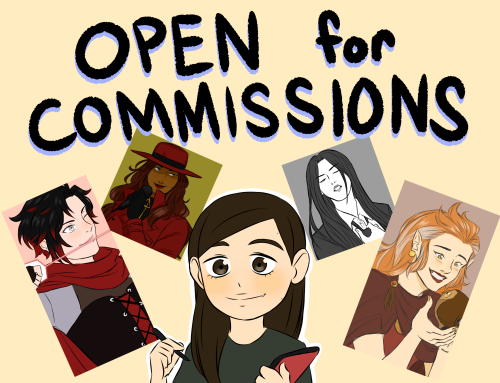 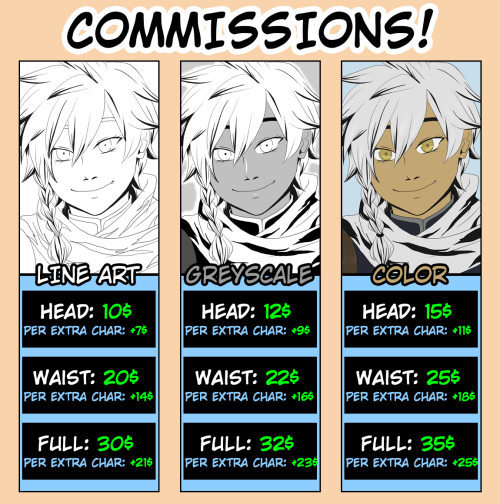 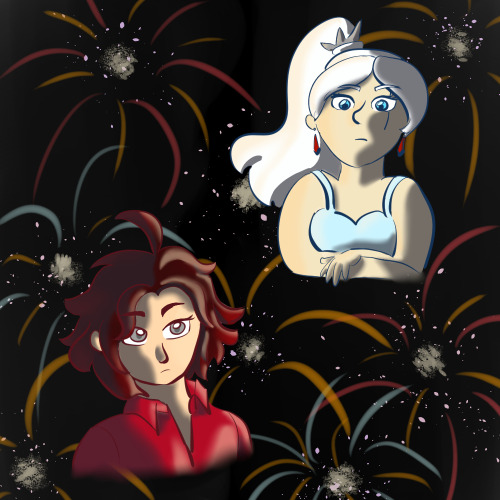 we love gorls in this house 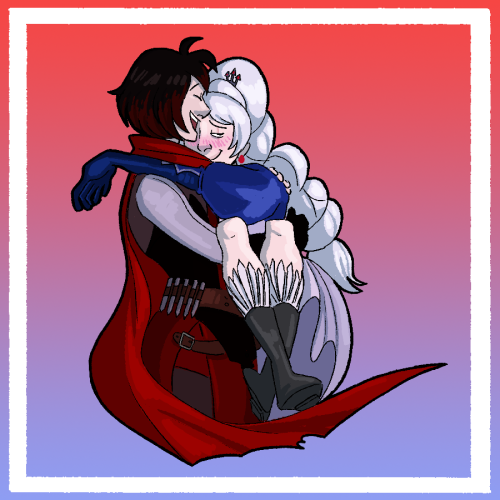 Ruby: I wanna wake up with you for the rest of my life!

Weiss: I wake up at five

Ruby: I wanna fall asleep with you for the rest of my life!

So I dug through my secret stash and I could bring you this:) Some sneak peeks of Ch1 and Ch2 of Swords, Magic and Monsters

For her credit, Ruby made good on her word. A good hour passed before she returned. Maybe she really took her sweet time, maybe it was Ruby’s lack of knowledge of the castle or maybe it was that Weiss didn’t tell her which gardens she will sit in

By the time the dark haired girl found her, she was calm again. After all, she loved sitting among the plants of the gardens. Despite all, it made her feel less suffocated and more like she is not trapped under his father thumb.

“Want this?” Ruby broke the silence and held a piece of pastry in her outstretched hand. “I don’t know what this is. But the kitchen maid said you love it.”

“Yes, I do.” She took the food.  Weiss smiled to herself. This girl really knew nothing else than potato and carrots. “Thank you and it’s a cinnamon bun.”

“Bless you.” Ruby said, took a seat next to her and pulled out a piece of similar pastry from the opening of her shirt. The heiress watched in horror. First: a common person dared to sit right next to her and even rub elbows! Second, did Ruby really pulled out food from her shirt?

Upon closer inspection, she realized Ruby’s shirt was stuffed with goods from the kitchen and she was hugging a rather large linen sack filled with several other items of food in her injured arm. The guardswoman had a wide variety of nourishment. All kinds of baked goods, a few pieces of cooked meat and many different kinds of fruits were now in her possession.

“Oh yeah, that’s the word.” Ruby said sheepishly. She moved to gobble down her sweet bun, but she was stopped by Weiss.

“I hope this one didn’t come out of your shirt.” She held the pastry up for inspection.

“No. I brought yours in there.” Ruby laughed her mouth half full, pointing to the sack of goods in her lap. “The kitchen people said you were picky, but I had no idea this much.”

“I’m not picky!” Weiss felt her temper rise again “Who said that?”

“Like I spit them out!” After swallowing the bite she was chewing, Ruby laughed heartily.

Weiss fumed, but let it slip. Ruby hummed an awful lot while eating, but the heiress suspected it was some peasant thing to not being able to eat in silence or keep table manners. She tried to ignore the fact that according to the example right next to her, the people of Solitas ate loud and stored food under their clothes and maybe worst of all, rubbed elbows while eating.

Other than these minor hiccups, she enjoyed her food. They ate in relative silence.

“You know, Weiss, I saw sooooo much food today.” Ruby chirped when she finished with most of her food. Weiss wasn’t sure if it was healthy to eat that much. “The kitchen was full of so many things! It was amazing. You own all the food in the world.”

The heiress listened halfheartedly. She carefully picked a handful of grapes as dessert.

“You can have the rest if you want.” She said, ignoring Ruby’s ramblings about all the amazing food in the pantry. She turned to the girl and gestured for her to have the food she won’t eat and she was greeted with a sight to behold.

The dark haired girl was staring at her with glistening eyes, much like when a dog stares at its favorite person in the world. Truth be told, Weiss was afraid she’d be victim of a tackle hug, but fortunately her guard seemed to get a grip on herself.

“Thank you, Weiss.” She said and gobbled up all the baked and cooked items, leaving only the fruits. Ruby wrapped a smaller portion into the linen sack mumbling something about tomorrow’s breakfast and some food for Penny.

With her provisions prepared for the next day, Ruby leaned back in her seat.

“Want to tell me what your problem was earlier?” the dark haired girl loosened her belt under the chest plate.

“Are you kidding me?” Weiss shot her a look of such malice.

“No.” She said after a few minutes of consideration. She made a conscious effort not to hold eye contact. Her uncle always said it just angers already furious creatures more. And Weiss was a very furious creature right next to her.

“Don’t you dare tell me you danced on my nerves all day without even meaning to.” The heiress chewed on her grapes, like she was working out all her frustrations on the poor fruit.

“Your culture is really confusing, Weiss. I need some time to understand the habits.” Ruby turned cautiously to the other woman “What did you expect from me?”

“Excuse me?” Weiss nearly spat out her half-chewed fruit.

“I excuse you.” Ruby said, but quickly realized it was a mistake.

”I’m not asking for a fight. I want you to tell me what you want. I don’t know your customs yet.”For her credit, Ruby held Weiss’ blazing gaze now. She had the opportunity to watch as the heiress sunk into deep thought and a few minutes later realization dawned on her.

Ruby discovered that the frowny face meant that Weiss was deep in thinking. She thought the small wrinkle between Weiss’ eyebrows and the twinkle in her cold blue eyes as she found the answer was kind of cute.

Her surprised face quickly turned into a scowl.

“You are not from Atlas, right?” Weiss asked curious.

“Close enough! I’m not even from the continent!” Ruby cheered and slightly turned in her seat to face Weiss. “Ask and I’ll answer your questions.”

Weiss took a minute to decide which one should be her first, but before she could ask away, Ruby raised her hand in a gesture unfamiliar to Weiss.

“But only if you answer my questions too.”

The two of them spent the better part of the afternoon sitting in the flower garden, telling about their own customs. Mostly Ruby talking in length, while Weiss kept herself to short and straightforward answers.

The huntress roared up at regular intervals, mostly on things that were so natural to the heiress, but apparently seemed to enrage the dark haired girl. Weiss made sure to enjoy the show she got gratis with her mid afternoon fruit snack.

“Why would someone do that?” Ruby seemed to hold against her confusion really bad. “This place is really all backwards….From all the things you told me so far, this is the biggest bollocks of all.”

Weiss couldn’t contain her giggles longer, needless to say, it only served to confuse Ruby even more.

“That’s it! I knew you were just pulling my hair!” Ruby laughed along with Weiss.

“For real now.” Weiss started with a dead serious expression “I wasn’t. You cannot call me by my name in public.”

At that, Ruby seemed to deflate. Now that Weiss knew the reason behind her guard’s unusual behavior it started to enjoy how needlessly expressive the other girl was. Of course, they only grazed the surface of the most of it, but she learned enough to have the outline of what to think of when Ruby opened her mouth to speak.

After she got to ask all her questions and got satisfying answers for all, it was her turn to give explanation. Or more like, give out the pointers and rules of public manners used among the noble folk of Atlas.

It was tiring to explain everything twice, but Weiss had to learn with great amazement that Ruby was a rather entertaining conversation partner. She was quick on her mental feet most times and surprisingly witty. Maybe a little simple minded about a lot of topics, but Weiss suspected it wasn’t ignorance, just a way to find some sense in it all.

Ruby often made good hearted jabs or tried to come up with something to lure a laugh out of Weiss, only to fail miserably. Weiss caught silver eyes glued to her, taking a close inspection. She knew that Ruby’s intent was purely to learn and copy how to talk and behave properly, without causing a disaster. If she had to be honest, she found it a little flustering. Just like now.

“Don’t look at me like that.” Weiss said and Ruby whined a little as a reply. “It is rude to do so.”

“Then what am I supposed to call you, if I can’t say your name?” The guardswoman pouted.

“You can call me ‘Your grace’ or ‘Your majesty’” Weiss selected the next piece of grape she would eat. “Also, I have a title.”

“What. Is it princess?” Ruby butted in, a mischievous glint in her eyes.

Weiss: I need some space

Ruby: YOU’RE REALLY BREAKING UP WITH ME?!!!

Weiss: YOU’RE TAKING UP ALL THE BED! I JUST NEED SOME SPACE TO SLEEP!!