Tumgir
AboutPrivacy Policy
AboutPrivacy Policy
Visit Blog
Explore Tumblr blogs with no restrictions, modern design and the best experience.
Fun Fact
Pressing J while looking at a Tumblr blog or home feed will scroll up on the page, pressing K will scroll down. This is helpful considering a lot of the Tumblrs feature infinite scrolling.
Trending Blogs
#heather things
lostiintheocean
Answer

Heather!!! Oh my dear fellow ‘bertan, this warmed my heart ❤️ even though we’ve only known each other a bit, you’ve definitely got me nailed pretty well! You are so kind and welcoming and are always looking out for others and taking care of people too, thank you for being such a good and kind and talented friend!

Things I will never accept:

as reasoning unless you give me specific reasoning beyond that.

Doesn’t work for me, sorry.

omg I’m getting so many prompts now and it’s AMAZING.

Thank you wonderful people sending me prompts ;w; I will work on them as quickly as possible!

Today has been largely disappointing and that really sucks…

#shes the kind of person who will stop what shes doing to help you and make sure youre safe even if shes not doing great herself#and recently people have tried to convince her that she sucks by spreading straight up lies about her???#idk man people are awful#but anyways#she is an angel and i lover her so much#olivia says things#heather
1 notes
low-blow-broski
Text

imagine if steve had followed billy around and kept a suspicious eye on him during s3 like harry potter had done with draco malfoy. like- dude. that shit would’ve been hilarious and he could’ve caught on and they could’ve helped him sooner. *shrug* just saying

Heather: “I think I speak for everyone when I say that no. We don’t want them to join.”

Steve: “We never said that, Heather.”

[I did it. I added Steve Nancy Laurie and Quentin to the blog ;>]

She gets her driver’s licence on Saturday.

On Sunday morning, she takes her first drive alone, and it’s to the last place she should go.

The roads are empty, the rest of Sherwood sensibly asleep in their beds. Last night was another sleepless one, bolting up in her bed with her hands clamped over her mouth and her whole body trembling violently, not stopping until she had paced the length and breadth of her bedroom about fifty times. She was wide awake by that point, too shaken by her nightmares to even try to go back to sleep. She sat against the window, head against the wall, watching her breath fogging up the glass, obscuring the perfect picture on the other side.

Seeing the “TD fandom lore” is so wild to me because 7 years ago I’d go into the tag to talk about mundane things, like how I thought DaSky was gonna be the main couple of TDPI and also hoping to see others headcanon that Jasmine was gay and I got hit with SO much drama that my 13yo self wasn’t expecting and this just happened SUPER daily. Like the tag was so active. And I’d just scroll through it like “hee hee isn’t it ironic a fandom about total drama would have so much drama?” while trying to find Jasmine x Ella art, just casually scrolling some intense shit

#this was like. my first fandom experience too#it was so wild??#im honestly glad that people can look back on it and laugh because hindsight is a beautiful thing#what i will say is there are many people from the fandom that i miss even though i didnt engage too much:((#i was younger than most of the fandom back then and im older than most the fandom now#i wish i was heathers - 17
5 notes
im-still-tryin-to-find-it
Text

1. An actual exploration into the aftermath of all the shit that went down with Cassidy.
- Dick Casablancas’ trauma & guilty conscience. He’s a piece of garbage but had so much fucking potential and I’m never gonna get over how the writers fucked up his entire life and then spend ten minutes max exploring him in the aftermath.
- Mac’s trauma & intimacy issues. I’m never gonna forgive them for deleting those scenes in 3.04 with Wallace realizing Mac is uncomfortable around guys she doesn’t know and even him when he puts his arm around her. Release that footage cowards. Ily Mac you deserved so much more.
- Not writing Gia out and actually exploring her trauma. God she could have been so interesting… I’ve written some stuff about it but I feel like she would actually feel bad for Cassidy, like… while Dick feels guilty that he didn’t notice Cassidy was being abused, Gia would probably feel guilty that she didn’t notice her dad was abusing all these boys… and she had a little brother, so god knows what her dad did to him.
- Logan’s guilt regarding Cassidy’s suicide is something that wasn’t even touched on?? Like he was there when it happened and literally couldn’t answer when Cassidy asked him why he shouldn’t jump…you can’t tell me that didn’t fuck up this already fucked-up kid.

2. Not forcing Piz and Veronica together
- this one is self-explanatory but. Logan and Veronica were so endgame. I get Piz’s puppy-dog crush on V, but to actually have them end up together??? Logan did not save Veronica’s life time and time again for this kind of treatment.

3. Not killing off Kendall
- No one else probably cares about this one but I am a Kendall stan. she’s got that Julie Cooper energy and I would give my life for Julie Cooper. Let Kendall skip town with her eight million dollars and live it UP.
- (Or stay in town, get a divorce and actually be kind of a good stepmom to Dick? This is just because I wrote that one fic but Mom Kendall is now near and dear to my heart. not to plug my own shit but fic link here)

4. Appreciating Parker Lee
- I fuckign love her
- sunshine girl… i miss her so much

5. Parker and Mac as girlfriends
- I forgot I shipped this until two seconds ago but omg it’s valid
- I just think they’re neat

6. Not just entirely writing out Duncan Kane
- Unpopular opinion I actually really like Duncan?? He’s doing his best.
- I would like to order one (1) interaction between him and Logan regarding the hit on Aaron Echolls.
- They were best friends in S1 and I deserve more!!

7. More Logan & Heather!!!
- Ok 3.13 has all my rights but Logan promised Heather they would play Mariokart together once a week and I would like to see that please!!

8. Everyone just hanging out and having fun??
- They’re college kids! let them hang out and be happy!
- Especially during that last stretch when Veronica wasn’t actually solving any major mysteries??
- Just like… Wallace and Logan and Dick and Mac and Parker hanging out… their overall dynamic is something we deserved.
- Just playing video games in Logan’s suite… idk just hanging out!!! having fun!!!
- This is entirely based on this fic it’s maybe my favorite VM fic… ever? go read it omg.

9. I don’t remember very much about S3 Weevil and I think that means more Weevil scenes/plotlines are required
- Finally let Logan and Weevil resolve their shit
- I just think canon bisexual Weevil would be neat

10. Dick actually fucking apologizing for leaving Veronica passed out in a room with Cassidy & telling Cassidy to rape her
- I would feel much less guilty about enjoying the character so much if he apologized for the worst fucking thing he ever did
- i know they changed his character around because Ryan Hansen was so likeable but if they could’ve actually addressed his Biggest Fucking Flaw in the process, that would’ve been dope

Anyway I’ve revoked all of season three’s rights. Wish I wasn’t two years old when it aired so they could hire me to write a better, gayer version. Thanks for nothing Rob Thomas

#Charlie rambles to the internet#if anyone has a heathers boot they wouldn't mind gifting#please?#or I have a few things for trades#if you'd like#we can talk in dms#gotta figure out how to tag this#heathers#heathers the musical#gonna try that specific combination of words
13 notes
papz
Photo

they could have turned out good, but now we’ll never know 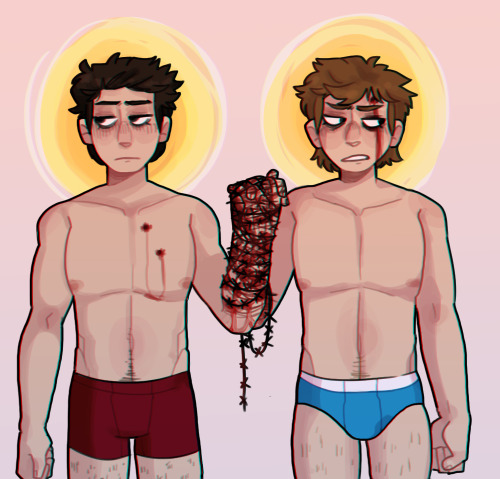 #this is a redraw of something i made like. when i was 13-14#but im not linking the original because it kind of became its own thing as i was drawing it. so#heathers#heathers the musical#ram sweeney#kurt kelly#blood#bullet wound#barbed wire#religious imagery#please dont tag as ship#my art
125 notes
the-bugs-under-ur-skin
Text

(I prefer writing hc’s, but if you want a longer story specify pls!!!)

I WILL NOT WRITE NON-CON!!!

a few fandoms i’ll write for (message me if you want on another):

-You and Me and Her

-the cabin in the woods

-inso’s law / my life as an internet novel

I wanna write some more in my free time and I don’t yall to be stuck with me just writing Lanskiano so here’s all the shows/movies I’ve watched/I am currently watching watching.

I will write for any of these shows or movies. They can be ships or character x reader. Requests are open at all times, just make sure when you send one in that you identify what genre and pairing you want!!

- A Nightmare on Elm Street

- Back to the Future

- Interview with the Vampire

- Once Upon a Time in Hollywood

- The Boys in the Band

- The Wolf of Wall Street

Another imaginary outfit idea. This one is heathers inspired…

#my art#doodle#original art#clothes design#outfit design#punk#altfashion#80s#heathers#heathers film#lots of things going on here#the croquet balls were bc heathers :pensive:#but also bc I saw and 80s shoulder pad jacket n was like. I want this#n then it ended up like this..#n the hair is me trying to convince myself to get a mullet#which I’m.... this is kinda convincing...#self portrait
6 notes