#:res ending feels kind of out of tone with the rest of the series but i am a big fan of him getting to settle down and be a great uncle :)#tg
0 notes
luna--cat
Answer

honestly I was a little bit surprised by this ask! I personally do not identify as agender or nonbinary so I was really afraid to offend somebody cause I might end up sounding ignorant rip so I decided to change it to where juuzou is just a femboy and really in touch with his feminine side rather than being agender/nonbinary. I’m so so sorry it’s not what you wanted exactly but i also don’t want to spread misinformation so I’m just going to stay on the safe side! if you wanted something different then feel free to send another ask in!

juuzou being non toxic and adorable

Heeeeyy if any of you are still here. I’m alive and will be rereading tg+tg:re somewhere after my exams finish next month. So get ready for some possible new content??

Now you might ask “Is said content just gonna be some more shitty memes?” You sure can bet on it.

Feel free to send me any tg related asks, till then. Seriously anything, plz🙏🙏🙏

So I finished Tokyo Ghoul. I started it a while ago and stopped because life got in the way, but now that I’m finally not in school anymore (god bless) I can watch all the anime to my heart’s content.

I only WATCHED Tokyo Ghoul. Don’t get me wrong, I prefer reading manga to watching anime, but I’m occupied with a different ongoing manga series atm and it’s hard for me to focus on more than one manga because my brain is incapable of multitasking.

Tokyo Ghoul (this includes Re) was good overall, however that last season, all of Re, was just kind of out of place to me. But that’s personal preference, I just don’t like having to get to know new casts when a series is halfway over. The ending was okay. I always want a happy ending for everybody in a story and that’s what it was, but it felt weird and out of place in comparison to the first two seasons. I feel like Rize’s arc/situation was out of place, but after doing some research I believe I would have gotten more information if I had read the manga instead of just watching it. But as an anime, it was very confusing. There wasn’t really an explanation of what was going on with her. I mean it was indicated that she was being used to create more one-eyed ghouls, but there wasn’t much of an explanation for how. After reading about her I learned that she was basically being tortured. She was being driven insane and losing sight of reality as she was being farmed out to create these ghouls, but it doesn’t show this in the anime, and therefore you miss a lot of information that contributes to the ending–where Rize was the dragon, and how sad her death was meant to be. In the anime it was just like, “Oh, it’s Rize, okay bye”. It felt like there could have been more to it, but that’s okay. A character I would have loved to see more of was Eto Yoshimura, the real one-eyed owl. I wanted to see more of her, but she disappeared from the show as quickly as she came in. Overall, I’m glad I watched it, and I definitely recommend it if you enjoy happy endings–regardless of how they happen.

+ listen in my mind i’m sitting on a log in the middle of the pine woods, sharpening my sword and impressive collection of knifes 😫💓

+ MA’AM I DEMAND ONE SMOOCH

send me a colour

“i want to fight you in the most homoerotic way possible”

Who did I use to be? 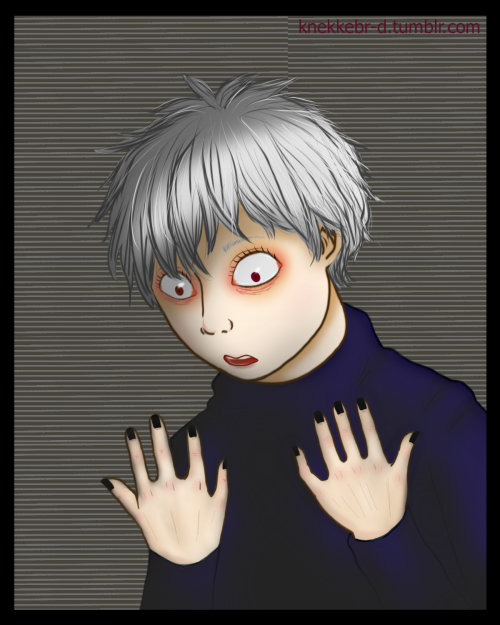 + i have a STICK for practicing but i’ll have a sword one day:’)

+ Emma my heart is yours.

+”wait u of all ppl don’t own a sword???” god if i truly give a vibe that i own a sword i can die peacefully i g, i always wanted a collection of swords on my wall and i’ll have it one day!!

hes such an asshole i love him

So I noticed something…

Fights against his instincts to eat people.

Becomes a badass after accepting who he is.

Doesn’t know much about his dad.

Mother dies while he is in elementary school.

Drops out of school.

In love with a rabbit.

Best friends with the protagonists since elementary school.

Always there for them.

Smarter than they look.

The fandom absolutely loves them.