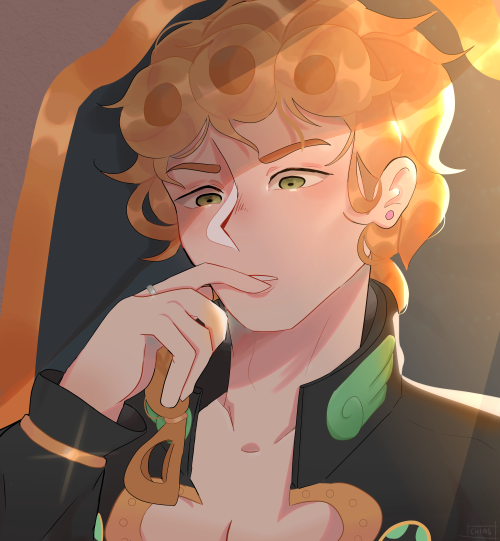 spoilers if you squint reall hardddd

don giorno giovanna what fancy suits will he wear

Part five spoilers???? Idk if it is but just in case!

Don’t worry, its not dumb at all! Long as its a problem, there should always be advices given to help, and is always important :]

Its kind and thoughtful of you to be willing to do such a thing for others,anon. But do understand that there are certain boundaries set and lines have to be drawn if it is interfering too much with your life and most importantly, your health!

Remember, its not selfish of you to take care of yourself ,especially after being worn out from helping others. You shouldn’t feel guilty at all, alright? So yeah, draw a line, set boundaries. And take the time to recharge yourself, make up for your lost time in your hobbies and interests!

imagine: You just laying on Giorno’s chest at night as you use your phone while Giorno reads a book. Basically just you two relaxing together, ‘nuff said.

This my current phone wallpaper!

So I ordered these Vento Aureo mini figurines off ebay, right? They arrived today, and when I opened them I was surprised to find that the boxes were included too, they were just folded, you know

And it got better

“What the hell are you guys doing?! “ 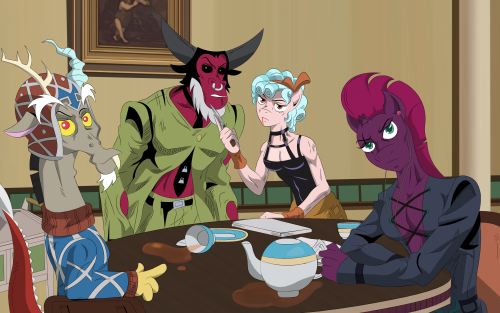 Thank you for your request, my dear anon💚

I’ve already written everything I could in yandere headcanons for Mista, so I decided to write something different, hope you don’t mind. The ending came out a little strange, that’s because I ran out of ideas at the end and didn’t know what to add😅 and yeah, I need to start giving names to my imagines and scenarios😢

The sound of a key, turning smoothly in a lock, pierced the space of a dark room. This sound repeated four more times before the door was finally unlocked

With a quiet brittle squeak, a heavy wooden door opened up, showing a silhouette of a young man. He was standing against the light and it took a couple minutes for S/o, that was sitting in complete darkness, to get used to it. When their eyes could finally see, they looked up on this man’s face - it was a handsome man, his black curly hair was hidden under his favorite red beanie, he was wearing black skinny jeans, that emphasized his well-trained leg muscles and a baggy black sweater

His face was just as handsome as his body - dark eyes were squinted from a smile, dark eyebrows furrowed a little. But the most attractive feature of his was his lips - pink and plump, just like a girl’s one. They were stretched into a wide smile, by this look S/o could understand, that Mista was really happy to finally see his darling

- You know that you can turn the lights on, right? And why are you sitting on the floor, you wanna catch cold? - his soft deep voice filled the whole space, interrupting the silence, hovering heavily in the room. Mista waited for a few seconds, wanting to get a response, but he grunted quietly, annoyed by S/o’s muteness

- Oh, c’mon babe, I’m so tired from work, finally getting home, and this is what I get? Weren’t you missing me? - Guido pushed his lips into a thin line, his eyebrows furrowed and S/o could clearly see that the man started to get angry

- You locked me up in this room for the whole day. For the whole day I was sitting there, all alone. You were the one to lock me up here, and you think that I’m happy to see you? - Mista’s black eyes narrowed a little, impish smile plastered across his face. There was something in his sick head, that made him really satisfied, and this sudden change of Guido’s mood freaked S/o out even more

Guido’s face softened a little, S/o looked so pretty when they were mad. He walked in a room, turning the lights on, what made darling squint. Man sat on S/o’s bed, looking lovingly on their malcontent face

- You’re upset because I left you alone? You felt lonely without me? - Mista murmured softly, sitting on the floor next to his darling, embracing them and laying their head on his chest. He lowered his face a little and placed a loud peck on S/o’s forehead. He ran his fingers through darling’s hair, gently massaging the skin of their head

- I missed you too babe. I couldn’t think about anything but you, - Mista snuggled into S/o, closing his eyes and taking a deep breath - the air in this room smelled like darling, and oh god, did he like it a lot

In moments like this, when Guido was so sweet and tender, hugging S/o so softly and whispering words of love into their ear - it felt so normal, like they were teenagers, enjoying their first real feelings towards each other

In moments like this, S/o almost forget tha Guido is a psychopath, ready to kill everyone who looked at them

In moments like this, S/o almost forget that this freak kidnapped them and keeps them locked in his house, situated somewhere in Naples, but they’re not even sure where exactly they are

So, maybe they should give in? Pretend like everything’s okay and they’re just a normal loving couple, living a normal life together. Maybe, just for a few minutes…

Determinazione on repeat or however you cope with loss 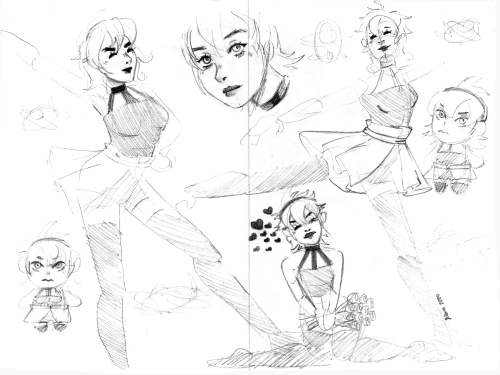 Ok, going well so far. Might as well add the separate headcanons about Gelato.

Ok, so posting the headcanons separately actually worked o_o guess the original list https://oddlovergirl.tumblr.com/post/640683672218009600/sorbet-and-gelato-headcanons really is too long. Anyways, let’s get this show on the road.

Ok, so I posted a original list of Sorbet and Gelato headcanons https://oddlovergirl.tumblr.com/post/640683672218009600/sorbet-and-gelato-headcanons yesterday, but for some mysterious reason, it didn’t show up in the tags on main Tumblr except in my dashboard. I thought it might be because the list is so dang long, so I think I should divide the headcanons into three separate posts just so they can be seen in the main tumblr tags. I might as well try it out.

-           They’re both ex-serial killers who had started murdering in late adolescence, with difference in motivation (Sorbet wanted to murder people so he can collect their blood for his paintings as well as steal their valuables to sell off to earn money; Gelato simply wanted company by killing people so they won’t “leave him all alone” like his grandparents upon their deaths).

-           They are also cannibals (Sorbet took it up as a way to save on food expenses while Gelato decides it’ll be his main meat source since he lives in the middle of the countryside, usually feeding the organs he considers inedible to his family’s chickens; chickens are omnivores, so it’s not unusual to be feeding on human flesh). They’ll occasionally steal a dead mook they recently kill (using Tears of Pearls) to use the dead body’s flesh for meals.

-           They met through a letter correspondence that lasted for six months.

-           They used to be part of Passione’s Sezione Gestione sistemi informatici (to make it short, I’ll just call them the Intel Team) led by Cannolo Murolo, with Illuso joining their ranks a few months later. After La Squadra Esecuzioni was formed in 1995, he, Gelato, and Illuso were transferred from the Intel Team to the Hitman Team as La Squadra Esecuzioni needs a few people from the intel team to gather info on their would-be targets for assassination (as for Sorbet and Gelato, they’re former serial killers who have used their Stands for their murders and evade capture).

-           While their teammates refer to them by their surnames, the two only call each other by their given names. No excuses.

Some Fem!FormaGhia for the evening?

Something i doodled to wind down this evening listening to Her by Eery. Again.

Ok, so I decided to randomly search up ‘why do oranges symbolize death’ on google, and I discovered that there’s deliberate orange symbolism in The Godfather franchise, with the oranges as omens of death and betrayal in The Godfather world.

That made me think of Vento Aureo (The Godfather is one of Araki’s favorite movies), and that made me think of Narancia, whose name is a combination of two different words both meaning “orange” in Italian and Spanish and is associated with the orange colors. Out of the members in Bucciarati’s team, Narancia has the highest kills (unless you count Fugo in the dubiously-canon novel Golden Heart, Golden Ring) in the main story. To be specific, Abbacchio had 0 kills (so does Trish), Fugo had only one kill in the form of Illuso (unless you count GHGR and Purple Haze Feedback), Mista had about two kills (Carne and Doppio), Bucciarati had three kills (Prosciutto, Pesci, and Secco), but alongside Giorno (who killed Polpo, Melone, Ghiaccio, and Cioccolata and sent Diavolo into a never-ending death loop), Narancia had about four kills (Formaggio, Tiziano, Squalo, and Risotto), which is still a little high. Besides the fact that Narancia’s backstory is somewhat similar to that of the Corleone family lawyer and adopted Irish son Tom Hagen, the orange death symbolism from The Godfather may even be part of the reason why Narancia died in the coliseum…

Remember that though Narancia may truly be a cutie pie, he is still a mafioso with a fuse far shorter than Fugo’s and will definitely fuck you up if you ever rub him the wrong way. 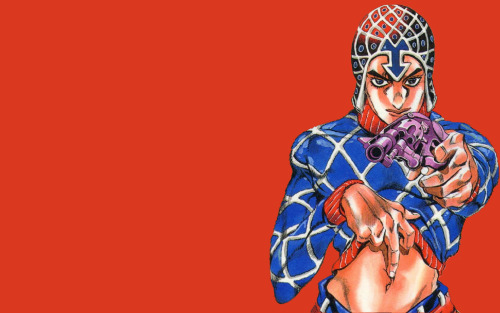