Made matching icons and headers for some of my favourite underrated Weiss ships. 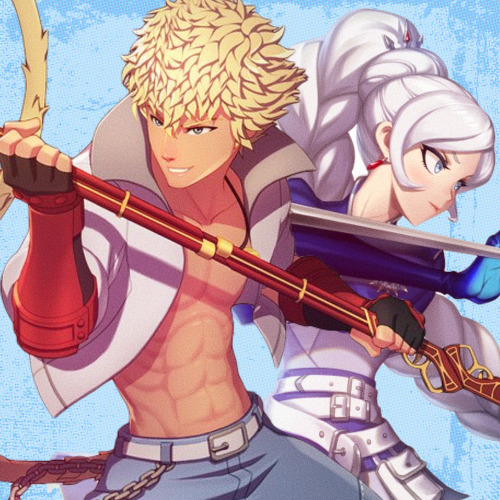 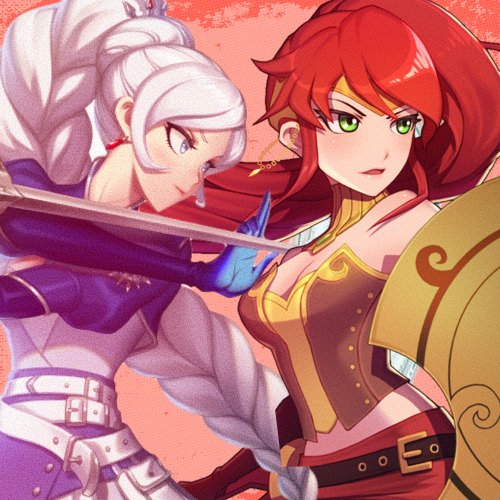 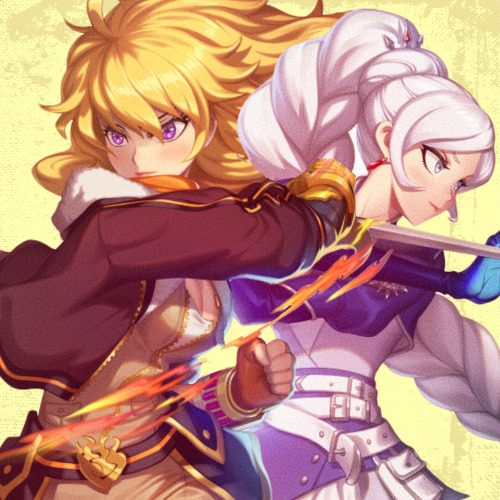 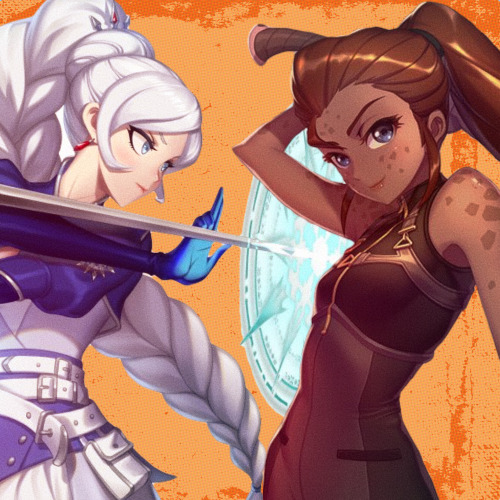 Weiss: *walking into the front room* Are you sure we have everything?

Yang: *nodding* There’s no need to be this worried over a single trip.

Weiss: But it’s an important trip and I want to make sure everything is right and-

Pyrrha: *putting a hand on Weiss’s shoulder* It’s okay. I know you havent seen your family in a while and now you have the opportunity.

Weiss: I’m still nervous. What if they dont like what’s going on? What if they think this is all super weird?

Yang: Weiss, it’s your mom and sister. They’ll understand and love you no matter what.

Weiss: *taking a deep breath* You dont know them that well…

Pyrrha: I’m sure they’ll still be thrilled to meet your girlfriends.

Yang: *kissing Weiss’s cheek* No buts. We have everything packed. Your mom will understand and be happy for you.

Pyrrha: *nodding and taking Weiss’s hand* Now, lets go meet your family and tell them that you now have two wonderful girlfriends that are taking care of you.

Today, after that “it doesn’t matter who you ship Weiss with because we can all agree that girl isn’t straight because she was a simp for Pyrrha” post I made an eternity ago, I bring you:

I’m more of a Whiterose girl but it doesn’t matter who you ship Ruby with because we can all agree that girl isn’t straight after that scene when Emerald complimented her and she blushed and “ajdjskds shut your stupid little faceasjkaksbak”. And honestly same. 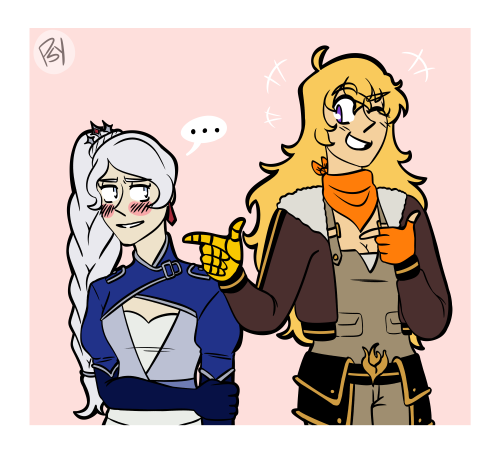 Weiss: *sighing* N-no… I cant quite get this one move right…

Pyrrha: *walking to the training ring* So what exactly are you trying to do?

Weiss: *pulling up a video that Winter had sent her* I’m trying to do this.

Pyrrha: *nodding and using her hands to adjust Weiss’s form* Try moving your hips like this and put your leg out like this.

Weiss :*feeling a shiver go through her body as Pyrrha moved her* R-right.

Pyrrha: *smiling once Weiss got into position* There you go. This should help.

Weiss: *blushing a bit* T-thanks. That definitely helps now that I know how it feels.

Pyrrha: Is something wrong?

Pyrrha: Your face is a bit red.

Weiss: *starting to put away her training gear* Y-you know what? I forgot I needed to go study for a test. Thanks for helping though!

Pyrrha: *watching Weiss rush off* Well, that was a bit odd.

#rwby, #skits, #weiss schnee, #pyrrha x weiss, #pyrrha nikos, #touch starved weiss, #this originally started as a one shot, #not sure how it became a series, #schneekos, #enjoy some touch starved and gay panic weiss
71 notes · See All
moistmailmanText

Yang: Holy shit! Look at the time! We’re going to be late for class!

Pyrrha, blushing while being dragged away: W-wait, w-wha…..

I’m always down to dish about Schneekos.

Honestly, imagine these two actually getting to interact. I feel like these two can relate to each other, with being put atop these high pedestals. Then imagine Weiss learning that Pyrrha is more than just a brilliant fighter. Also, Pyrrha learning that there’s more to Weiss than just being a Schnee.

I think their relationship, whether it be romantic or platonic was a missed opportunity for sure. Having these two interact with one another just would’ve been great. They could’ve gotten to know each other better and become close. I just think that their possible dynamic and the development that we could’ve gotten for them would’ve been neat!

#schneekos, #rwby, #asks, #submissions are always welcome!, #anonymous, #thanks for the ask!
25 notes · See All
good-sapphicrwbyausText

Real talk, Schneekos was a missed opportunity by the writers. No, I do not take criticism.

Summary: Pyrrha’s the Fall Maiden, but it’s come with a cost. Destiny has more in store for her than isolation, however.

#rwbyrarepairweek, #schneekos, #pyrrha nikos, #weiss schnee, #yeah i know yet another weiss ship lol, #character death cw, #past arkos, #fall maiden pyrrha au, #this may be the basis of a future fic series, #maybe some poly npr if you squint?, #i'm sorry jaune i love you, #but this is a prompt that calls for angst my boy, #i'll make it up to you i promise, #this got way more pyrrha-centric then i intended but that's what happens when i write pyrrha i guess
9 notes · See All
moistmailmanText

Weiss: I catch myself thinking about Pyrrha a lot.

Jaune: I do sometimes too. Like, how did I not recognize her from pumpkin’s Pete’s? It baffles me. I love that cereal. And also—

Weiss: No, you misunderstood. I think about her in a gay way.

i miss them so much you have no idea 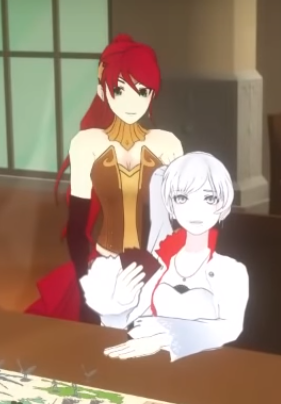 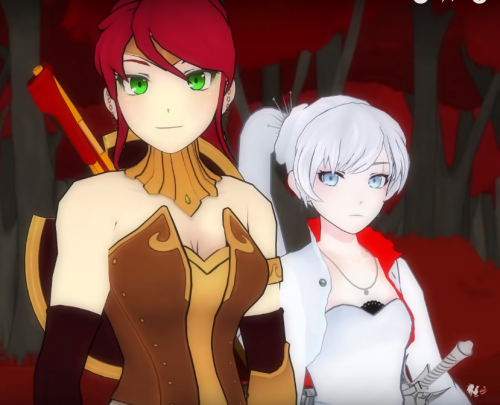 Fantasy AU where Weiss is an princess of a kingdom, and her father is a giant racist asshole (surprising, I know) that absolutely hate anyone that isn’t a human, rather it be elf, goblin, vampire, werewolf. You name it.

Although one day, when Weiss was being escorted to another kingdom for a marriage contract (arranged by her father obviously), her carriage gets ambushed by bandits. Weiss thought she was a goner until she gets saved by a tall redhead orc woman. The princess watched in amazement as the orc dealt with the bandits with ease, before the redhead showed her attention to the passenger.

It would be a lie to say Weiss wasn’t scared at first, who wouldn’t be when they witness a very tall muscular orc slaughter a bunch of bandits? Although that worry soon got replaced with a blush when the taller woman smiled at her comfortingly, before finally speaking for the first time. “Hello, are you alright? You’re not hurt, are you? I’m Pyrrha by the way.“

Weiss tried to keep eye contact with her, but that grew hard from the orc’s lack of armor, covering up only what she needed too, meaning her muscled body was in display for the princess to gander at. It also didn’t help that the beauty had like 3 feet on the girl, completely dwarfing her. And it most certainly didn’t help that her tongue became dry and talking seemed like a privilege to her now.

Finally her words came back and she quickly thanked her savior, buying her lip as she looked her up and down, legs feeling wobbly.

1.) She rather die than marry whoever her father set her up with

2.) She has a thing for tall girls buff girls

3.) She is absolutely a bottom

In Weiss’ opinion, her father can go suck a dick, because she wants this Orc lady to rail her for the rest of her life.

Her face burned. “Sorry, I…I didn’t mean it to come out like that.”

“But you did mean it,” Pyrrha said, softly, recovering a little. She lifted her hand and water streamed down her wrist. “Didn’t you?”

“I…” It was just impossible to lie to those eyes. They were the same warm green color as sunlight through leaves, not an ounce of dislike or meanness in them, just this endless, quiet acceptance of all that you were. “I meant it. But—”

Pyrrha shook her head. “Then don’t feel sorry. You shouldn’t.” Now she did reach out and touch her, taking Weiss’s hand in both of her own, her fingertips barely touching her, leaving drops of water on the back of her hand. “I admire that part of you, you know. I’m a little jealous of the way you get angry. The way you’re honest without even trying.” 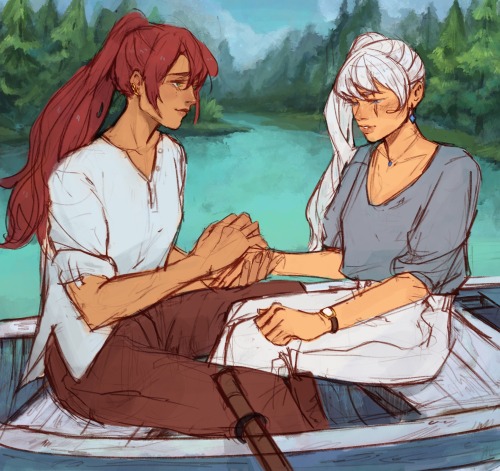 Pyrrha: I tried to go to bed early last night but couldn’t get a lick of sleep for some reason.

Jaune: Maybe someone was thinking about you?

Pyrrha: Who do you think would be thinking about me at 9 o clock at night?

Weiss: *waking up in a sweat*

Weiss, shaking her head while blushing: Nothing! Nothing at all!*Clears throat* A-anyway, I-I gotta go take a shower. A very long shower.

Yang: You already took one tonight though.

Weiss, walking into their bathroom: I sure did.

Summary: Weiss just wants some peace and quiet. Nora has other ideas.

Pyrrha - Weiss….why are you always so foul

Weiss- Everyone I know only wants to get close to me because my family’s money or prestige , so it’s given me trust issues

Weiss- [pulls out chair next to her]

[Pyrrha sits down and  scowls as well]