Sometimes a group of friends is an overly fertile elf, an emotionally stunted bastard, a very good boy, a scramble man, a bag dad, and one (1) Big Bed/Coffin and I think that’s beautiful

Mahla again as she continues to age, the dark powers slowly corrupting her 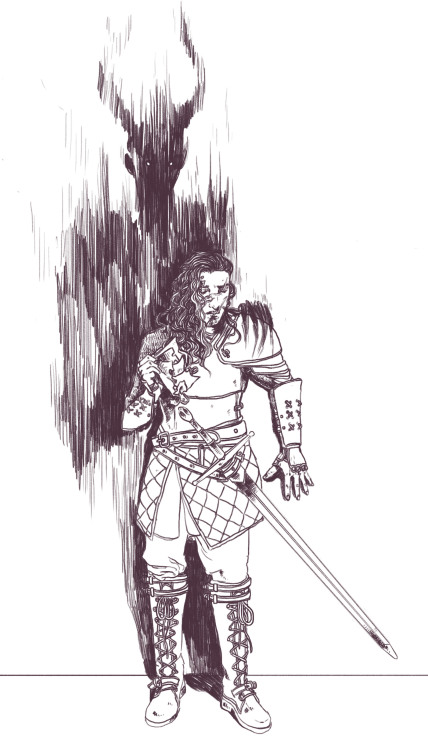 I’ve forgotten to show you fine folk here on tumblr the Shadowfell Unicorn Man I’m working on! In my homebrew D&D world, most fey-like creatures that can be found in the Feywild have a Shadowfell counterpart, and I thought spooky unicorn people might be a rad idea so uhhh yeah. Him.

So excited! Just got back a commission of my muse by the amazingly talented @arnaerr

Check out her page, lots of awesome art!

Y’all ever look at your guardian… and just go

question for DMs with more experience than me: how do y'all run the shadowfell? i’m really interested in a campaign that’s set partially in the shadowfell and feywild, but there’s so many more resources on the feywild

you flesh out a mini-adventure featuring a displaced portion of the Shadowfell appearing in the Material realm.

murph: we talked about this on the short rest before, but, um, growing up catholic I, um, don’t have any of the, um, cool stuff that comes with religion like, um, hope.

Having finished the last page of Shadowfell, I closed the back cover and was faced with an astounding review:

“For those who wish that Tolkien had explored the character of Aragorn more deeply, Marillier provides the next best thing.”

#book thoughts, #shadowfell, #what even is this comparison, #someone plz explain, #aragorn, #tolkien
1 notes · See All
maxhpartPhoto

Dull-colored from the Shadowfell he lives in (and always has), Phantus tries to have as much color as he can in both his clothes and acquaintances. He dresses himself in whimsical, gaudy garb and can be described as “relentlessly optimistic”. Here, Phantus is beginning to cast his signature spell, dimension door, which is helpful for surprise entries and speedy exits. Oh, and watch out for his war dulcimer—it has a hidden blade in the bow.

Under the cut: a brightly-colored variant. 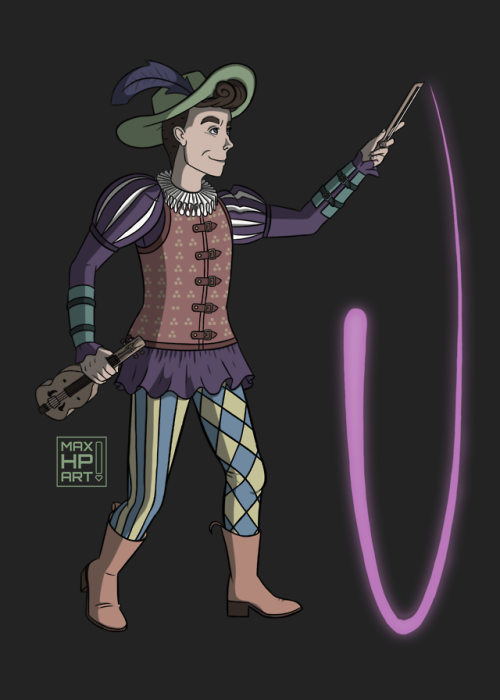 Shadowfell by Juliet Marillier follows 15 year old Neryn, homeless and on the run with her father after their village is destroyed. Neryn’s life is difficult and full of uncertainty and then her father does the unthinkable, he offers her up as a prize in a card game in order to get more money to drown his sorrows. Terrified and alone Neryn finds herself being won by a young man named Flint and on her journey with him she learns of Shadowfell, a mysterious place where rebels are meeting to overthrow the king and return their kingdom to peace and prosperity once more. Neryn wants to go there and with her powers she may be just who the rebels need to secure victory but can she trust her companion to help her or are Flint’s loyalties tied to the king and his court?

This was a great first book and a great introduction to this new world. Marillier has constructed an intriguing and complex kingdom, seemingly inspired by Celtic and British mythology. Neryn is a lovable and compelling lead, who has suffered a great deal at such a young age. Marillier successfully blends her youth and her experience giving Neryn a complex character and unique perspective to tell this story from.

//Nether reluctantly sits, glaring at his daughter as her eyes glow. It doesn’t take but a moment to solidify the link.//

#ask answered, #basicflavortext, #ic, #laven, #shadowfell
2 notes · See All
spiritspectresAnswer
Alright, how do we do this Laven?

~Sit. Both of you. Since I’m the tether here… and aren’t quite sure what I’m doing, we start slow. Julia you might feel a bit of a pull on your mind but it shouldn’t be painful. Just setting up the connection….~

#ask answered, #basicflavortext, #ic, #nether, #shadowfell
2 notes · See All
spiritspectresAnswer
Or even me? You wouldn’t give up on me, would you?

//His eyes flicker, weighing his options.//

-…That is irrelevant. Why are you here?-

~we came because we want to help you.~

I have need of you, dear virus. Do clear up a little problem we have.

//Two green eyes open in the darkness before a soft, high pitched laugh announces her disappearance. Nether arrives shortly after, stumbling in at Proniment’s feet.//

The town we were visiting didn’t seem the most pleasant town to be in. They’re obviously a close knit community, and so probably don’t get many outsiders. We set up base in the Wizards Sleeve tavern, and wandered round town.

We managed to find a shopkeep who is willing to sell a lot of our loot. He had a fairly reasonable percentage cut, so we left the majority of our loot with him to sell.

Frai and Rash wandered off and managed to get some maps from a shop, which will help us traverse the local area. One of the locations marked was in fact an old wizards tower. Apparently the wizard was a great powerful wizard capable of geoforming terrain. This was of interest to me, Dexter and Frai, so we said we should go and investigate.

As we headed off towards the tower, we could hear something behind us, but everytime we turned round, we couldn’t see anything. Finally we managed to catch a glimpse of a floating eyeball slowly following us. It wasn’t rushing to follow us, and occasionally kept falling behind. We used this to our advantage, and when we arrived at the tower, we snuck off the wagon, and hid in position to surround the thing as it passed us by.

When it eventually caught up, we were poised and ready to attack, but it didn’t seem bothered by us. Eventually we stepped up, and tried to speak with it, however it didn’t seem to understand us. Then suddenly our heads were filled with a coarse voice talking to us. It was in fact a Spectator, who communicates via telepathy. Apparently he was on his way home to his laid under the tower. We asked if there was anyone in the tower, and he replied nobody had lived there for years, and it was currently home to some small spiders.

Judging by the size of him, “small” spiders, might not be as small as we would consider, and so we approached the tower with caution. The tower was not a standard construction, because the stone hadn’t been carved by traditional methods. The stonework was VERY smooth, to such an extent that we had never seen anything like it.

The first two levels of the tower didn’t contain anything. The third floor seemed to have a very pale dust in the air. We were cautious as we arose to the next floor, where there was a lot of arachno-silk in the room. The party readied their weapons, as we came up to the fifth floor, and saw a large half drow half spider in the centre of the room…..dead. We examined the corpse and room to find a few useful things, but nothing of great excitement.

On accessing the towers top, we could see the all too familiar coloured ring, with a piercing gaze in to another plane of existence. A quick check from Frai, revealed this to indeed be a portal to Thanatos. The group decided to have a rest before stepping through, however for some reason, some of us decided it would be a good idea to draw from the Deck Of Many Things again!!

Brandobas drew a card that completely eradicated him from all planes of existence.

Rash drew a rapier of +3 damage.

Aufe drew a card that enabled him to re-write one event in history of his choosing. (I know, what’s the chances of someone being obliterated from existence, and then someone gets a do-over 2 seconds later!!)

With the deed done, the one important thing to do now was to close the portal, to prevent any more undead entering this plane. There was concern between the party as to how we would find another way to Thanatos to confront Orcus, however we felt in the grand scheme of things closing this portal now was more important, and we would hope to find another portal (or create our own) at a later point.

Me and Frai focused our arcane skills on the portal, and tried to close it. The fight of the previous battle must have been too much for Frai, as her concentration was constantly being interrupted, and it took a long time to get us both in sync.

We realised that we needed to get this closed quickly, and so I focused extra hard for Frai, and finally we could see the portal changing. But instead of it shrinking, the colours of the portal changed from a dark blue/purple, to an incredible pale blue. The obscured image on the other side of the portal had changed too, and when we looked, we realised that we were now linked to a different plane than before. This was definitely not a link to Thanatos, but somewhere else.

The party felt a strong urge to discover more, and so with much hesitation, we all stepped through the portal, and closed it once on the other side. We appeared to be in some sort of small ritual cave. As we stepped out in to the open, the world was in darkness. We quickly surmised that we were in fact in The Shadowfell. We deployed our carriage and horse, and could see a town in the distance. As we headed off towards it, we could hear wind, whooshing around us. Exchanging puzzled glances, as the noises got louder, we looked up to see a dragon flying above us.

We quickly braced ourselves, as the dragon slowly landed next to us all. But instead of letting loose a barrage of fire, it just quite happily sat there next to us. Thankfully Dexter could speak Draconic, and so helped us talk to the dragon, whose name turned out to be Umber. The dragon was also a follower of the Raven Queen, and agreed to give us a ride to the next town. As we travelled high in the sky, we could see other vehicles roaming the sky, called Air Ships. Umber said they were quite common round here, and we would probably benefit from acquiring one some day.

Eventually the journey came to an end, and Umber let us down to the ground near the town. As he flew off, we all gathered ourselves together, and headed in to town.