I’m currently binge watching the blacklist and obviously Liz and Reddington is my favorite father/daughter dynamic on the show so I went through the tags on here only to find out that there are actually people shipping these two romantically um what???

#the fuck is wrong with you, #i’m sorry i cannot understand how anyone can see them that way, #the blacklist, #elizabeth keen, #raymond reddington
1 notes · See All
moonstruckswansText

216 (tom keen): undoubtedly the episode dedicated to him. taking the blame to exonerate liz was one of the major highlights in his arc, and this was the starting point for a new beginning. he had been running since he was fourteen, and in that moment he realised that perhaps there could be a world out there where he didn’t have to run.

#should've made better edits but I was caught up with something else, #I made this post in two minutes pls forgive me, #tomkeenappreciation2020, #tom keen, #the blacklist
7 notes · See All
dobrevkeenText

Answer: This scene is my favorite line of Tom. He truly didn’t give a f*ck and could care less as to why Red didn’t want Tom to marry Liz again. Tom might be an a**hole but man was he hilarious.

2.18 (Vanessa Cruz) aka Tom learning how to swim

While Drexel is likely my favourite overall episode, Vanessa Cruz holds a special place in my heart for this turning point for Tom. At this point he’s taken some big risks. Even after going against Red’s orders by marrying her and then being willing to double-cross Berlin in exchange for his freedom, he’s gone to the feds to be willing to go to prison to protect Liz and then betrayed Bud directly by leaving him to the Germans. The one thing he isn’t willing to do at the beginning of this episode, even for Liz, is admit that he worked for Red.

And that makes sense. The people that used to protect him are now hunting him and he’s alone out in the cold. The last thing he would want to do is paint another target on his back by giving away Red’s secret. The truth doesn’t come naturally to him anyway, but he’s also terrified and alone. He needs to get out of town fast… but he also doesn’t want to leave her. You can see it in the way he jumps at the opportunity to help and the way he tells her about his boat and shares his probably unrealistic future plans, almost like he wants her to go with him.

It isn’t until the end when she tells him that he doesn’t get to pick and choose what truths he wants to tell if he wants to learn how to swim that he takes the advice to heart and makes what I would argue is the real turning point in his redemption arc. With the world against him and no promise of any benefit other than Liz knowing the truth, he tells her. He’s learning how to swim.

#*rory voice* and now...we say goodbye, #i saw this quote while i was still working on my fic and decided to make them one final edit, #because i'm better at gifs now and this seemed like one nice last parting present, #and this quote gave me feelings and all of them were lizzington, #(i lost the bookmark when i changed computers though :( so now i can't find the post again), #the blacklist, #lizzington, #tbl, #blood tw, #lizzington edit, #tbl edit, #my edit
12 notes · See All
kreativstyleLink
'Dembe-the blacklist' Graphic T-Shirt by fmanohttps://www.redbubble.com/i/t-shirt/Dembe-the-blacklist-by-fmano/49092205.1YYVU
#the blacklist, #dembe zuma, #dembe, #the blacklist fan, #the blackist fan art, #women's clothes, #man clothes, #t-shirts, #graphic t-shirts, #apparels, #poster, #artprints, #accessories, #iphone cases, #ipad cases, #iphone wallets, #home decor
0 notes · See All
actuallylorelaigilmoreText

alright everybody. who remembers my blacklist/lizzington phase? because i’ve spent the month revisiting it, to finish a very old WIP, and it’s time for me to share the results with anybody who’s still in fandom hell. this is not me spiraling back into tbl, i swear :) just parting gifts for the shippers i used to know because when i broke up with the blacklist i promised myself i would finish my story someday.

#the blacklist, #lizzington, #three posts incoming lol, #and then may's work is complete and i can breathe and answer asks and talk to my friends again!, #keeping my head down to stay in the necessary hyperfixation has been SO hard but it worked
7 notes · See All
catherineisasupplementalText

Please, send in requests for stuff to write. Any ship. Any character.

(If I don’t feel comfortable writing it. I will decline. No smut. No reader insert. I apologise I’m just not comfortable with writing it, personally.)

Answer: This was kind of a hard one for me as Tom didn’t really have friends. So I chose Red. Tom and Red were hilarious and I loved their banter together wether it was intense or comical (you can totally see Ryan and James loved working together). They brought a different aspect to the table—-but they both believe that they were doing the right thing for Liz. I actually miss the back and forth between them. How Red hates him but is constantly saving him or giving him assignments (desperate times lmao) and Tom just going along for the ride. It was the comedic break we needed from time to time on this show. I definitely miss it.

For reference purposes, I used a screencap from 3x18 in which Lizzie “died” and Dembe caught Red who collapsed and was overcome with grief. Breaks my heart every time. 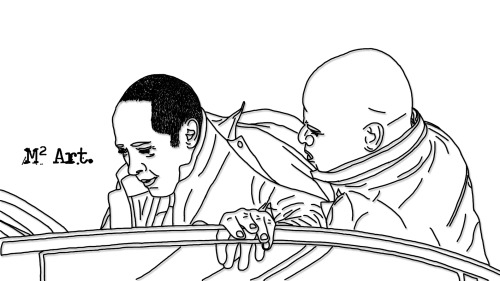 The way Aram admires Tom is incredibly precious - and they’re a good team, even if Tom is always slightly ahead of him

The Blacklist has so many stories of light and dark that gradually move into the grey and these two are such a fun mix.

This friendship had so much promise. One man that was desperate to live by the book, to be what he saw as a good man and to honour his father, and the other who never knew a good man to live up to and that who sharpened his teenage deviancy into into a useful weapon that helped him to survive.

I wish we’d seen more of it. Ress continuing to see glimpses of the Tom that Liz knew and Tom realizing that Ress was more than just a cop. I think they were good for each other. I think they challenged each other in the way that they both fought for Liz and the way that that devotion (in whatever form you care to put on it) helped them to grow and work together.

We were robbed of the snarky banter and favour that Tom owed Ress. We were robbed of Tom finding out that Ress isn’t as squeaky clean as he portrays and the two of them maybe, someday, getting to a point that they could talk about it. I would have loved to see a moment with the two of them at a bar talking about their rough childhoods over a beer and the walls of judgement that they both hide behind coming down.

Yep. You caught me. I miss Tessler.

If you pay attention to the nouns and pronouns beginning at 7x1, you’d see they’re talking of two women - Katarina AND this woman from Paris.

“She knows you tried to kill her, Dom.”
-Not specific to Liz’s mother.

“I never betrayed Katarina. She betrayed me!”
-Specific to Liz’s mother.

“You want me to kill your daughter?”
-Specific to Liz’s mother.

“She has to die. It’s the only way to protect Masha.”
-Not specific to Liz’s mother.

“That her beloved mother is alive? I’d have to say yes.”
-Specific to Liz’s mother.

“Which may mean she has taken Elizabeth into her confidence.”
-Not specific to Liz’s mother.

Straight Back To 7x1:

Liz: We know you all worked for Steinhil.
Aram: What we want to know is who he worked for.
Ressler: The employer. We want a name.
Liz: We know the hospital is fake.
Aram: We assume the injuries were too.
Dr. Busson: So?
Liz: So, Reddington isn’t paralyzed.
Hansen: He’s been on the run 30 years.
Abigail: If we could make him think he couldn’t run anymore -
Dr. Busson: She thought he’d talk.
Ressler: She?
Hansen: I don’t have a name.
Aram: A description, then.
Abigail: Nobody knows who she is.

They’ve been doing this all throughout S7, and will continue to until they actually reveal this woman is an imposter, so … pay mind to nouns and pronouns. Dom, Ilya, Dembe, and Red are protecting Katarina while Liz is aligned with an imposter. And they’re doing it for a reason. They did the same thing with Krilov’s second memory wipe on Liz. He never specified Raymond doing the memory wipe.

“Let us say, you had uncovered certain truth about Raymond Reddington.”
-Specific to Raymond.

“And he couldn’t have that.”
-Not specific to Raymond.

“He - He removed your memories. Who does that? Who can do that?”
-Not specific to Raymond.

“Before he found you, could you have done it – what you did in the RV?”
-Not specific to Raymond.

“So he did this to you.”
-Not specific to Raymond.

“The difference that it makes is that I’m worried that he’s gonna do it to me.”
-Not specific to Raymond.

“He told you not to trust him.”
-Not speciifc to Raymond.

tom and karakurt: the bar for friendships are set very low because all his potential friends greet him either with a pistol or a punch in the face. you can’t exactly term this as friendship, but I take no criticism. leave me alone.

on a serious note: I wish we got to see more of aram and tom, because that would’ve been such a great friendship. the ceos of nerd community. we were served breadcrumbs, and it was potential wasted.

#TOM AND KARAKURT IS A JOKE OKAY I JUST WANTED TO USE THOSE GIFS, #tomkeenappreciation2020, #tom keen, #the blacklist, #my edits, #my gifs
15 notes · See All
thesweetkeenlifePhoto

“Forgiveness doesn’t mean accepting someone’s apology, It mean understanding fully that a person made a mistake but is worthy of a second chance.”