Trending Blogs
#dad for one
gentrychildAnswer
I think you'd been asked why you think DFO is canon, but I was wondering about what about AfO being Izuku's dad do you find appealing?

Honestly, I had to think about this ask because I didn’t start believing in DFO because I liked it, but because there was a mountain of clues pointing at it.

But I did think about it. And I could tell you that what I find appealing is the Star Wars reference, the fact that where you come from doesn’t define you, how brilliant the twist is, how I love looking for the evidence Horikoshi gives us.

I could tell you that, since Izuku shows a lot of similarity with AFO, it’s a good lesson about choice, but also about help, how the support group around you is necessary if you don’t want to fall in despair or just roll your eyes and go full villain.

The real reason why I love DFO?

I am currently smiling at the sheer irony. Just… the worst villain the world has ever met creating this adorable green bean? A kid who adores heroes with all his might?

All Might just snatching the role of father and replacing AFO accidentally.

Izuku getting a quirk that was designed and used for eight generations to kill All for One?

And all those All Might merch in Izuku’s room? Paid by All for One?

The irony is just delicious. So when everything goes to hell in a handbasket, I will remember that.

#dad for one, #bnha asks
42 notes · See All
ao3feed-izuku-midoriyaText

So, it begins; Hisashi’s backstory summarized.

….even a short summary couldn’t be short. This flashback will probably take 2 to 3 chapters total. There will be small interludes in each chapter showcasing the present time, how both Hisashi and Toshinori are dealing with the situation.

Another BNHA which has recently updated.

All For One’s guide to a peaceful retirement

Arrgghh it’s so cuttteeeeeeee! This is a Dad For One fic with loads of fluff and it is adorable. The author is also still regularly updating, and has written a range of spin-off fics to go with it.

When All For One’s son Izuku is born, he decides to take a few years off his villainous antics to raise him, faking his death and integrating himself back into normal society. The story follows through the years of Izuku’s life, from infant-hood all the way up to teen years (so far) and the adventures Hizashi (formerly known as All For One) has in raising the notorious problem child.

Ready as Anyone Could Ever Be
by River Lethe

Ready As I’ll Ever Be BNHA Style. Based on Anyone by Gentrychild. Please go read that first. Credit to Gentrychild.

I fell down the All For One is Deku’ s dad theory hole and I can’t get out. I blame fan theory vids and Conversations with a Cryptid (really good fic yo).

Thus, I had a sudden violent urge to make a Star Wars comic of the theory.

Izuku immediately knows that something is wrong. He can’t remember being attacked, but someone has him trapped in a space that is very much not real, even when it seems to be based on his own memories. Too bad Izuku is quick to go off-script, even if it seems to lead to answers he doesn’t want.

He dreads the fact that part of him knows who is behind this, he simply can’t understand why.

To Be a Hero
by Jewelslh

Midoriya Izuku was born the son of a villian,but he’d never let himself be one. He made that promise after his dad gave him his first quirk.

Step 1: Get rid of your abusive father that still dares to call himself a hero

Step 2: Get your sibling that still is in the country to safety, it doesn’t matter what that takes

Step 3: Get rid of the society that even made all of these things possible and help rebuild a new one that is hopefully
better

Step 4: Check on the rest of your family and maybe visit them if it is safe to do so

Step 5: Maybe spent a bit of time with your boyfriend along the way

I can’t be a hero
by BurlyUranus

“Y-yes, All Might?” said Midoriya a little surprised. He seemed to be deep in thought.

“You are crying, is everything okay?”

Heir of Two Kingdoms
by SilveRanger

Just when Izuku has given up on trying to find a way to get magic for himself, he is summoned by an ancient ritual to become the successor of his father’s greatest enemy and the symbol of the Light Kingdom- a hero known only as All Might. Izuku now walks a narrow path between the Prince of Darkness and the Successor of the Light but he knows that someday soon, he will be forced to choose one side or the other and that is a day that he hopes will never come.

Toshinori confronts Hisashi. I had to make another cliffhanger because I couldn’t fit this into one chapter like I intended, whoops.

Not good enough for you
by DawnHero

Izuku goes to visit his mom one weekend, but what he doesn’t know is that a certain One For All user is following him. 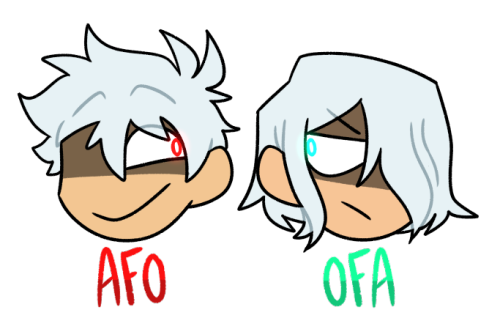 Oh, and Hisashi checks in on his lil-bro-yet-not-really and goes to see Shirakumo and Kurogiri

Genos (once named Touya) is the eldest son of Endeavor. He needs to talk to Shoto after the funeral of their father but is ashamed of how he left his family behind. Tears are shed and bonds are mended.

On their 16th birthday (whichever soulmate is youngest) teens switch bodies with their soulmate. It’s fun and all except if you switch with the guy you keep teaming up with while in disguise as a certain rabbit-themed vigilante.

Aka: Izuku is a vigilante after he doesn’t get into UA (goes to Shiketsu) and met Shoto while in disguise during the USJ incident, the fight with stain, and rescuing Bakugou. Now he has to figure out how to to get through a day bodyswapped with the son of Endeavor in the middle of UA campus without exposing himself as the Jade Rabbit.

Yagi Toshinori is a thirty-something-year-old man with a sunny disposition and a really troublesome homeroom class. He can no longer hold constant hours as a low-tier pro hero due to age but enjoys his teaching life all the same. He is revered for being the first quirkless pro hero who inspired the quirkless heroes of tomorrow. He prides himself on being able to steer bad students onto the right path and exhausting all other options before expulsion.

Aizawa Shouta is a jaded forty-something-year-old man whose injuries have finally caught up to him and he has to settle for a job teaching heroics at UA. His injuries from his battle with All for One and borrowed quirk have begun to be too much for his body and he has begun his training his successor. He’s also the number one hero btw.

Aizawa ends up stuck with Yagi as a mentor but refuses to be entranced by those big blue eyes. Yagi starts out letting his assumptions about the number one hero cloud his perception but learns that behind the battle-hardened exterior lies a man who just wants to help people.

Aka: Aizawa got One for All, Yagi became an underground hero and I mess around with the timeline. Everyone else is the same unless I get specific requests.

Soon after his first fight with All For One, a common mugger takes down the still wounded symbol of peace. A young hero named Eraserhead finds them and scares off the mugger but for Toshi, it is too late. Delirious from the pain, Toshi recognizes Aizawa from Nao’s descriptions and makes a last-ditch decision to give the fledgling hero his power so it doesn’t go the waste.

Aizawa is sure he’s just delirious so he puts the hair into his mouth without the intent to swallow it but while trying to tend to the older man’s wounds, he forgets and ends up swallowing the hair.

By some miracle, Toshi actually survives and is frantic to meet up with the underground hero he gave his quirk to before the poor guy explodes or something.

The Children of AFO

Midoriya isn’t quite sure whether to laud or fear the group of strangers scrambling to keep him and his injured classmates safe during the final fight with the League. They seem alright but there’s something oddly familiar about their wide eyes and nervous behavior.

When he is fatally wounded despite the battle being won, he wakes up not in heaven but on the couch of one of those strangers. She introduces herself as his half-sister.

They’re all his half-siblings.

Aka: after the final battle, Izuku is whisked away by his half-siblings and learns the truth about his fraternal family. Some are cool, some are scary, but most importantly they’re not trying to kill him.