Seventh stage of paradox psychosis is homicidal rage because, when around yourself and fucking up the timeline in such a way, the instinct is to eliminate the cause of it and rectify the two-of-the-same-person-existing-in-one-place problem

#I had the thought while watching a horror movie with time mishaps lmao, #This was probably horribly obvious to everyone but me huh, #Number Five, #Five Hargreeves, #The Umbrella Academy, #tua, #tua 2, #tua 2 spoilers, #Grim Stuff
10 notes · See All
daydreamer66Text

Can somebody feed this man child a proper meal?

I swear the only thing I’ve seen Five ingest is black coffee.

What I did today, I did for my family. 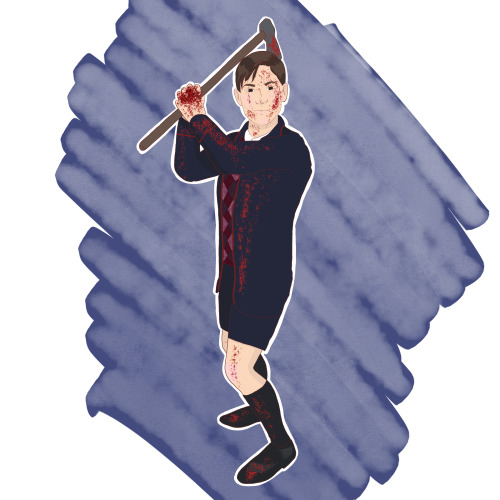 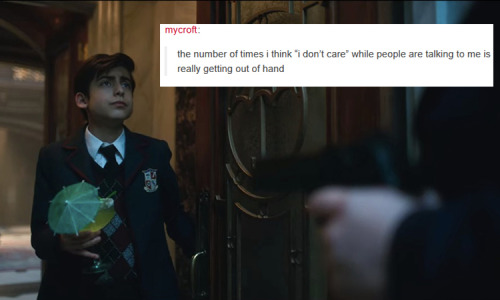 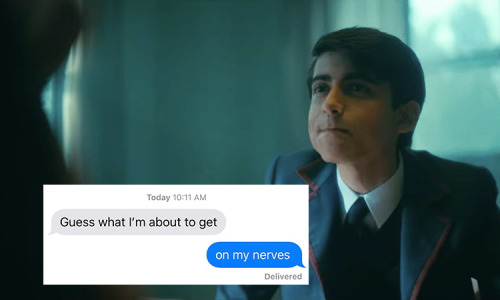 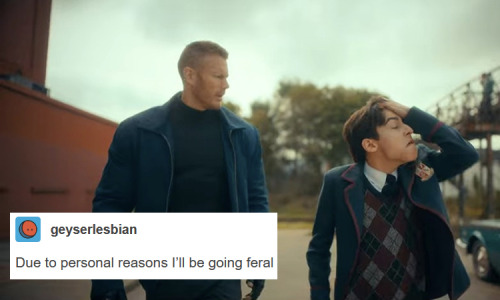 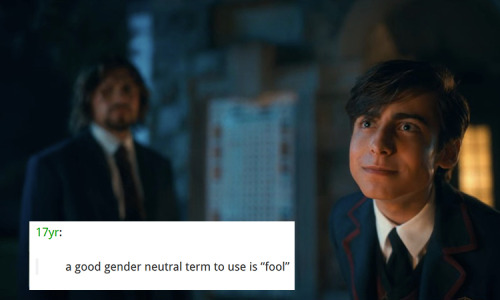 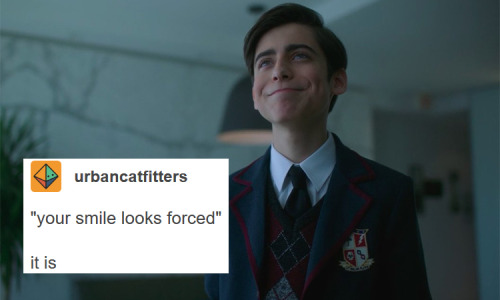 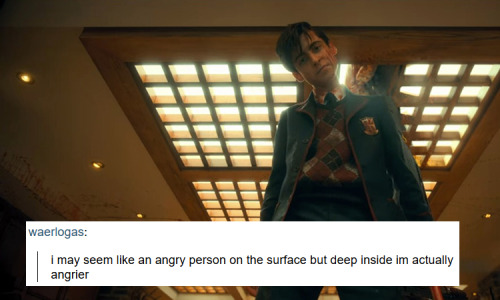 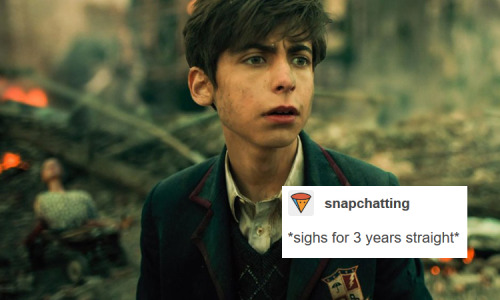 #five hargreeves, #the umbrella academy, #tua s2, #the umbrella academy spoilers, #number five, #tua, #my favourite angry gremlin grandpa, #tua spoilers, #asdkasj i was trying to edit my original post and accidentally deleted it sorry for the repost orz
54 notes · See All
princesskittenoftardisChat
Klaus: you are the oldest, it´s your JOB to keep us from making stupid decisions like this
Five: that is true
Five: but i was also really curious to see how many donuts you can eat in one minute
Ben: how the hell am i the only dead one in this family!?
#the umbrella academy, #tua, #klaus hargreeves, #number five, #ben hargreeves
20 notes · See All
princessmononoke001Text

Klaus: Five, you need to do something when people start to cry

Diego: aww you really don’t have to i can get my own-

Lila: watch how fucking fast i can drink-

Five: *blinks over there, grabs the coffee out of her hands and finishes it in 2 seconds*

I really want a scene where the siblings go to a karaoke bar and they all sing bohemian rhapsody a song together, Klaus is really drunk and keeps wrapping his arms over everyone but is the only one to hit the high notes, Allison and Diego are more focused on dancing, though Diego is also really getting into singing, Ben is too because the only one who can hear his awful singing is pissed drunk so he doesn’t care, Vanya’s the only one to actually keep tempo since she’s the only one who knows anything about music, though its hard because Allison keeps grabbing her hand and making her dance and Vanya can’t help but dance with her, Luther is barely singing and Klaus keeps hanging out of him but he’s still having fun,

And Five is down at the bar watching his dumbass siblings with a smile scowl.

summary: Five visits his brother, seeking coffee and pancakes. What he gets is more than he expected. (Y/n) takes care of him and gives him some warm feelings after all those years after the apocalypse. Of course, Diego doesn‘t like the idea of his girlfriend babying his brother.

request: Hiii I read your Diego Hargreaves fics and I’m absolutely in love!! I was wondering if you could do something where reader is dating Diego and loves to baby Five?? (Maybe Diego pretends to be jealous cause he wants attention and Five loves the attention cause he’s been alone for so long.) You can just stick to the first part if you want, I just added the second part in case you wanted something more specific :) ~ @wowjeena (it wont let me tag you)

The smell of fresh made pancakes and coffee fills the bedroom. Diego sits up in his bed and places one of his hands on the cold sheets next to him. His girlfriend isn‘t in bed anymore which would explain the smell of food. The half-naked man starts to smile because this small gesture fills him with so much love.

Slowly, Diego leaves the bed but doesn‘t even bother to put on clothes. At least, he is wearing boxers. Half-naked he walks down the small hall. As soon as the sound of voices and laughter reach the mans ears, Diego stops. Someone is in the kitchen with his girlfriend.

“How much sugar do you want?“, (Y/n) asks and opens a cupboard, taking the sugar and walking to the boy sitting at the table. She stops when she sees her boyfriend leaning against the door frame, looking rather surprised and annoyed.

The female pours a bit of sugar in Fives cup. He thanks her with a sweet smile and takes a sip. After putting the sugar back, (Y/n) walks over to where her boyfriend is leaning and greets him with a short kiss. Her warms hands wander over his sides and make Diegos heart beat faster.

“What is he doing here?“, asks Diego with a frown and strokes a hair strand out of (Y/n)s face. She looks perfect with the messy hair and the only thing covering her one of his shirts. For him it‘s a beautiful sight but Five should rather take his old eyes off his girlfriend, otherwise he will happily cut his throat.

“Well, all of your siblings are always welcome. Five arrived around 8 am and asked very nicely for a coffee. Who would I be if I denied him that?“, (Y/n) explains in a sweet voice, takes Diegos hand and escorts him to the table where a cup of coffee as well as pancakes are waiting for him.  After one last angry glance at his brother, Diego takes a huge bite from his pancake. They taste like home, because his girlfriend made them.

“Would you like some berries?“, (Y/n) asks the young looking boy, standing next to him and leaning slightly forward. She places one of her soft hands on his shoulder, squeezing it gently. The touch feels good after years of isolation and the apocalypse.

Five nods. His brother watches him closely, and realizes that Fives eyes wander from his girlfriends face to her bare legs. Diego growls.

“Honey, why don‘t you get changed? I can get him…his berries“, Diego says through clenched teeth. His girlfriend looks at him with confusion because why should she change? She is comfortable in his shirt, besides normally he loves seeing her in his clothes.

“You could put on clothes first, Diego. I can see your morning wood.“ Five grins at his brother and takes a sip from his black coffee.

(Y/n) can only shake her head and gets the berries out of the refrigerator. Then she places them on the table and wants to sit next to Five to finally, eat her breakfast but Diego pulls her plate and cutlery next to him. The female raises her eyebrows but nevertheless sits down next to her boyfriend.

During the whole breakfast Diegos hands lays protectively on her left thigh.

“Five and I want to go to the small book shop later“, (Y/n) says after a long uncomfortable silence. She swallows the last bite of her pancake and looks at Diego, almost as if she needs his okay to do something.

“What about…me?“, asks Diego with confusion but there is something deeper inside him. He is hurt because his girlfriend planed something with his brother, ignoring him completely.

“I thought you hated how long I need to choose a book. Last time we were there you…“, his girlfriend starts to explain and places one of her small hands on his shoulder. She noticed the slight stutter in his voice and is concerned she hurt him. Diego interrupts here before she can say anything else.

“I‘m coming with you“, he states and earns a huge smile and a short kiss from his girlfriend. Five rolls his eyes and finishes his coffee.

An hour later they enter the small bookshop. Diego has finally put on some clothes and since they left their shared apartment, he stares grumpily at his brother.

Normally, Diego would sit down in one of the huge armchairs but today he won’t leave (Y/n)s side as long as his annoying brother is with her. The three of them stop in front of the fantasy section.

“You should go there!“, Diego bumps his elbow against Fives side and points to the children section. The mans lips form a huge smile. The boy rolls his eyes and takes a rather thick book.

“Don‘t be so mean to him, D. He is older than you“, (Y/n) tells her boyfriend and looks up from the book in her hands.

“The way you baby him all day, I believe you are the one not knowing he is actually 58 years old!“, the man grumbles and lets his hurt gaze wander from his girlfriend to a shelf filled with books written by Stephen King. Seconds later, he feels an arm wrapped around his waist and the weight of (Y/n)s body leaning against him. She rubs her head against his chest like a cat trying to get treats.

“Don‘t worry, baby. I‘m going take real good care of you tonight“, (Y/n) mumbles while she browses through a book. 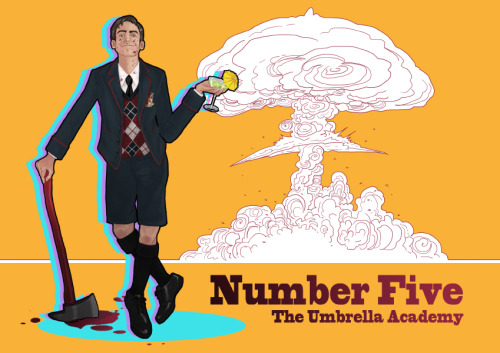 can we appreciate the fact that b99’s “it was number five. number five killed my brother” is a perfect quote for the umbrella academy?

“We didn’t choose this life,