Showed this TikTok to my science teacher and she laughed

Stoichiometry is really confusing for some reason?

#stoichiometry, #Chemistry, #schoolblr, #i have cried over this, #for like a couple hours
0 notes · See All
jieleven11Text

idk what stoichiometry is but it sounds fun

Mass volume relationship is when embedded with limiting reagent concept.

If anyone is an ace at stochiometry please hit me up. I need chemistry help. 😩

IS THE r USED IN THERE, MY LAB BUDDY SAYS SO I’M SO CONFUSED

my chem professor changed the due date for our stoichiometry lab from last Thursday to this Monday, so I put it off and now I’m about to cry because I have no idea how to balance this fucking equation

#wtf, #stoichiometry, #when I'm given the balanced equation i don't have a problem with it, #but the first seven questions can only be done when i balance the equation, #and i have no idea how, #someone kill me, #or help me, #either one works, #ignore me, #personal
2 notes · See All
chiribombText

Any, like, high schoolers wanna send me their stoichiometry homework

I’m not gonna give you the answers I just wanna practice :P

This kind of super-basic annoying busy work is the part where I’m most likely to get tripped up because it always gets explained in a way that makes it way more complicated than it needs to be! I spent half of the first semester in my high school chem class getting woefully behind because the method the teacher showed us for converting between units just made absolutely zero sense to me, and I thought I must be a huge idiot until one day in frustration I just took the textbook myself and was like “wait…it took three weeks and a bunch of scary-looking diagrams just to tell us to multiply this number by this number, a concept I’ve intuitively understood since second grade?” And then in college I got tripped up because no one explained that [x] was “quantity” and I was like “what the FUCK I don’t remember matrix math!” In 8th grade I was bored and independently tried to come up with ways to measure the rate of change of mathematical equations, but when I took calculus, the definition of “derivative” was never really explained in a way that was clear to me, so I spent several weeks floundering because I didn’t know what I was supposed to be doing before I realized it was something I had already figured out years before.

Physics, math, and chemistry are subjects that I do fine in if I teach myself, but I just CANNOT figure out what the hell people are talking about whenever someone else tries to explain it to me. So now I’m trying to reteach myself these subjects before I have to take them in class form because I know I’ll struggle if I don’t.

Balancing chemical formulas and getting to Oxygen

The word stoichiometry has been derived from two Greek words: stoicheion- element and metron- measure.

Thus, stoichiometry deals with the calculation of mass/volume of reactants and products in a chemical reaction.

The easiest approach to solve such problems involves the following steps:

Person: how much sugar do you need

Me: YES I NEED 0.07 MOLES AND NOT A HUNDREDTH MORE PLEASE

#we were making ice cream in class, #technically we were figuring out how many tablespoons equaled 0.07 moles, #because she told us to add 0.07 moles of sugar into our bags, #chemistry, #stoichiometry, #sometimes university is awesome, #I love my professor
3 notes · See All
stefhaniecdmText

There are four easy steps

It was cool, but t’was hard on the start

You must balance the equation

You must find the mole ratio

of product and reactant involved

then the mass of the compound

It so easy when you know the steps

Now I get the answers that I want

And now I survived 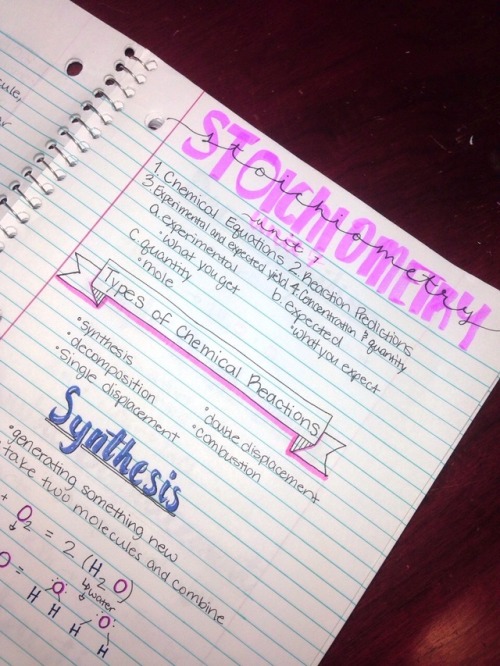 1~100 days of productivity
Some chem practice problems from today 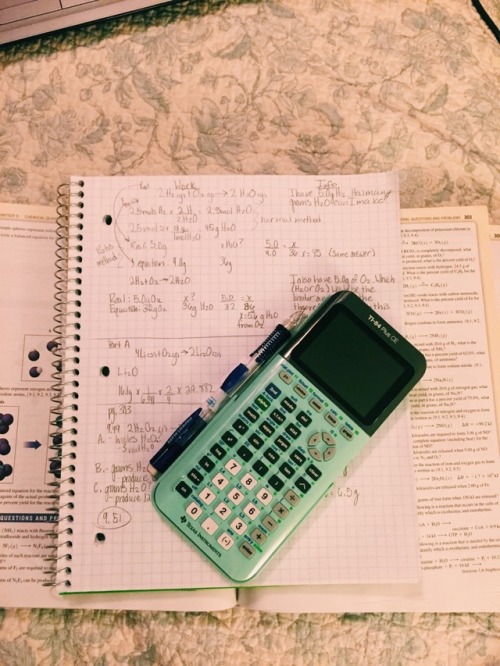 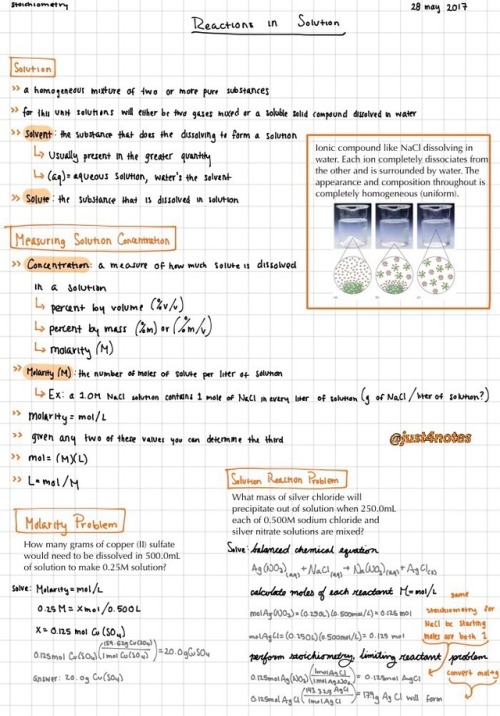 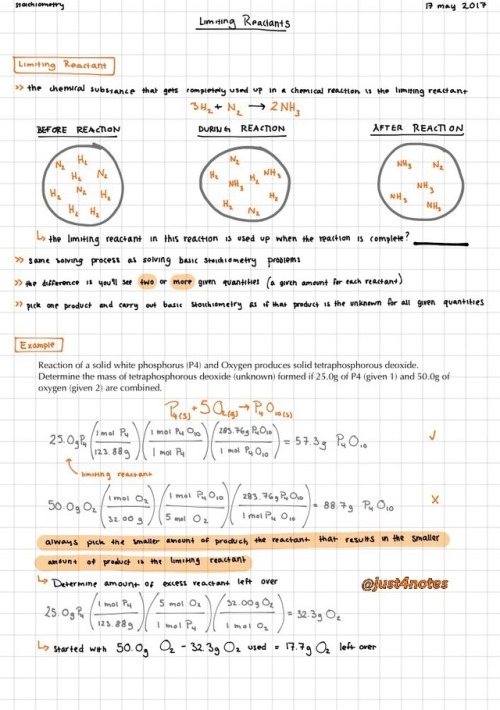 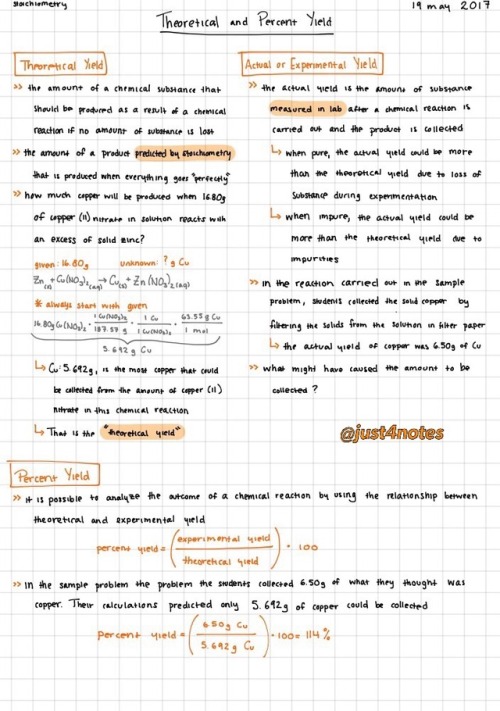 I’m so sorry for not being active recently. I have finals coming up and I just had my APs. Plus I just had like a three-week rut and I just pulled through ;). I am planning to post ways how I deal with ruts or mental breakdowns and hopefully, it will help someone out. One of the best feelings is coming out of a rut feeling confident, inspired, and back on track. Anyways, here are some pics from today’s nursery adventure and study session for my upcoming chem final. <3

hope you have a productive week, 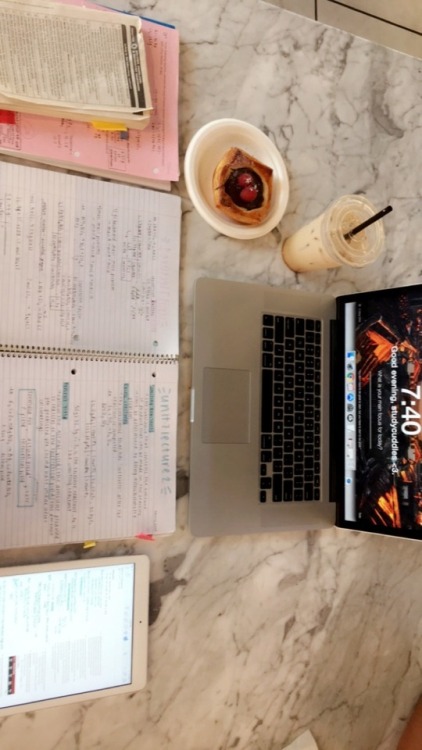 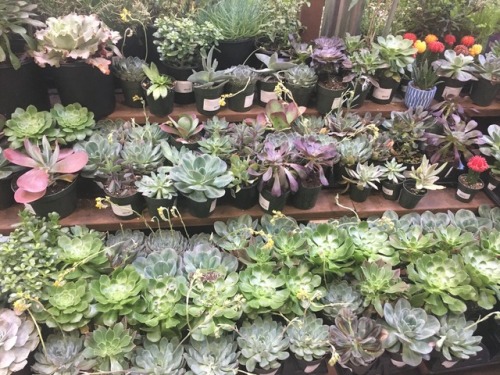 Anyone good with stoichiometry I need some serious help, I’m failing and the years almost over. I don’t understand anything he's teaching.

#stoichiometry, #science, #chemistry, #failing, #highschool, #help me, #message me to help
0 notes · See All
Next Page