To be honest I ship Catradora more because i see Adora in the fanarts as a generic white girl you can project yourself in to pretend you’re kissing Catra, her lack of remarkable character design is perfect for that.

Reminding you that I wrote this!

It’s my second Catradora AU! I have the excerpt in here and the post will take you to the full version on my Wattpad.

Catra, internally: there she is. The love of my life. The reason i’m happy. The most beatiful woman on etheria. In the whole galaxy actually. I just want to stare at her for the rest of my-

Catra: the fuck do you want?

Catra: *asleep, next to adora*

Adora: i’m going to buy this woman an engagment ring so big she can’t even lift her hand

Glimmer: want me to look around the castle for priceless family heirlooms so you can propose to your queer war criminal cat girlfriend?

i hope nobody’s done this yet, but i highly doubt that

We all know it’s either Hufflepuff or Slytherin. Here’s my own hot take:

It depends on your interpretation of Hogwarts houses.

If you think that Hogwarts houses represent values, Catra at her very core is a Hufflepuff.

Think about the end of S4. Catra was quite literally on top of the world, but also at her unhappiest. If she was a Slytherin, she would never give up all that power for Adora. She would have forgotten about Adora a long time ago. And Scorpia leaving wouldn’t have affected her.

Outwardly, however, Catra tries to project an image of endless ambition. Whether this is a conscious decision or not is up to interpretation. I personally think that she genuinely saw herself as an ambitious person because she wants to convince herself that her dream of ruling the world with Adora was more about ruling the world than Adora.

On the other hand, if you see Hogwarts houses as representing traits, Catra is a Slytherin through and through. Her army was no match for Adora’s overpowered dream team, and yet by the end of S4, she was beating them. The fact of the matter is that Catra is an amazing strategist, and if that doesn’t scream Slytherin, I don’t know what does.

In fact, my personal headcanon is that she ends up in politics (advisor, diplomat, maybe senator?) or the military (general).

Just some drawings of Catra and Adora😅

I made a comment to someone these days about how this idea that Shadow Weaver didn’t really redeemed herself and was just thinking she’s the best even dying isn’t really translated to the narrative of the series and you know that more because the creator pointed it out then anything. To Catra and Adora, Shadow Weaver invaded their worse moment and saved them, forcing them to believe she was good. In that last scene, they are just so fucked up already because they didn’t solve any of their psychological problems through out the series, and to make it worse Shadow Weaver fucked up their brains even more by guiltriping them. Anyone who’s watching will not think “oh, shadow Weaver is evil and they can see that”, they will think “fuck, life sucks, there’s no hope, being happy means being traumatized while you save the world”. It is very gas light-y like everything in this show. Here’s my original comment on this:

Honestly mate, this means Catra somewhat is more healed because her abuser died, and that’s fucked up. Catra ends up the series compleately traumatized, throwing herself in an abusive relationship again and never realizing she’s not broken and that she’s not mean and has never been. That’s what Shadow Weaver represents by dying. Catra’s inability to heal. Fuck this show.

By the way, the inability of people to recognize and point out that Adora is an abusive narcissist and that what she does to Catra is DARVO really concerns me. That’s why I keep this blog up. People should know this.

missing spop is my purpose

Hahaha I’m back! Sorry for be absent all this week. But I have a lot of work to do. Haha. And… I have an Avengers marathon these week… so… one thing became in another. I hope you like it… and… I was thinking… who could be spidey?

¡If you are interesed send me a DM!

PLEASE DO NOT REPOST OR EDIT MY ART 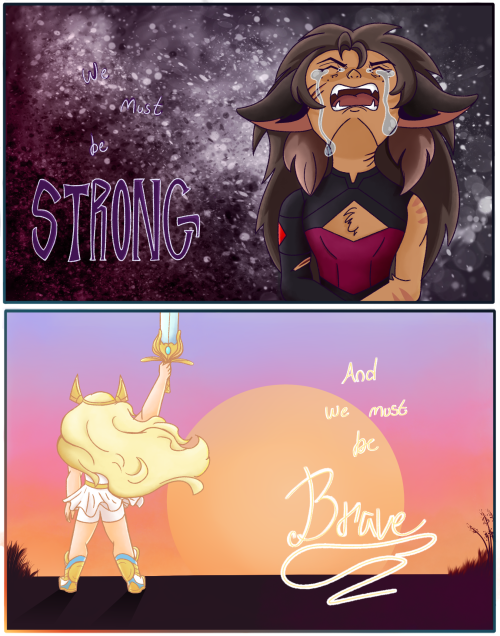 i hate school so i’m gonna draw catra instead 😌

she-ra is my favorite girl boss

Catra watches as young Adora promises young Catra that nothing bad will ever happen to them as long as they’re together. Catra snarls, turning away. Finding Adora hanging on the ledge, Catra picks up the sword and looks at it, then at Adora. Catra goes to taunt her, but hesitates. Looking over her shoulder, she looks back at Adora and, rolling her eyes, reaches down and lifts Adora up. “This isn’t because I like you.” Maybe one day, you’ll realize what I actually mean, Catra thinks.