*Dimitri is in the shower*

Hilda: Okay, you clean off in there, I’m gonna wash your cloak!

Dimitri: Okay but be careful those are dry clean only!

Hilda, dumping the cloak in the wash: Whatever!

~(At the Tea Party veranda)~

Lorenz: The man single-handedly responsible for nearly murdering most of the Golden Deer in a psychotic breakdown is taking a shower in the other room. Neat is not the word I would use.

Hilda: Okay so I just got a look at Dimitri’s ass, and aside from being surprisingly nice he’s got this weird hole-shaped scar.

Lorenz: …Yeah, Hilda. Boys have that too.

Hilda: No you idiot! I mean a hole above that one!

Dimitri, from inside the showers: WOMAN! Where’s the cleansing powder!

Hilda, over her shoulder: We don’t have that here! We have Alliance-made soap!

Dimitri: The hell is soap?!

Hilda: It’s that yellow bar there made of animal fat!

Dimitri: That sounds awesome! *chomp* I get the distinct feeling I shouldn’t have done that.

Lorenz: I change my mind, this is pretty neat.

Elf poker is just go fish but with gambling

Thanks for stopping by yo

Ghost in the Mirror

Of course we had to Ghost. If you are new to the fandom as of season 2, you should know that Ghost was THE big fic of season 1. It’s also about the size of a bible. It was written by our friend @ride-on-the-woff-side and published on Fanfiction.net and AO3. You can also find it as the Hilda fic with the most hits on AO3, not including crossovers.

Hilda is now 23 and working at a humanitarian zoo in Trolberg. After spotting a mysterious blue haired man at the bus stop, Hilda is left with a question that takes her on the ultimate adventure. Enlisting the help of an old friend, she sets out to find answers. Will she succeed, or perish trying? Or will she discover something bigger? (T for Mild Language Drug/Alcohol Mention)

Ghost IS a Hilvid (David x Hilda) fic, but even if that ship’s not for you, I’d give it a shot anyway, it’s pretty special.

Hilda: No, but I brought the next best thing!

Claude: Lorenz? You brought Lorenz? The next best thing would have been Lysithea!

Hey y’all, I drew a little Carulia AU that I’ve had on my mind for some time now. Carulia riding woffs, we love to see it. I loved playing with the colors on this didndidnf. Carulia is red and purple and you can’t change my mind. 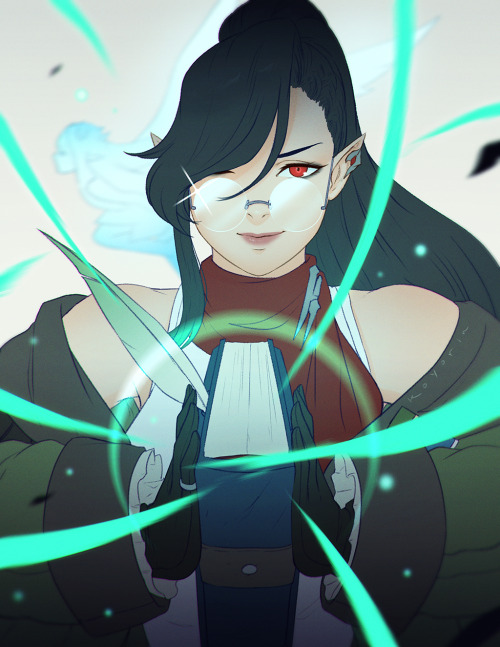 Some au Hilda :D she fights with a staff. One side for slicing, one side for bonking people on the head. Also a bonus pic with a look at the scar she got from fighting yuga

For those interested, this is a fic I’ve been working on for a while now. Hopefully some people are interested

Hilda: *Getting Ice cream with Gerda*. Hey Gerda what is the most scariest thing in the World?

Hilda: I could see that.

Gerda: Is it Joey.

Things I love about the Hilda Tumblr Community, part 1.

Most of us agree Sketchbook is the cutest thing ever. 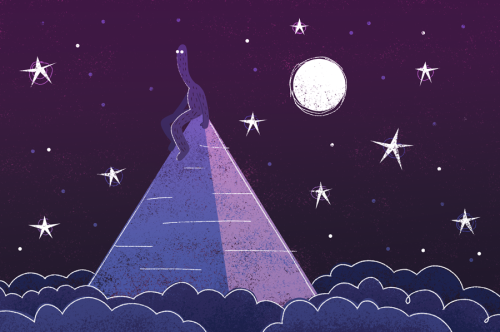 [ID: A snow globe. On its base “SHROOMS”, in it a tiny house among big mushrooms in assorted colours and shapes]

Okay so I just started watching season 2 of Hilda, so don’t spoil me!!

I like that Frida gets to be a witch! (I’m very pleased with myself for spotting the foreshadowing of the pointy hat shape that appears behind her head when they first enter the Witch’s Tower :P) But it seems weird to me that Hilda is going to be her familiar? Especially since all the other familiars appear just to be animals, slightly intelligent ones, but, like, not even ones that can talk!

I think it would be cool for them to be witch best friends! And I’m with Frida on the idea of Twig as Hilda’s familiar being very cute!

Idk, I’m sure it will be handled well! I don’t think there’s been any major choices in the show that I’ve disliked so far. I wonder if Frida will get a slightly witchier look or aesthetic, or if she’ll just bring her existing preppy charm to witchcraft, lol.

Unfortunately I cannot watch more tonight, as I am trying to be a grown-up and go to bed before 3am.

Commission of Johanna and Gerda playing some board games. 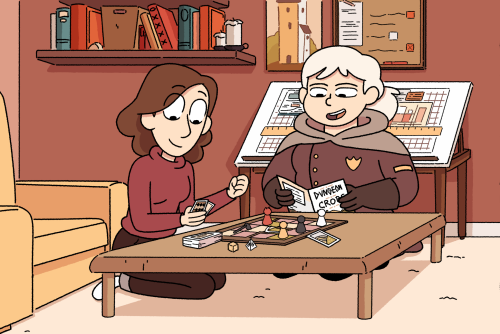 I dont know canonically, but as a pansexual, I’d be happy to claim him for our little club/team/thing.

hilda spoiler: only two episodes in and she’s an enemy of the fantasy cops. i love that for her