I’VE COME TO THE CONCLUSION THAT I’M GOING TO WATCH DISNEY SHOWS!

Not in this order but I am so excitedddd

More heartbreak city. Luz and Amity are around 25 here with no kids. Idk if this calls for a trigger warning, so carefully tread.

Luz sighed as she placed the bills on the kitchen table. Work had been so slow for her. She has barely been making any business in her potion and collectables stand. During these past couple of weeks, Amity has been the only one making money for the household. And Luz hated it. She didn’t care that Amity was making more money than her, it’s just that Luz felt like she couldn’t provide for their small family. As the human kept going through the bills, she noticed a letter addressed to her wife.

I think Earth is a reallly greaaat place! That’s saying something, because I’ve been to outerspace!

oh, that episode was fucking great! What an episode to come back to!

It managed to defy all my expectations! Like, literally that whole list I came up with didn’t come true! And I’m so glad to be wrong there, but this was a breath of fresh air!

The dynamic because Luz and King is just fantastic! They have so much good chemistry to begin with and this episode pushed it to a higher level! I love how like, both Luz’s laser focus on magic and King’s desire to get luz interested in his writing were both very much justified in very relatable character motivations, and I love how it was them coming together that got them both what they wanted in the end!

The scenes of monster Eda chasing them around the house were genuinely terrifying and it’s been a long time since I’ve been thrilled like that by an episode! (I think the last time was the Apathy from RWBY?)

The runes have so much potential for some fun story writing and I look forward to see where they go with that!

Tomorrow we continue The Owl House after Roxy’s stream!

Thank you all for joining me! I love you! <3

Just, flatout crush their dreams why don’t ya? D:<

I mean, fair, but still…

…you’re a part of the house…

YOU ARE JUST A MONKEY!

Pffft! I guess he came back to life as soon as Eda stopped being a monster?

It must suck to be a door…

Okay, so the monster form is the origin of the name.

Did the curse give her pale skin too?

I mean, pointy ears but considering her completion i thought she was another species entirely, but she could just be an elf! And she just bought into the whole owl theme after getting ostracized because of the curse.

My girl, so happy to be finally casting magic! Brings joy to my heart!

Gog, I hope she can get her phone fixed so she can do this with other spells! Hell! She could have her botanist friend cast a basic plant spell for her to copy!

Oooohhhh the potential for this is incredible!

The spell is even in the name, what’s not to love?

I’m sorry it looks bad, I’m still not out of my rut.

Well, they survived that somehow!

You know, without the shell, they’re pretty much just a pink monkey…

Oh! Huh, it’s not swallowing up the wall right now… maybe it doesn’t sacrifice whatever you draw on?

OH! SO SHE HAS TO HIT TO ACTIVATE IT!

That changes everything! She can just pre-emptively draw spells!

Then again, she wouldn’t be able to make spells so big if she did it on anything she could carry…

I loved drawing Luz as Cardcaptor Sakura so I had to draw this! 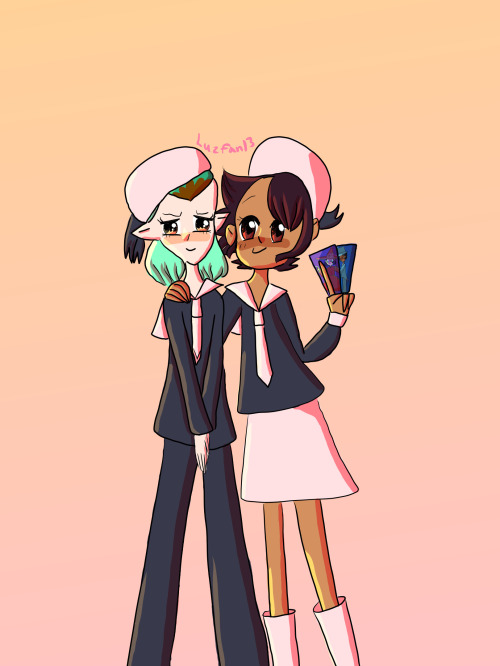