Yeah, those weren’t ALL of my Pokémon OTPs…Wanna see a bit more???

Cynthia x Diantha—[I couldn’t find a ship name. If anyone could be so kind, could you please comment on what it is?]

The only solid Galar kids I’m likely to add at this point are just younger siblings for the established families.  I know Bede and Victor have more than 3 children (possibly all the way up to 8), so at some point, I’ll add the rest of their children.  Hop and Allister are also fairly likely to have another kid, since I can see Hop wanting to give Poe a sibling.

I still like the idea of Gordie/Bea and Gloria/Marnie as couples, I’ve just hit my limit of wanting to add more families to this verse.  Siblings are okay, since they count as development for already established families/characters, but I really just have no desire to add any new new fankids at this point.

This ship is just so cuuuuuuuuute! I guess, in here, I worked on side profiles? I don’t know. But either way, I adore these two and want nothing more but their happiness.
I should have made the canvas smaller but I totally forgot so lol 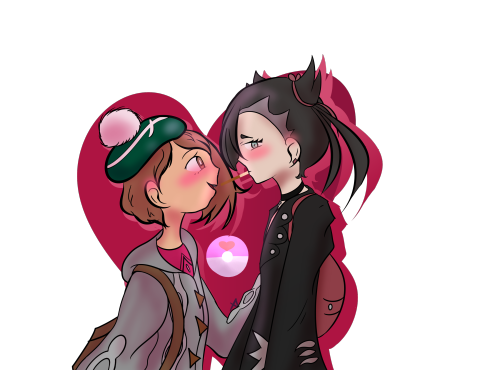 this is kinky (kinda old art but enjoy regardless)

tbfh i liked this better when i was making it cause i dont rlly dig it now..

anyways i might finish the whole song! depending how much time i have.

edit: aahh im so glad ya’ll like this. unfortunately, the file for it was deleted so i will not be able to finish it :c 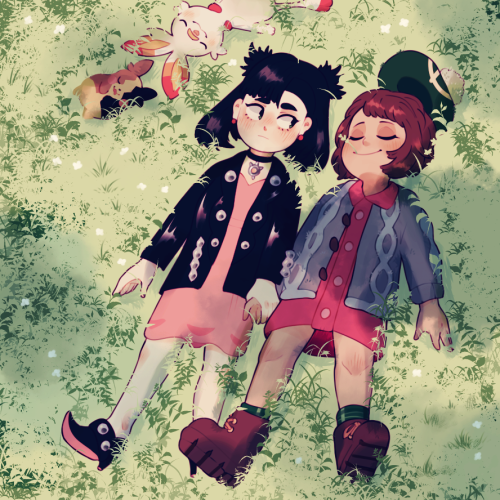 Femslash-February is a thing?? H u h … learn something new every day!

I’m throwing some Froyo in too. For reference, if you didn’t see my previous posts about gothgfshipping, Froyo is the shiny pygmy Morpeko that Gloria caught for Marnie.

Froyo likes to hide in Gloria’s pockets when she visits Spikemuth just so that his moms will have to see each other more. He doesn’t like that they don’t just go everywhere together, that doesn’t make sense to him.

Gloria’s mum already considers Marnie (and by extension, Piers) as part of the family. She’s making gifts for the two of them and inviting them to every holiday gathering.

Gloria brought her mum to Spikemuth to meet Marnie and her father and uncle, so they could knock out two (three?) Rookidee with one stone. Gloria was a little busy being champion and training up her new team for the next Gym Challenge, so they didn’t have much time. They were both relieved when their guardians hit it off.

During the Champion Cup, Marnie and Gloria save time and money by just sharing a room. Victor can share with Hop if he doesn’t like not having someone else in the room.

Froyo refuses to battle, no matter which of them is trying to get him to fight. He straight up refuses. No battles for Froyo.

In the Monster Mash AU, Marnie likes being in her Impidimp form and being carried in the extra fabric of Gloria’s dress. She usually falls asleep.

Marnie’s Liepard had a litter of Litten unexpectedly, so Gloria came up to Spikemuth to help Marnie and Piers take care of them. Hop tagged along to get some pictures of newly hatched Litten and record their growth progress. A storm hit, and the kids got soaked to the bone trying to gather up the Littens and get them inside the city.

Gloria lost one of her pokemon because of the food she was feeding it. There was a recall due to the glass being discovered in that batch, but for Gloria’s Linoone, it was too late. Marnie came by to help soothe her while her pokemon died in her lap.

Gloria helps train Marnie in the Sword and Board AU.

Froyo shreds any toy that squeaks. Even if it’s not his, he will shred it.

Gloria loves pretending to be ignorant about how many people ship her and Marnie. She loves it and retweets all the fanart she sees.

Marnie doesn’t like getting your typical sort of gift for Gloria. No jewelry for her, she knows Gloria wouldn’t wear it anyway. She’s more about things that are special to Gloria, like a soap themed for her birthstone.

Their favorite sort of dates are either just sitting at home on the couch watching b-rate movies or going to see Victor’s exhibition matches.

Gloria spent two months searching for a shiny Morpeko as a gift for Marnie once. Her starter Morpeko was getting lonely, and Marnie had commented that she thinks Morpeko wanted a friend. And so, two months. The one she found was a shiny pygmy, so about the size of a hamster and able to fit in Marnie’s palm. Marnie nicknamed that one Froyo. Morpeko loves Froyo.

Piers adores watching how his sister’s relationship grows and is 1000% willing to help Marnie write and perform a love song for Gloria. He’s got some ideas, he’s just waiting for Marnie to agree. She probably will. At some point.

Meowstic has, on multiple occasions, dragged Gloria to visit Marnie for no reason other than he didn’t want to battle that day and wanted to relax.

Gloria had the horrible idea of completing the currydex. So Marnie helped. They made a list of all the curry recipes and spent a week just gathering the berries. And they did nothing but make curry for three days. They were both just tired of curry at the end of it. Morpeko and Meowstic were not.

When one of them gets sick, the other will drop everything to go visit them. Once, Marnie got strep throat while Gloria was in Kalos with Hop. (Some study Sonia needed from the professor there so she sent Hop and he asked Gloria to come with.) Gloria couldn’t leave immediately, so she spent as much time as she could on the phone with Piers. Piers was acting as the middleman because Marnie couldn’t speak without pain.

Gloria has a few pokemon that are trained as alternates for her main team. Marnie helped her train and choose a lot of them, such as Sableye, Lucario, or Chandelure.

A tag battle against Gym Leader Marnie and (possible) Champion Gloria is a really, really bad idea. Even if Gloria isn’t using her pokemon that no one has been able to touch. Their pokemon know each other very well and absolutely will defend each other. Noivern has no qualms about picking up Morpeko to help her dodge a Stone Edge.

Gloria once spent a summer helping in the pokemon nursery. Marnie visited pretty often, even if she didn’t have anything she wanted to be bred. They had a great time with the Indeedee and helping care for the pokemon that were waiting for their trainer to return.

If Gloria needs to punch Bede, Marnie will hold her flower.

WE INTERRUPT THIS REGULARLY-SCHEDLED POSTING FOR A SPECIAL ANNOUNCEMENT!!!!!

I wanted to announce what Pokèmon ships I follow. However, don’t let this limit you to what asks you can ask!

(P.S. They are all Gay ships. Not sorry)

Hilda X Rosa X Bianca (my only OT3. Don’t even know if there’s a name for it, but I’m calling it UnovaGalShipping)

Those are the only ones I can think of off the top of my head.

greetings pokemon community it’s been a while 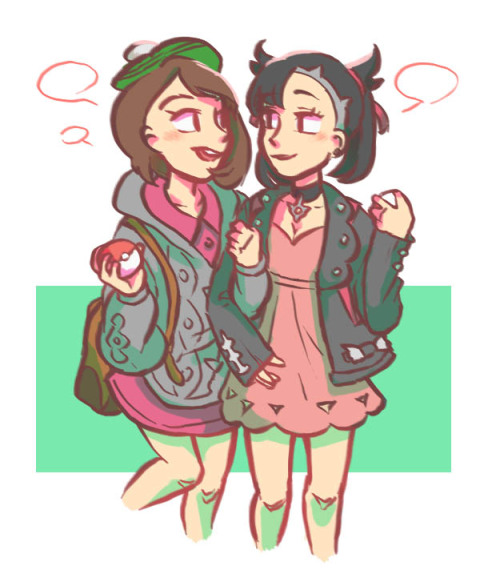 #pkmn swsh, #pkmn sword and shield, #pkmn gloria, #pkmn marnie, #gothgfshipping, #pkmn shipnames r really out there huh, #anyway spent an hour to make this little animation only to have the file nearly be corrupted, #so i apologize for the terrible quality, #and if anyone knows how to improve gif quality pls feel free to give some tips!, #velendart
214 notes · See All
pkmnomegaverseAnswer
Gloria would make a good Alpha, if she ends up with Marnie.

I’m still leaning towards her being an omega, but as Gloria has no development, nothing is set.

I just feel strongly about the idea that for females alphas, wearing a dress or a skirt would actually be considered unusual.  Breaking gender norms.  Which has its place and fits for certain characters (thus why I had Iris be an alpha despite wearing a fancy pink dress as Champion), but in general, when a girl is dressed in a skirt/dress, I tend to default to them being a beta or an omega.

You are right though about how Marnie and Gloria are fairly likely to be endgame now that Hop is with Allister!

bad morning today,thought I’d post the lesbians because I’m still touchstarved and they make me happy-

#pokemon, #pokemon sword and shield, #swsh, #gothgfshipping, #marnie pokemon, #gloria pokemon, #marnie, #gloria, #marnies just like 'oh.. don't think ive ever heard her call my name before..', #i hc this is where marnie confirms w herself.. that she likes gloria, #like shes had a feeling for a while but this was a peak for her :')
450 notes · See All
mugecommunismText
#gothgfshipping, #punkbarriershipping, #punkgloryshipping, #marnie, #gloria, #yuuri, #gloria x marnie, #my art, #shit post, #pokemon sword and shield, #hall of shame
206 notes · See All
micros0ftpaintText

Anyways these two are dating don’t @ me