And how books and their characters can fill that void a little (:

@pathologising and I about to break into the CDC if we don’t get this vaccine soon so we can be thots.

Fast growing Corona in eight states, doubled in 15 days in Maharashtra, more than 30,000 in a week in the country.

Fast growing Corona in eight states, doubled in 15 days in Maharashtra, more than 30,000 in a week in the country.

Casualties of tonight. Pen 2 birds freaked out and smashed into walls and flew out of the coop into the dark pen. I got out a minute later, thinking there was a predator, but I couldn’t find anything. They all went right back in when I turned the light on, and got right up onto the perch so I don’t think it was another animal, I think they were just spooked still. A hawk took a shot at them just before dark (obviously it did not succeed because it can’t get them through fencing), and the light turning off automatically I think scared them. Io and Corona were the worst and they were so flustered they let me carefully remove their yanked feathers without a fuss. I searched the whole coop and pen with Sark, and the other pens just to be sure, but nothing. I don’t think anyone was actually injured, either, just ruffled and missing a few feathers. I’ll check on them again before I go to sleep just to be sure.

I’m almost 14 and where can start driving >:D

But if corona stops me then idek the point of anything

I know the guy was being sarcastic.

But imagine if he was wasn’t.

Here’s another digital sketch from a interactive comic I made. It’s about the times of Corona (“In tijden van de ‘Rona”) at the second page the person says: “I haven’t been outside for 5 days…”
Maybe some of you can relate. I know I can. 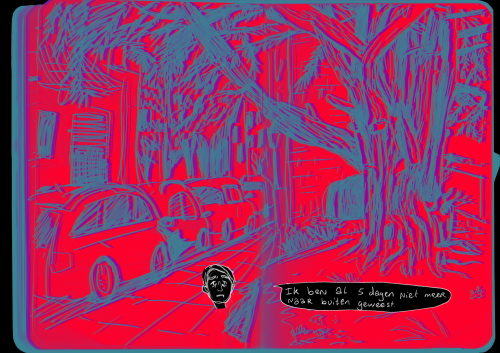