Remus hung his head low, focused on the gravel crunching under his steps. He  held his cloak close, inhaling the sweet, dried flowers scent. It was colored a dark, deep green and felt like a smooth mix between silk and cotton. He didn’t know exactly what it was made of, but he knew why the fabric felt sunshine on his skin.

Murmurs and shadows passed by him, all trying to hurry home before night fully took over. The sky was lit up in peachy pink and golden hues of dusk, wisps of cloud swirling within the light. Remus ran his fingers down the cracks of brick buildings, rubbing down the calluses. The gate’s shadow stretched across the streets, forests just behind. The bugs chattered eerily to each other, each excited about the upcoming night time. Remus was just as excited as them.

The last of the doors shut, the people of his town tucked safely into home. He doubted his absence  would be noticed by his family, as long as he returned by breakfast. He squeezed past the gate, bars uncomfortably hugging him before he wiggled free. Purposely losing weight was worth the ability to get past.

The forest buzzed with life from every corner, greeting Remus in various ways. One creature of the forest had stolen his very heart, completely by accident and without intention. Thankfully Remus hadn’t been turned into a toad yet, despite his offerings. He could tell that the creature was near, as the world suddenly seemed like a much better place.

Janus: Sorry for being late, Remus was being a bitch about pink again

Remus: this is not pink.. this is a colour trying to be red so bad!! *sniffling*

Janus: yeah, anyway. I will not get a pink couch, I guess.

#yes I like that, #bc I am aspec and like Remus and say so :), #big fan thank you, #ask, #remus sanders, #uni au
30 notes · See All
ask-me-and-my-annoying-roommateAnswer

Remus throws something that resembles a floppy yarn dream catcher at you. “You all keep trying to get me to tell you something and I don’t know!”

It takes Remus a full year to notice their flirting. (Janus and Logan are very thankful for that.)

#Roman has to physically point it out to him one time and Remus is like ?? OHHHHHHHHHHHHHHHHHHH-, #akskdkflgl, #ask, #remus sanders, #uni au, #loceit
31 notes · See All
ronnirottenText

Remus gets Virgil to watch him play a horror game with lots of jump scares. Virgil freaks out, like, he’ll scream if Remus turns to quickly and a door comes into frame, he gets that on edge, but he accepts the invitation. Remus is having fun and smiling and laughing and making Virgil’s heart race for other reasons so he decides it’s worth it. Of course he decided to play this game to have Virgil clinging to him for dear life and then demand he stays in Remus’ room for the night because he’s shook. The cuddles and goofy chatter about nonsense to calm Virgil are the highlight of Remus’ night—he’s such a softie deep down, and very very very gay. Virgil likes to have an excuse to snuggle with his crush.

If you use, please credit and tag me

yeahh so im making an entire au from the deceit!patton post! this is a shuffle?? au ig, i just vibed tbh

Deceit!Patton(obviously)- talked bout him a little in the previous post; his lies are white lies, half-truths, and the occasional lie of omission. He prefers to let the others come up with solutions, thinking of himself and what he represents as bad, forgetting he also represents self-preservation and self-care. His 6 arms serve two purposes: Hug Roman and eat *six* cookies like an absolute madlad. He’ll sit on the kitchen floor at 7am, yell “MY CHAOS KNOWS NO BOUNDS!” and eat straight from the cookie jar.(Spoiler alert: his chaos does know bounds, even he’s not heathen-ous enough to eat seven cookies😔). He has a mini powder-blue top hat with a white stripe.

Anxiety!Remus- Remus represents the more sporadic and neurotic parts of anxiety. Seeing demons in the shadows, hearing rustles in the bushes, imagining that because you took one(1) breath, you’ve killed god and fucked satan. He’s practically hallucinating 60% of the time, but yeah he’s fine👍. It takes hard facts and evidence to even slightly calm his nerves, so he and Roman have an “okay i will calm you cuz ur spazzing oh im attached to you as an older brother figure okay then” relationship. He’s probably still a gremlin in there, he’s just too zazzed from anxiety at all times to have any chaotic fun.

Creativity!Virgil- He has a more melancholy(am i using that right??) take on creativity. In writing, he’s hurt/comfort and angst with a happy ending. He loves the violin and can commonly be found playing his beautifully. He likes delicate, fragile voices in music(see Porcelain by Skott). He tends to keep his ideas for only Thomas’ eyes unless he gets sufficient validation from the other Sides. He’s quiet and thoughtful to an eccentric degree, at times seeming like he’s not fully there. His two common expression are neutral and puffed-out cheeks of concentration, making his soft, closed-eye smile an uncommon treasure. He has a few habits like putting his index finger to the corner or bottom of his mouth when talking or starting responses with “mmm”. Our sweet, lyrical son.

Logic!Roman- Roman’s knowledge tends to be on the..specific side. He could easily name every constellation in the sky or tell you the scientific titles of over 100 flowers, but it’ll take him a minute to remember what Benjamin Franklin did. Similar to canon Logan, he has a modern disconnect, but it’s more like he’ll have a crisis over what Obama’s last name is before someone explains that it’s an internet joke, and Obama is his last name just like Roman thought it was. He feels insecure about how he handles knowledge, but he really can’t help that it’s so much easier to learn things you actually want to learn! His gayness for Patton is immeasurable and he loves hates how weak he makes him.

I’ve spent 3+ days on this at this point in time, so apologies for these last two being less than formal.

Morality!Janus- “shit’s fucked, rules are wack, so be gay do crime” Don’t worry, he’s joking!… half-joking. He sees how subjective morality is and guides with self-satisfaction. He’s on the morally grey side, but he’s not the most trustworthy- Not because he’s deliberately lying, he just doesn’t have the best record for good solutions. He has fingerless gloves, will tip his hat and say “m'lady”.

Intrusive!Logan- He focuses on the scary parts of facts, and just randomly pops them into conversations. “Do you know how much of the ocean is unexplored? There could be anything lurking under there!” “Hey, what do you think would happen if you injected glowstick shit into your skull? Could you dye your brain?” “PATTON ANSWER ME DO YOU HAVE 2 FUCKING DICKS OR NOT!” Remus becomes frozen with horror at his ideas, but Logan genuinely takes it as “oh friend wants to stay and listen to me!!yey!”. The best way to deal with him is to just let him tucker himself out. Attentively listen to whatever he wants to frizzedly detail and chart about; eventually he’ll finish and be nothing more than a hyperactive child.

Remus narrows his eyes and speaks coldly. “No.”

Patton: Name one way to be nice to others.

Patton: …setting the bar a little low, but i’ll allow it.

Remus: Make those chemicals shake dude. Make them shake-a-rake around.

Logan: I am tRYing to do chEMISTRY, Remus!

#not countdown, #ts logan, #ts remus, #remus sanders, #logan sanders, #for anyone wondering, #i got inspiration from my chaotic bastard friend, #Soap.
12 notes · See All
sandysandsidesPhoto

A moodboard for a mood. 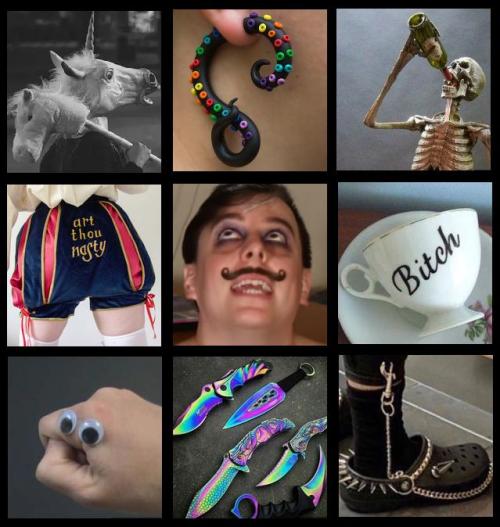 okay the album Blasterpiece by Bear Ghost is so incredibly Remus I don’t even know where to start, please go listen to like Necromancin Dancin or smth and you’ll see what i mean oh my GOSH

Roman: *begrudgingly begins dying his hair and mumbling in frustration*

i got fucking possessed by king creativity and he had me draw this because it’s what he looks like. also his name is aeneas. i don’t make the rules here i just blindy follow the screaming in my brain and it’s been slowly getting louder

Logan: Your cognitive processing is greatly impacted by your sleeping habits. The part of your brain responsible for functioning needs rest to function.

Patton: that’s in the foreheady lobe of the brain! See, Logan? I pay attention.

Can you even imagine how chaotic the Sanders Sides episode about Valentines Day would have been if Remus and Janus were already introduced (and maybe also accepted) at that point?

First of all, Janus would be like: “Wait… Why is there a girl here, Thomas? I thought we’re over this particular lie?”

Remus would probably made the episode complitely inappropriate and impossible to monetize… Also he’d most likely love Logan’s no nonsese, straight to the point approach and try to make it even more obnoxious and honest. Or he’d just respond to the flirting as if it had been directed at him.

When Patton said they should practise on each other Remus would immediately tackle him to the floor.

Janus would propose a list of pick-up lies… sorry, I totally meant pick-up lines. “Just tell them you’re super rich. That’ll do the trick.” (Remus, still on the floor with Patton: “I can show you some tricks! :3″) “Or better! Find someone rich! They’ll pay for your food. And transport. And house in the future, if you’ll do this right.”

Virgil would die halfway through the episode out of sheer embarassment.

Roman would desperately try to coax Janus into showing his actually flirty behaviour and use it for good at least once in his life. He’d also absolutely refuse to give his brother a single compliment at the end.

A Remus headcanon of mine