Okay but consider this

Imagine after Roman watches Tangled, he decides, “I want my hair to glow and do healing magic.”

So he does some magic shit and the next Roman goes questing with the famILY and someone gets hurt, Roman comes through like,

Plonks his head on the injury of the side and starts singing.

And everyone freaks the fuck out because Roman’s hair is GLOWING and the healing is actually working.

Meanwhile Logan.exe has stopped working because this is the most illogical thing he’s ever seen.

Remus: What if I did the same thing but on my pubes?

Logan: You’re not going to sing, are you?

Remus: And I’ll throw thing at you!

Roman: *shakes his head no*

Quote from Veggietales: Dave and the Giant Pickle

This is NOT what I was trying to google…

#ohmygosh, #sanders sides, #roman sanders, #you did not deserve this sweet prince, #lol I was looking up a ref and., #thanks google, #Oh no
1 notes · See All
more-incorect-quotesText

Roman: I did a little bit of spying on the dark sides. Do you want me to spill the beans?

Logan: Why would you ever intentionally spill beans? They’re one of nature’s most densely packed protein sources, and they remain unsullied by flavour.

(Another allegorical tale about my own mind.)

“I know,” Thomas said blandly, but not getting up from his position sprawled on the couch, phone in hand.

Virgil almost immediately rose up, a tense look on his face.

“Oh come on, Logan!” Patton said plaintively, also rising up. “I only just got him to calm down.”

“Thomas must finish the editing today. There is more to do after this pass of editing, and to get that done on time this must be done.”

Virgil let out a sound somewhere between a growl and a groan, pulling his hood tight over his face. “Thomas…”

this is what happens when u rewatch anastasia

#lucy.art, #remus deserves a fun villain song and canonically he kinda has one if u count forbidden fruit?? but he deserves another, #hey guys just came up w a joke is this anything forbidden fruit (derogatory), #also since i finally started naming my files well!! i actually know how many parts there are in this!!, #not how many frames bcuz stuff overlaps so its less than this actually but, #762 things i saved lol, #sanders sides, #sanders sides animatic, #remus sanders, #virgil sanders, #roman sanders, #ask to tag
53 notes · See All
boards-of-moodsText

It was normal for them been hanging out in the commons when they don’t have anything better to do, although Roman was acting weird for a few minutes now. He was changing his position a few times as he was sitting on the floor, with his elbows on the coffee table. Patton was sitting on the couch hugging a plush as he keeps looking at the TV, once in a while, he would look at Roman and look confused at him. He tried asking if was everything okay, where the creativity always answered yes.

The trait he was looking through, Logan was just sitting in his armchair reading a book, although for the past 10 minutes now he was looking directly at Roman’s eyes trying to understand what was happening with him? Maybe some type of disease? Or maybe Roman was just tired and needed to sleep? A lot of thoughts were passing by his mind.

Virgil for once was going down the stairs, yawning as he just woke up, with his phone up scrolling on Tumblr’s dashboard as he stops to look at the living room. A long and exaggerated sigh as he walks to sit next to Patton. “Ro you gotta stop doing that.” That was all he said as he kept scrolling on Tumblr.

“I’m not doing anything.” Roman answered in a frustrated sigh.

“Literally NOBODY knows what you’re doing.” Was all that Virgil could answer. “Also, you even said that doesn’t work! Why are you trying?!”

“Because I can!” The creative side was pouting as he crosses his arms over his chest.

Patton was confused by that, Logan was more confused as he nows doesn’t understand what Virgil and Roman were talking about.

“Uuuuugh… Ro, it’s L! He won’t understand that even if you try to explain!” Virgil was frustrated by that because the only side who would understand gay eyes was just Roman.

“For crying out loud… Logan, Roman is flirting with you, just go make out with him.” Virgil said straight, receiving a gasp from Roman who faces was more read than his sash, going all to his neck. And a puzzled look from Logan, but it didn’t take too much time for him to understand.

“Oh. I see. I shall do it then.” With that, the Logical side got up, picking Roman’s hand and so guiding him out of the living room.

“Geeez… I barely wake up and I have a headache already.” Virgil growled as he lays on the couch. Patton smiled gently. “Well, it seems you fixed the situation… How about I get you some tea and we can watch a movie?”

#just another sjw, #justanothersjw, #Virgil Sanders, #Roman Sanders, #Logan Sanders, #Patton Sanders, #Logince, #Can also be read as:, #LAMP, #CALM, #Moxiety, #[Although the last one isn't intended...], #[Hope you like it... not sure if it was what you had in mind.]
5 notes · See All
mimssidesAnswer

Sorry that it took so long, but here you go, my love❤️

Janus being stagnant and untrusting. Being convinced that he will never get to have a happy end.

Logan hiding his feelings and keeping his emotions to himself. Remembering that any proof of him having a heart could and would always be used against him.

Patton crying about relationships he lost. Boyfriends who used him but he missed nevertheless.

Remus staring at the ceiling as he lies in the now lukewarm water in the bathtub. Feeling like a nuisance and burden to all the people he knows after being told so by his very own father for years.

Roman kneeling in defeat in front of his mirror. Mourning over the opportunities he never got because of circumstances, bigotry, racism and his own cowardice.

Virgil locking himself in his room blasting his music far too loud so nobody would hear his breathing being out of control. Feeling guilty for feeling bad and needing help despite not having it as bad as his friends.

“Come on! Let’s do something!” Roman says and takes Janus by the hand. Makes him move and hope.

“Keep getting angry at our stupidity, bicho. I think without your reminder, we’d be lost,” Remus says as Patton gives Logan a kiss on top of his head. Reminds him that his passion was worth a lot more than people wanted him to believe.

“Thanks for always asking me if I wanna join. Thanks for never giving up on me and being kind even if I’m super rude sometimes. I’ll try getting better,” Virgil says awkwardly while patting Patton’s back. Letting him know that his trust isn’t so misplaced anymore.

“Out of the tub! The Voice starts soon and Patton made popcorn and hot chocolate and he refuses to start watching without you. So, do I but he is more annoying about it,” Logan signs and pulls out the plug in the tub to get Remus to move out of the tub. Proving him that he mattered in the most casual way.

“Let me give you a hug. You’ll feel better in a bit and then you’ll show me this monologue you practiced for your next play, okay?” Patton says as he sat down to Roman and took him in the arm. Around the edge of the door the others wait for Roman and somehow the lost time doesn’t hurt him so much anymore.

“Kid?” Janus enters and sits down next to him. “Do you know that without you, I might never have gotten together with Roman? That we might have lost him and Rem if you hadn’t called me out on it?”

Virgil calms. He catches his breath and looked at his uncle. Smiles a little.

“I’ve kinda taught you idiots that it’s okay to ask for help, haven’t I?”

Janus smiles and Virgil knows that he would be fine. 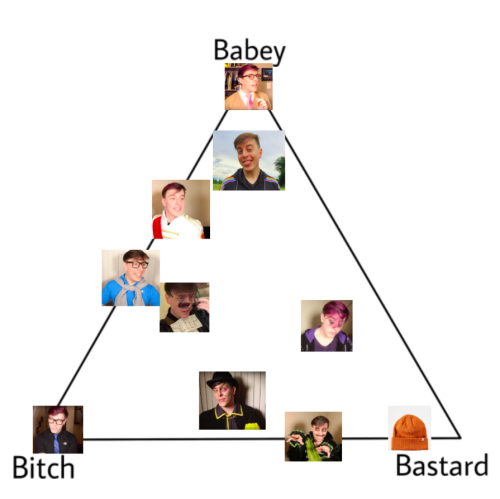 The sides as Christmas trees

Remy(not a tree but still):

Thanks for coming to my Ted Talk

Patton: Babe, what is this? *holds up deaged Remus*

Janus: *looks up for a second*

Patton: And this one? *holds up deaged Roman*

Janus: *looks up for a second*

Logan: I’m impressed. No one else could tell them apart.

Janus: Rip to you two but I know our kids apart by sight alone. 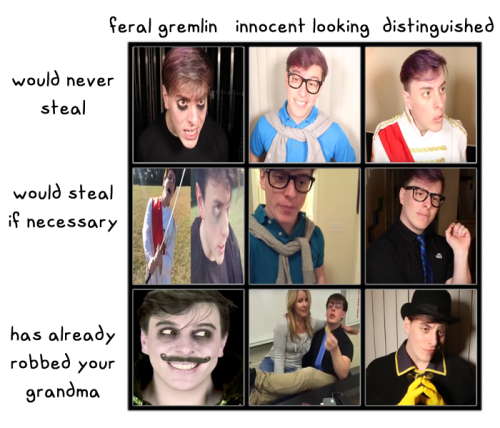 Patton uh… He’s got some issues. He struggles a lot with his feelings, specifically feeling sad or angry. He feels like he’s not supposed to feel like that and because of that he represses his feelings and puts on a happy mask all the time. He also deals with having absent parents who honestly kinda only pay the bills and give money for food and clothes and stuff but other than that they’re kinda never around. So he looks to the group as his found family. Remus is his best friend and is the only one Patton feels comfy being upset around and he can actually rant and let out his anger with Remus. Low-key squish vibes. Logan is like a little sibling to Patton and they have sleep overs and go out shopping a lot and act like straight white girls for shits and giggles. Virgil is a tiny mystery to Patton that he will never understand but still loves. Patton loves Roman, he really does it’s just… Stop trying to take care of others and take care of yourself, you himbo. And Patton and Janus vibe, they don’t really know each other but they vibe

Logan comes from sort of a nuculer family. He’s grown up in a suburban area with two parents and an older sibling, Aster. However, after the Crofters family moved things kinda changed a lot. Both siblings came out as gender queer and they were both accepted and Aster became very punk while Logan kinda vibed with a sloppy dark acedamia vibe. They kinda have burnt out gifted kid syndrome and are starting to struggle in school, especially since they chose to take all honors classes. But they honestly don’t care. They have their new friends and life is fine. How is their relationship with these friends? Well, Virgil is the only one in the same grade as them so they’re best friends with him. They don’t get why Virgil gets so blushy when they compliment them tho. And Pattons also their best friend cus they’re in marching band together. And they met the others through Virgil and kinda just vibe with them. They like Roman most out of the three upperclassmen tho.