Random thought I’d had, and have yet to see anyone address, (maybe I just missed it, and it’s been stated before, but whatever).

Allow me to take you back in time, back to before we got canonical answers in the show. Back to Sun Wukong’s debut as a character in season 1.

Blake runs away from her teammates - the rest of Team RWBY- when she accidentally outs herself as a Faunus due to Weiss’ then prejudice towards the Faunus race. In her running away, Blake encounters Sun, who compliments her removing her bow that she’d been using to hide her Faunus ears. Time passes, and we the audience are told that Blake’s been gone for several days (the lack of academic ramifications suggests it was the weekend, but I digress). And in that time, Team RWBY has been searching all over Vale for her after initially giving her time to come back on her own. But also, in that time she’d been in the company of Sun. And despite Blake’s initially brushing him off, she opens up about her time in the White Fang.

Now here’s what I got to thinking about:

The first point can be explained as part of Sun’s earnest nature. He won’t abandon someone he feels needs support, even if it’s from him, a stranger. Also, Sun is canonically not the kind of person to aid a person in exchange for a reward. He simply does good deeds just to help people. Additionally his behavior proves he’s extremely patient with people who don’t want to be with him.

Blake’s choosing to stay with him, and perhaps opening up to him in the first place could be because he’s a Faunus too. He’s the only other Faunus that Blake knew in Vale -aside from Velvet. That aside, the majority of what she’d opened up to him about is related to Faunus history, the creation and management of the White Fang, and their struggle for equality with Humankind. This could be because Sun showed that he didn’t really know much of the White Fang other than the general opinion of them, and the basic Faunus history.

But here’s the kicker.

Out of all people to open up to about her history as a White Fang member, it was Sun. My earlier explanations cover most of the why’s but there’s one other thing.

She could have felt it was okay because she was planning on running from the growing bond between them.

Happy thought: I nearly screamed when they kissed cuz YESSS THEY BOTH LOOKED SO CONTENT WITH LIFE AT THAT MOMENT

Angsty thought: I think ren might break down at seeing nora’s scars

More serious thought: Unfortunately sometimes when I think about it, that kiss may have been rushed. Not rushed as in bad writing, with nora being the impulsive soul she is, the kiss fit. I just feel she shouldn’t have done it at that moment. Especially since it seemed that ren was having alot of controversial feelings in his head. It was obvious they both have had these feelings for so long but since they’ve never talked about them, that kiss became somewhat of catalyst for their relationship issues at the moment. This is definitly not helped by their current differeing views about mantle. They both know their feelings at true but they didnt even seem to have time to think about what they were after that. I’m not sure how clear my thought process on this one comes across so I hope it makes some form of sense.

Hopeful thoughts: They need to talk. Like real deep heart to heart talk. It’ll be sad but heartwarming and beautiful and they’ll become even closer than they were before since they will understand eachother better

Random note: I feel like Ren is also trying to find himself, much like nora is rn. He doesnt want to feel like he’s only himself when he’s with her. I think this is why that Fiona’s comment upset him so much.

Hope I answered the question right 😅

Ask me about anything rwby related. Theories, ships, OCs, songs, characters, anything and I’d be happy to tell y'all what I think about them. :)

They explicitly stated that Nora is in bad shape. So I think we should mentally prepare for the possibility that Team JRY just might have to chose between continuing going after oscar, or going back to help their fallen teammate.

I know electricity gives her strength and its apart of her semblance, but her aura broke. It was confirmed that no aura means no semblance so right now her body is being forced to try to recover from extreme high voltage shock with no aid from her aura. Who’s the only one that we know can restore aura? Jaune. Where is Jaune? Currently chasing the nah bruh grimm.

I also say that the whole team would leave because if Jaune leaves and ren finds out its because Nora hes gonna leave too, and Yang is reckless but she not fighting a NEVER BEFORE SEEN TALKING GRIMM by herself.

Better case scenario, they send Jaune back to help Nora and Ren stays with Yang cuz he trusts his bro Jaune. Might even get some Renora and Bumbleby relationship talk between Ren and Yang.

I think the biggest ‘i have no idea how to feel’ about this development with Nuts and Dolts and the regression of Whiterose is that Penny and Ruby’s interactions are very intimate, but, also about as intimate as say Weiss and Yang hugging after their reunion or Ruby’s many times of being supportive of her friends, but, again, it’s hard to tell what’s platonic and what isn’t, and with me specifically it’s hard to go ‘well would I do x y and z with my friends?’ because I’m an equally affectionate person as Ruby with my own friends so I don’t have the best frame of reference?

Added on top of that is that Weiss and Ruby have had a lot of growth and development together, and the lack of them breathing in each others general direction doesn’t mean all of that growth and development vanished, Ruby letting Weiss go alone into the lions den despite promising the opposite doesn’t Thanos the scenes of the two playing tag on the train or Ruby cuddling up to Weiss on the Queen Lancer or Weiss remembering how she takes her coffee after several years…

But that doesn’t cancel out the fact that Penny and Ruby have had a lot of very sweet interactions and spent a lot of time supporting each other, either. If I saw any other characters acting that way I would’ve immediately been like ‘Ah yes gay rights’ but having a different OTP gives me enough pause to think through if those implications are there or not, but it still is very hard to tell.

It’s, complicated is what it is. Very very complicated and the usual ‘is she interested or just being nice’ debate that all wlw go through so, uh, good job for the realism CRWBY?

Ok two things annoyed me in the recent Chapters of Rwby……

I’m sorry if I sound like a jerk or anything but the people mainly responsible for Clovers death are Tyrian, for stabbing Clover. Qrow, for breaking Clovers aura and giving Tyrian an opening and Clover, for not trying to work with Qrow while there was an escaped Serial Killer among them.

It’s extremely hypocritical for Weiss or any of the others to call them cowards because they teamed up to defeat a threat they knew none of them could handle on their own. By that logic then all of the Huntsman and Huntresses are cowards!

They look so unamused.

— “Right through the central command!” Oh that should be fun.

— Aw shit, he found out about Penny.

— owo Nora has an idea

Yes, I remember the Ginyu Force.

O- Oh. I forgot about his semblance. 😳 Goddamn-

AND EVERYONE! CALLED IT! IRONWOOD IS WORKING WITH WATTS

Bitch why you trust HES GOING TO USE PENNY TO GET HIMSELF OUT!!!

Y'all curious here we got our NEW ep name and stuff!

Oh I forgot it was friday

How I think… where going to get a punch tomorrow

Vaco outfit or something and

A harbinger x the staff of creation I tried to make

To join in with her and promises

First time I draw summer rose and it’s a shitpost. Why am I not surprised?

Anywho this comic was based off of this post by @swan2swan because the second I saw it I just knew I had to draw it! 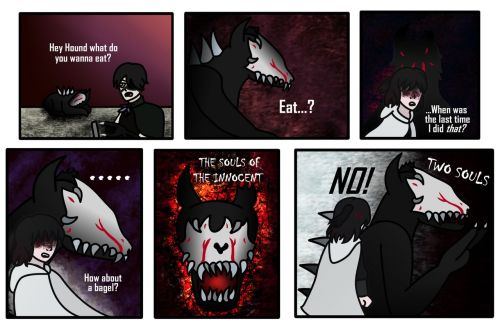 Thanks for coming to see

Whatever I did on the bottom