Harriet was injured in battle and either had to redesign it or had it redesigned (Because Atlas will always be Atlas) to include a bracer like what Winter is currently using.

It feels like that injury probably happened when Tortuga died.

New theory/headcanon: Summer and Raven were definitely partnered up at Beacon.

Why? Because as has been well-established by Ruby, Maria and even what little we’ve seen of Summer herself, Silver-Eyed Warriors are always loaded with death imagery and motifs (Ruby’s scythe/sniper rifle and red color scheme, Maria’s Grim Reaper/Day of the Dead aesthetic, Summer’s white cloak, etc). So of course Summer would end up having the girl named Raven who would also end up being a raven as her partner and also possibly/probably/definitely her girlfriend.

(And yes, crows do have plenty of association with death as well, but I think we can all agree that ravens tend to be even more closely associated. Quoth the Raven and all that. )

Was looking for an excuse to post something like this, when I found out it’s arospec awareness week! And if there’s any time to bring up aroace Ruby supremacy, this may be it. (Canon can bite me.)

(Alternate versions under the cut) 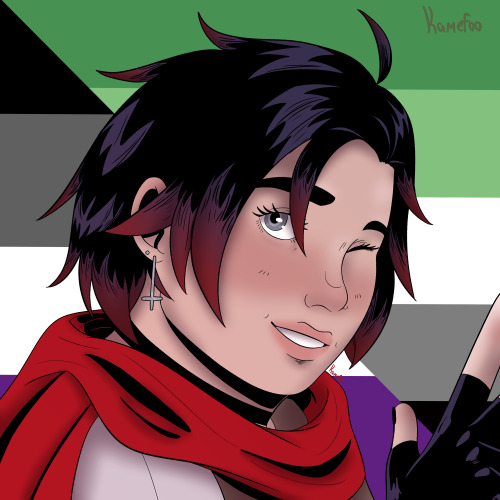 Okay so in RWBY there are the occasional references to real world media (Especially in earlier volumes) like ‘Spruce Willis’ and Daft Punk literally being the DJs at the Vol.2 dance.

So, with that in mind: There is an equivalent to the band Dragonforce somewhere in Remnant and Hunters absolutely love them, to the point where “Through the Fire and Flames” is considered an unofficial anthem.

This was in no small part inspired by hearing a cover version fom Jonathan Young….Also since Caleb Hyles was on the Vol.7 soundtrack and Caleb and Jonathan have done a lot of work together already I would love to hear Jonathan work on a song for RWBY

An: coming right up!

OKAY SO here are 6 for them. If you need more just ask 😍

Marrow loves headpats. He shows it when it’s just him and Weiss, but he gets a little flustered when she does it around others.

Marrow calls Weiss “Princess”, she says she hates it but secretly she likes it and it makes her blush. But only Marrow can call her by the nickname.

Marrow will randomly give Weiss flowers. Doesn’t need to be a specific or special occasion he just wants to make her smile.

Weiss calls Marrow “Puppy”, some of his actions remind her of a cute little puppy and that’s where the nickname came from. Marrow doesn’t mind it as it makes her happy.

Weiss loves having her hair played with, so when they are cuddled up together, Marrow will run his fingers through her hair.

What did qrow do or when he was born happened 🤔🤨🤨🤨

Of what we got

Something happened in the tribe witch my involved of

1 / tribe getting ambushed form the outsiders when he was born

*Crap gets DARK in this, just a wee bit though, nothing bad. Just a dysfunctional family. Last headcanon is sorta nsfw, if just depends on how you take it. It’s after the: Keep Reading.*

Headcanon’s are becoming my thing now, I guess:

Unlike Jaune, Saphron has mastered the art of making girls swoon over her. This was her final attempt, for the better.

Tyrian is 1000% neurodivergent , I just know it

Neo headcanon (again) : Neo was an orphan and was taken in by torchwick

Watts invented the hoverboard. We all saw Salem zooming like… home girl was on a hoverboard courtesy of Watts. He’s like ugh James never appreciated my genius, the hoverboard…

(for this I wasn’t sure if you wanted Volume 1 Cinder or the Volume 7 Cinder so I wrote for both!)

Come with me on this journey… big spoon Qrow and little spoon Ironwood.

As the big spoon Qrow is the prortective partner. He feels like he’s helping in a way his luck can’t fuck up.

As the little spoon Ironwood can truly relax because he knows someone he trusts has his back.

Thank you for your time

OKAY HEAR ME OUT:

Weiss teaches Whitley how to summon. Remember, it’s a semblance only the Schees (Winter, Weiss and now as we know, Willow) have inherited- meaning he too could have potentially inherited the ability.

Edit: to add onto this- maybe he always had the ability to do it- but could never unlock it due to how much of an oppressive influence Jacques had over him- and therefore initially resented the ability both his sisters have.

Maybe now that he’s slowly changing out of Jacques’ grasp- he could potentially unlock his semblance.

Hunters and Huntress, including those that have entered secondary combat’s schools such as Beacon, are required by law to donate sperm and egg cells. So that if they die in mission, the dna of their superior genetics lent towards fight will not be lost, as those that can enter places like Beacon are less than one tenth of those that actually enter primary combat schools, and as also the total population of Remnant is quite low being less than two hundred and fifty million.

There is governmental funding to encourage women to carry baby’s made from the union of such dna. The support women who carry babys born from these unions to term are quite lucrative, or going a step further and actually raising the baby to adulthood is quite beneficial.

Though, if the Hunter or Huntress is alive they are allowed to veto any fertilization, if they die that right goes to they’re family, if they have no family it is entirely in state hands.

On another note, Hunters and Huntresses are encouraged to have as many children as possible, with licensed hunters getting free medical care during pregnancy for them or their significant other, along with a stipend to take care of the child, with the stipend growing larger by number of children, with the benefit of large, large tax breaks, and medical care at reduced cost for children, and if they enter the Hunter Program getting free health care all together.

Though this may only be possible due to Hunters being a minority in terms of occupation. Or, since they are the bulwark that Grimm break upon.