With other authors I would be comfortable with saying that the Snape and Sirius parrallels had authorial intent, but with Rowling I’m not so sure.

The fact that she didn’t intend for Voldemort, Dumbledore, Harry and Snape to be stand ins for the three brothers and Death boggles the mind. It truly does. This isn’t just some small detail. This is a huge parallel that she apparently stumbled into by accident. It makes it so that unless she confirms it herself, it’s impossible to know if there was authorial intent or not.

Voldemort could really use this compliment :/

CHARITY BURBAGE HAD DIED BEFORE HIS EYES.

He was scared. He’d never been more afraid in his life and in that moment, it was written all over his face.

All his life, he’d been taught to hate. Blood purity was front and foremost –prejudice was drilled into him fervently.

He knew that as things got darker, this wasn’t what he wanted. None of it. To his parents, to Lucius Malfoy, that would make him a coward. It would make him stupid and unloveable, practically unbearable. So he said nothing.

At first, it felt good to be a bully. To mirror his father and talk down to those who had less than him. It felt good to know that he was powerful and that he resided at the top of the food chain and it felt fucking great to know that he could stand with the only thing capable of rivaling Harry Potter.

Maybe he’d done this all to please his father, to prove that some orphan that lived under a fucking staircase wasn’t- no- couldn’t be better than his own son. The son he’d given every opportunity, strong connections, and a steely and cold version of love that didn’t really feel like love at all.

Maybe he could have been friends with Potter, in some kind of alternate universe. In one where Draco weren’t outshined and shadowed by the stupid, reckless boy.

Or in another one, where Draco was a normal boy that didn’t spew hate towards anyone who challenged him. One who didn’t care if he was outshined.

He questioned whether or not he could exist quietly, if he was capable of not rubbing his wealth or status in someone’s face. He asked himself whether or not he really did enjoy shoving people into the dirt under his shoes.

It almost hurt to not be able to settle on an answer.

He knew deep down his father had believed he was raising his son in his image, to be cold and calculating. That was why he treated him the way he had. And in a way, he suceeded. But the damage of his upbringing snaked its way into every corner of his mind.

For more reasons that one, an easy one being that his father hadn’t taken Narcissa into account. He hadn’t expected her genes to weave so tightly into Draco.

He inherited his mother’s stubborness and intelligence. And it became this rebellious knot in his stomach, twisting deep down in his gut asking what made half-bloods or muggle-borns any less than him. It urged him to question the senseless and irrational anger that had clouded his whole life thus far.

From what Draco had seen, they were exceptional. More than, really. He noticed how Hermione had excelled despite her blood status and how Ravenclaws hadn’t consisted of only purebloods like Slytherin had.

Did that mean that being powerful had no relation to intelligence? Or that being pureblooded didn’t guarantee the immense skill and power he thought it had?

He noticed how the headmaster of the school wasn’t full blooded, and how rumors flurried that Voldemort himself wasn’t a pureblooded wizard either. It seemed some of the strongest wizards weren’t made up of their heritage, but rather their own personalities.

An excuse to hate, to blame. And as he was finding out, an excuse to kill.

Charity Burbage floated in front of him, contorted and controlled on the table. Her face was twisted in agony and fear. She pleaded for her life.

Charity Burbage, a stupid professor for a stupid subject at a stupid fucking school that he couldn’t stand.

He tried to summon the steel he knew coursed through his father.

A stupid professor for a stupid subject from a stupid school. He repeated to himself in his head. Over and over, but he struggled to mean it.

Draco tried not to focus on her words as she pleaded towards Severus, another Hogwarts professor.

“Severus please…” She choked out

Draco tensed, allowing a glance towards Snape. He was stoic and uncaring. His stomach turned uneasily.

Voldemort outstretched his wand and smiled, a toothy shark-like smile. Something akin to pure joy, which rattled Draco to his core.

She hit the table with a sickening thump.

Charity Burbage had died before his eyes.

Charity Burbage had died before his eyes.

Suddenly, he couldn’t control the way his lips parted to gasp and his face struck with fear.

She was a professor for a subject at the school that he attended. She was a teacher. She could have been his teacher if he weren’t so adamantly stubborn about attending Muggle Studies.

And now, she lay limply.

Lifelessly, her glossy eyes stared into Draco’s. They pleaded for the part of him deep down that questioned the Dark Lord. Questioned every single person at this table.

One of the great things about Tom Riddle is that no one, absolutely no one sees through his mask while the mask is on. Harry Potter himself thinks he’s hot shit, even while he’s standing over Ginny’s unconscious body. He basically has to straight up tell him that he’s Voldemort for Harry to believe him evil.

Good evening, I have included a compilation of the sneak peeks i did today, please enjoy at your convenience and have a lovely power bottom night:

Okay so hear me out

I’d like to know Voldemort’s opinion about Squibs that were born in ancient pure blood families, preferably a Slytherin family that supports him and believes in pureblood supremacy. If they were willing, woiuld Voldy accept the Squib in his ranks? How would the Squib be perceived? Would they be respected at all for their family’s status?

VOLDEMORT OI YOU COME HERE TO GET YOUR NOSE👃🏻

I’m so happy and proud of the last scene, particularly the last line, and I just wanna share it with everyone 😭😭😭

I love him so much. Why cannot every man in real life be like him? Men should support the children their wives have with other men! They should also support their wives even if it hurts them.

Luke Cage thought he was still a normal human. Or at least as normal as he use to be. However during his battle against the waterbenders, he discovered he did indeed gain a new ability. This made him excited, for a few minutes. He then remembered how they are supposed to get rid of these benders. Luke couldn’t help but wonder what the others would think. Would they banish him, torture him, he can’t take that chance. He’ll just try his best not to tell anyone, not to use his new abilities. What harm could it do to keep this to himself.

Voldemort loved his new team. It is much better than free lancing and much more enjoyable. He learned the ability to bloodbend and now utilizes this ability more than his own wand. After a year he learned of Avatar Aang’s ability to take away someone’s bending. Learning this he has devised a new technique to use bloodbending to do this instead. Now he had the Hulk, Bruce Banner, kneeling before him.

Voldemort: Give me a reason not to end you now!

Bruce: I want it gone. My bending, it has to go.

Voldemort: Very well! Then you must provide your services once I have taken your bending.

Bruce: Oka- *becomes limp and unable to control his body, as he slowly drops to his knees his head faces upward*

Voldemort: This will only hurt a little bit. *he smiles as he takes Bruce Banners bending abilities away*

Voldemort: *points to a servent* You, take him away! *he turns around and walks to his desk*

Bruce: *transforms into the Hulk and roars*

A few guards walk in and start shooting at the Hulk.

Hulk: *shields himself from the gunfire and jumps through the glass*

A few days later Bruce Banner’s body was found by Wolverine from the Non-Bending squad. He was then taken in and nursed back to health by the team.

Bruce: *wakes up and gets out of bed*

Barbara: *walks in* Hey, sit down. You might still be a bit out of it.

Barbara: Batgirl, but you could call me Barbara.

Bruce: You’d think after a few years I’d have the geography memorized but I still have no idea.

Barbara: Well, to make it clearer, you’re in a city filled with diverse groups. In other words, you’re safe from whoever you were running from.

It’s rather adorable to see clueless people trying to understand Bellatrix and Voldemort and getting it wrong.

‘They’re this. They do x because y. They’re that. *Insert a word-to-word, crammed reiteration of Dumbledore here*.’

Yes, that’s all very cute. Now will you shut up?

Lmao i got Vee fucking quoting poetry at Harry and bro still don’t recognize his own thirst, someone kill me

I’m scarred for life so you have to be too

guess who is my first ever digital sketch? 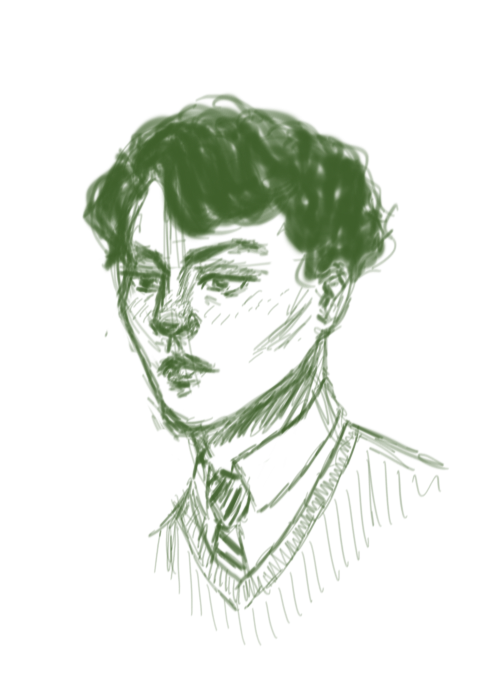