do I ever NOT think about it like kdkdjdjjrkr its licherally crazy it’s been over ten years and they had a total of like 7 minutes of screen time together and yet!!!!! they still got me in a death grip!!! the sheer chemistry???? the implications??? the TENSION???? but also the tenderness??? “just be back before the kick” “go to sleep mr. eames” like hello!!!!!!!! judicial authorities I wanna report a murder

#very in the mood to bury my face in between someone’s legs, #god, #girls are fucking immaculate, #p
0 notes · See All
michaelworonieckiPhoto

All over the world, people are hungry for the Gospel. Hungry for truth and understanding. Not a religion or system of service. But hungry for real answers to the issues of life. “Blessed are those who hunger and thirst for what is right, for they shall be satisfied” (Mt.5:6). So many people from all over the world are reaching out to me through email and text during this time from the contact on the flyers we distribute, like the ones this man is reading here. Prayer is powerful. Let’s not neglect the most important form of communication and tool God has given us.

#stayhome #nyc Όλη #μενουμεσπιτι
Today on @ertsocial Α.Ε. Broadcast In #Hellas #Greece, my friend and AHEPA Hermes 186 brother pharmacist @papaioannou.nick, and Ι @georgezouvelos spoke on the conditions here in NYC regarding the #coronavirus specifically the assisting others who are the most vulnerable in our society, the lack of masks, supplies, staff, swift testing, and storage of the deceased.

This is a short 3 minute clip, of the 1hr 40 min news broadcast on the 7PM primetime #Athens news.

Also, about how we #AHEPA #ΑΧΕΠΑ AHEPA District 6 @ahepad6 lodge of NY Governor Ilias I. Katsos emergency action, and the AHEPA HERMES CH 186, Astoria - New York City among with @iggyforsenate Senate brother Ignazio Iggy Terranova, Br.’s JohnKokolakis Louis Kokalis @peterargny Argyropoulos, and others, have been spearheading to assist the elderly and infirm in our neighborhoods.

It’s Time To Hide it’s Corona Virus Time! #God help us, the truth During the Coronavirus health crisis and #lockdown even as #spring has come upon us during The forced Stay Home because of #covid19 #cv #cv19 chinavirus chinesevirus #shelterinplace #quarantine #stayathome #Washyourhands #washhands #μένουμεσπίτι

Your talent is God’s gift to you. What you do with it is your gift back to God. -Leo Buscaglia

#religion, #jesus, #spirituality, #life, #inspiration, #quotes, #motivation, #god
15 notes · See All
a-tad-tradAnswer
Genuinely curious as I'm not religious. I understand theres a huge difference between the infamous "God hates gays" Christians and those like yourself. But if you view homosexuality as a sin and struggle that can be "overcome," what are they supposed to do in your logic? Stay single and alone forever? What would you do if that was you? It seems like heterosexual Christians view these issues from a "distance" and that they're tolerant of it only because it isn't affecting them or their family.

Also, if an LGBTQ person tried to “overcome their same sex attraction” by dating someone heterosexual, even marrying them, isn’t that a ticking time bomb? Do you actually believe homosexuality can really ever be overcome and someone can become straight? I’m genuinely curious as I was raised in a very secular environment. Apologies if I sound rude! What about marriages that end because one partner later comes out as gay, shocking their spouse and kids after years? That’s so heartbreaking to me. (question # 2)

American Christians are often stereotyped as the “God hates gays” guys, and I really don’t want to believe that! It’s just confusing, as there are many well known churches where I’m from (Canada) that perform gay marriages and openly welcome the LGBTQ, while American churches often come off as unclear or intolerant/bigoted (could be the media?) Again, I’m not trying to be disrespectful, just curious about this seemingly very wide spectrum of vastly different beliefs among Christian groups. (question #3)

Not sure if these questions are all from the same person, but regardless, since they are all on the same topic I am going to do my best to answer these questions here. There are a lot of them, so apologies if I miss one, or don’t fully answer, but I appreciate these genuine questions. You are not coming across as rude!

This is a sensitive topic but one that I don’t mind sharing my perspective on. I do believe that homosexuality is a sin, and sin is serious, but this does not mean that homosexual people are disgusting and deserve persecution. Quite the opposite, we are all sinners, and we should regard our brothers and sisters who struggle in this area with understanding, love, and grace.

This is a controversial opinion but I do believe that same sex attraction can be overcome. For this reason I usually say “same sex attracted” not gay/lesbian/ or any term that implies that this is an innate trait that you are born with. There are conditions for a same sex attraction to be overcome though. It requires the person who is struggling to surrender to God, to repent, and to desire a relationship with Christ more than the desires of their flesh. There are actually a few Christian voices who speak openly about their choice to love Christ and be loved by Him, over their desire to be attracted to the same sex. Some have actually said that they were more surprised than anyone when upon asking God to help them with these desires, God showed them their spouse, who they never would have thought they would be attracted to before. So yes, it is possible to overcome it if you sincerely love Christ and want to make His will your own. That doesn’t mean that you might not struggle with it ever again, but it does mean that you will not have to live a life where you feel chained down by those desires.

So a person who is still actively struggling with these desires should not get married thinking that that will fix things. It is also worth noting God does call specific people to a life of singleness, like the apostle Paul, and He uses single people for His kingdom work just like He uses married couples.

I am from Canada too, and I know that there are churches out there that say LGBTQ marriages and relationships are okay, but you have to understand that these churches are not following God’s word and are making their own exceptions. Any church that changes God’s word to suit their own agenda is a church that should be avoided. Although it makes them maybe seem nicer and more palatable for our Western sensibilities, if they are are not following the bible they have no foundation and have no credibility to preach God’s word if everything is just open to interpretation.

There are plenty of great churches out there that still preach the bible, yet they want to love and walk along side people who are same sex attracted. The churches that I have attended (non-denominational Christian churches) have never had a sermon where the pastor is condemning gay people and shaming them, but I have seen people coming through the doors of a church feeling confused, broken, dealing with all sorts of things, and they experience the love of Christ and their lives are changed forever. It’s beautiful how Christ can transform us all, not even just talking specifically about same sex attraction.

tl:dr - Homosexuality is a sin, but there is hope for people who struggle with this. Their hope is found in Jesus. In submitting to Him, they can be made a new creation, no longer chained down by those struggles, but living an authentic and full life in Christ’s love. There are churches that recognize this truth, yet don’t want to shame people or condemn them for these desires. Likewise, churches that deny homosexuality is a sin, and churches that want to persecute LGBTQ people are not accurate representations of what they church is called to be.

Hope that answers your question. If you do identify as LGBTQ please know that I don’t hate you, I love you, and Jesus loves you. ❤️

I noticed something I’d never noticed before in this passage of the Bible, and it really stuck out to me:

“[Jesus] withdrew about a stone’s throw beyond them, knelt down, and prayed, “Father, if you are willing, take this cup from me; yet not my will, but yours be done.” An angel from heaven appeared to him and strengthened him. And being in anguish, he prayed more earnestly, and his sweat was like drops of blood falling to the ground.” - Luke 22:41-44

It’s the line that said “An angel from heaven appeared to him and strengthened him.” And then AFTER that, Jesus still was so distressed that he sweated BLOOD. I always thought Jesus was alone in that time, suffering as much as any man could under the anguish of what he knew he would face on the cross.

But God sent an angel to strengthen Him, and that makes me wonder: how much worse would this already horrible looming threat be without that heavenly strength? How much more anguished can you get than SWEATING BLOOD?

It gave me a little glimmer of understanding: when we pray for help, and we’re still in grief despite our prayers, that doesn’t mean God didn’t send us help. It doesn’t mean He’s not giving us His strength to get through it. We want the pain to be GONE, we want to move past the problem entirely, so I think we tend to miss His strengthening. But there may be a reason we need to be in that place, or can’t come out of it yet. And whatever that reason is, God still doesn’t leave us alone in our suffering. We may not always recognize His strengthening, being focused only on the pain and fear and grief we feel; but He is there. He never leaves us to suffer alone.

It reminds me of this other passage:

“Blessed be the God and Father of our Lord Jesus Christ, the Father of mercies and God of all comfort, who comforts us in all our affliction, so that we may be able to comfort those who are in any affliction, with the comfort with which we ourselves are comforted by God. For as we share abundantly in Christ’s sufferings, so through Christ we share abundantly in comfort too.” - 2 Cor. 1:3-5

We can trust that He is with us, comforting us, strengthening us, when we call out to Him for help. The pain might not go away right away, but He is still there with us IN the pain. And even when we’re hurting, we can trust in His character: He is GOOD, He is our Comforter, and He has a plan even in our pain that will ultimately lead to joy for us and others. It’s hard to remember that in the middle of the trial, but I hope I can learn to remember it more.

#gratitude, #God, #thankful
0 notes · See All
immortalinkQuote
“Rachel getting married”
#quote, #movie, #god, #rachel getting married, #idk its pretty simple but it hit me in some way, #honestly i misheard it at first, #and thought its 'i dont wanna believe in a god that would forbid me', #so like someone who would demand me to forgive myself, #i like this version better
7 notes · See All
alien--fuckers--anonymousText

l am the righteous, the touched and holy
l am the voodoo that you want to believe
l am the angels that hold and surround you
l am the demon you’re afraid to need 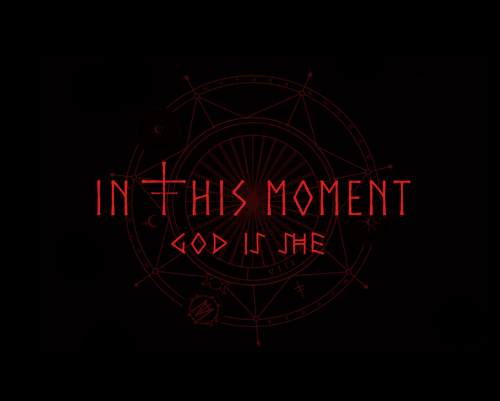 Ephesians 4:26 - Be angry, but do not be willing to sin. Do not let the sun set over your anger.

I WAS OUT ON A WALK. I WAS NOT PREPARED.