It wasn’t an odd sight to see the flower girl hovering near the tiny garden she kept in the corner of the school grounds, her arms elbow deep into the earth as she tended to seeds and sprouts that grew, preparing themselves for harvest came time for the colder months to come around. But it was new for the small figure to be hovering at her side, or the much bigger figure to be off towards the run down groundskeeping shed, lugging bags of fertiliser around this way and back.

A way to build up an understanding of the world around her, Eri had taken a liking to you as soon as you had spoken to her, and soon enough she began offering to help tend to the garden as well as she took the time to get used to how to hold the hose. Tiny fingers gripping the bendy plastic as your guided her hands to water the crops, the hat you had loaned her being too big on her head, having to help her readjust it every few seconds as it slid down to cover her eyes, the young girl only giving a laugh every time it happened.

It brought a smile to the blonde’s face as he watched on, seeing the two girls that brightened up his life smiling and enjoying each other’s company. It made him forget about all the pain he felt just to get them here, even just for a little while, seeing Eri smile as she looked at his flower, and the flowers in her hair blossoming a beautiful yellow, his heart would melt every time.

And his smile would always melt yours.

It was almost like a small family, a structure that may have been odd to Eri if she hadn’t noticed it already, Mirio placing down a bag of fertiliser on the ground as he tried his best to listen in on the conversation, pretending as if he was busy as he opened the bag, beginning to gently lay down the foul-smelling material on top of the plants like a blanket to tuck a newborn in goodnight, though as his eyes focused on you and the bloom of yellow in your hair, he couldn’t help but think to himself that he would want to have a family with you.

I am attempting to go back to drawing so for now please accept this small doodle! I might try to draw some asks but I don’t expect much to do q.q

//note: I decided to make the flowers Chrysanthemums/mums due to the fact they come in a range of colours to better fit the story

Sometimes you loved your quirk, sometimes you hated it, the mums that grew in your hair blooming and withering at all times of day in a beautiful bloom of flowers. People could read you like a book because of this, and it was something that you couldn’t hide, however what you had yet to see what more than one colour appear. Tamaki was glad because of this, as it was easier to tell if he had upset you, probably one of the many reasons that he had gravitated into your orbit and found you to be enjoyable company.

The constant blooming, the way that your eyes matched the colour of your hair, he didn’t even need to hear you at all to know your mood. The Mums did all the talking for him. Blue had been a colour he had grown to hate on you, knowing that it was the colour of your tears that would run down your face, or red, knowing that something had caused you to become frustrated, but when yellow appeared as golden as the sun he knew that you were fine.

But then more than one colour had begun to appear at a time.

And that’s why he sat there across from you, staring at your hair as he listened to you talk. He hadn’t been sure if you had noticed it yet, but your mums had been blooming in all sorts of colours as of recent, the young male not even getting the chance to ask why as you constantly had been running away. Each time he went to ask, you’d just run and hide and return when everything was back to normal, but his attention was now fixated, captivated by the small mums that had bloomed on the top of your head in an array of gorgeous colours. It was small though, not the flurry of beauty that he had been seeing from the little glimpses he was able to capture before you’d hide.

But you were distant, happy, allowing him to finally see the colours dancing, mingling, blooming in a way that he couldn’t describe, though as his eyes focused back on your face, he realised he had been caught. “You were… staring at them,  weren’t you?” Your voice lingered across the table, cheeks tinged a bit pink as more mums began to grow, the hair that was there becoming covered in them as you reached to hide behind your hair. “I don’t know why it’s been happening lately!” and frankly, neither did he, but reaching a hand across the table to pull some of the flowers from your face, your hair exploded, Tamaki taken aback as the flowers seemed to burst from your head, a bouquet appearing before his eyes in an explosion of colour.

Oh, it was because of him.

《Sorry for the weight, drawing Marpesia was fun. Sadly I couldn’t get around with finishing it digitally.》

Hello everyone! I should’ve done something else before and that is to introduce the characters. I will be uploading the other characters and an updated one for Poppy for the blog. But I will also be still accepting and doing asks in the meantime

Anyone who already knows the upcoming or slightly shown characters are free to ask them anything.

“A story about love? I have…none of my own, but… Brooke Rose told me one once - her kind can convey stories in interesting ways, and I was able to write it down in a sort of novel form. Does a story about protecting loved ones count as a story about love?” The Archivist opens a tome pulled from the shelf, opening it to a page marked with a purple ribbon.

💧I swear I’m alive, just very low on asks haha but here’s a drawing I made for this account!! I wanted to try something new so this will be something I’ll work on more!

Ann: A story about stars? Well, I do remember a lot of nights when I was at the church and I would always be the one with a very late shift to take down left over sheets that other sisters wouldn’t get. It was honestly very relaxing, I rather do enjoy being able to take such a task. The air was always fresh and it was peaceful, no noises besides the sleeping creatures of the night. Sometimes, I would stay outside longer and wonder what kind of life I would live, what greater things would there be for me if I had become a normal woman rather than a nun… I dont regret it.

Bane: Night time was the time I worked best at. Most people would always be stupif enough to go to the manor at night, unaware of traps laid out and sometimes I would catch some stupid kids stuck in a tree or God forbid them caught in a bear trap. You’d think the keep out signs would stop them, it never did. Even so, nights could be peaceful. I rather enjoyed whenever the forest was silent and my deer companion visited, looking up into the sky, knowing that everything would be OK. As a resident and the grounds keeper of the manor, it was my job to make sure everything was ok. It was something i can control and that eased my worry and concern for my wild friends.

💮I have valid reason as to my inactivity here and the rest of my blogs. I have accomplished one of my many wishes, getting a Badge! I am working on school and something spicy(?) for the blog so I hope you all enjoy it.

AWWW THANK YOUUUU SO MUCH

#Flowwerpot, #Stop being so nice, #>:^|, #yall makin me cry
7 notes · See All
askdoodleseerAnswer
I wanna smooch ur forehead but u made me cry too u,v,u

(( Nuuuu, don’t cry, I’m sorry!
But more seriously, I love your blogs! I really love your characters, canon or OCs! All of them are amazing! I love you art, it’s really adorable and it’s just so lovely! úwù
I hope you have an amazing day! ))

#[ error speaks ], #flowwerpot
6 notes · See All
cantatricksAnswer
🎨any of them bb

let me draw ur muse

you got it bb

[Yeah hi, Happy Valentines day. This took some time and I feel like I could’ve done more but I’m packed :“) please enjoy this heart crystal Blaesop had found.]

Welcome to the crew, fellow punmeister. I had a giggle there (☞ﾟヮﾟ)☞

#flowwerpot, #ariu's reply, #punmeisters in their natural habitat
12 notes · See All
identityvarchivesAnswer
*Waltz in* I'm here for the matchups ;). I'm a Scorpio, I'm small and petite. I like art and music but I also am very selfless. I believe if I were to be in the manor I would be taking an assist/support role as a survivor. As for Hunter, I'm not entirely sure? I don't mind either gender or if its a hunter or not. I'm a fan of symbolism and the unknown ♡ and I chose non anon because I wanna call myself out ♡

I would have called you out either way hA H- Anyway, I hope you like my choice~

The survivor you got is: Martha Behamfil (Coordinator)

Why? For the love of her, you can’t kite for more than 60 seconds unless you have an item that could help you kite the hunter longer. So as a rescuer, Martha naturally feels inclined to protect you. Small and petite? She’s going to love hugging you and giving you affectionate kisses on the cheek because she thinks you’re adorable. Your short stature makes it easier for her to body block for you after rescuing you from the rocket chair as well, and she can just shove you into a small space before kiting the hunter in your place. She’s going to be aware that you’re selfless - self-sacrificing even - so you can expect her to come to your rescue immediately the moment word that you’re in trouble reaches her.

Although Martha has the skills a typical lady should have, she’s not as passionate about art and music like you, but that doesn’t mean she won’t be impressed by your artistic and musical abilities. She would ask you to draw her or maybe even play a piece for her, just so you can be more confident about yourself. After all, you’re a unique person in her eyes 💖

I did this for me and @flowwerpot because I am get into the process of drawing. 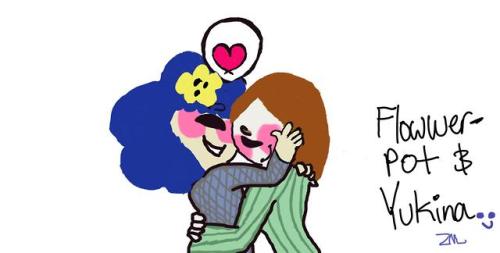 #flowwerpot, #yukina, #bad art
1 notes · See All
softpedropascalAnswer
Everyone is enjoying overwatch and here i am suffering because i cant get it rip. I saw the video omg that was so cool

Well, I hope you’re able to get it soon! and thank you!

#flowwerpot
6 notes · See All
Next Page