“Witching in the Kitchen” 🎃🌿🕷️
.
And I thought this will be a quick one to finish 🤪 welp… This “halloween card” was inspired by some “vintage” spooky themed songs I found on youtube… 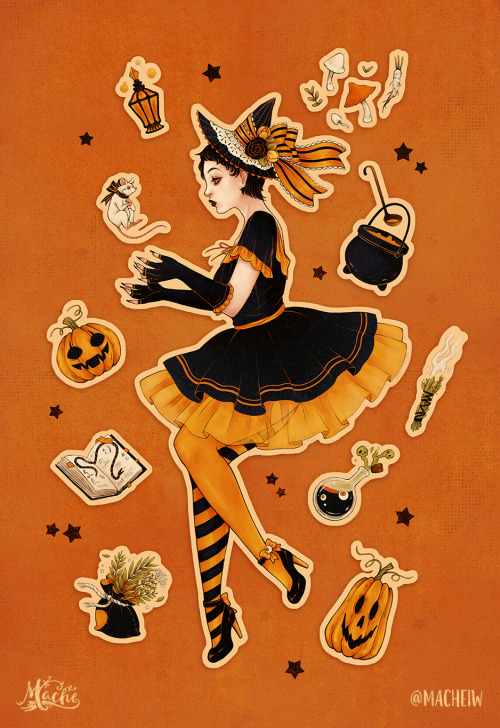 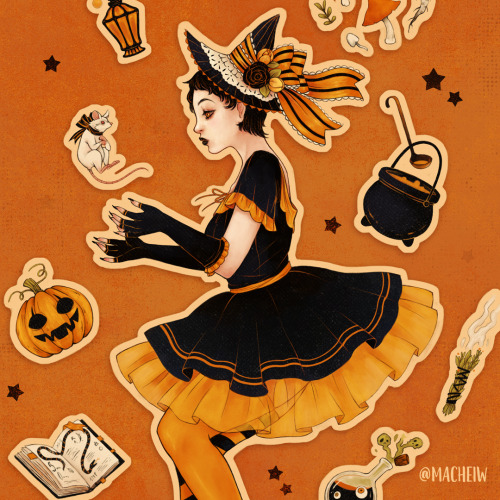 Pastel collar, about 33cm/13" long (can be adjusted) and about 6cm wide. Body is machine-sewn, details are hand-sewn.

Maybe you will find matching hair bow in stock? Let’s check it out :) https://www.etsy.com/shop/Nekollars?ref=l2-shopheader-name§ion_id=21523287

It’s already made and ready to send to you immediattely.

Closure: D-rings and satin ribbon (which is of course included) 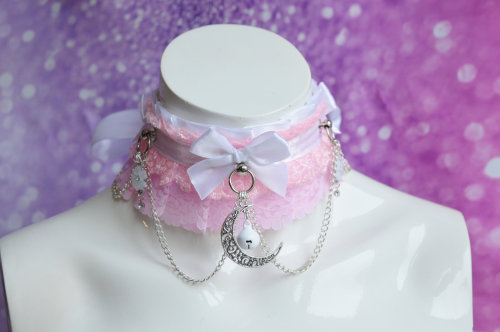 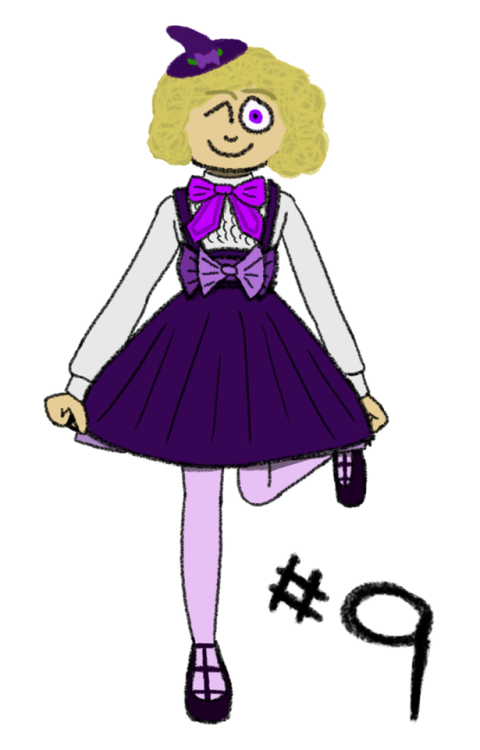 I love pear-shaped girls so much

Name meaning: Apolline is a vintage French, derived from the sun god Apollo, while Lycotonum is Greek meaning “Wolf’s bane” and refers the plant of the same name.

Appearance: Apolline is a beautiful girl with dark voluminous wavy hair that reaches her hips which she often tucks under wigs, fair skin, small button nose, almond shaped eyes, one red, the other green-blue, with pupil shape similar to a typical demon, which she can disguise to appear as normal eyes, slightly plump lips, and curved eyebrows. She’s noted to be tall, being 5'10" and is noted to be rather curvaceous and slightly chubby. Apolline’s typical style is lolita fashion, not a specific category, she’ll change it up some weeks she’ll dress sweet lolita, others it’ll be gothic, and she also owns “normal” clothing such as T-shirts and jeans for when heavy lifting is required, or she doesn’t have the time to dress up.

Personality: Apolline is suave, but she loves to use insults, sass and banter. She uses smooth, gratuitous sexual innuendo in an effort to make people uncomfortable and therefore give herself an advantage. She is a survivor at heart, and will use any means to accomplish this goal. In fact, she tends to only lose her temper when her personal safety is threatened or when dealing with what she considers overwhelming stupidity. Apolline at times appears incredibly volatile under her smooth and charming personality, as when she has screamed at multiple people, including Andrew and Nicole Lee, when appearing calm only seconds before.

She shows tendencies that can be seen as mischievous by her mother, and devious by others, such as causing a fire hydrant to explode in order to flood a street, or causing a teacher’s car to explode. One very disturbing detail about Apolline is that she has a massive crush on Lucifer, getting flustered when she can sense his presence. The general population of the school she goes to hates her, as she remodeled the whole surrounding neighborhood, forced the principal to adapt stricter policies, and forced parents to sign contracts that made them agree that whatever their child did was their responsibility, but they can’t do much as there is the constant looming threat of her ruining everyone in the school with a snap of her fingers. She describes herself as a young lady with refined, and classical tastes, having her school rebuilt so it was a French gothic style, her room being filled with classic literature in its original language, her home being modeled after Greco-Roman architecture, etc. etc.

There are so many ways to describe this girl, but the easiest way to do so was through Apollo’s lyre, which played a tune with loud, heavy beats that almost stopped Samson’s heart, all because she touched the lyre.

Dislikes: Blue, cats, when her father bothers her, tomatoes, chunky tomato sauces, when her dresses get ruined, clothing with religious ties or imagery, modern sports (such as football, soccer, basketball, baseball etc. etc.)

Abilities: Apolline was born to a witch mother, and a demon father which has numerous advantages, Apolline knows magic, to start. Her specialty being elemental-based magic, specifically earth-based magic, turning any object made from the earth to protect her and to attack for her. There’s a special place in her heart for the abilities she gained from her demonic heritage, such as telekinesis, which she occasionally uses to toy with classmates. There’s also self-healing, Apolline can heal herself from vast array of wounds, small or large, due to a self-preservation seal that her mother put on her when she was born, the seal can heal her, and can bring her back from the dead unless someone kills her with a special knife made to kill her kind.

Like most demons, full or partial, Apolline can be harmed by crosses, holy water, holy oil, or spoken passages from the bible, if someone were to try and perform an exorcism on her it would cause excruciating pain, resulting in her eyes beginning to bleed and a rash appearing on her body. It’s not just Christian iconography that can harm her, iconography from all Abrahamic religions can harm her, even once she couldn’t be in a graveyard because there was a grave marker with a Star of David on it. Other weaknesses include blood of a holy man, such as priest, monks, rabbis, etc., certain sigils and seals, angel weapons, being unable to enter holy sites, and manipulation collars. Another weakness, which considered strange by many but true for all female witches, is that if you cut off a certain amount of her hair, it causes her to lose her magic, which will tick her off, and it means she has to wait until her hair grows back for her to use her magic.

Lucinda taught Apolline many things, one of them was multilingualism, Apolline knows almost all Germanic languages, with Turkish being her first language, and some very ancient languages such as Aramaic, Akkadian, and Persian, the only problem is that due to her age and where she lives there really is no use to knowing that many languages, unless it’s for spell work. Whenever she uses her magic, her eyes begin to glow, and temperature begins to drop, the downside to using her demonic abilities is that she needs to eat souls, 50 souls to be exact, she has been able to find loopholes, eating souls of animals, but there are times when she really needs it, so she’ll eat the souls of random people.

Background: Apolline Lycotonum was born on May 24 1994, to Lucinda Lycotonum, a witch from year 1444, and Belphegor, a demon and a lieutenant in Hell. Lucinda originally planned to hide the identity of the father until Apolline was 18, but Lucinda’s mother Korinna kept pressing the matter, so Lucinda killed her before Apolline was born. Apolline was raised in Turkey, for no particular reason besides the fact that her mother liked Turkish baths, during her early childhood she remembers her mother training her to use magic, usually in questionable methods, such as throwing her into the ocean, stranding the two in the middle of a jungle, or having Apolline perform a handstand and holding that position while reading a spell book. When she was 8 her mother sold her to be a millionaire’s servant, but in reality her mother wanted to steal a grimoire from the wife, so after months of infiltration Apolline finally located the grimoire and was getting ready to steal it, but was caught by the wife who tried to kill her, with no other choice Apolline killed the whole household, and ran off with the book. After Apolline returned with the book, mother and daughter pack their bags and fled to America. When she was 10 Apolline met her father, on complete accident, Apolline was defending herself from an angel that came to smite her after she opened a spell book, she tried the first spell she set her eyes on, which was a demon summoning spell, her father Belphegor rose from the pits of Hell and killed the angel. Belphegor called her Lucinda at first, mistaking the young girl for her mother, causing Apolline to become confused, and the two slowly realized that they were father and daughter. Apolline questioned her mother, and Lucinda confirmed that Belphegor was her father.

Nothing much happens afterward, but Apolline’s debut episode begins with her being responsible for siccing hellhounds on people.

Family Name Lore: The Lycotonum Coven originally started as a high class coven known as the Ricinus Coven, that had a rivalry with Liulfr Coven dated back to Alexander the Great’s time. This rivalry was like war, it was a constant cycle of killing and robbing, until Lucinda was born in 1444, Silas, Apolline’s grandfather, married into the family from a Mongolian coven, he changed his name after marrying Korinna, and led a night time mission to end the rivalry. Silas led the coven to the home that the Liulfr Coven lived in, and ambushed the coven, killing almost all except the 5 defect children, he left those children alone so they can warn other covens not to mess with the Ricinus Coven. After Liulfr Massacre, Silas requested that the coven change the name to Lycotonum to mock the surviving members of Liulfr, as Liulfr means “Wolf” and Lycotonum means “Wolf’s Bane”. 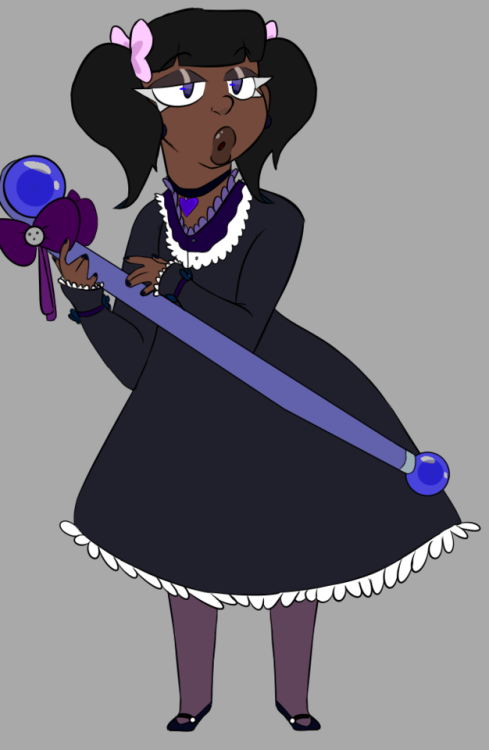 Lolita witch for inktober day 9!! Tried a thick pen for once and that was fun! Tomorrow is the wicked witch and I’m super excited for that!! 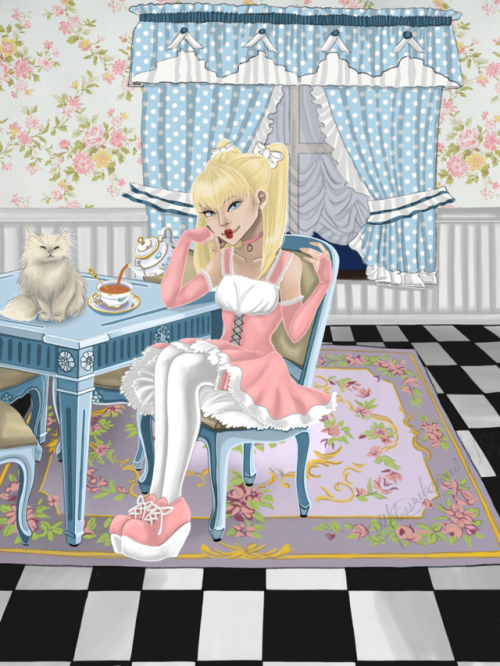 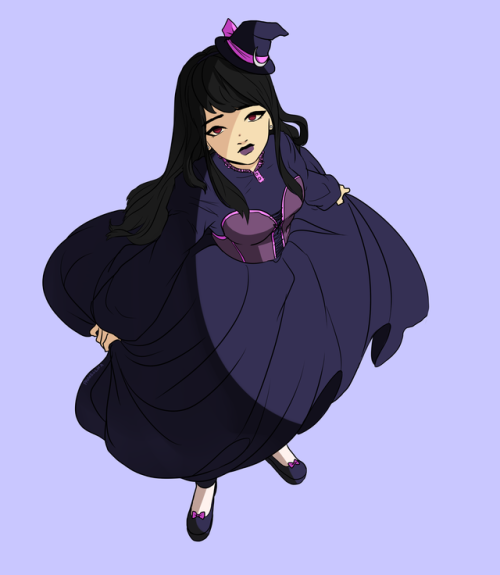 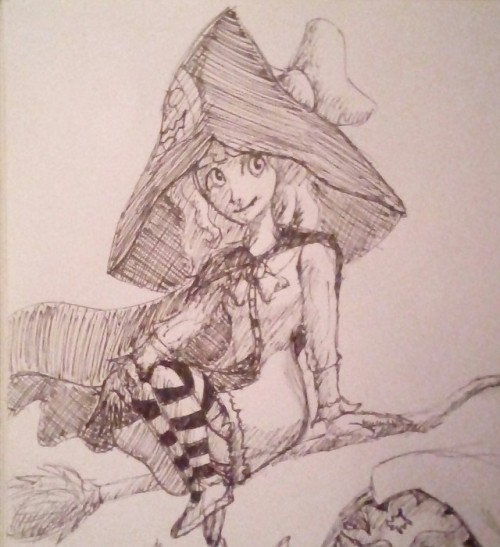 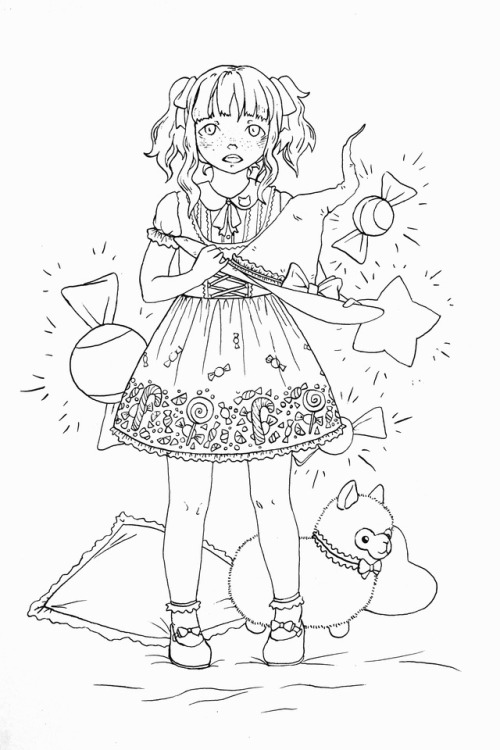 So I saw this really cute lolita dress that reminded me of Kiki’s Delivery Service and was inspired to draw Kiki and Jiji! 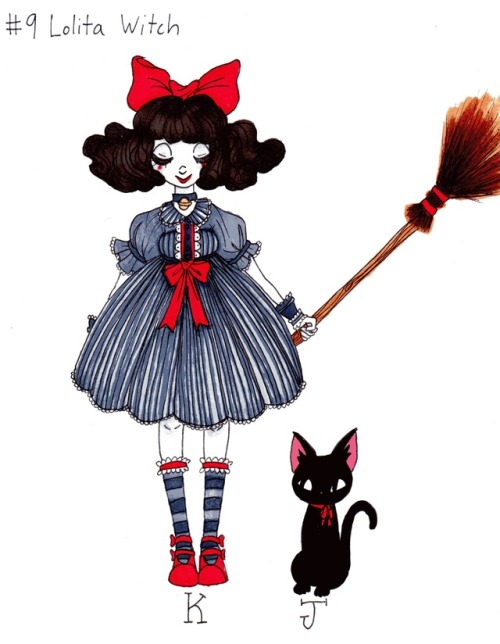 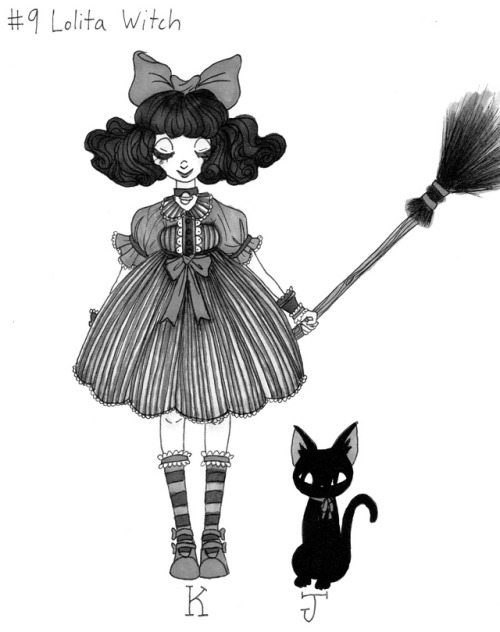 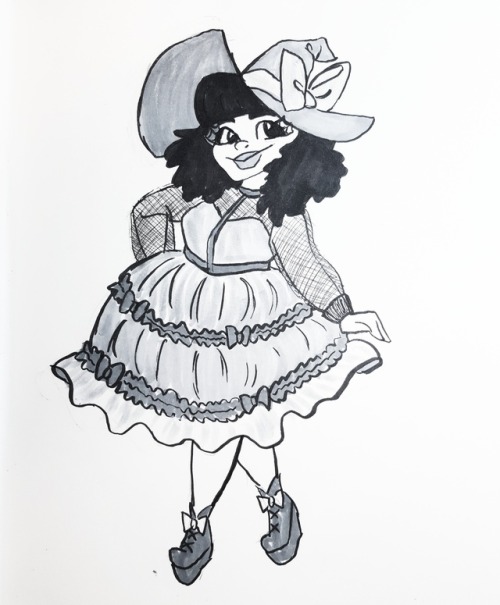 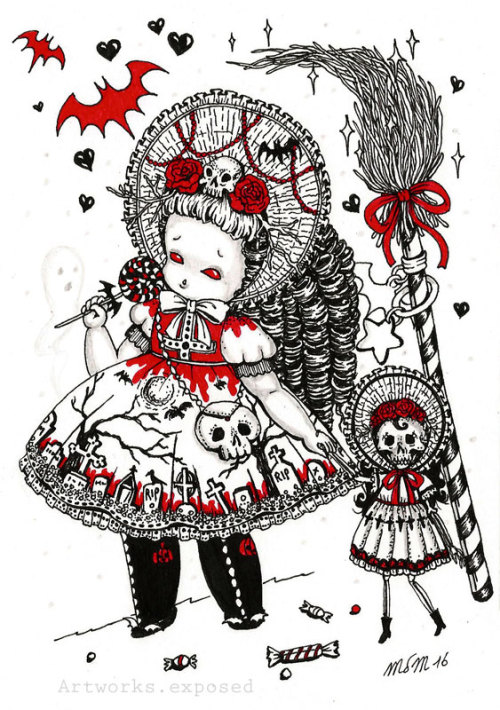 My high school self would be so disappointed in me right now. How to lolita? Currently trying to catch up to inktober. 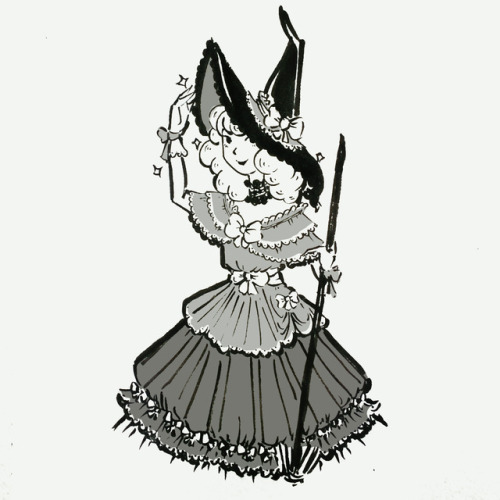 Inktober the 9th!
Lolita Witch! I think that I want to redo this one sometime. I want to add more frills when I’m not so tired, haha. 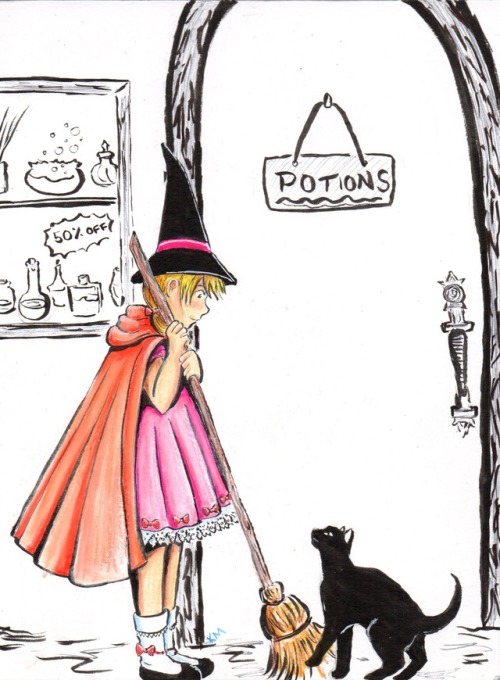 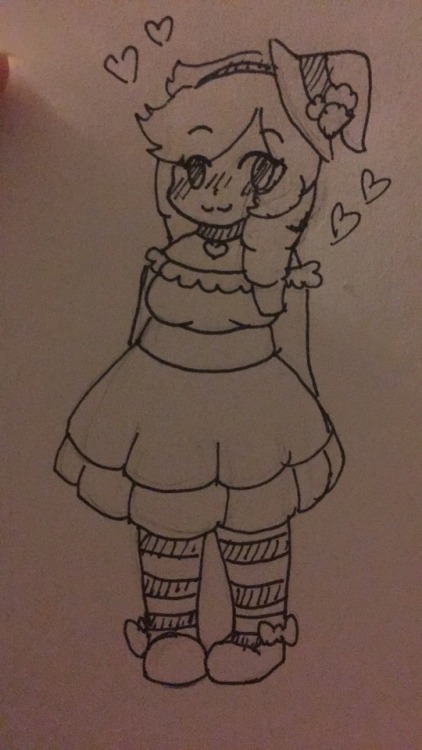 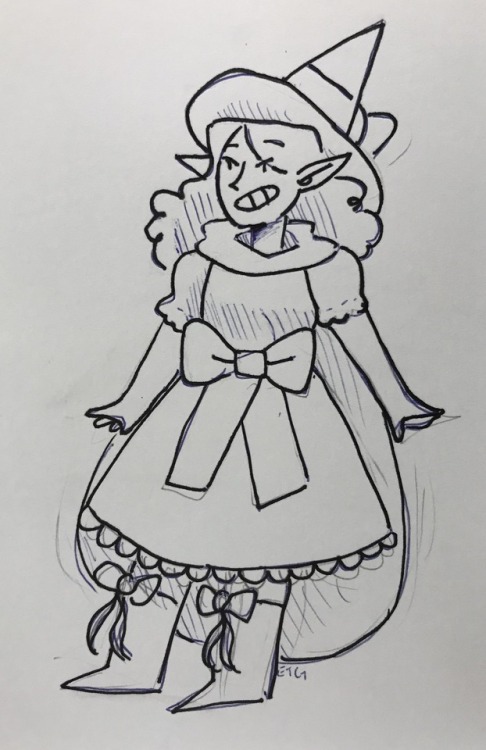