Grabbing onto the opportunity and jump into your arms, hoping you will catch me.

Taking in the surroundings, everything felt surreal, because next to Stiles was Derek. Sitting. Looking at the stars. With Stiles. Alone, and the night was straight out beautiful. There were no clouds touching the sky and the amount of stars almost gave Stiles a creepy feeling. Or, maybe it’s more of a scary feeling. Like, seeing the night sky right at that moment made Stiles realize how small they truly were in the universe. That realisation was really too much for his brain to handle, especially now with the medication wearing off. But, never in his life would he go home to take them. Not when Derek was willingly staying by his side, even if everyone else left them a while ago.

Remembering the night with the old gang, Stiles was even more sure that taking a break after finishing the Academy had been good for his health. Also, living with his dad again had been awesome. But, now was just the thing of figuring out what to do next.

”The silence is sometimes more loud than your actual voice” the sound of the other male’s voice made Stiles leave the one glowing star he’d stared at, to gaze at the stubbled face, who’s not looking back at him. Instead the sky held Derek’s focus, which gave Stiles the opportunity to admire his profile without feeling like a weirdo.

Stiles snorted when he realized what Derek’d said ”Thought you prefered the silence” turning his head to the view of Beacon Hills. In the corner of his eye he saw Derek’s shrug.

”Yeah, but now I’m used to it” Stiles lungs protested, because he’d suddenly stopped breathing by the softness in Derek’s voice when saying those words.

Stiles let out the leftover air in his lungs in a breathy ”Oh” when those old feelings, and who would he be kidding with that Derek still didn’t hold Stiles’s heart, came rushing into his chest. Those overwhelming feelings Stiles’d tried to ignore for so long was now making his bottom lip sting by how hard he was biting down on it.

The nightblue sky gave away a sudden bright light and Stiles’s lips grew into the biggest smile, forgetting everything for a moment.

”A shooting star!” He exclaimed, pointing like a child at the moving star. A puff of air against Stiles’s cheek made him realize he’d moved without knowing. Derek’s face was just an inch from Stiles’s.

With a roll of his eyes, Derek smiled ”No way, you don’t say. I didn’t notice” and that smile did stuff to Stiles’s inside.

”Close your eyes!” Stiles blurted out to keep Derek from meeting his gaze, if he did Stiles wouldn’t have the nerve to follow through, and this was once in a lifetime moment. ”Quickly, do it!” he added when Derek looked deadpan at him, then explained ”We’re going to make a wish”.

Holy shit, was the only thing Stiles’s brain could manage when Derek did as told, but of course not without a sigh so deep his shoulders rose.

It’s now or never, Stiles couldn’t back out now.

The stubble scratched at his lips and Stiles heard the small gasp of surprise from Derek ”Did your wish come true?” he then whispered into Derek’s ear.

I don’t even have the right to say something…being as late as I am with this….but besides that, I truly hope you like this 🙈😳

The cherry boi as a gorgeous Tolkein elf ^^

just in time for halloween~ 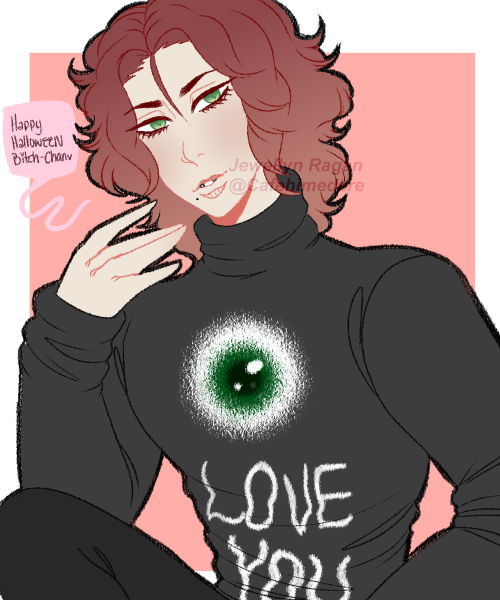 i love them ❤️

Something for Halloween, for Unus Annus, AND for The Gongoozler fandom.

#my artwork, #ethan nestor, #the gongoozler, #digital art, #unus annus, #im going to miss that channel SO MUCH 😭😭😭
5 notes · See All
amatlapalPhoto Sorry that I haven’t been on, but don’t fret, I’m not dead. I just forget to get on her sometimes. But uh let me catch ya up. This beautiful babe is my MHA Villain OC, who we’ll call Medusa as a placeholder name. Her quirks is petrification and crow. Petrification is a touch based quirk that can be used short and long range. The drawback is that if she over exhert herself when her quirk is activate she will have a crumble or “cracking” effect on her physically, as if she’s a withering statue and preventing her from using her quirks. Paralyzing her approximately for 30 minutes.

Oh and for those who wanna know who the two boys are, those handsome fellas belong to the wonderful @angelhunnybunn [Tomoka on the left] and @miron-delta-dog [Muertos on the right]

Alright Im done with the outline time to do the color :>

The Halloween animatronics have such cool designs. I need to draw them more!

I have an exam tomorrow but here’s another one super late. After I write my exam tomorrow I’ll be mass producing a bunch of drawings ans anything I don’t finish in October I’ll just post in November, but enjoy this one for now! 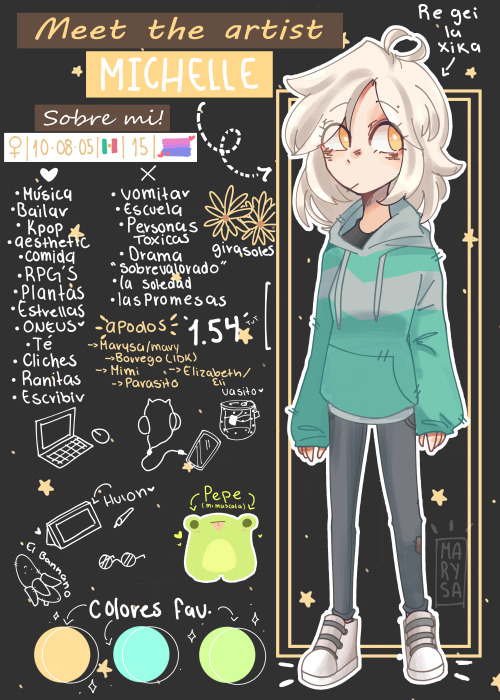 #meet the artist, #my artwork, #digital illustration, #my art style, #meet me
0 notes · See All
shyartbeanText

Yeee. I simply the lemon pattern to make it easier for me. But I like how it came out. I also tried a different way of shading. And it dosen’t look muddy. Which is great.

I’ve always had trouble with shading. But I like the dress. Gives me picnic summer vibes. But I hate summer. But I dont mind picnics.

@selfship-catnip​ I hope you love your vampire girlfriend! :D