Where Do We Go From Here? ||  Lan Xichen & Jin Guangyao/Meng Yao

Wrote a modern AU xiyao set in my Misalignment verse, with both jgy and lx as hot doctors! It’s here: https://archiveofourown.org/works/27857918

summary: Jin Ling learns the many roles the Jin sect leader may play; many of them official, some of them not.

#CQL, #mdzs, #Lan Xichen, #Jin Ling, #Xiling, #Xiyao, #my writing, #y'all I forgot I had a tumblr for like two blissful days lmao, #anyway if you wanna RUIN UR WHOLE DAY I wrote this fic For You
0 notes · See All
justkeeptrekkinLink
Show Chapter | Archive of Our Ownhttps://archiveofourown.org/works/26820595/chapters/68173027

Summary: Meng Yao is born a whore’s son. At ten, he is taken into Koi Tower secretly by his father and trained as an assassin. At sixteen, he is reinstated.

At eighteen, he is betrothed to Zewu-Jun.

When it is arranged that Jin Guangyao and Lan Xichen will marry, the world watches in earnest for what the two young prodigies will achieve. And yet, no one can quite predict how much this alliance will unearth.

Watching Meng Yao wake up in the morning feels like a lovely secret, kept just between the two of them.

Lan Xichen wants to gather him up in his arms and kiss the crook of his neck until Meng Yao laughs. Lan Xichen wants to love him with everything, love him until he sees those dimples in his cheeks. He wants to unroll his love like yards of priceless silk. He holds so much of it in him that it hurts; he is desperate for Meng Yao to take some of this devotion and live in it. Live in it, like a magpie builds a nest. Take it. Please, look at how much I love you and take it.

Seeing him untied and unbound, seeing him knelt in a cave with a cheap pot of tea, seeing him ruminate with heavy-lidded eyes and a tilted head. Meng Yao had described himself as lethal, and Lan Xichen agrees. Living with Meng Yao here, without finery or pleasantries, truly does make him feel like a clumsy intruder who has stumbled upon a wild animal in its natural state. Meng Yao will drape himself across his chest whilst he sleeps, or stroke his hair, or kiss him gently above his jugular. And Lan Xichen isn’t afraid sbecause he knows, knows soul-deep that he is one of the only people in the world that Meng Yao won’t bite. 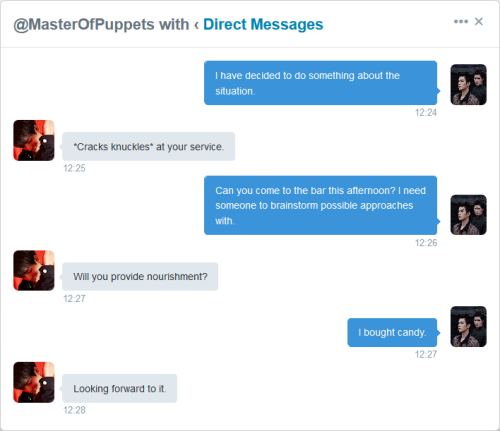 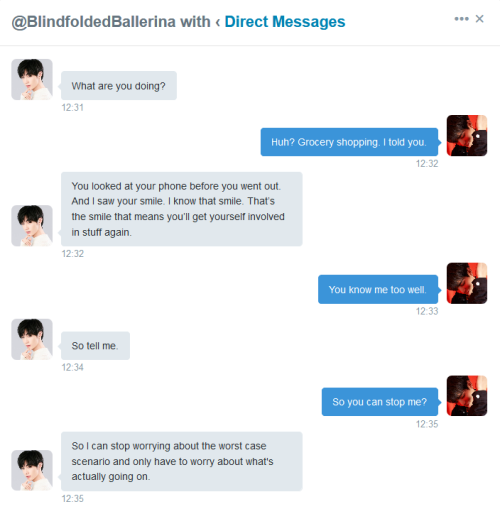 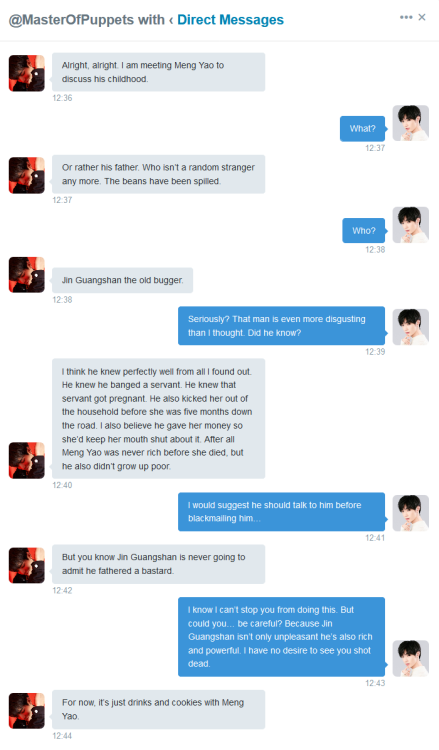 When Madam Jin learns that her husband’s fathered a bastard on a whore in Yunping, she decides Something Must Be Done. She didn’t expect that Something to be including Meng Shi into her little circle of friends and starting a spy network.

She especially didn’t expect her husband’s bastard to become her finest spy master.

SIDENOTE: I suppose I should be glad, considering some of the crapola they’ve posted on other people’s fics, that the most imaginative the xiyao troll can manage is OOC in a divergent timeline fic. Which is to say, not particularly imaginative at all.

from this snippet in @guqin-and-flute‘s 3zun Raise Jingyi universe because it was JUST TOO ADORABLE??? not only little A-Fu staggering about in Xichen’s huge overrobe with the hat covering his eyes, but also BRAID TRAIN (…for a given value of “braid” on A-Fu’s behalf, that’s gonna be a lot of fun for poor Xichen to try and untangle later) and Soft Sleepy JGY 🥺🥺🥺 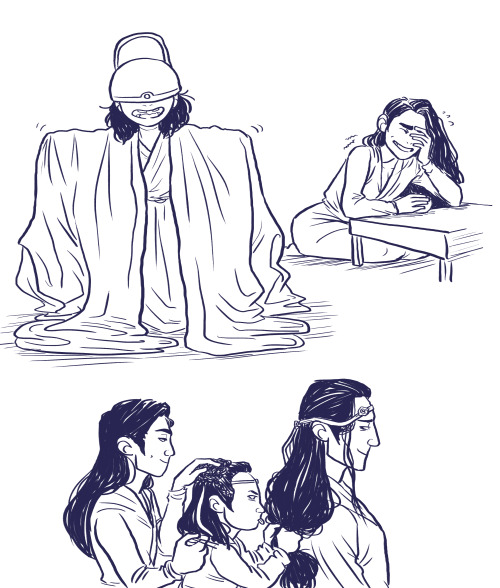 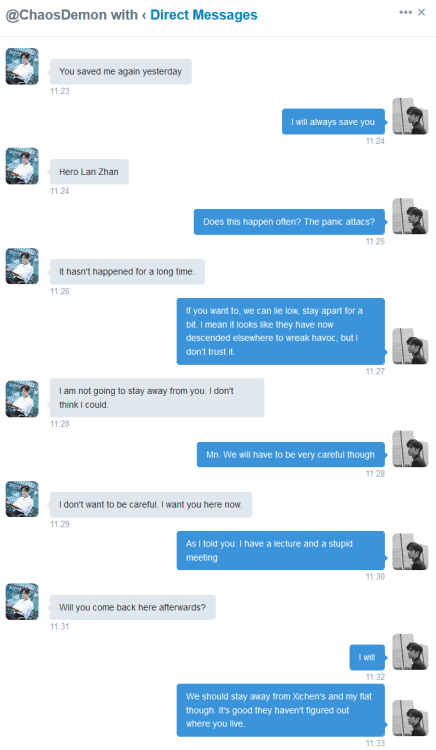 So I am finally (!) forcing myself to read the whole of the MDZS novel, which I haven’t done so far because I dislike the language it’s written in (and I wonder whether it’s the issue of the translation or the original, but that’s a subject for another post) and I stumbled upon this sentence: “For example, a living tree was tainted with the energy of books, cultivated into a conscious being, and causes mischief, it would be a ‘yao’.” And I kind of read the end of this sentence as “it would be A-Yao”, so now I’m stuck with this idea of JGY being a mischief-raising dryad and LX being sent to night-hunt him… and things not ending as planned, of course. Please someone write or I’ll have to do it myself :).

And yes, then takes a look at him and die again and again in his deep black eyes *feeling feelings* 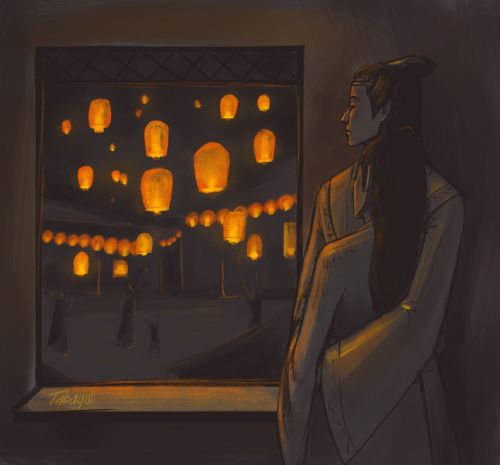 Summary: Nie Huaisang’s love of makeup turns into a business empire that has some interesting consequences.

AKA Nie Huaisang invents Sephora, saves the jiāng hú, and looks damn good doing it. With the help of his best friend and business partner Meng Yao, of course. Business twinks: they’ve got shit to do, people to kiss, and sect leaders to kill.

Who run the world? Twinks!

-It would also have given him a very visceral sense of the danger Jin Guangyao had spent his entire life in, with no golden core and then a weaker one, and I think he would have been very aware of that.

#jin guangyao, #lan xichen, #xiyao, #like--those with full bellies don't know what it is to starve, #now he knows, #and JGY recognizes how traumaric it is too, #he specifically calls it out as wrong he's done to lxc, #*traumatic
26 notes · See All
omgpurplefattieLink
Merely a cat - yakalskovich - 陈情令 | The Untamed (TV) [Archive of Our Own]https://archiveofourown.org/works/27782425

Five times Lan Xichen was in denial about his cat being the reincarnation of Jin Guangyao, and then one time he wasn’t, or, the adventures of Snek the cat in the Cloud Recesses, complete with rules being officially changed!

Lan Xichen is an Agony Aunt who works for the Simple Delights magazine and blog; a perfect job to turn his guilty pleasure for gossip and scandal into a paycheck! However, when he encounters a certain writer-in who is struggling with their relationship, Lan Xichen, the sweetheart of the Agony Aunt world, might get a little more than he bargained for ;) Join in and have some fun! :D

Lan Xichen is nineteen when the young woman finds him at the abandoned shrine.

The young woman’s eyes are even more lovely when they narrow with suspicion. A moment later they are wide and round again and she is on her feet and calling out in a soft voice.

It would be best to flee. He should take no risks.

Her eyes are very lovely, but more importantly, they are kind. Lan Xichen is exhausted and shamed and afraid. He makes his choice. He decides to trust her.

He does not regret it.

‘Cause looking for heaven, found the devil in me

Looking for heaven, for the devil in me

Morning came with a warm presence pressed to Xichen’s front. Before she opened her eyes she knew; she was curled around A-Yao, her arms wrapped around her holding her close. The other woman was so still that she must still be asleep, and Xichen was content to leave it that way. If she didn’t, then they might have to confront the night before sooner, and right now she wanted to savor what was, to say in the cramped room of the tiny inn they’d sheltered from the snow in, and pretend that she wasn’t a married woman. Even if it was only in name, even with her and A-Su’s agreement never to touch each other or even share a bed, it was so strange to share this one with his sister. Not a betrayal, exactly but, strange. Had she seduced A-Yao? Maybe. She was the one who’d spoken first, the one who’d said,

“I love you,” even if A-Yao had kissed her first and taken off Xichen’s dress.

It wasn’t as difficult, physically, as she’d expected, even if neither of them knew exactly what to do. Just being close was so much, enough and more than enough to drive away almost everything else. Almost. There was still a sliver of sadness, of regret in A-Yao’s eyes, even if most of it had gone away with Xichen’s kisses. The letter from Hubei addressed to Jin furen sat discarded somewhere across the room, and after a while, A-Yao’s eyes had no longer flicked toward it nervously. Xichen had only asked once; she didn’t know anyone who lived there, after all. A-Yao had just shrugged.

“I don’t know. I haven’t been there in years, the only person I knew is gone.”

Xichen had needed to banish the thought from her mind to continue. But A-Yao’s perfect face in the low light, even with those sad eyes, made it easy. All she wanted on this earth was to make this woman happy. So she had.

“Stop living in the past”, she’d said as she took the pins from A-Yao’s hair and unraveled the swallow’s tail braid, watching the loose black hair spill over her shoulders. “I’m here, now.”

Now Xichen sighed into A-Yao’s hair as she felt her stir. The woman’s voice was quiet and strangely small when she murmured,

“I will,” Xichen answered thoughtlessly. “A-Yao, I live with you.” She felt a nod.

“You live with me,” she echoed in the oddly empty way she spoke sometimes, almost dreamy, “You won’t leave Jinlintai.”

Xichen froze. In her mind’s eye she saw a woman — a thing that had been a woman once — in white, black hair hanging down in her face, leaning over her and Wangji where they cowered behind Xichen’s bed.

“What?” she asked, her mouth suddenly dry.

Years and years vanished, she was a child again and her dead mother whispered to her, frigid, starved fingers curled around her shoulder.

“Jinlintai,” A-Yao repeated. “That’s what people call the manor, because of the color. Why?”

Xichen swallowed down the mix of horror and confusion that flooded her body, and tried to keep herself from shaking.

#the untamed, #my writing, #rule 63, #Xiyao, #crimson peak au, #in which the con is actually A-Su proposing a beard marriage bc he clocks that Xichen is a huge lesbian with a massive crush on his sister, #oops
12 notes · See All
babycobra365Text 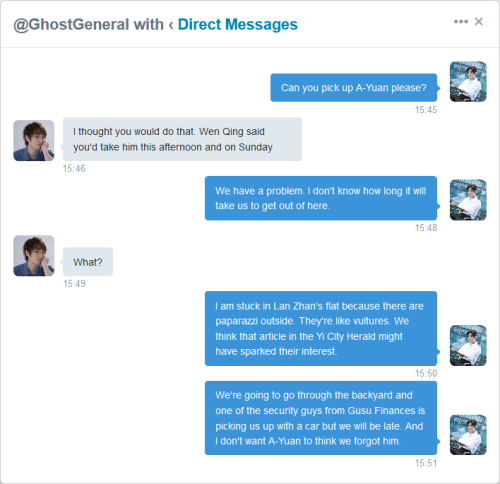 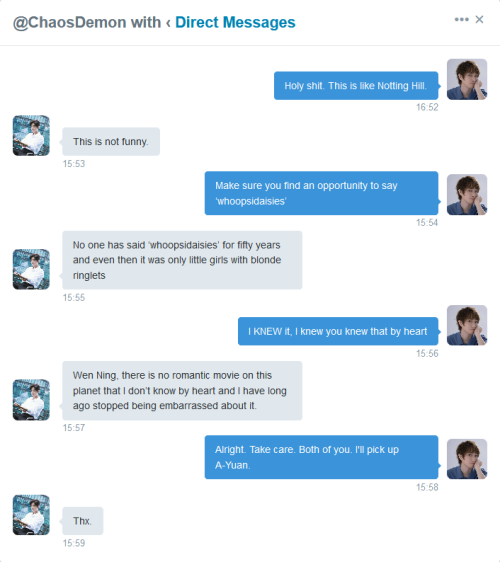 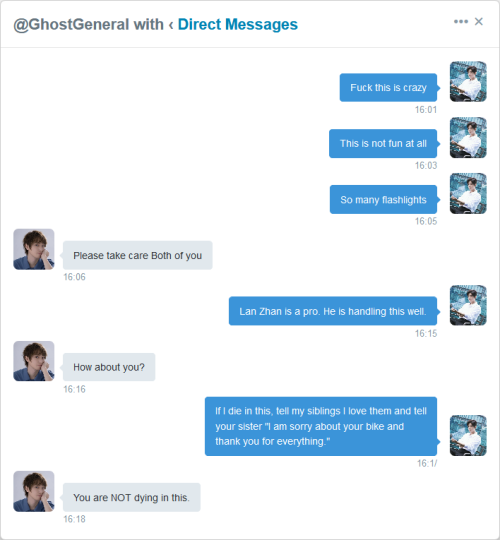 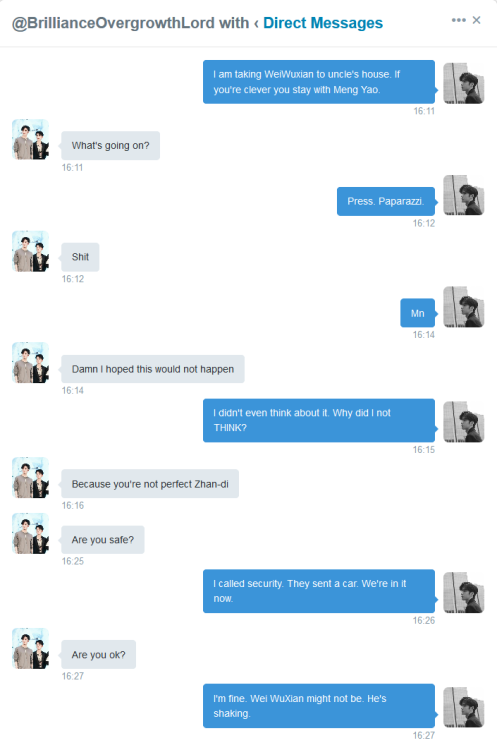 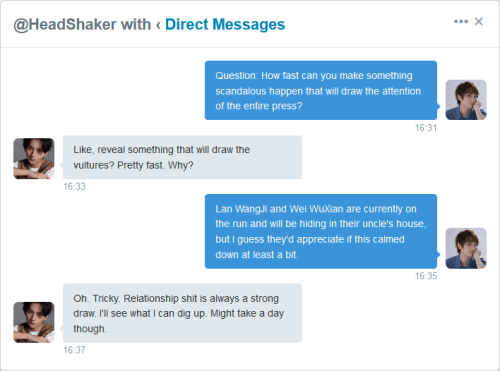