so apparently people didn’t like the Ball Boy Arc? that really surprises me cause it’s one of my fave Hinata arc’s, it’s the one that really made me fall in love with his character. His struggle and stubbornness, and refusal to give up,and he was so so vulnerable in those chapters. And him befriending all this other players? I just love that arc ok?

Shut up people who make fun of rivals vs bragging about someone who only started playing well in high school. (ノ_<。)
This is another stone in the garden of KageHina and the author (-_-) 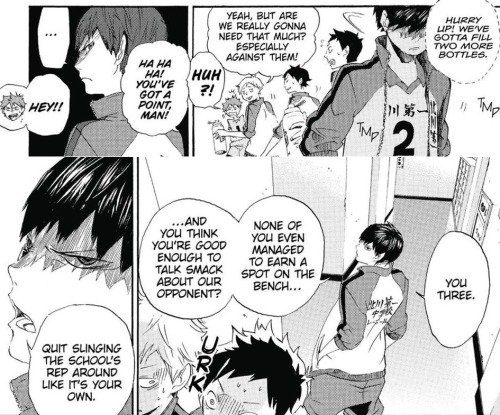 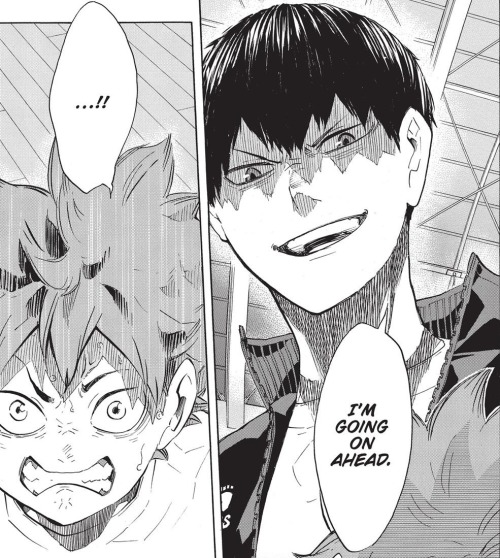 are playing Ark - Minecraft with dinos, and nearly every dino wants to kill you.

Of which after Tsukki and Kenma started playing, Hinata managed to get wrapped up in the game as well. 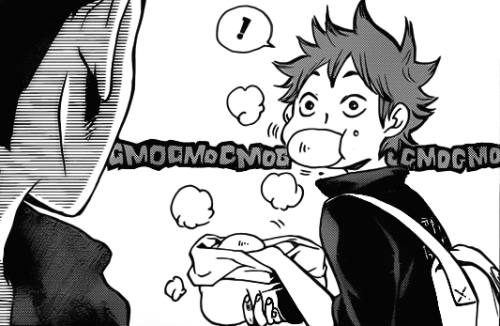 author’s note: instead of doing homework i chose violence. slight nsfw at the end

hinata: talks too much during movies!! you have to keep replaying the same scene bc u keep missing it

kageyama: sweetie if you’re his first few partners i’m SO sorry.. this man does not believe in dating he only does bi-weekly check-ins

tanaka: he thinks everyone wants him.. she said hello because she works there 😭😭

nishinoya: when i tell u he follows so many IG models 💀

suga: KING. the only thing i could complain about is just how much he has his shit together it’s not even funny…

tsukki: when y’all go shopping he keeps saying u have something like that at home. PLEASE let me have some fun

yamaguchi: why is his car so messy? ur just tryna get in the passenger seat and he’s moving his gym bag, his hoodie, his notebooks, his pencils, a blender, and some empty water bottles. forget it lol i’ll just sit in the back

haikyuu middle blockers reacting to you cutting your hair short

a/n: there are A LOt of errors in here… but i feel like that makes it seem more realistic 💀 i’m just making excuses for myself here lol but enjoy <3

*ignore the PM on the read receipt 🥴

*typo: “what are you so loud for” (it’s only supposed to be in there once… my bad)

Hinata with the cool light sneakers on a bike. Also thought to include my reference since I had it available. Partially also inspired by the GO music video by NCT DREAM. 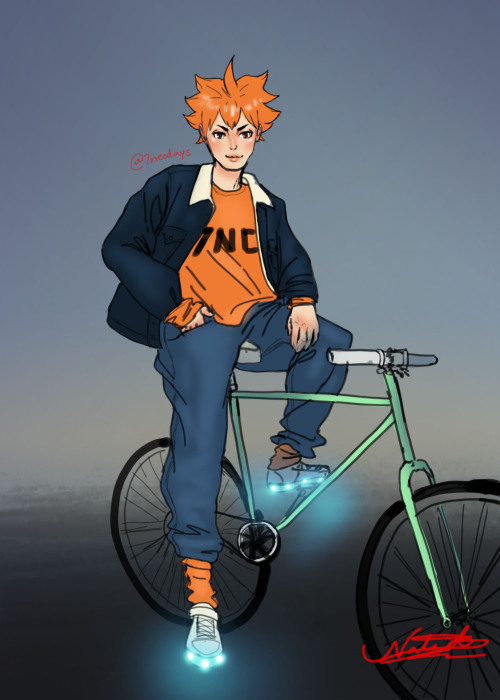 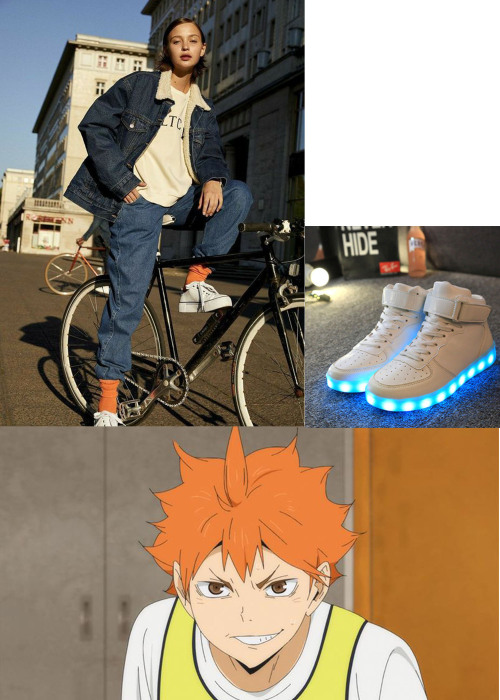 a spark, that was there is to it

a mere spark that ignited something deep within him

a mere flash and he’s mesmerised, it was something captivating

people said that inspiration always comes in an unexpected manners

but when he rode his bike home, head full of grocery list, founding a lifetime goals is something that is not on his mind

a rocky path, long and winding, enough to make you back down the moment you glance at it

small step, small heavy step is what he makes

every little twist and turn, tackling them one by one

nobody by his side, the blurry scenes of what could’ve been is the only things that kept him going

like the sun, he shone brightly, pulling you in with his own gravitational force

warming everyone that come closer, making you wander what did you do before you know him

he is everything that I wish I could’ve been

and so I write this note just for you, my muse

the one person that makes me realised, the only one that matter in your life is you, just you.

here’s to you, me and us 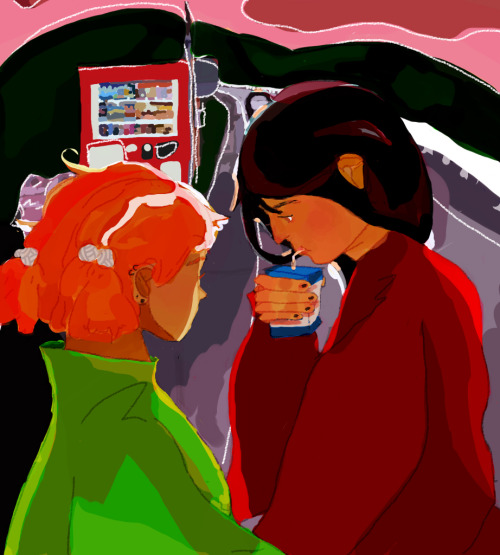 #kagehina, #hq!!, #hinata, #kageyama, #my art, #omg they glow pink in the night y'all......., #anyway i quickly drew this extremely self indulgent fem kagehina bc i had two exams today n i cant take this any longer, #they're living my middleschool wlw jock dream!!!!!! I wanted what they have so badly when i was 12 dsfjafa, #sorry this sucks im literally unwell :-), #also yes hinata was meant to b wearing a froggy jacket <3, #the colors r prettier on my laptop i am literally sick to my stomach
4 notes · See All
hq-panelsText

(it’s ok if you are, everyone is sad sometimes)

Hinata is the classic run into a glass door type of guy but it’s also the fact that he’s done it 5 times, at least.

Kageyama the type of guy to drink spoiled milk straight from the carton, it’s not like he could have known I mean…suga even put a note on it that said DO NOT DRINK. But hey, your boy can’t read.

Nishinoya thought it would work if he jumped off the roof holding an umbrella. Even worse is, it wasn’t even windy that day and the only place he went to was the hospital.

Tanaka thought it would be sick to ride his bike down the stairs IN HIS HOUSE. He and Noya are best friends for a reason; Hospital buddies.

Asahi has gotten his hair stuck in the blow dryer and instead of turning it off, he just ran away and ripped the plug from the wall. Well, at least he didn’t use it in the bathtub.

Sugawara got kicked out of the zoo once for cussing out a giraffe. Idk the details but I’m sure it was hilarious.

Daichi wears his jersey backwards about once a week, no one tells him and they don’t know how he doesn’t notice. Someone help this man before he starts putting his pants on backwards as well.

Kiyoko has eaten lip gloss thinking it was edible, she only had a little bit before she gagged and ran to the restroom.

Yachi forgot her notebook in class and instead of asking for paper, she wrote notes on her legs and arms. The teacher thought she was using this to cheat and gave her an F. I’m so sorry, Yachi.

Tsukishima thought it would be funny to switch the salt and sugar labels to confuse his teammates, this would have worked if he didn’t have the memory of a goldfish and use the “sugar” container for his oatmeal. Salty just like you Tsukki.

Yamaguchi ran out in the snow wearing shorts and sandals, he thought he was fine until he passed out in the front lawn and his mom had to go get him. Poor yams.

Takeda the type of guy to pull on a push door. Ukai still makes fun of him.

Ukai has started a fire in his car before because he lit a cigarette and tried putting it out on the floor of his vehicle. He also had no car insurance. A shame really…

Ennoshita driven away with the gas pump still in his gas tank, he drove all around town and didn’t notice until the NEXT DAY.

Kinoshita wears swim goggles to bed because he thinks he’ll be able to dream about being underwater this way. It’s been 3 weeks.

#haikyū!!, #haikyuu, #haikyuu funny, #karasuno headcanons, #this is just for fun, #i love my idiots, #hinata
2 notes · See All
nienk-desuText

Everyone is so intense:

And then we have Hinata who’s just being a precious ray of sunshine: