Summary: After the events of Suicide Squad, the princess of the crime empire is born. Raising their daughter to rule Gotham proves to be a killer game.
Chapter summary: The Joker honors the good old times.
Characters: The Joker, Harley, Lucy/Jaylie Quinn, June Moone.
AO3
________________

His psychiatrist was blonde. With doe eyes, and a plastered smile. Ambitious. He did appreciate them sending in this little treat, but it wasn’t enough.

The Joker looked for something else to see but her boring face. Harley came to him at once, flickering around him, but never really in the way he wanted.

Ah, there she was. Naked, covered in blood, cradling a baby in her arms. Throwing her head back, sticky blonde locks falling around her shoulders, wide lips inviting him. It wasn’t the mental picture he had been looking for, but that was how she wanted to present herself.

There had been something purely animalistic about her around the time of childbirth. Ready to tear out throats, and he had made her like that. Watching her become so feral was enjoyable, always out for blood, and now the child is teething so shhhh-

A flicker later and Harleen was sitting next to him by the table in the empty, tiled room, wearing her white doctor’s coat and golden hair in a ponytail, looking accusingly at his assigned shrink. He knew why.

“Ya wanna be in the center of attention so bad, huh,” he chuckled at her.

Harleen got a slight fluster on her face. He leaned into her with a grin, tilted her face upwards, and saw her cheeks glow. Atta girl.

He enjoyed seeing her like this, and she was here, viciously beautiful and completely his.

“I’m here to finish your evaluation,” the psychiatrist said, looking at the notes in front of her as she tried to regain his attention. She sounded straight down-to-business, composed. They all knew about Harleen Quinzel – it was national gossip by now. He knew exactly what she thought. It was apparent in her wary eyes, but she wasn’t just scared. She was curious. Over-confident. Out of all the old-timey shrinks Joker had met in the last months, she had been the one insisting to treat him.

Oh, would he play with his food.

“Ever met Dr. Quinzel?” Joker nodded at her seat. “Right there I spread her legs and made her scream.” He smiled, reminiscing. Even after all these years, the memory of Harleen gasping affected him.

As long as Lucy Quinn doesn’t start spontaneously dating Damian or something, Bruce can handle any of the parents

#tim drake, #joker junior, #lucy quinzel, #lucy quinn, #the joker, #batman beyond, #batman beyond return of the joker, #injustice gods among us, #joker fanart, #dc, #dc fanart, #dc comics fanart, #fanartwork, #arkham asylum, #lovecomicbooks, #adobe fresco
59 notes · See All
quinnclanText
#batfamily, #red hood, #lucy quinn, #batman, #dc universe, #harley quinn, #joker, #red robin, #nightwing, #jokerjr
7 notes · See All
poetzproblemAnswer
hey poetz, i LOVED your last db installment, it always makes me happy when you post anything. i dont know if you've talked about this before but what are Quinn's books about? and how does she prefer to write? Does she like to get out of the apartment and write in cafes or lock herself away in an office and write loads at once? And does she share her unedited work with Rachel or does she only let her read it when it's closer to being finished?

I’ve never gone into detail on Quinn’s books in the actual canon of the DB universe. The official description is:

Her first two novels had been grounded in realism, but colored with touches of fantasy that had given them just a little something extra to keep the reader engaged.

But I have talked about them on the blog to some degree. I’m imagining a fantasy series in which the protagonist from the first book (based on who Lucy used to be) wanders into a strange ‘curiosity shop’ owned by a mysterious woman and ends up buying a wishing stone. She doesn’t really believe making a wish on that stone will actually do anything, but it does. The stone and the shop both disappear, and she’s stuck living with the fallout of her wish and trying to find a way to undo it. The book is basically a ‘be careful what you wish for story.’

That protagonist will then reappear in the following books as she chases after the shop and antagonist in the hope of getting her old life back, and she gets sucked deeper into these mystical happenings that are seeping into this world thanks to the wishing stone and the foolish wishes that other people have made.

Quinn basically writes whenever she has the inspiration. Before Calliope, Rachel’s show schedule was actually great for her because she had hours alone in the apartment at night when she could write wherever and however she wanted–sprawled out on the couch, at her desk, taking her laptop to bed. She did tend to write in pretty long sessions when she had the time.

After Calliope, it’s harder to find quiet alone time for those first several years, so she has to schedule in writing sessions when Calliope is napping or lock herself in her office when Rachel is home to watch their daughter. Once the kids are in school , though, she’s less tied into scheduled writing time and can be a little more spontaneous about picking up her laptop whenever the inspiration hits.

Quinn tends to share her writing with Rachel in the earlier stages. She won’t ever show her the first draft of anything–she tends to rewrite things until she’s happy with them–but Rachel usually does get to read things before they’re officially edited.

Rachel loves that she gets to read Quinn’s books first, and she’s actually surprisingly good at keeping those spoilers under wraps.

“She remembered who she was and changed the game.” 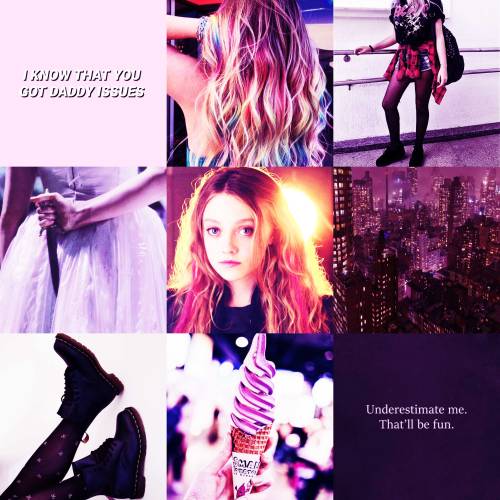 Someone got into a fight at school but hey at least she won.

Here is my drawing about Lucy Quinzel in my fanfiction, it took me a while to post it for a few reasons. Sorry if the second image is difficult to see, my cell phone downloaded and I decided to use the camera on my notebook.

Lucy in my fanfiction

Lucy Harleen Quinzel at 14, was transferred to Gotham Academy after moving against her will from Blueraven to Gotham city, Gotham Academy was seen as Lucy’s aunt’s last hope for the young woman’s behavior.

Don’t misunderstand, Lucy is an educated girl (if you don’t find her on a bad day, or, tease her) and has no worrying psychiatric condition (unlike her parents), but the young woman has warm blood and a magnet for problems.

Batman (But it’s a secret)

An American werewolf in London

Any human being dressed up as a clown

Green (But she wears it in her vigilante uniform) 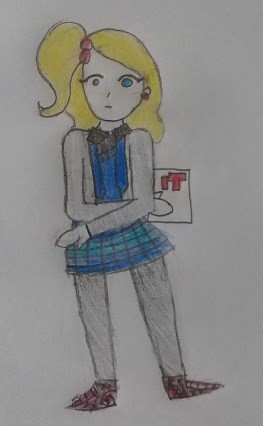 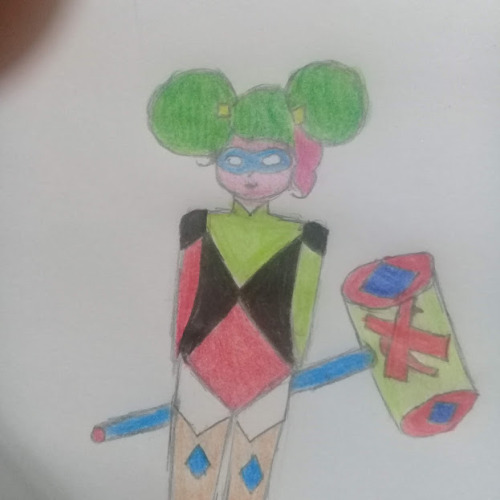 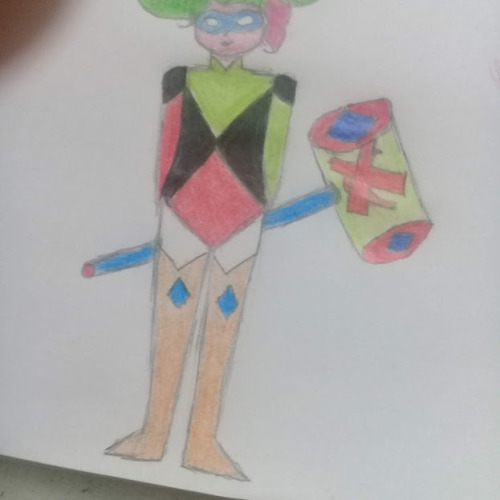 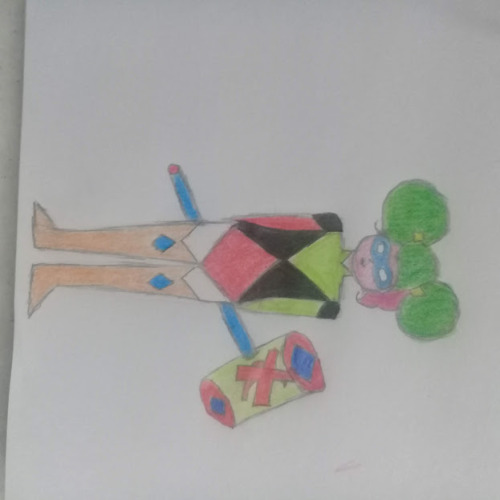 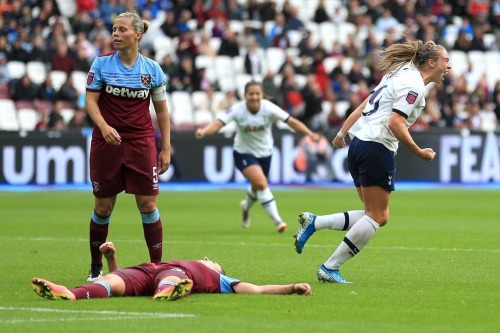 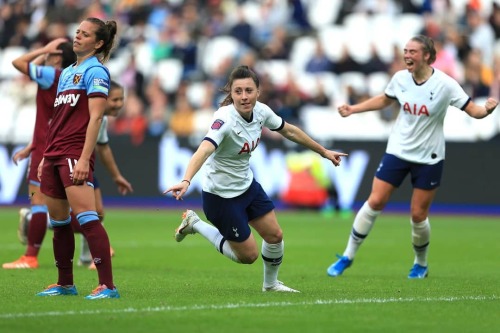 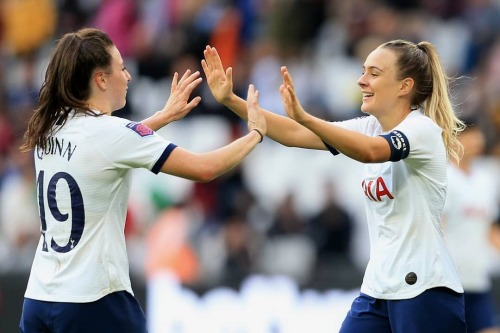 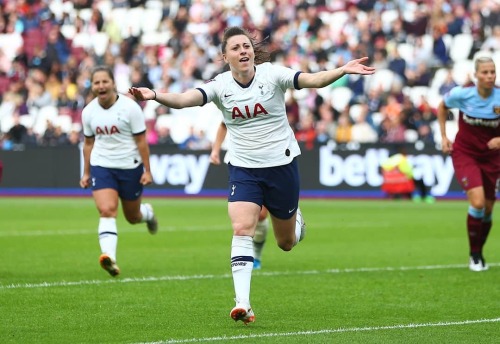 Birmingham reunion has got me soft 🥺 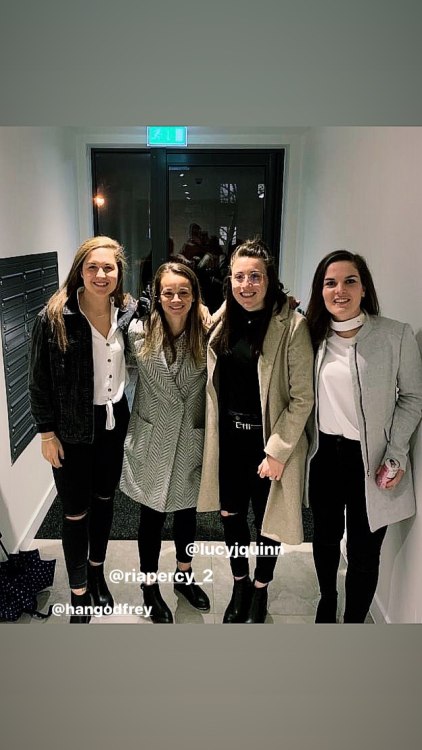 #hannah godfrey, #ria percival, #lucy quinn, #siri worm, #tottenham hotspur wfc
6 notes · See All
poetzproblemAnswer
Did Rachel ever get the chance to be a part of Quinn's books-turned-to-movies-or-maybe-mini-series? How did that conversation go if Rachel did get an offer to act for it?

Rachel didn’t have a role in the films but she did contribute to the soundtrack for the second one. She wasn’t actually offered a part in the first one because it started filming prior to her burst of success, but the possibility of a cameo may have come up for one of the later sequels. I think she would have declined that because it felt like stunt casting and she wanted the universe that her wife painstakingly created to stand on its own merit.

Mar'i, Lucy, and Carrie all compete in the same gymnastics meets and tournaments since they all have the same two coaches; Dick Grayson and Harleen Quinzel. Mar'i normally wins 1st place and Lucy normally gets 2nd and 3rd in their age group. Carrie is in a different age group and tends to win 1st, 2nd, and 3rd.

Helena Wayne, Lucy Quinn, Lian Harper, Irey West, and Mar'i Grayson are all best friends. They are dubbed ‘The Troublemakers’. 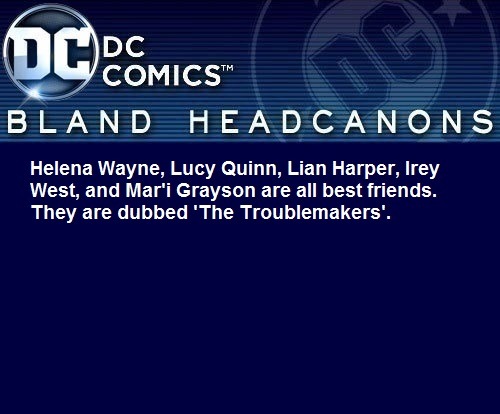 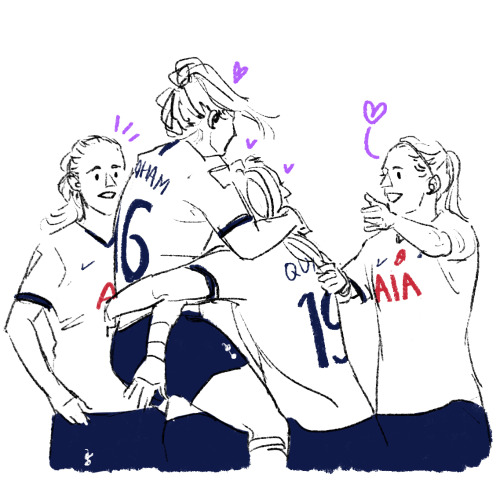