Billy: the fuck is wrong with you people.

Later on the watch tower

Flash: sometimes when running, my leg elbows get sore

Batman having flash backs to Red Robin and Red Hood. Marvel not dealing with this shit again

Batman and Marvel: No!

A/N: blame dvsn for making the song exist, not me, but feel free to vent in the comments too.

The mornings always started the same.

He would wake up with the phantom touch of your fingers in his hair, and the lightest feeling of lips being pressed against his forehead.

Tim, Raven and Miguel look so cool in the last panel. 😗

“We could even get that tooth fixed, mate… Believe me, S.T.A.R. Labs has one hell of a dental plan.”

“Red Robin. A.K.A. Tim Drake. It doesn’t matter which name you go by. Either way and by either name… you’re in a world of trouble.”

“You’ll find that I am less vulnerable to technological tricks than the others. Much less. I deal in other realms, other levels of existence. I could summon any number of demons or demigods to help me deal with you. But instead… I think I will call my friends.”

The friends instead of demons is like a complimment… right? 😆

“I told you a chimp’d be strong enough to get you down here. You guys aren’t zoologist, are you?”

“I’m explaining the facts of life to this guy. Like how in this world, some people, people like us, we wear masks. And how, underneath our masks, we might be good or evil, black or white, man or woman… straight or gay. But one thing you can count on, the one thing you can always be sure of, is underneath our masks… we are very, very dangerous. And he’s listening to me. Aren’t you?”

He has a My little pony’s wall scroll in the aparment. ☺

A/N: AGAIN THIS IS REALLY DARK PLEASE READ AT YOUR OWN DISCRESSION

As Rory sat in the chair, she could feel how weak she was getting. It had been weeks and she was still playing Joker’s prisoner, every day he would come in a try to piss her off to the point where she would kill him but every day it didn’t work. Since she worked out the fact that it was Slade who put him up to this, she knew what he wanted. Slade wanted her to kill again, and spiral further before he finally killed her himself.

When it didn’t work, the Joker took to his favorite part; torturing her. Of course, the wound on her side was still injured and he used it to his advantage. The Joker figured out pretty early on just how high her pain tolerance was, and what would make her scream but not what made her angry. 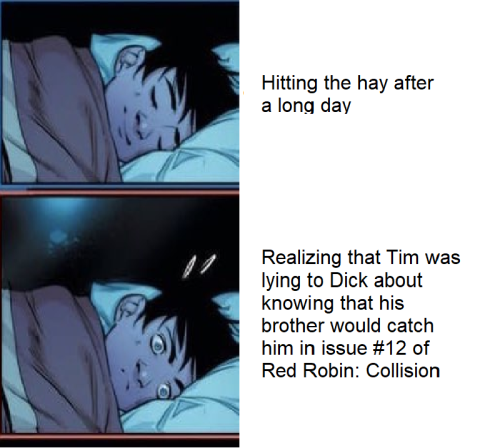 I am not dead! Just haven’t been using Tumblr to post work lately. Moving forward, I will probably just be putting full illustrations up on the blog which means updates will be pretty slow. In any case, I wanted to show this piece I did for @bat-famzine! I’m so so late revealing it here, but there ya go. The zine itself came out so beautifully, I’m honored I got to be a part of it :) 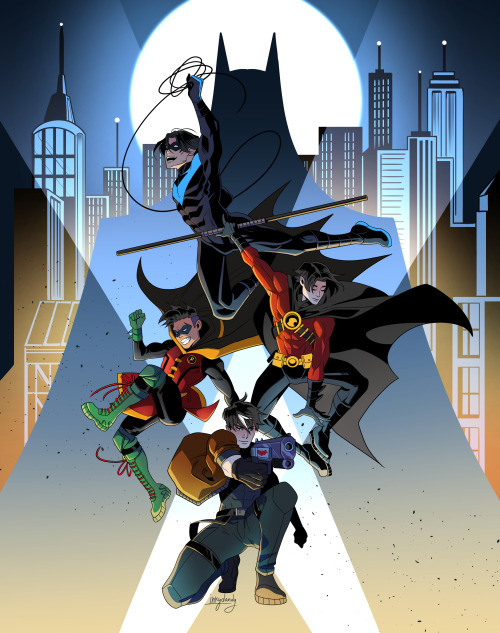 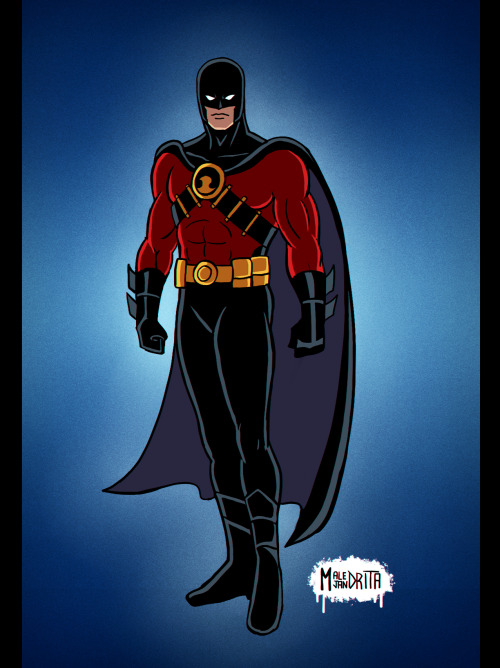 Tim withdrew, scoffing. Then wincing and cupping his broken nose through the tissues Barbara had lent him.

“You know the rules we laid out as well as I do!” Steph gesticulated violently with the gun. Some of her fair hair had escaped her helmet – and was splattered with pink. “And you’re cheating.”

“Hey,” he protested. But despite himself he stifled a laugh; her eyes sparked beneath the helmet.

“Tim, like the rules of love, the rules of paintball are simple: you. Cannot. Have both Babs and Cass on the same team! That’s just straight out unfair for the rest of the human population, let alone the opposing team.”

Tim let go of his nose to glance back out at the rest of the paintball field. Poor Jason; he appeared to be getting both barrels to the chest right now. Even for such a big guy, such an onslaught of cheerful yellow and green had to be a lot.

“Eh, Jason deserved to be taken down a peg.”

“He usually does, that’s not the point.” She wagged a finger at him with exaggerated drama, making him stifle more laughter. “He’s still my teammate. I fought tooth and nail to be a part of this family, and that includes being loyal to them during paintball matches.”

Paintball guns lowering, Tim and Steph both sat down. They glanced over to watch Damian ruthlessly taking aim at Dick, at Duke running in to save him. At Cass darting away in triumph.

When they took aim again, he glanced down the barrel of the gun through the tissues of his nose; all he could see was color. All he could hear was Stephanie’s laughter, joyful once more.

So are we gonna get Timkon confirmed in Spanish too or…

#timkon, #tim drake, #conner kent, #kon el, #red robin, #superboy, #im waaaaitiiiing, #supernatural, #can i add that tag
12 notes · See All
crimson--luxChat
Jaytim as Dads when their kid comes home crying
Tim: Oh no. Oh baby, what’s wrong?
Jason: Do you remember what happened?
Tim: It’s okay if you take your time.
Jason: Do you remember who was there?
Tim: Just tell us when you’re ready.
Jason: Here, why don’t you write down their names-
Tim: Jason.
Jason:
Jason: what
#lmfao what, #i pity the poor soul who shall face the Drake-Todd's combined wrath, #jaytim, #also please check out my blog, #I make jaytim art, #I think they're good, #sometimes, #Jason is the definition of take names kick ass, #jason todd, #tim drake, #red hood, #red robin, #dads
16 notes · See All
catboymilesmoralesPhoto

im too lazy to color so imma just post my Tim Drake redesign, I’m calling him the shrike bc red robin and drake are both the stupidest names ive ever heard 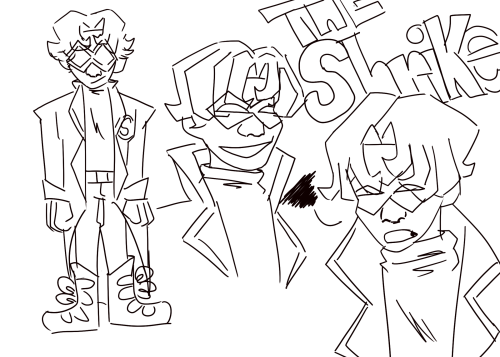 It’s never that simple Damian.
-
Comic Summary- Dick, Jason, and Tim are magically changed into their younger selves.  How will Damian and the rest of the Bat family deal with this twist in their reality?
-
Updates on Wednesdays and a preview of each update on Monday for Patreon supporters.
-
Please do not repost
I’m on twitter (Cassarilla_), instagram (CassarillaDraws), deviantart (CassarillaDraws), Patreon (Cassarilla) and ko-fi (Cassarilla) 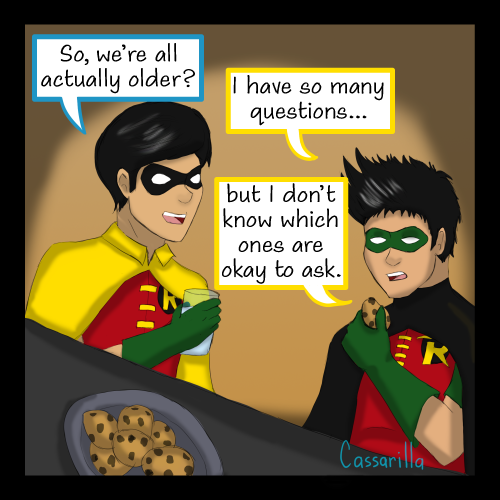 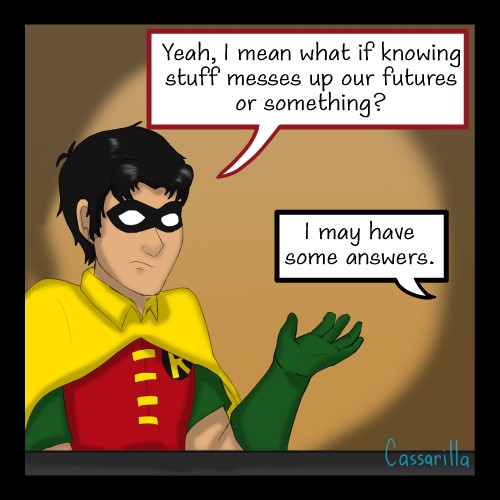 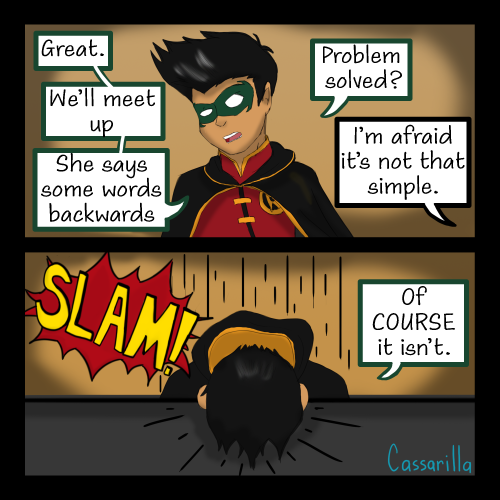