I honestly don’t have the braincells to elaborate properly, but Disney as a company hates and never knows how to handle Frozen and that’s super heartbreaking.

They see it as nothing but their most profitable title and in turn, every decision about that property always goes back to “never take risks too big because remember Elsa is the kids’ Superman at this point”.

Frozen II could’ve been great, but they refused to let Elsa face the consequences of dealing with her problems alone (by remaining frozen and unable to save the castle), and they also refused to let anything happen to Arendelle’s castle because they’re building it for the Disney parks.

Arendelle in KH3 could’ve been great, but instead it became a boring repetitive and senseless stage with no cohesive narrative attached to it, all because the prospect of Elsa being used for evil or doubting herself enough to become a “villain” went against Disney’s model of perfection they try to keep her on.

It just sucks how Frozen gets to have such an insane amount of creative people in its fandom, only for the actual team behind it being held back by execs who just make the property worse and not letting it reach its actual potential.

#frozen, #frozen 2, #i truly hate how disney handles frozen, #theyre the reason as to why elsa gets so much shit
0 notes · See All
incorrect-frozen-quotesChat
Anna: But please, be careful.
Elsa: You know me.
Anna: Yeah, exactly, that’s what I’m worried about.
#frozen, #anna, #elsa, #snow sisters, #frozen 2, #incorrect frozen quotes, #submission, #iamdelta-s, #thanks for submitting!, #source: supergirl
45 notes · See All
super-mam-te-mocText

They wear each other’s clothes occasionally

Frozen 1 and 2 bedding I got yesterday for my girl.

You can see why I am not a fan of the f2 designs.

Omg man you’ve been here on and off huh but yeah!! The original endings of Frozen 2 was to have Elsa die and then stay dead but in the last minute (a year before the release of the movie if I recall correctly) they were told to change it cause… that’s fucking traumatizing?? And it’s probably the main reason elsa gets sent to live in the forest because it was so last minute they couldn’t really fix everything (and also they wanted to keep Anna as queen so they needed a reason to get rid of Elsa since death was now out of the option)

I’m sure there’s more definitive proof around but since idk where to look imma post this ask to see if anyone else has the posts that talk about it. Also anyone else feel free to fact check me or even argue I guess im just livin my life here yaknow have at it

Inspired by the original for Frozen (I)

To keep my sanity, I limited myself to 1 screencap for every 30 seconds of the movie but honestly, asking me to chose only 200 screencaps to capture my favourite movie of all time - impossible!! Hardest was Show Yourself because gorgeous Elsa is all over it! I kept wanting to take more screencaps…

“There can only be one queen of Arendelle…” 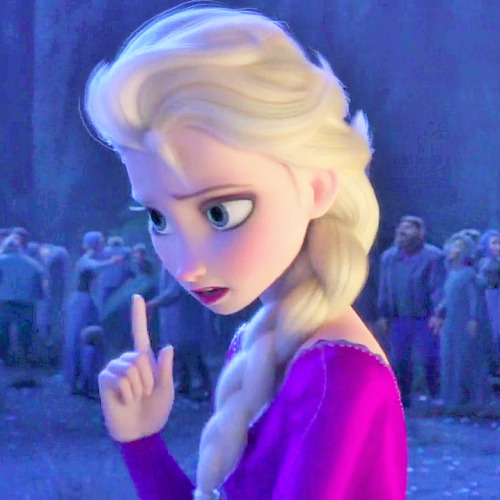 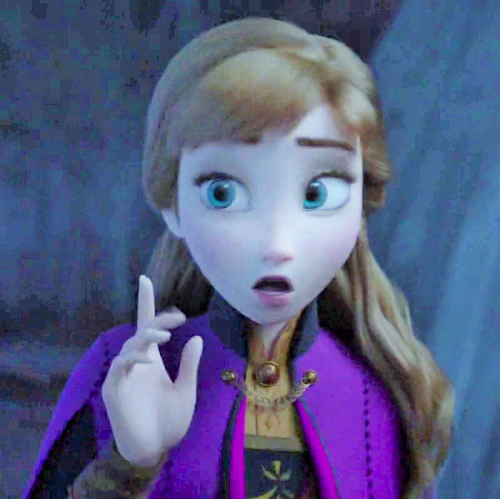 I loved the “Show Yourself” scene in Frozen 2

Thanks @hafanforever for allowing me to use her original gif!

literally JUST seeing this as i have been totally inactive here, but I do owe you an answer so here you go!

I am a Hansanna shipper at my core. I recognize that Hans is “bad” and Kristoff is “good” and this is a Disney franchise so Kristoff being the true romantic interest makes sense, but I’ve still always preferred Hansanna, especially after being introduced to the amazing fics on this site!

I don’t like…. hate Kristanna. they just don’t do it for me. I don’t think they’re as perfect of a relationship as the producers try to push them to be. communication is clearly an issue in the second movie, to a point where you wonder how the pair was even able to talk to each other at all without Kristoff’s awkwardness and Anna’s self doubt for 3+ years. I feel like we’ve barely gotten ANY content regarding their relationship, so it’s hard for me to ship it.

apart, Anna is my favorite character and I think Kristoff is cool. he was funny in the first movie and Jonathan Groff is amazing. but since he begins his romantic relationship with Anna? nope. especially in F2. in F2 I feel like their positive traits are negated when they’re together and they just aren’t at their best.

I think what contributes even more to my dislike of this ship is the volatility some Kristanna shippers have towards Hansanna shippers. in the past some mean things have been said (I think most of it was resolved?) and a lot of Kristanna fics paint Hans as a really horrible abusive person which just isn’t my cup of tea. so yeah. I don’t like Kristanna, I don’t like the way their relationship progressed, I find them annoying together, and past hostilities have kind of turned me away from wanting to explore that ship. I just think Anna would be better with Hans. one day I will compose a whole essay on this but today is not that day.

#frozen, #anna, #hans, #frozen 2, #kristoff, #these are just my thoughts DO NOT come after me
4 notes · See All
serenejasmineText

the ending of moana and frozen 2 is something I think about a lot. after an entire movie feeling like something was missing from their lives and following callings that lead them to their destinies, moana and elsa were able to find the missing piece and finally live the way their souls always knew they should. imagine that feeling

Did a location shoot for her the other night. Took my tripod and remote and went out to one of my fav spots on the lake.

I really love how the whole cosplay looks together. Happy with my decision to go with the cheaper option, and still got a great cosplay.

A request for @l-egionaire - Elsa reading to Anna. I can imagine this happening post charades game, a relaxing evening together 😊. Enjoy!

So thanks to another fandom for letting me see how “Show Yourself” is a deeper song, I have been obsessed with it.

What upsets me is that I didn’t see it in the first place.

If they only fleshed out Elsa and Anna’s mother’s character a little more, maybe it would be more emotionally powerful. Then again, the film is very vague, like how all over the place the first film was.

The AMV that I saw “Show Yourself” to was Superman (Christoper Reeve).

A little more vague and all that, but through Smallville, I could remember Tom Welling’s version of how much he felt like he couldn’t fit in back in high school since he was so different.

The Superman mythology is even more vague, but at least we know the mythology for years and years.

Frozen 2 went “oh, here is what happened, but we’re not going to explain it”. They did it to the parents’ back story. They did it for so many other things, that the film was kind of a big “what just happened?”.

So, yeah, don’t know who’s writing the films, and love the song now, but Disney could do a lot better.

I have wanted for so long to start uploading song covers to YouTube. My ultimate YouTube dream is to get to the point where I can do the sort of things Traci Hines does—full-scale music videos set to my own vocal covers. And for so long, I have put off starting. Because I would look at people like her and feel like my efforts weren’t “good” or “polished” enough. Even though she (and many others) started exactly like this. Just singing into a webcam in her bedroom. And the people whose YouTube music work I admire? They have studios to record in, and producers to help them polish their audios, and editors and so much more experience, and other advantages that a beginner doesn’t have. I wasn’t being fair to myself when I compared my starting point to their current product.

I’ll never get to the place I want to be if I don’t start. So, yes, there are flaws in this performance. There are things I could have done differently, the audio quality could be improved, etc.

But I finally started. I finally put myself out there. And I hope that I’ll only improve from here.

No because otherwise they would have given him a role in the end…while they gave him to Mathias.

K stays there….doing nothing. For 1 hour, cause it’s all he can do, he can’t even stay dressed like that more for 1h.

Think about the end of the movie: Elsa and Anna had true love, a bond as sisters, and now they even have this magical - universal - poetic bond, as the bridge.

They fucked up with the end, I always say it, but not to “elevate” another relationship since even the end he’s put aside, while the last connection is still between Elsa and Anna.

I really think in their mind they didn’t break the bond, they made it stronger because they are still together even if apart. We didn’t buy it, of course, but since this was their intention we can’t say they did it to elevate another relationship.

Oh, hey. Look what I doodled for @goofymuses a few weeks back and forgot to post.

Crack ships are the best. Squeenix hair is the worst. This will all make sense when I am older~

…“I wanna glide down, over Mulholland

Wanna write her name in the sky

I wanna free fall out into nothin’

Oh, I’m gonna leave this, this world for a while”…