someone on the miritama server started sharing tamaki in maid outfits so i drew one and trying to get everyone to do it now haha. so if you like tamaki, draw him or draw mirio in a maid outfit.

join us at the server if you want lmao: 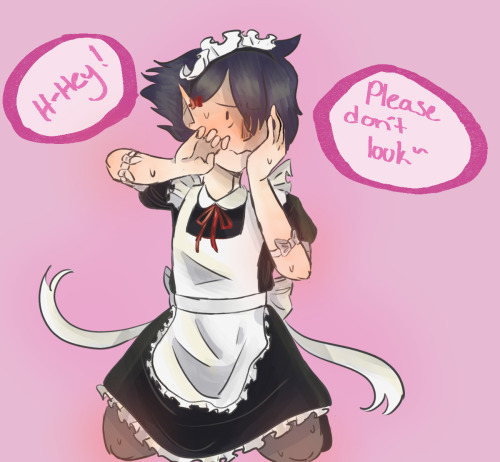 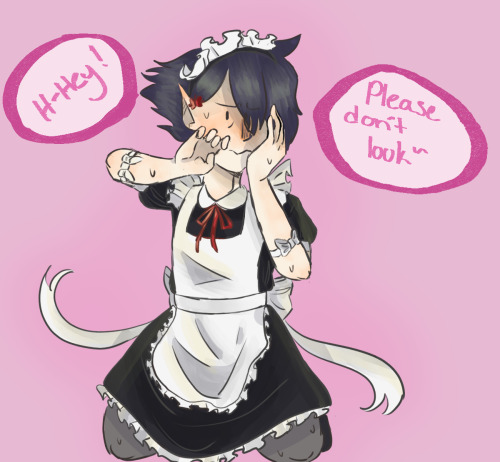 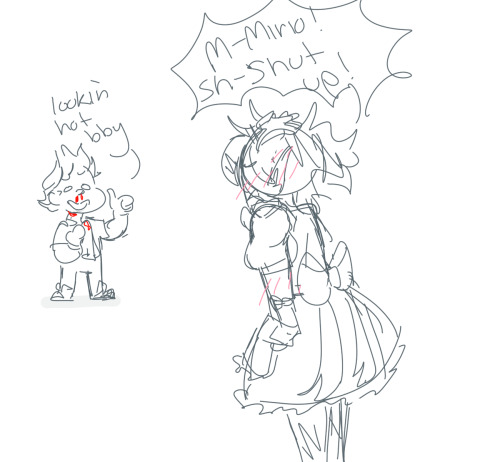 Gravity of the Sun
by Vader Lass

After battling with a member of the Kouman organization, Tamaki Amajiki is left injured and wakes up in the hospital. The worry that Mirio Togata, his best friend and fellow prohero, shows for him paves the way for bigger feelings to show themselves! Some OCs, LGBT pairings, and M rating will be for sexual situations and villain related violence

Today i present to you- yET another miritama fic reccomendation called “Lead Me Back to You” (from chapter 5, 3 & another 5!)

THIS FIC IS A VILLAIN TAMAKI & HERO MIRIO AU AND IT’S JUST- SO SOFTT- if you like my reccomendation on kayla’s Ghost fic a whole back, THIS IS A FIC FOR YOUUUU UWU #minors watch out for sum smut tho :’) 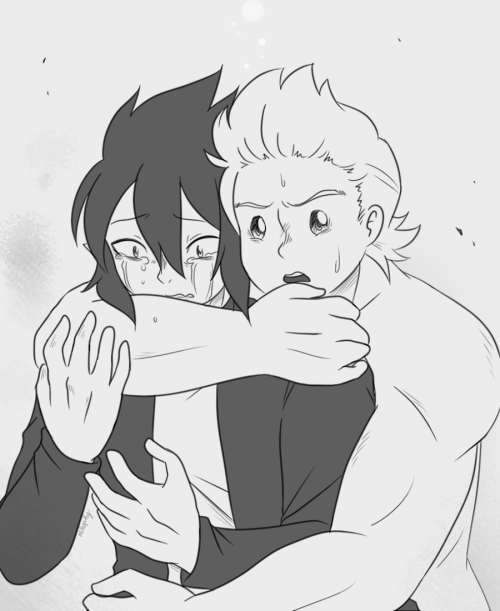 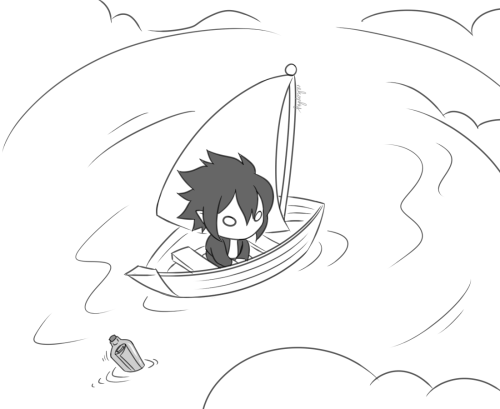 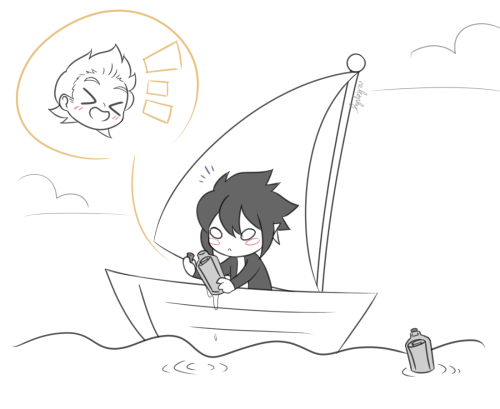 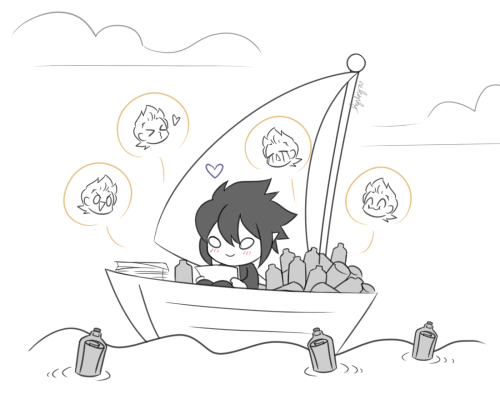 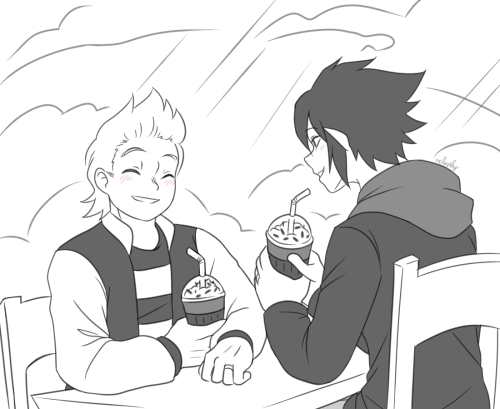 Kaminari: Hello and welcome to our weekly “My Gay Ass Is Pining Way Too Hard” therapy sessions. We are going to start with a reintroduction for our newer members and then continue on by recapping this weeks gayest incidents.

Bakugou: Hello, my name is Katsuki Bakugou and this week, my gay ass found out that not only does Kirishima wear his hair down after showers and before bed, he also wears it down and in a ponytail after very long practice matches and my towel now has scorch marks on it. I’m pining way too hard.

Midoriya: Hi, my name is Izuku Midoriya and this week Shouto went to visit his mom and he asked me to go with him. My gay ass was extremely flattered and his mom is the sweetest person alive. She showed me picture of him when he was a baby and my inner bi went into full disaster mode and I almost fainted. I’m pining way too hard.

Jirou: Hi, my name is Kyouka Jirou and this week my gay ass had a brain aneurism after seeing Yaomomo with makeup on for the first time. She had a evening dinner with her parents and she wanted to look “presentable”. I’m not entirely sure what happened after, I just know she looked like a goddess. I’m pining way too hard.

Tamaki: Um, hello, my name is Tamaki Amajiki and this week Mirio and I were training and my gay ass couldn’t find my water bottle, so he offered me some water from his own. I mentally combusted once I realized it was technically an indirect kiss. I’m pining way too hard.

Tokoyami: Good evening, my name is Fumikage Tokoyami and this week my gay ass accidentally bumped into Shoji’s desk and I dropped his books. I apologized multiple times but he was an angel and told me it was “no big deal”. I offered to buy him ice cream and had a mental breakdown afterwards. I’m pining way too hard.

Kaminari: Hey everyone, my name is Denki Kaminari and this week my gay ass built up enough courage to ask Shinsou to train with me. He agreed and I immediately realized how simultaneously horrible and amazing of an idea that was because after we trained he was extremely sweaty and he had to take off his shirt and I wasn’t sure if it was a miracle sent from the gods or a punishment for all the times I used Sero’s toothbrush on accident. I’m pining way too hard.

Uraraka: Hi, I’m Ochako Uraraka and this week, my gay ass offered Tsu a candy bar and she accepted it. She thanked me for it and said it was delicious. I told her it was homemade and she said we should make some together sometime and my face was about as red as Deku’s shoes. I’m pining way too hard.

Kaminari: Well, that concludes are weekly recap, any questions?

Midoriya: I said it was his power.

Midoriya: He used his left side for me.

A Miritama doodle page I just decided to color and shade

Here is a collection of one-shots featuring everyone’s loveable and sweet cinnamon roll, Izuku, healing people with not only her quirk but her heart as well! 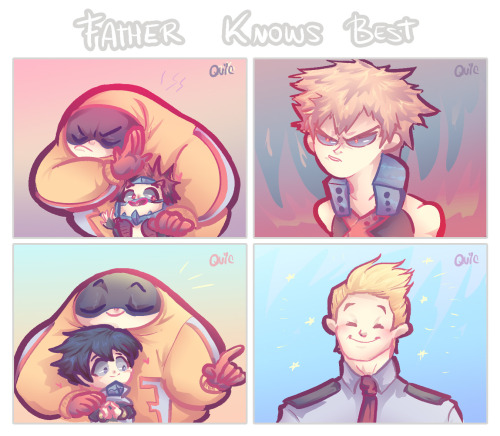 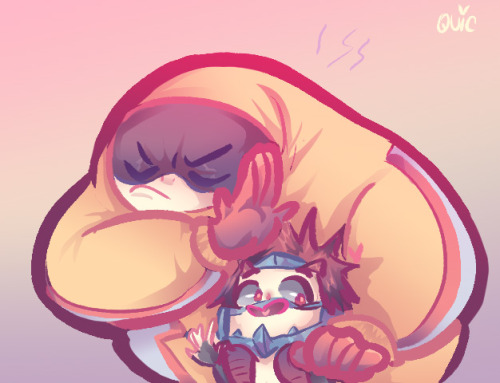 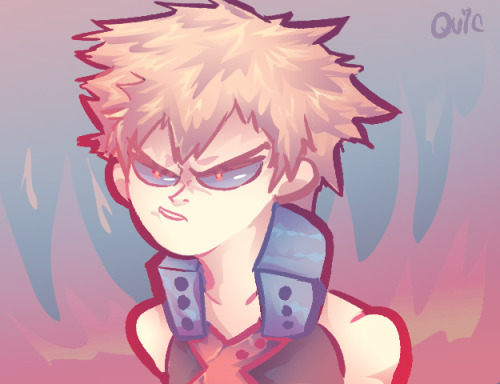 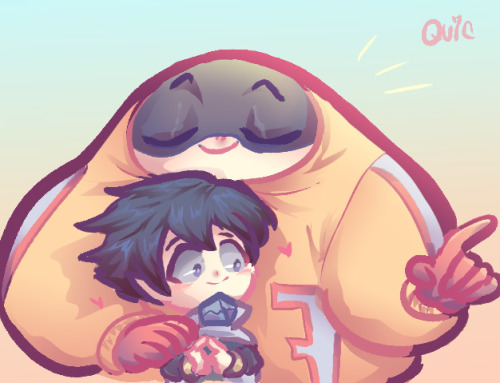 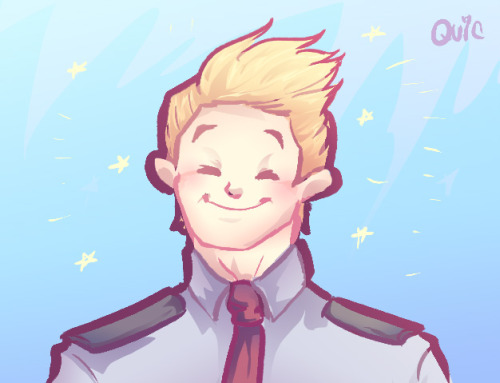 This has been sitting in my askbox for ages and I just really hope this anon hasn’t deleted their blog since they sent me this request. I’m living up to my blog’s title.

This is set before the nightmare that is the Shie Hassaikai arc. Content includes vomiting, some discussion of mental health, Tamaki being a ball of insecurity and anxiety, and way more MiriTama than was implied in the request.

Mirio is starting to feel a little helpless, if he’s being honest.

He’d never tell Tamaki that, of course, because right now Tamaki is depending on him not being helpless. Because right now, Tamaki himself is feeling absolutely helpless, beyond anything Mirio can even imagine. So Mirio sucks it up, all his personal discomfort, because if he gives into that Tamaki will freak out even more than he already is.

And Tamaki is absolutely freaking out. Mirio is fairly sure he’s been in a constant anxiety attack for the better part of two hours, now. Or, quite possibly, longer than that, because two hours ago was just when Mirio found him. He still doesn’t know how long exactly this has been going on. 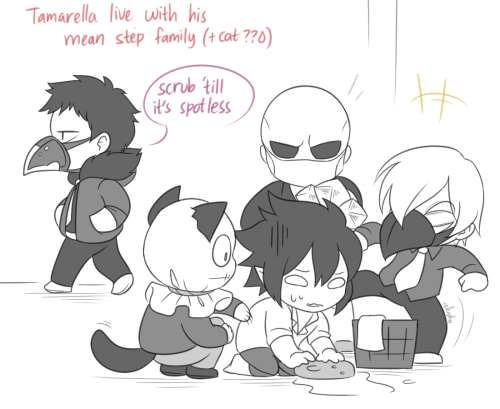 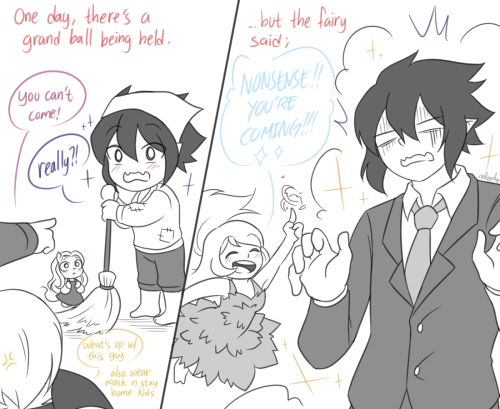 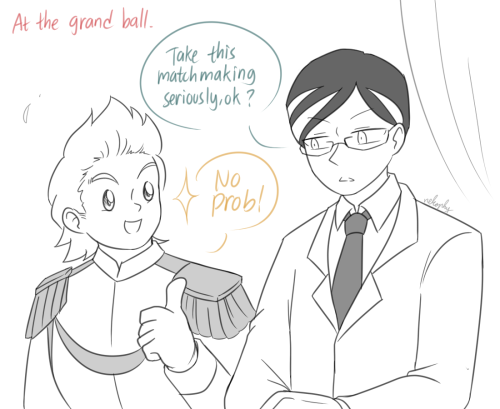 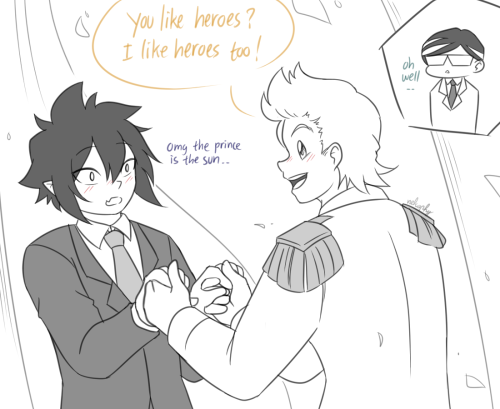 our chemistry is no rocket science
by evvi

Five different ways that Kirishima and Bakugo’s friends discover their feelings for each other (and the one relationship transformed by its announcement).

Posted N-SFW expressions on twitter (@yumenomu) and instagram (@yumenofude)! Half of them remain exclusive to my patrons, though, and I’m currently taking new asks - from the cute ones (just like Sabo above) to the most explicit ones (that are not posted). Link in bio! A little transparent minor edit of Tamaki anxiously clutching Mirio’s arm for your needs! Free to use w/o credit, just don’t claim as your own please!

#miritama, #amajiki tamaki, #togata mirio, #bnha, #mha, #edits
135 notes · See All
bnha-cultAnswer
Do the songs for your face mha character and/or ship that you never get to talk about

i did a collab on instagram with a friend for valentines day, pretty sure i never posted it lmao

miritama drawing for a zine 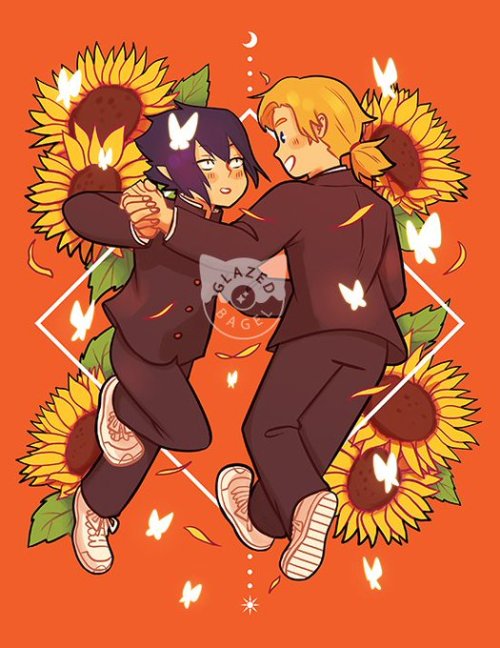 Basically, Tamaki and Katsuki are partnered up for some big mission, there’s a lot of teams, and these two need to be together for Reasons, but holy fuck they do not get along at all. Both of them are high anxiety, but Katsuki is 99% fight response while Tamaki is 99% flight response, so they just clash on everything.

The mission ends up going south, weirdly enough not due to them but due to Other Reasons, and everyone else but them gets captured. That means it’s all up to them to save the others. Katsuki is forging ahead while Tamaki is basically having an ongoing panic attack, and at some point, Tamaki freezes up and Katsuki gets seriously hurt pulling him out of the line of fire.

Bad guys are closing in. Katsuki is barely conscious, and Tamaki is so fucking frustrated with himself because all his body wants to do is hide. He wishes, desperately that he had even a drop of Katsuki’s confidence and willingness to run headfirst into things, because maybe then he could actually fucking do something.

And then he suddenly remembers what his quirk is.

And he notices that there’s an awful lot of Katsuki’s blood around.

He wouldn’t have done it if he wasn’t desperate. He’s never tried to manifest a trait from a person before, but fuck it, now is the time to learn new skills. Because if he doesn’t, he might not get a tomorrow.

Tamaki scoops up some of Katsuki’s blood that spilled out, slurps it down and straight up tries to manifest his confidence.

Holy shit, does it work.

Tamaki goes from having to fight to keep himself together to a huge rush of adrenaline and confidence. It’s exactly what he needed to launch an attack against the bad guys trying to corner them, and the bad guys are so fucking shocked that it works.

From there, Tamaki just goes on a fucking rampage with his newly found Baku Rage Aura. He is ruthless, confident, and ready to just fucking deck anyone that gets too close to him. It doesn’t take him long to clear out the rest of the bad guys between him and their captured teammates.

Mirio almost has a fucking heart attack when Tamaki just kicks down the metal door, still not wearing shoes mind you, and starts screaming obscenities at the Big Bad who’d captured them. Poor asshole never stood a chance.

Once Tamaki’s got everyone rescued, there’s still some confidence left in him which he uses to yell about his feelings for Mirio in front of everyone, tell Kirishima that he thinks he’s a wonderful ball of sunshine, and tell Fat Gum that he’s a lovely mentor who Tamaki trusts and cares about.

Then the confidence high wears off and Tamaki promptly passes the fuck out.

He wakes up in the aftermath after everyone’s gotten to safety, people have been arrested,and most people have gotten medical attention. Instantly he’s fucking mortified, and he assumes that Katsuki’s gonna be super pissed at him but Katsuki’s just like,

“Are you kidding me that was the funniest thing I’ve seen in my life, here, I got the medics to save the rest of my excess blood for you, let’s test this shit out.”

Tamaki, hiding in Mirio’s chest because Mirio is currently carrying him for reasons: “Please if there is a god above kill me now before-”

The ominous scratching of Izuku’s notebook and his muttering starts in the distance.

I colored another one (✿❛◡❛) 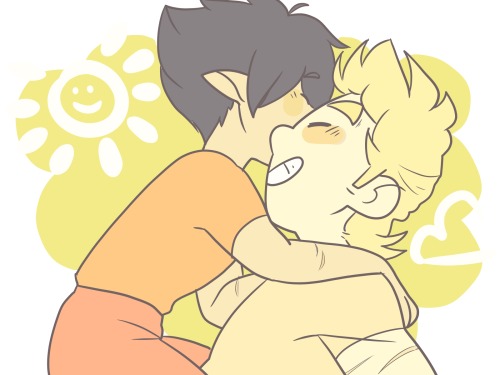