this took me literally all day but i wanted to try my hand at making a fancam for my favorite girl! it’s pretty basic but i feel like the other two versions (because i almost always have more than one version of digital stuff i make) were kinda overwhelming and distracting. maybe i can be convinced to post them. i probably wont make a habit of making fancams because this took forever and prequel’s free trial only last 3 days, but this was a fun experience!

#marlene mcfly#back to the future#bttf#fan art#my art#original entry#part of the reason it took so long was bc i started making it with kapwing but it kept fucking up when i added in the audio#so i just ended up using imovie even tho i wouldve preferred to do it on my laptop#and then i used prequel for the effect. i DO have a fourth version actually w a different vhs effect from an app whose name i cannot remembe#capcut thats what its called#i still have it installed lol#also i will probably never listen to this song again haha now that ive listened to this 20 sec clip ALL DAY#i hope this looks ok on various screens and screen brightnesses#i did this with the brightness halfway up and usually keep my brightness all the way down
2 notes
skulls-and-stripes
Photo

mmm this is prolly gonna flop but ,,, first attempt at bojerb art 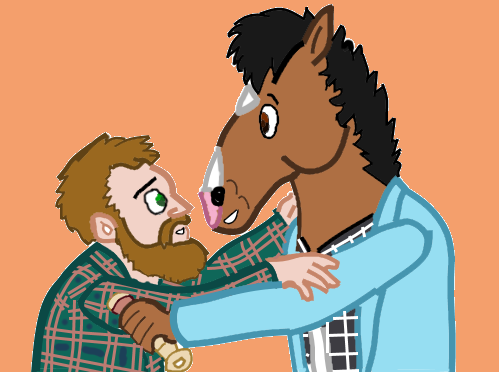 #gah i normally never make art let alone post it but. kept seeing hambone-fakenameington's bojerb art on my dash and it made me want to try#bojack horseman#bojack#herb kazzaz#bojerb#boherb#<tagging both but remaining convinced bojerb is the only valid ship name#grrr this is so shit i didnt even bother shading as you can tell. hope i dont get hate#my art#harping on#the future is bright#kin tag
5 notes
lady-arryn
Photo

The Future Is Bright

These may not be the images that get the most likes on social media (unless you’re a celebrity), but they are often the moments that, when we close our eyes and settle into the contentment and satisfaction of an event, that we return to…

Yesterday, at hour of 1 o’clock on a random Tuesday, I started working in a new position, trying to get my workflow rhythm going. I told myself I was going to implement daily naps into my schedule where some might put their lunch breaks.

But there I was, awake, blogging and listening to NPR. Why? Because I was brimming with hope and excitement while standing in the middle of a proverbial…

#well alright maybe for more than a moment lol#a moment that lasted 1500 yrs?#anyway#i rlly dont know much abt icarus’ story#but from what i do know#arthur as icarus n merlin as the sun makes more sense in this context than the other way around#to me gyygvuninibg#like. i love the arthur/sun/anything golden connections more than anything#(no. seriously. they make me so soft and happy and warm inside)#but like. idk.#arthur striving to be the once and future king only to be killed on his way there?#merlin being this universal constant that - at least - /feels/ eternal?#the light merlin shed on arthurs life? the warmth of companionship he brought with him?#how merlins great destiny of burning bright as the most powerful sorcerer#next to his king#is what technically planted the seeds that would one day lead to arthurs death?#idk#feels like arthurs icarus n merlins the sun to me#hope u like this!#bbc merlin#merthur#merlinedit#merthuredit#arthur pendragon
177 notes
vitaminbtob
Text

Peniel: If it excites you and scares you at the same time, you should probably do it.

Changsub: Time to slap Sungjae while he is sleeping.

[P.S: Idea is not mine it just popped up on my pinterest]

I’ve heard a lot of expectations for the new year and a lot of people saying it’s stupid or naïve to think that a new calander is magically going to make everything better. And as it’s New Years Eve in my timezone, I thought I’d address it.

Hanging up a new calander may not fix all the problems in the world, but it’s still an important symbol.

It symbolizes a fresh start. It lets people put all the bad things they’ve suffered behind them and look towards the future. It’s a symbol of hope, telling people that they made it through an entire nother year, which for some people is a huge accomplishment.

It may not fix the world, but it does put us in a fresh mindset. A positive mindset. A hopeful mindset. It tells people it’s a brand new year, filled with new events to take place. New milestones to look forward to. A fresh start. And for people who have suffered this year, that’s so important for their mental health.

So just because it’s not a magical cure all for the world’s problems doesn’t mean it’s not an important symbol of hope and the future.

Just because you may not be looking forward to it doesn’t mean there aren’t things to look forward to.

#so don't call people stupid or naïve for looking forward to 2021#don't call people stupid or naïve for having hope and wanting a better future#just because they're an optimist doesn't mean they're stupid#it just means they have the wonderful ability to look on the bright side and see the good in things when everyone else is crumbling#just because you can't see the silver lining doesn't mean it's not real#feel free to tag or @ anyone who needs this.#important#symbols are one if the most meaningful and impactful parts of culture#so let people have them
2 notes
last-of-the-jaded
Text