The new chapter’s out

Undertaker and Sebastain looking at William: 😍😍😍😍😍😍

I wish I can draw undertaker in this myself but alas I cant right now ..but undertaker get in these boots now whore !!

#kuroshitsuji, #undertaker, #i very much would like to think grell would love the chance to dress him herself ..., #my posts
3 notes · See All
adriheavymetalVideo

Thank you all so much!!!

In honour (eventually, when I have time) I’m going to write a multi chapter fic with Undertaker. I mentioned this a while ago and this is just another teaser. It takes place in modern times but simultaneously is set before the manga begins, whilst Undertaker is still working with Dispatch and before Grell, William and Co become reapers. Reader is gender neutral as usual and it’s something of a slow burn, irregular updates are a guarantee (it’s me. I’m incapable of posting regularly that wouldn’t be any fun). I’m also planning something for Halloween, so watch this space!

Hope everyone’s keeping safe and thanks again for 500!!

Took a while for me to get to this one, but here it is. The last overview post for ch169.

and Undertaker’s response is actually hard to read. It’s a laugh, but it’s a short laugh that might mean something other than amusement. Lord Ciel, as he wants to be called now, is very pleased, much to Polaris’ dismay.

Lord Ciel sees this merely as a fight with his brother, discounting all the collateral damage and the lives it’s costing. It’s like a game of chess to him, so it’s all about strategy. He has said before that our earl and their dad were the only ones who gave him a good game of chess.

Something still feels forced about Undertaker’s laughter, but I do think he’s pleased that Lord Ciel is pleased. What does he really think about this fight?

Polaris goes into a fit of rage, knocking things off tables, tearing up the drapes. His focus is not so much on their enemy, our earl, as it is about what will happen if they fail and cannot provide Lord Ciel with enough blood. He wishes he had killed all of the people involved at Heathfield’s manor.

Then Polaris is down on the floor, stabbing the flooring, and he says it’s not too late to kill them. He would utterly destroy them.

Lord Ciel reminds Polaris that he goes by “Lord Ciel” now, not “Lord Sirius”. That’s because they are trying to make everyone else think that our earl is Lord Sirius and the one behind the blood draining deaths at Sphere Music Hall. Some bloggers have suggested that Polaris knows our earl and used to call him by another name. I think that’s entirely possible. But instead of Joker once calling him Smile, I’m thinking of how the previous Phantomhive servants would have called him by Lord (whatever his name is). Either way, this is a good way to avoid calling our earl by his real name or exposing Polaris’ identity… yet.

We also get confirmation here that, without a doubt, Polaris is also a bizarre doll who needs a blood supply.

Polaris is truly terrified that he could lose his master again. Was that previous master Vincent Phantomhive? Was it someone else? Some say Kelvin, but it doesn’t feel right to me. Joker didn’t call Kelvin “master” but “father”, and the only reason he stayed loyal to Kelvin was because of what he had done for him and his friends. He thought the workhouse was still running and that Kelvin would continue to help other disadvantaged people. He died not knowing the truth about the workhouse, but he knew Kelvin was a terrible person. Also, why would someone like Joker become obsessive about serving a kid who looks like the boy who got him and his found family killed? I know I’ve said it before, but it bears repeating. “I can’t even imagine where else I could be” suggests he has no one and nowhere else to go to. Would Joker have nowhere else to go? Idk.

He’s a butler, even in death. Again, this does not sound like anyone from the circus. It sounds like someone who was a full-on butler before death… and Joker was not. He was more like an adopted son to Kelvin, which is why he and the others called Kelvin “father”. He spent most of his time with the traveling circus and visited “father” from time to time, usually to bring children or important news. And he was forced to put on circus shows for Kelvin… using lobotomized children for the acts (which he hated). Kelvin’s household staff were actually just more of those children, at least the ones we saw. Hard to imagine those kids cooking the huge feasts, but I digress.

Thats all i wanted to show u. Haveaniceday

I forgot about tattoos again, when I drew them in sketch ;-; Also - I remember he said he likes country, so I drew him, when he’s playing on classic guitar. 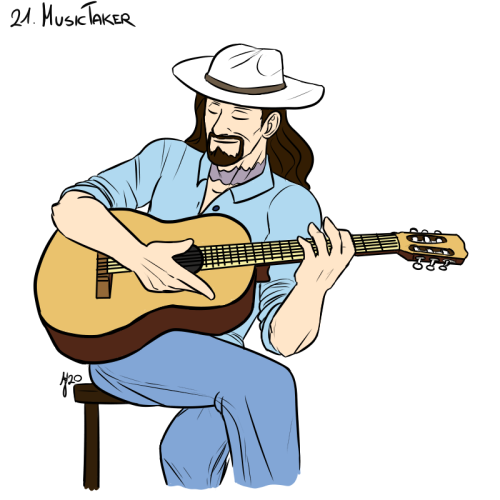 How to restrain the Undertaker 101: Pull his hair, he seems to like it, and it makes him stop whatever he’s doing

They sit and read cute tho’ 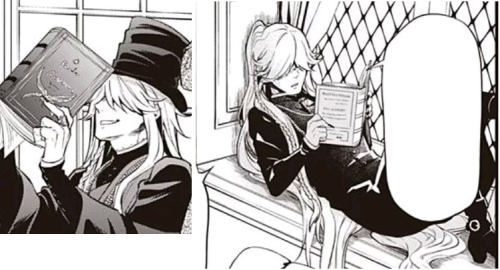 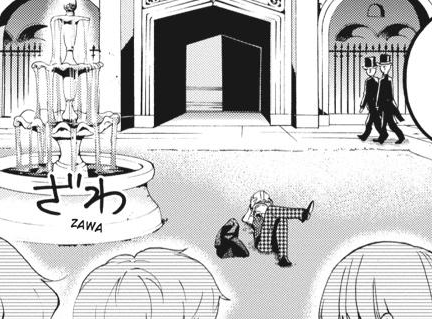 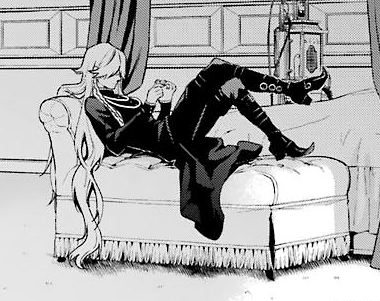 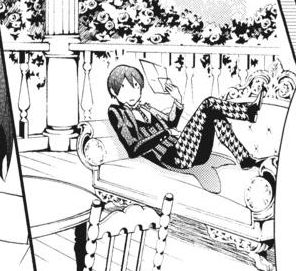 no theory from me about who polaris is (besides it not being agni). shit is making me tired I have too much schoolwork and just wanna be surprised 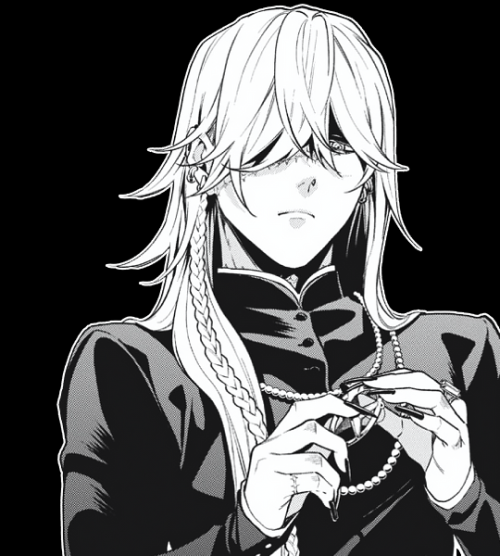 #kuroshitsuji, #kuroshitsujigraphics, #kuroshitsujiedits, #spoilers, #mangaedit, #undertaker, #~mine, #kat r u seeing this, #bec no one was posting edits of our bae here is one, #he's so handsome wtf, #he's so pretty wtf
44 notes · See All
ava-valerieText

The confirmation that Polaris is, indeed, a bizarre doll…

And his impressive breakdown…

Make me wonder just how much Undertaker could have experimented on this guy. He sounds utterly and completely out of it, to me.

…seriously has me thinking.

If so, then Undertaker’s reaction to his words here has me thinking that, perhaps, the former master Polaris is talking about is actually Vincent. Diedrich mentioned in the past how Vincent also had ‘special’ servants, just that they were different from our!Ciel’s, and Polaris would fit like a glove. Polaris would literally fit perfectly. If I find it, I will add here the panel of what Diedrich said.

The problem is, if this guy was only a random butler/servant Vincent had that we’ve never seen or cared about before, why all this secrecy around him? Why still keep his face hidden? All this secrecy keeps hinting that this guy is, indeed, someone we already know.

It’s also possible that he wasn’t necessarily Vincent’s butler. Perhaps Undertaker reacted like that just because he knows who that master was, and that’s it. So his master could be someone else entirely. But even so, I still can’t think of such a… um, passionate dead butler.

Which brings me to my other possibility, which kind of goes a bit deep into crack theory territory. Maybe, just maybe, this guy wasn’t even a butler.

As I said before, it looks to me like this guy has been heavily experimented on. He has the most commonly found blood type in the Kuro universe, so Undertaker probably had the freedom to do what he wanted with him. Plus, his strength and agility are also suspicious. Now that we know that he is a bizarre doll (with unlimited blood supply, kind of), maybe his strength and/or agility are also due to… certain enhancements.

And we also know that bizarre dolls can still function even with someone else’s cinematic records. So I wonder, could this duty of his to protect his master actually be fake? Could it be that Undertaker created this Polaris person as a sort of parallel to Sebastian? For Real!Ciel? It is something I wonder.

Now, although, at least for now, I’m leaning more towards the idea that he might have indeed been some sort of butler who failed to protect his master (though, again, no one from the past really stands out to me in this case?), I keep all other possibilities open. I really think that Undertaker could have just edited his cinematic records so much that he has lost it. Literally.

Any thoughts? And thank you for reading if you’ve gotten this far!

#theory, #kuro theories, #polaris, #undertaker, #bizarre dolls, #vincent, #real ciel, #kuroshitsuji, #ch169, #sigh this feels messy, #i've rewritten this theory 4 times and it still feels messy, #i give up, #it is what is, #i need this for my next post so it stays like this this for now
43 notes · See All
Next Page