They All Laughed // Tony Bennett

You Want It Darker // Leonard Cohen

Under The Table // Fiona Apple

Why I love Alfred Pennyworth.

Damian: Jason, can I interview you for a school project?

Damian: Alright, first question, “What has been your biggest support in life?”

Jason: Well. My arms have always been by my side

Jason: I can always count on my fingers

Jason: But my legs have always supported me

Dick: Don’t forget your hips for not lying 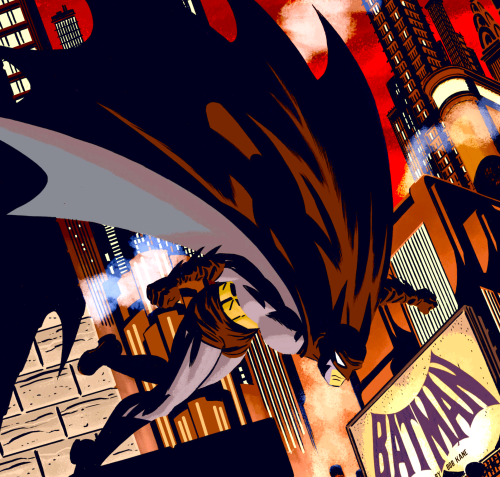 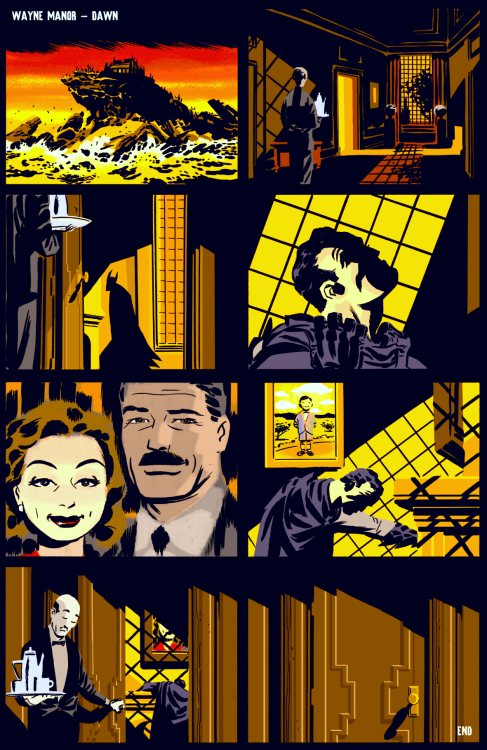 Summary: A magic artifact de-age Dick, Jason, and Tim all down to thirteen years old, with no memories of being older, and now Bruce has four Robins to deal with.

Reader’s Comments: This story is hilarious because all of the Robins are the same age, which means Bruce is going to get So Many More grey hairs. It is adorable and has so much fluff with just a dash of angst, and an overall perfect story. I also loved the way that you got to see the way they compare to one another at the same age and how they have change and grown over time. 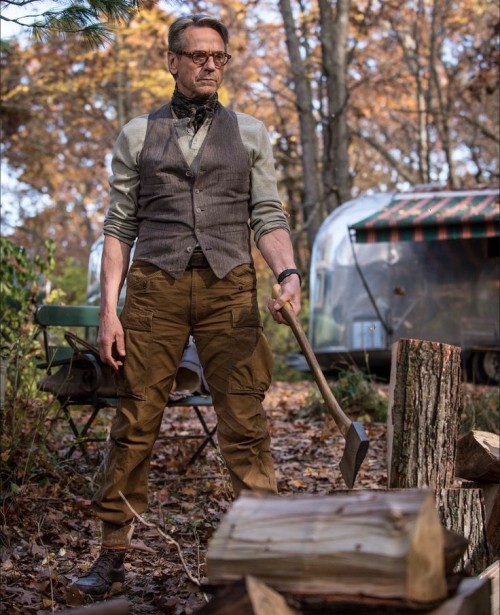 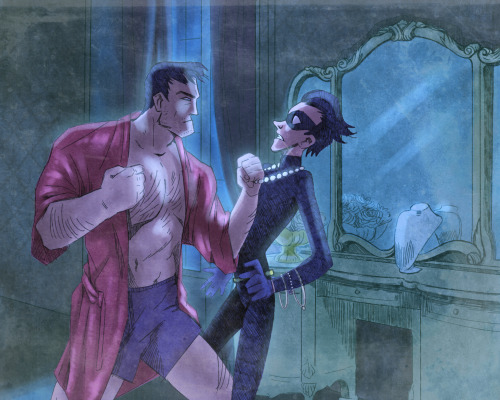 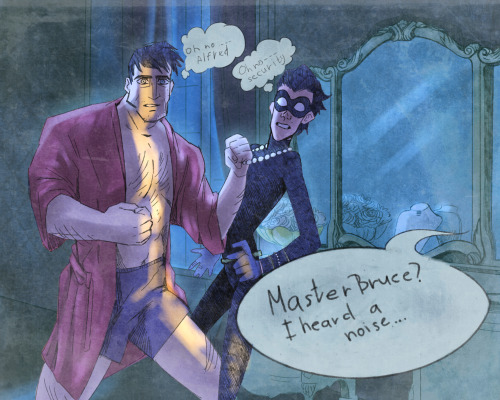 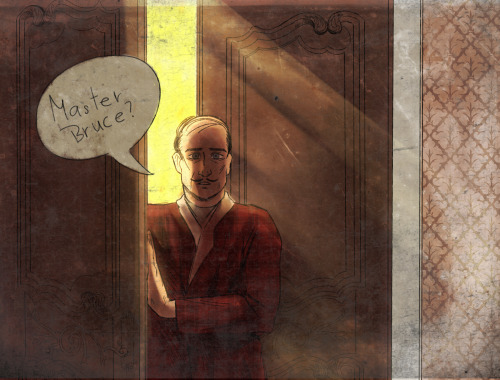 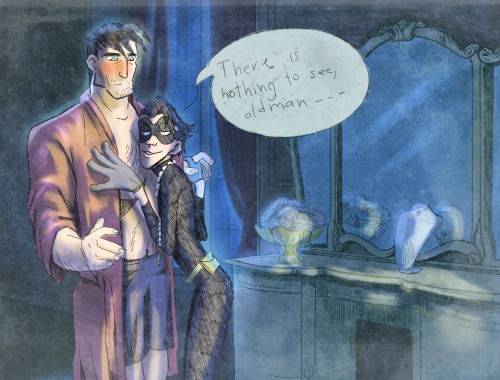 MLB X DC Prompt: If you asked Bruce, he would tell you it wasn’t his fault. His sons however would beg to differ. Who knew adopting Black haired, blue eyed kids was a disease that could be passed on?

Alfred didn’t know what made him adopt the French orphan he and the Wayne’s stumbled upon on a trip to Paris. The popular option was that he picked up on Master Bruce’s tendency to adopt sidekicks, but Alfred personally thought it was her big blue eyes, and too forced smile that silently begged someone, anyone to understand.

Marinette was young when she lost her parents. She doesn’t remember much of her parents, just that they liked baking, and they always encouraged her to be happy, so she tried. She tried so hard to be happy. At age 13, going on 14, shes given up hope on leaving the system. It doesn’t bother her too much, after all shes a hero and the Guardian now, she doesn’t have the time to dwell on it. But then, who’s this old man the orphanage worker has brought her to?

AKA Marinette is an orphan that meets the Wayne’s when they go to paris for business reasons and Alfred adopts her because Bruce is contagious. Also if Alfred hadn’t adopted her, Bruce would have, let’s be honest.

Tag or Link me if you do this. I have no self control.

Bruce: So, at the request of Alfred, we will be adding a swear jar!

Tim: What the shit?

Jason: Why are we fucking doing this?

Stephanie: Yeah, we don’t have a fucking swearing problem!

Bruce: Stop! We get it! But, here are the rules, each person has to pay with their own money, when the jar fills up, then we can go on a vacation!

Bruce: Yeah I had this coming!

Dick: Okay, I want to start off today….

Dick: *falls forward* AAAAHHHHH!!!! *gets up* Damian, sit in time out!

Dick: Anyway, I’d like to talk about the Tuesday incident.

Red Robin and Spoiler: *making out*

Signal: *turns around* Did you guys hear what I said?

Signal: DAMN IT GUYS LET EACH OTHER BREATHE!!!

Thug: OVER THERE!!! *points in their direction and starts firing*

Stephanie: I don’t see a problem.

Tim: Neither do I!

Dick: You guys were making out when you should have been taking out the thugs! Duke was the only one on task until you guys pissed him off.

Duke: Could I permanently work with someone else?

Dick: We’ll talk about that later.

Red Hood: Oh, so Spoiler could say it but I can’t!

Barbara: So who’s been the biggest contributor?

Jason: *from the other room* Well eat shit you sad little fuck!

Stephanie: Then in that case….

Damian: Brown, let me stop you right there. It took me a while to listen to one of there songs. What makes you think I would actually listen to more. It’s a nice song, just leave it at that.

Dick: So there is thirteen through nineteen with the word teen in it. So why isn’t eleven pronounced firteen or oneteen, and twelve twoteen or seconteen?

Duke: And that is why you don’t do drugs kids.

Dick: No, seriously think about it. One to twelve, totally original numbers, then they start getting lazy adding teen at the end of four, five, and so on until twenty. Then they just add the number after that. And after twenty-nine they get even lazier and take one number, add t-y at the end of it, then add another number until one hundred. It is just so lazy.

Stephanie: Are you sure you’re not high?

Red Hood: *crouching like a gargoyle behind some boxes*

Duke: *dismounts off of the high bar with a layout twist*

Dick: You ready to spar.

Duke: Hell no! *runs out the door*

Tim: *doing an Instagram live stream at the manor with Dick and Duke*

Dick: Thank you Cass! OMG you are my favorite!

Tim: But yeah, I think that if there was a reality show about us it would be surprisingly boring.

Dick: *stuffing his face with a cupcake* Tim, Cass bought a ton of cupcakes, do you want one?

Tim: I think I’ll save mine for later.

Dick: *stumbles and drops the trey* Nooooo! The cupcakes!

Duke: I remember, right when Bruce adopted me, we spent a day in the park. We were sitting, eating, and then there was Dick from across the park just running with a kite, and shouting and throwing things at us, and Tim stood up and yelled “You’re a child!” And I sat there thinking “What have I gotten into?”

Bruce: Okay, it has been a week and we had to get a second jar, so we’re just going to cancel the swear jar. Partially because you all ran out of money to put in the jar. Also a bit because I’m tired of filling it up myself.

Jason: So, can I have my money back.

Alfred - Master Bruce, we have a guest

Bruce - Can it wait Alfred–

Bruce, defensively - Shiva! Whatever it is you’re doing here-

Shiva, holding Cass - I got you some presents AND there’s people here to see you

Bruce - A-Alfred? Did I miss some message?

Alfred - About seven sir, they were coming regardless of your answer

aka after Bruce brought the papers to court and legally adopted her after the end of Batgirl v2 :)

(Before anyone ask where the others are: Damian hadn’t properly joined the family at this point, Jason is still dead (ha), Steph chose not to join bc she and the family has a complicated relationship. And Babs is the closest thing to a mother Cass had<3) 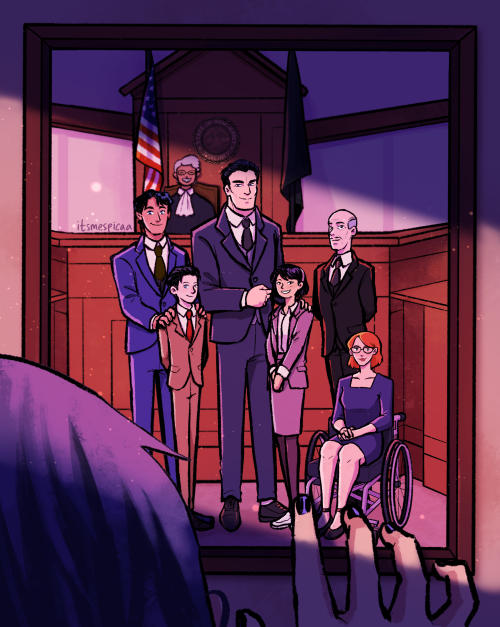 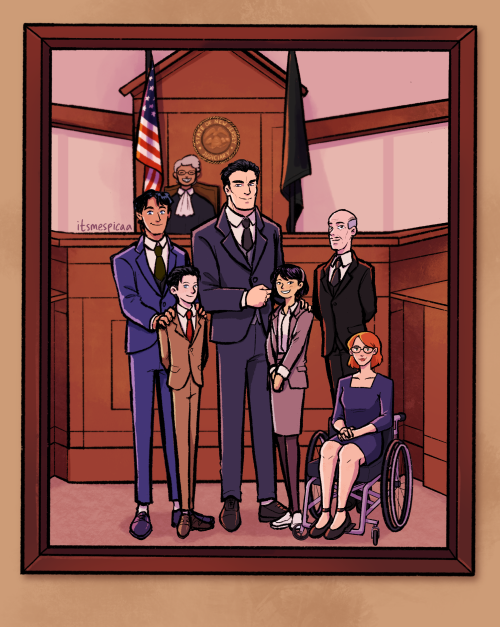 Yo, here’s a thing a wrote a while back and decided today was the day to post it. Anyway, I totally ignored canon for this but when do I not? Enjoy!

Tim groaned as he lay in bed. This was the worst. Being on bed rest with a broken leg? Bad. But your (adoptive) father calling your (adoptive) brother, who, by the way, only just got over not trying to murder you to come by and look after you while he goes off on a trip? Worse. That was worse.

“Every friend group should include

An even meaner lesbian

An astrology bitch who has everyone’s birth chart memorized

And a short king”

“Master Bruce,” Alfred began, with a look of disdain on his face.

“With all due respect, what the actual fuck.”