Oh, agreed. The way she was piloting that mecha in Amity, you know she’s damn good. I could probably do a sequel to the driver ratings post, tbh.

María: You know, after all these years, it would be nice to feel wanted.

Qrow: Not by the Atlas military.

Qrow: I think I could take on another kid.

María: Because by ‘take on another kid’ you mean ‘adopt them’ and you already have eight of those.

Qrow: *steps aside to reveal Penny, Whitley and Emerald* Eleven.

Cicero: Grandma, I think I left a bag at your house

Maria: That’s your brain trying to comprehend its own stupidity.

The upskirt view is what finished Neo off. 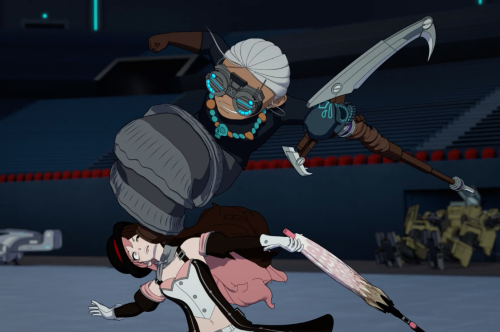 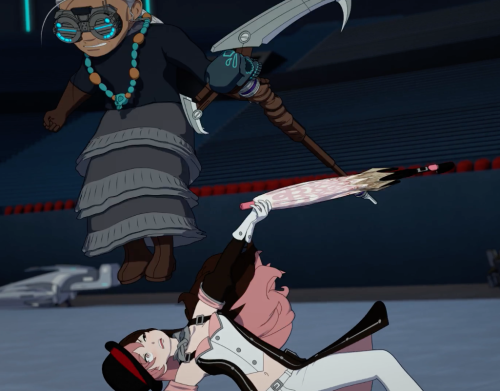 Y’all are Maria and Pietro ok? I just relized we haven’t seen em since Penny fell from the sky 0-0

So the point was to make these drawings as shitty as possible, and I think it worked.
You know, not looking at the pictures of the characters, no references, nothing. Combine in with my shitposter humour and we got this

(Also, Salem would be a theatre kid, no question. The drama, being THIS EXTRA) 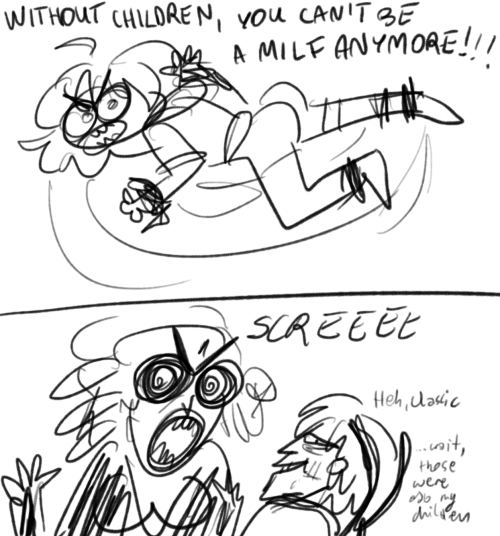 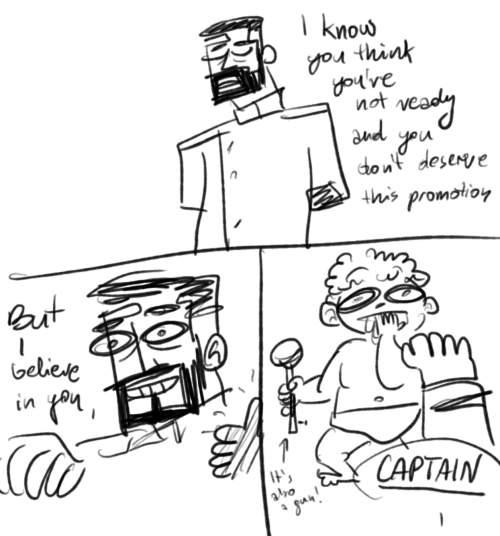 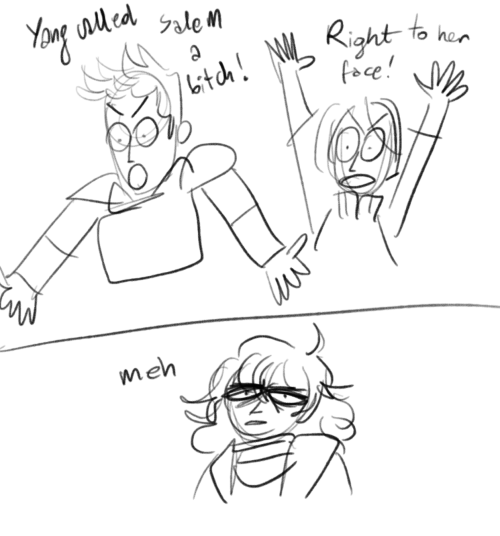 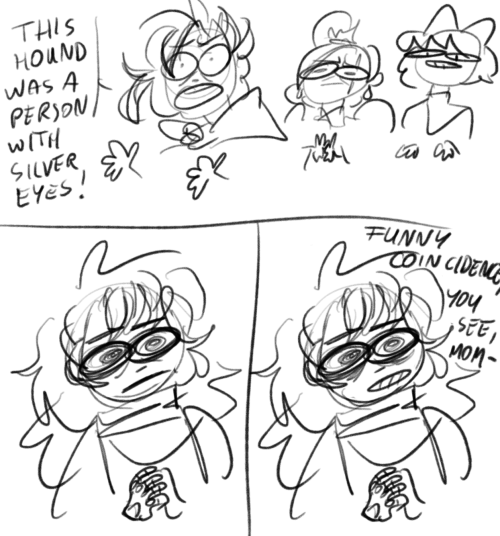 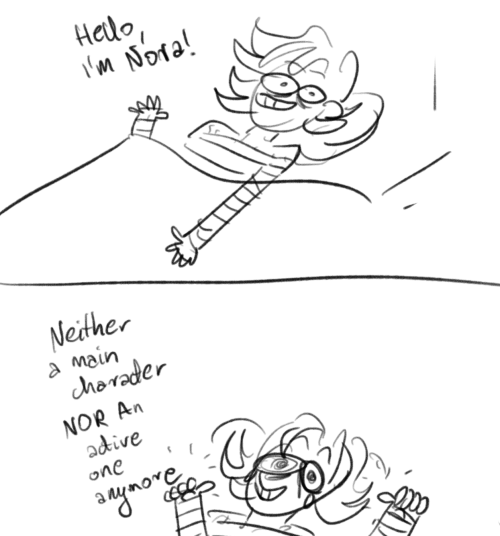 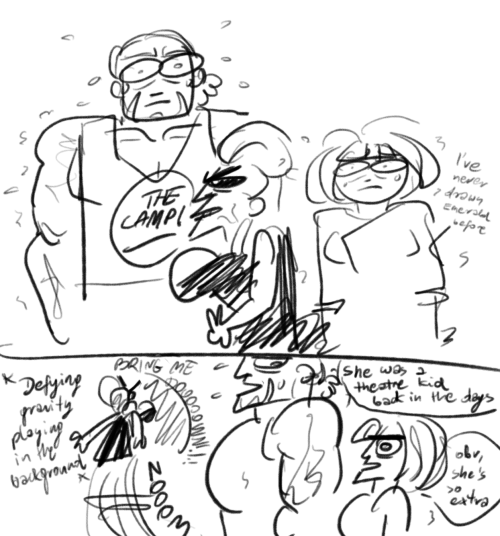 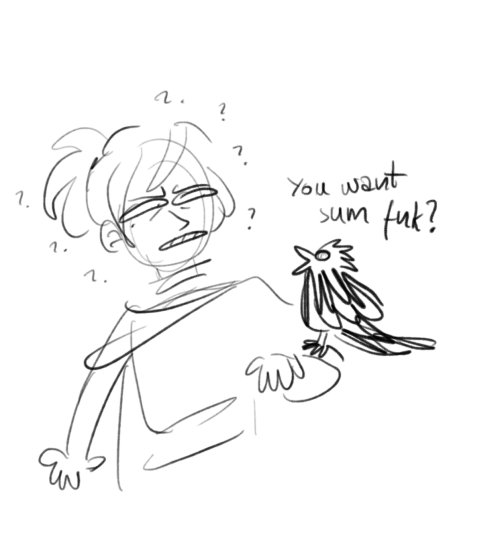 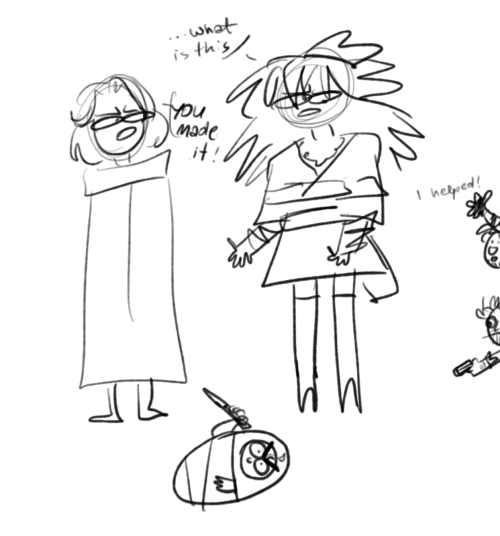 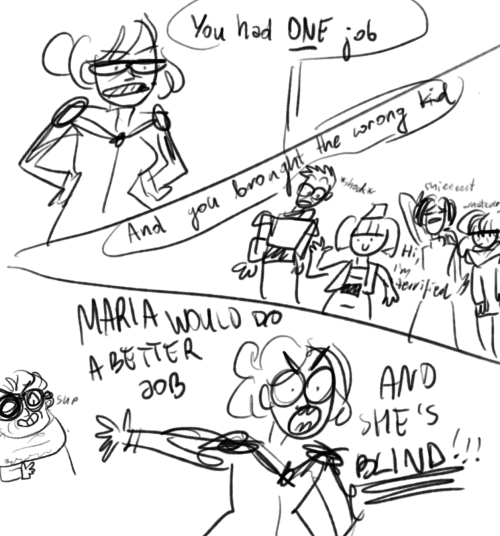 Send one to your crush (100% guaranteed to work)

So most people say no. 🥲

“I’m the One” was as someone pointed out to me the string cadence in Episode 4. It might have been the bass line supporting Neo’s leitmotif after Maria on distorted (or overdriven?) guitar in Episode 5, and after there is a basso ostinato around Penny versus Cinder up to Cinder’s charge. Episode 7 more strings after Salem’s conducting*

I am just starting to miss them and want to know what everyone else thinks on the likely hood of seeing them next chapter.

Ruby: *watching an airship circle around, clearly looking for a landing spot* Guess my friends are here.

Maria: Looks like you’re out of time to rest.

Ruby: *nodding as she watched the airship disappear behind a few trees as it landed* Yeah, guess I am.

Maria: *walking back into her hut* Just remember what I told you. You’ll have to work with your friends.

Yang: *rushing through the trees with Blake and Weiss behind her* Ruby!

Yang: I’m glad you’re okay. When we heard you had been in a mining camp, we were a bit worried.

Ruby: I hope you didnt give Weiss too hard of a time over it.

Blake: *frowning* It was her fault-

Weiss: Ha! Told you I was innocent!

Yang: *rolling her eyes at Weiss* Okay, so if it wasnt her, then who?

Ruby: Some spider faunus. *walking off to the airship* Which reminds me, we should free those faunus.

Blake: *smiling and following Ruby* I’m down for that.

Weiss: *trailing behind her team* You three go ahead and do that. I’m… going to sit this one out.

Yang: What, too good to help a few faunus?

Weiss: *shaking her head and entering the airship last* Just… have a few things to think over.

Yang: *walking to the airship* As long as it’s not-

Oobleck: *waiting for them* Ah, there you three are!

Blake: *sighing* You… shouldnt have said anything.

Weiss: He is an accomplished hunter…

Oobleck: *walking onto the airship* We mustn’t waste time. Who knows what kind of danger Miss Khan-Rose is in.

Yang: *following Oobleck* He’s got a point. Hopefully Ruby isnt in too much danger.

Ruby: *leaning back in a chair, groaning* This… is… boring…

Maria: *changing Ruby’s bandages* And you still need to heal. Your aura can only do so much.

Ruby: Okay but… I should be trying to help free those other faunus in the mine-

Maria: *glaring at Ruby* You are in no condition to do this.

Maria: Besides, what do you expect to do against the SDC? You’re a faunus yourself. You’ll just get  caught again.

Ruby: *sighing* I cant just do nothing…

Maria: No one is telling you not to. But right now, there isnt much you can do until you’re fully healed.

Ruby: You… have a point.

Maria: Now rest. I’m sure your friends or family will be here soon.

The real way to defeat Cinder

Jaune: I’ll stop her! With the method that Ms. Calavera show me!

Cinder: what the..? [Throws balls of fire to him]

Cinder: are you serious boy?

Jaune: for all the people who hurted you~ you had to suffer the pain of too many girls as you🎵

Jaune: si puedes perdonar~ if you can forgive~ the peace will come~🎶

Cinder: … All i ever wanted was… Peace…right? It wasn’t…it wasn’t power…

Jaune: yep [cuts her grimm arm and immediately heals her with his aura]

Maria: nothing like a good serenata to stop a crazy woman

Blake: maybe we should use this with Sale-

Oscar: nop! It doesn’t works on her believe me

I’m telling you now, this half of volume 8 will be the volume of the short kings*