We will forever love and miss you

And some may say

When usually it’s nothing

It should be this way

Peter, running in the living area: I DIDN’T DO IT

Tony: *looking at the opened fridge, ice cream tripping on the floor*

Peter: yeah, i did do that.

tony : so peter got his wisdom teeth out the other day and they had to give him the really strong stuff for the pain because of his metabolism , right ?

tony : when they were done and he was awake , he started crying because they , and i quote , ‘ stole his teeth ‘ and he wanted them back

peter : you promised you wouldn’t tell anybody !

Steve: Can I call you

Stephen: I said you could call me not that I’d pick up

everyone in the avengers compound:

Peter: why is everyone staring at me?

Tony: do you see me as a father figure, kid?

Peter: nO, if anything I see you as a bother figure, because you’re always bothering me

Geez, that was a while ago…

Sorry about that, Anon!

Here’s a short little scene about some idiots breaking into the Jack’s tower to try and take Race hostage!

Josh Brolin shared some thoughts about his experience playing Thanos after Thanos were ranked as “The World’s Most Popular Movie Villain”:

“Already one of the great experiences of my career. Throw back black box theatre in the lower Eastside acting. All imagination. All classical conviction. @therussobrothers whispering inspirations from “Scarface” or “Apocalypse Now” in my ear. RDJ doing Kung Fu on my hand between takes. @zoesaldana showing me pictures of her children before I threw her off a cliff. Felt like theatre days. Golden. I’m so glad people enjoyed this. Win. Win. What a ride.”

Steve: *tells Tony to do literally anything*

Tony: look, if I have to do things his way, I’m gonna do them my way

The two rich dudes with super suits (Ironman and Batman) are the dads of the superhero world in their respective universe(marvel and dc). 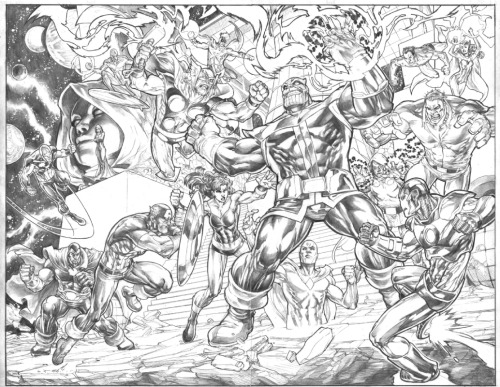 I like the please here, like I can do anything about that now. The interstellar rock collection is long gone and I, for one, couldn’t be happier.

Time passes, Tony and Peter’s relationship becomes strained, and it all comes to a head on Peter’s birthday.

@justrepostandlove as per your request :)

Carefully, Tony laid the back of his hand across the kid’s forehead.
“What’re you doin’?” The kid mumbled.
“I don’t know, they just seem to do this in the movies, so I thought I’d try.” Tony admitted.
“Huh.”
“How do you feel?”
“Sick.”
-
Peter is ill and doesn’t turn up at the workshop. Tony decides to investigate.

Unfortunately for yall, the closest book to me is my R&J script.

Come let’s away, the strangers all are gone.

The night is coming to a close, thankfully. Penny’s feet are killing her and all she wants to do is put on her pajamas and eat ice cream with her parents. She checks the clock again for the third time in the last ten minutes, the party won’t end for another hour.

“Wanna sneak upstairs?” Someone asks from Penny’s left. She turns to see her dad wearing a teasing smile.

Penny rolls her eyes, “Mom will kill you if you leave early.”

“That’s where you’re wrong,” Tony says, falling in step with Penny as she starts walking again. “If you were to say…have a migraine,” he winks at her out of the corner of his eyes, “then it would be my fatherly duty to take you upstairs and get you ready for bed, now wouldn’t it.”

Tony pretends to think for a moment, “Depends on how good your acting chops are.”

Penny looks at the floor before fixing her dad with the biggest and saddest puppy eyes she can muster, allowing tears to pool in her eyes for an added effect. “D-Dad? There’re too-too many people here and everything is so loud and my head hurts so-so much,” Penny whimpers. “Can we please go home?”

Tony narrows her eyes at her, “That’s scarily good. How many times have you used that little trick on me?” Penny shrugs. Tony looks like he is going to say something more but he is interested by a man in a stuffy business coat walking over.

“I’m afraid not,” Tony sighs as though he feels bad for this man in the slightest. “My daughter has a migraine and I need to take her home.” Before the man can say anything further, Tony wraps his arm around Penny and leads her to the elevators.

Once the doors close behind the father and daughter Penny grins over at him, lifting her hand for a high five. Tony rolls his eyes but returns the gesture.

An hour later, Tony and Penny are changed into their pajamas and are sitting on the couch with Parks and Rec playing and bowls of ice cream in front of them. Their peace is interrupted by the sharp striking of heels against the floor. Tony and Penny exchange a panicked look seconds before Pepper walks into the living room, hands on her hips.

“If you’re going to sneak away, the least you could do is let me in on your little schemes,” Pepper shakes her head.

“Next time,” Pepper agrees. “Now you better have saved some ice cream for me.”

📝: Send a number (or two) and I’ll write a drabble

A/N: 😂 nonny I love this! Thank you! I know I said drabble but I couldnt help myself with this idea. Sorry not sorry

Visiting the Avengers compound with your son was always a trip. He would bounce with excitement as his eyes blew wide with wonder.

“Hey little man!” Rhodey called out, getting to one knee when he saw you both getting to the front entrance.

“Uncle Rhodey!” Your son ran to the older man, engulfing him in a big hug.

“Hey James,” you gave him a side hug as he stood up with your son in his hands. “Where is he?”

“Where else?” He chuckled to himself. “In the lab.” He set the kid down before giving you another hug and leaving, saying something about reports.

You shook your head before walking hand in hand with your son to the elevator. The excitement in his eyes never left as he took in everything.

“Mr. Stark is currently working on his new suit so be cautious when entering.” Friday’s voice sounded. A gasp left your son’s little lips.

“What’s Friday doing here?” He whispered, attaching himself to your leg. You let out a soft laugh as you bent down to his eye level.

“Why don’t you ask papa?” You quirked an eye brow as the elevator doors opened to the humungous lab.

Rock music echoed throughout the room and it didnt take long to find Tony. He was standing at a station, holographic blueprints scattered over it.

“Papa!” Your son yelled, racing his way over to him. The music stopped and Tony looked up, giving you a smile before dropping to his knees to receive his son.

“Hey buddy!” He peppered his face in kisses, eliciting little giggles from his mini me.

“Hey you.” He stood up and planted one on your lips, causing your son cringe and push you two apart.

“Say,” he turned his attention to little boy in his arms, “Why don’t you help me out this and then we can go grab some ice cream. Yeah?” The boy nodded furiously, grinning from ear to ear.

He put him down and the kid raced over to greet the robots. Tony gave you his famous charming smile before glancing at your son, then back to you.

“Totally. Now go catch up with Nat.” He gave you a kiss on the cheek and went over to where DUM-E and your son were playing.

“Incoming call from Mr. Stark, boss.” You sighed as you mouthed a sorry to Nat.

“Honey?” His voice was strained with worry and fear.

“You what?!” You couldn’t believe it. Not even 20 minutes and he already lost him in the big lab.

“Look he’s fine. There’s nothing harmful here and besides, he’s a Stark. He’ll figure it out right?”

“Dont you dare finish that sentence.” You cut him off. “Find him Tony. Because if I go down there, no ice cream or any other fun late night activities for a year.”

“Love you too.” He sighed, before hanging up and running throughout the entire room. If there was one thing he feared in this world, it was your wrath and dammit he would never want to be caught in the middle of that.