Autism and ADHD vs. school

I will probably tell you nothing new if I say that the “normal” school system is not neurodivergent friendly. Most of us struggle a lot with different aspects and receive no to little help.

School is a mix of everything we could possibly struggle with and instead of getting help to avoid those struggles, they punish us for them. You get a bad grade for not being able to concentrate, having to fidget, not making eye contact, not liking group projects or presentations, having to ask a lot of questions, not sending work in on time, forgetting something like a book or ruler at home and even simple things like having to eat or leave the classroom for a few minutes to calm down.

I remember struggling a lot in school, especially from 5th to 10th grade. My grades were pretty okay and some were even good but I do know that I struggled a lot with the social aspect and concentrating once the teacher gave us a task.

My teachers always used to say that I was just lazy and could easily have better marks if I would just try harder. They weren’t realizing that I already tried my best and that this “being lazy” was actually due to me being neurodivergent and not having my needs met.

Back then I just thought I was lazy and even started to believe that there is something wrong with me. Especially since no one really wanted to be my friend or valued what I had to say in group discussions. I remember being frustrated and getting angry with people because I simply didn’t understand what their problem was.

My way of solving the task was always wrong, didn’t have the essential elements in it or was simply too undetailed or on another occasion then too detailed. There was never a right way to do it, no matter how hard I tried.

Realising that nothing will ever be good enough for my teachers or classmates, I started doing less and less for school. It left more time for the stuff I liked doing so it was very convenient and I didn’t really worry about it until my grades started dropping and I actually had to do the 10th grade twice.

Looking back it still amazes me how everyone ignored my neurodivergent traits and just said I was lazy and rebellious. My teachers told me that I would never make it far in life and that my attitude will backfire on me.

I was assigned female at birth so people also liked to blame it on puberty or said it came with me being trans and simply not knowing my place in life. They also said it was about me just being more boyish and wanting to impress the people in my class. If I would try to remember hard enough I could probably write ten pages about what people told me as possible reasons for my behaviour and struggles.

My favorite one will probably be that they blamed it on my parents because I have a brother who is ten times worse than me and they just thought it was due to their way of raising us. My brother actually got tested for ADHD as a child / teenager and only had traits that were influenced by him being deaf on one ear.

Since I was way easier to handle than my brother and didn’t show the stereotypical behaviour, they never even thought about getting me tested. Well and they didn’t pay attention to me a lot but thats another story.

What I am trying to say is that I learned how to mask around them pretty early and only showed visible traits once I got into 5th grade that were then always brushed off as something else. It left me with a broken self esteem, a very questionable reputation and a lot more that I now have to battle as an adult.

Back then I thought I was the problem but today I realise that its the system and the way it treats me and other neurodivergent folks.

Oh my god I’m tired of it EXPLAINING A JOKE DOESN’T MAKE IT LESS FUNNY.

#caps lock#rant#im not diagnosed so obviously i could technically be neurotypical but i also fit many many many symptoms of adhd.#probably adhd#adhd#actually adhd#mayeb lol
3 notes
dustygoldfish
Conversation
My therapist
so you haven't been focusing as well on schoolwork, let's talk about that
Me
Peri I drank an entire bottle of apple juice and a family sized box of goldfish today, can we please unpack *that*
#therapist#therapy#apple juice#goldfish#the bottle was 64 oz#i believe in apple juice supremacy#adhd#please tell me this isnt just me
0 notes
actuallyadhd
Answer 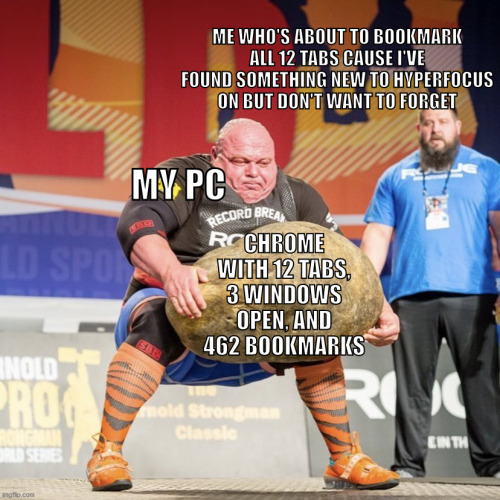 Not enough people know that ADHD is just autism-lite

Hey friends, so my BF has ADHD and has started medication for it last year. It definitely helps him focus and gives him more energy, whereas before he constantly felt exhausted, but he finds that he can also focus on negative feelings and emotions in a way he couldn’t before. For the first time he feels urgency and stress, and he hasn’t quite figured out how to let go of those emotions with his newfound ability to focus. Last semester this combination really rocked his shit. He now has a lot more tools for dealing with these things, but he still is frightened about what this next semester will bring, and how he’s going to be able to handle stress. Afraid enough to not want to take his medication, which I know is, and have told him is, a huge mistake. Because it does actually help him a lot, it’s something he needs, he just needs to figure out how to cope with having enough foresight to be worried and stressed for the first time in his life.

A necessary piece of information is when he first started his meds over the summer, he was the happiest I’ve ever seen him. He had no extra anxiety or stress. It wasn’t until he got to college in the fall (his senior year, where he needed to do his senior capstone and recital, and a bunch of social drama happened) where he felt the extra stress and anxiety.

If you have experienced something similar, and have any advice, please let me know so I can pass it on to him. For now I’ve convinced him to fill out his next prescription and if he still feels like he can’t handle it, to talk to his doctor. But if you know of any tips or tricks that helped you cope with similar experiences, or know of maybe some alternatives to medication in case he decides he won’t take it any more, please let me know.

I have ADHD so often I have to break tasks down into easy to digest steps. For example, if i have to make an appointment with my doctor, I’ll make steps like this

1. Clean up the entire house for some reason

2. Aw fuck, now it’s lunch hour and the receptionists wont be at their desks. Should I leave a message? I dont know! Play mobile games on your phone for an hour

3. Forget to call the doctor, do it tomorrow.

I haven’t seen anyone irl in weeks. Not that I’m not allowed. I don’t have covid. It’s allowed to hang out with a person. I just… don’t do it. I have trapped myself in my room for weeks on end with the excuse of safety. I need to talk to my friends. To hang out with someone. To have social contact beyond texting or calling. But now I don’t even want to call anyone. I don’t even want to ask. My mental health is spiralling down. I can’t stop crying and am questioning if this college thing is the right choice. I no longer know what to do with my future.

I feel alone, lost, and I can’t get myself to do anything. It’s still winter so I don’t even have the company of pretty flowers and warm fields of grass to run through to cheer up. Everything feels cold. Even my once so warm and alive heart. This cold winter has put out my lively flame.

A message to all of the parents who suspect they, their child or both have autism, aspergers, ADHD, etc., please don’t be ashamed because you’re not alone and don’t be too ashamed to get tested. Being different doesn’t change what it is in your heart, but knowing can spare your family a lot of hardship and it will be the greatest service you can do because now you know what to do.

Remember, a huge part of awareness is not being afraid or ashamed. God makes no mistakes and none of you are broken or weird. You’re beautiful, lovable and have so much to give this world.

it will hurt at first

i won’t lie to you

there are two types of pain

the kind that breaks you

and the kind that changes you

but i say it’s all the same

it’ll break you at first

the pieces will slowly mold together

to form something entirely new

i won’t ever control you, that’s just not who i am. you do what you want, you be who you want to be. the decisions you make when no one is controlling you are the decisions you make on your own, things you did on your own free will. controlling you won’t change the fact you want to do a certain thing, it’ll only make you want to do it in secret. so your choices will tell me everything i need to know, and at that point it’ll be your fault not mine.

I was talking with my roommate yesterday, and I casually mentioned “oh that one time I reacted really badly to noise on a trip… Yeah, that’s an autistic thing, I only just realized”

And her response was: “Oh. Do you take meds?”

And suddenly I realized… There’s so much knowledge of ADHD and autism and neurodivergentness on this site - but it’s not exactly … common knowledge amongst other people out in the real world?!!

Ever have those moments where you say you’re gonna wait until The Deadline Panic™ sets in to do stuff but the deadline is only 3 hours away and the panic still hasn’t hit so you’re sitting there, watching the minutes go by, begging your brain to give a shit, but it won’t send The Signals™ so you just c a n ’ t m o v e and it feels like you’re trying to wade through quicksand

been wearing my headphones for ten minutes without playing music and didn’t notice because I had a song stuck in my head??? was my brain just like “yeah they’re working, we’re bopping”???