Check out my newest story!

So just something you guys should know about me is that I believe in ghost and anything paranormal. I love ghost stories, I love scary movies, and I love going to haunted places. But for some reason I really want to go to Zak Bagans museum to check out everything that he has. This is going to sound dumb but I am terrified of The Dybbuk Box. Not only bc it has a Dybbuk in it but just bc of the fact if you touch it you will become cursed. I’m debating if I should go there for my birthday….. or should I not go? I need answers

by Astrologer Deepali Dubey. In the Video, @Deepaliastro Ms. Deepali Dubey will Help you to understand day Astrology as per zodiac signs.

Going to be in quarantine for 14 days. Wear a mask wash hands and stay the hell home. I haven’t tested positive but 2 people in my household have. Thanks to my friends for leaving a care package on my front door. I have the best friends. Now time to sit here listen to Amity and put my gaming desk together. Send me luck and juice 🧃

Why do ghosts only appear on one piece of property when they die?

Like??? So glad murder is on the table but trespassing isn’t, Elizabeth Margaret Brown the 17th.

Those whom have had a near death experience, often report that as their souls left their body a beautiful and bright white light appeared before them. From this light comes forth long passed relatives, angels, and grand divine figures that explain to them that it is not yet their time and they have to go back. I have had a first hand encounter with this infamous white light that houses a realm apart from our own. However, I did not have a near death experience. No, I passed through this Lighted Void as I was being born. Even at that tender stage, I was aware of how important it was that I hold on to this memory. It is engrained in my brain and has never varied; no matter how many times I have shared it.

My adventure is as followed: In the beginning I did not have a physical body. I was but a being of consciousness as I quickly rushed forward though this great Lighted Void of empty space. I did not have eyes to see but I could visualize all that was around me. There was no sound to be heard or life being lived. Since I did not have a body, there was no way for me to speak. Yet, my spirit asked, “Where am I going?”. I cannot say who or what I was asking this question to and I didn’t receive an answer.

As I continued forward the light began to fade and eventually it dissipated completely. When it was gone entirely, there I was: flesh, blood, and bone. The first person I recognized and connected to was my father. I looked around the area I was in; actually looking for where the light went off too. Of course, at this point I did not have the ability to ask if anyone else saw the light or if they experienced the same thing when they were born. I understand that this experience is not as exciting as others, since I did not speak to any Holy beings and I am not a witness to Heaven.

Despite the simplicity of my spiritual adventure; it is my most precious memory. It gave me an early confirmation that we are more than these frail, physical bodies. That there is a spirit within all of us that is awakened before our cells are formed. When I grew into adulthood, I studied the Light at the End of the Tunnel phenomena and had an overwhelming realization come over me one day. People that go into the light when they have a near death experience was a mirror to the memory of my birth. We don’t simply go through the luminescent tunnel once in this life time; we pass through it twice. It is the same mysterious portal where we come from when we are born and it is the same portal we return to when we die.

Cinco Saltos is a city in Argentina renowned for its mysterious paranormal activity. Not only is it labelled a ‘city of witches’, UFOs have also been sighted above the hustle and bustle of the South American nightlife.

Bajo Negro is the area known for being the place where witchcraft happens.

In 2009 a mysterious discovery in a cemetery complicated the picture: the intact corpse of a 8 to 12 year old girl who died in the 1930s and was chained up.

Many believe that as a result of the little light this city sees throughout the year this is an epicentre of occult activity. Was this young girl of a victim of it?

So, I’m two years old, and my mother has just moved us into this little condo she is proud to call her own.  Perfect opening for a horror movie, right?

Except, nothing happens right away. We settle in, my baby sister is born, and I preoccupy myself with coloring books and barbie dolls. Unlike a horror movie, there is no clear arc of events. I never pinpointed when the hauntings began, nor do they ever reach a peak. They simply “are”. They come in short spells, occupying little pockets of my childhood, only to fade into the background noise of growing up. As a result, I can’t remember the order in which a lot of my childhood hauntings occur, only that I was small, anywhere from 4-7 years old when it happened. In this post I will explore a little of the nighttime hauntings that I have reflected on (pun intended) throughout the years.

Take me to church
I’ll worship like a dog at the shrine of your lies
I’ll tell you my sins and you can sharpen your knife
Offer me that deathless death
Good God, let me give you my life

So fun fact/context; the inverted cross a lot of people associate with Satanism is actually the Saint Peter’s Cross. The reason it’s upside down is because, when sentenced to death, Peter thought he didn’t deserve to be crucified the same way Christ was. I don’t know I just think that sorta vibes hard with how Fee feels like she doesn’t even deserve faith, that even if she prayed it’d be an insult to Whoever listened.

Basically Fee’s got religious trauma n Holly listened to Take Me To Church a few too many times :) 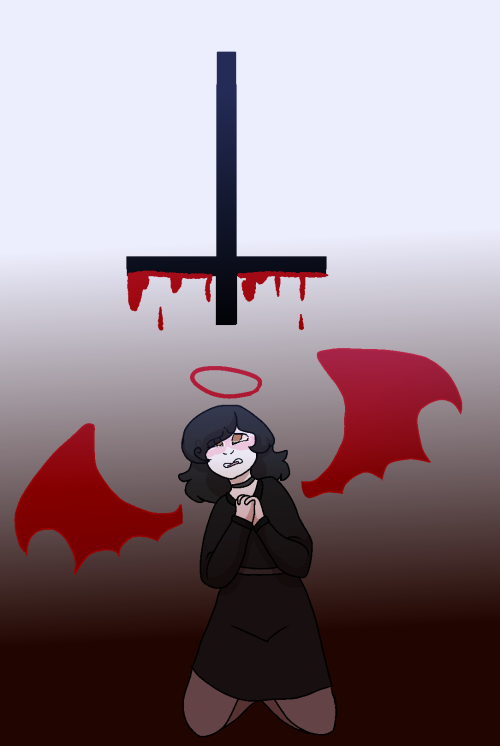 This is a great question, I was literally just talking to one today about clickbait and views.

I don’t think any YouTuber would lie and say they don’t use clickbait for views, because that what youtube is. You make a good thumbnail and title, so people who see it click it.

A lot of “paranormal YouTubers” get genuine evidence and that’s amazing. (Just like some tv shows keep genuine things in the show.) I wouldn’t doubt some of the things are staged. I know a couple of YouTubers were caught staging things, so you have to be careful. Obviously, social media in general is for entertainment. And that’s all it really is.

Like I said in my tik tok (if you saw it) yes, spirits are real, paranormal activity does happen, demons are real (but rare) but you could be investigating for hours and hours and get absolutely no evidence.

What I’m more concerned about when younger people see titles like “I almost died at (whatever location)” or “I was possessed” or something insane, they will get the wrong idea… and actually, be scared and worried for the person who is recording.

I feel like the audience, especially the younger audience should be more educated on the paranormal world, and the clickbait doesn’t help by misleading them, you know?

I’m all down for making money and sharing evidence, but I feel like there should be a disclaimer that if something feels off, the person investigating would leave before things got bad… you know?

Experienced paranormal investigators (YouTubers and people on tv shows too)  know that you should protect yourself and your energy before putting yourself into a situation that could potentially be bad.

So your favorite YouTuber isn’t going to die if they step foot in a known haunted location… Know that any title with “demon” in it is most likely clickbait. Coming in contact with an actual demon is very rare. Angry and mad spirits are different than a demon.

I know this answer is a long one, but I think it’s better to be informed than not!

Tbh I believe that some people are more prone to paranormal things; that’s why there are people who never experienced anything unnatural or there are those who experienced it multiple times

Were the dolls vintage and made from porcelain? Cause I’m super scared of those as well 😱

I said this on my tiktok and I’ll say it here, coming from a paranormal investigator every paranormal show you watch on tv is staged. Yes, some of the stuff they show on tv is real, but they stage a lot of it so they can get their views up and get money. That’s just how television works. You can go on several investigations and get absolutely nothing. I feel like these tv shows give some people false hope thinking if they go on an investigation they will see all this crazy stuff, and that’s just not the case most of the time. Keep your eyes open. Investigating the paranormal is the most cool, interesting, and fun thing ever. Talking to the other side is so rewarding, but just know that you might be disappointed if nothing happens.