So I went to therapy today for the first time in years. I was really nervous because the last person I went to didnt help me at all. They didn’t even try and they even talked to another therapist about me! They were fired and I never went back lol but THIS one was great!!! She was really nice and patient and knew the right questions to ask to get me (a person who has trouble opening up to people) to talk about some deep feelings that I don’t talk about. It felt like a weight was lifted from my chest when I let all of that stuff out. I had kept this heavy burden of feelings to myself for so long that I didn’t know how freeing it would feel to finally let them go.

Anyway the reason I wanted to make in this post is that don’t hold back your feelings. If you need to talk to someone, whether it’s a parent, friend or therapist, don’t hold back because you think you’re being a burden or that you don’t want to throw your problems/feelings at them. They want to help you, you just gotta let them.

intrusive, or unwanted thoughts thrive on resistance. dismiss them as you would rubbish in to a bin. they don’t deserve your energy. you are not your thoughts.

go on a walk if you can, listen to a podcast, do dhikr, and stay in company.

when you walk, you allow the stagnancy of you and your emotions to start moving and to find your equilibrium again.

listening to a podcast, engages the imagination and lets you feel like your a part of a conversation which might be a little bit of pseudo-socialising that you need in this covid period.

dhikr is a means of engaging your heart, mind + tongue; shifting from a negative internal dialogue to one where you are cultivating peace within yourself as well as contemplating the magnificence of your Creator. if you are anxious, i would recommend istighfaar or salawaat.

staying in company protects you from intrusive thoughts as they tend to manifest when you are alone with your thoughts.

May this be of benefit.

How to get a girlfriend in 4 easy steps.

Step 1. Meet a woman, or individual who you think may be interested in becoming a girlfriend.

It helps if you meet them at an event showcasing common interests, where you participate on equal grounds for a common or competing goal, gaining mutual respect for each other in the process.

Talk about your shared or common interests, future plans, current daily life, or things you find fascinating or just happen to randomly think of. Avoid all pick up lines, and all attempts at verbal or physical flirtation, vulgar jokes, or innuendos at this stage.

Realize that the target audience who would find this in their recommendations and proceed to read it seriously and wholeheartedly with the intention of securing a girlfriend, is not actually looking for a girlfriend. You are instead looking for a companion to engage in sexual intercourse and satisfy your personal desires. One who possess no personality characteristics of their own beyond those that which perfectly align with your own. As proof I offer the following two term definition. The first is girlfriend: a term used to describe an individual who is willing spend significant quantities of their personal time with an accompanying girlfriend or boyfriend whom they enjoy being in the company and presence of during mundane times and personal experiences, while not sacrificing any of her unique personality, goals, lifestyle, or human dignity. In essence: an equal partner. The second term is human: an individual with unique goals, ambitions, hopes, dreams, desires, likes, and dislikes, isolated in corporeal form on this spinning rock we call Earth, with the desired hope of meeting friends and companions who want the best for that individual by lending support, generosity, and kindness, while not being entitled to any such friends or companions, and having to earn such good graces with mutual reciprocation of those desired traits. In short: If you want a girlfriend for sexual reasons or because you think it will be like you’ve seen in movies… then you don’t want a girlfriend!

Frankly, that sounds like my idea of heaven. If it’s your idea of hell, then keep out. 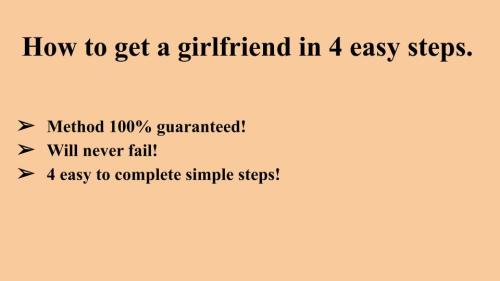 I literally can’t fucking do this anymore :’)

Ways to Give Your Mind A Break (part 2)

Welcome back to my list of ways to give your mind a break! To finish, I decided to include tips from my family and what they do when they want to take a break! Let’s get into it:

My dad plays many instruments, and he spends time every day playing on either his saxophone or the piano! He taught me to play piano, so I also do this sometimes!…

Love and passion are batteries. So are spite and anger. No one cares what brand batteries you use, just what you do with them.

every time I think I’ve reached the highest level of peace,
I discover a new layer to it.
often unlocked by a new layer of pain.

do not fear what hurts you.
- renuka i.

there is a gift at the end of it.

Your reminder not to ever ask a man out

I have a very good friend (25M). He was asked out a few weeks ago by an apparently lovely woman (I have met her a few times) of his age. He declined. That’s perfectly natural. But I asked him why did he decline? He explained that he enjoys “the chase”. He proceeded to tell me that he only gets excited to go on a date with a woman when he initiates it. He also said that this woman was acting desperate, that was a turn off for him.

The woman he asked out who rejected him? He thinks highly of her and he is very protective of her. He would do anything for her even after she rejected him.

Nothing we didn’t know before, because after all we follow Female Dating Strategy ladies. But this poor woman getting rejected after weeks of asking and will never know why. She will probably go on and repeat this mistake.

This is a good example that Female Dating Strategy & Hypergamy works and we should not deviate from the rules. Even if modern society insists that it’s okay to ask a guy out, it is not. I have heard the other side’s perception of this practice and it’s never favorable.

hi nonny!! :) thank you so much for trusting me to reach out!

sadly I’m straight so I can’t relate to you there, but I can deff relate to not knowing what you want to do with your life!! I only recently kinda figured out a next step for my career, and even that is just like a 3 year plan, no idea what I’m doing after those 3 years haha but don’t fret!! we’re still so young, even tho it feels like there’s a ton of pressure to have it all figured out, you don’t have to!! so many mega successful people didn’t get their start until way later, we have so much time!! just try to think of something to do now that gets you a bit of money and you can think of ideas and go from there! or try applying to school programs or jobs that interest you, you never know until you try!

and for the asexual thing, you don’t have to tell anyone if you don’t want to! unless your friends/family are randomly asking you about your sex life, it wouldn’t come up, and even if they do ask you, you can just kinda gloss over it, or make a joke, or say you don’t want to talk about it! or if you’re comfy, try coming out to one person and see how it goes and go from there! you don’t owe anybody anything, especially if it doesn’t affect them! just focus on coming to terms with who you are and what makes you happy and your real loved ones will support you if/when you decide to tell them!! xoxo

#I hope that helps!! hope the advice I give you guys is okay haha#it means so much that you ask me for it!! <33#wishing you all the best nonny#advice#anon#answered
0 notes
elizayrnvegete
Link
Get Laid Tonight
https://tmblr.co/mgONNXwqDf-ejL4aFNh6frw
#uomo#monster lady#es#fantastic#penertration#one#patricia#aletta#armpit#advice
4 notes
nightkitchentarot
Quote
<div> —  Arnold Mindell </div><span>To work with the unknown, some combination of respect, ruthlessness, courage, and cuddling is necessary.</span>
#inspirational quotes#words of wisdom#advice#arnold mindell
0 notes
elkatheinkstained
Text

In these trying times, I’ve been doing one thing for myself recently for comfort.

Now, I know people with anxiety like myself rewatch shows because it’s comforting to know everything that’s going to happen, but one can only re-watch Hunter x Hunter, JoJos and RuPaul so many times before it starts to not be a comfort, but a chore.

So what I’ve been doing instead is rewatching shows I only remember vaguely from my childhood, that I know I watched but at an age way too young to remember. Some of these shows, I’m still way younger than the target demographic (Murder, She Wrote). Some of them, I’m way, way older than the target audience (Theodore Tugboat, Metabots, Rupert). But I remember enough to know that what I’m going to see isn’t going to hurt me, and I remember little enough for it to still be fresh and exciting, and take me back to a time before all this, when I was still innocent, when the world I saw on TV was beautiful and bright.

So, if you’re feeling the squeeze, I suggest this coping strategy. So far, it’s really working well.

I feel that sometimes! I’m not a fan of harry’s public image at all this year, and it’s been rough in this past too, and I also think how het!louis treats women isn’t great either, but I just remember that that’s not who they are! sexual orientation aside, a lot of celebrities have public personas that don’t match who they are, since it’s easier to see someone not like your image rather than to see someone not like you you genuinely are!

take a step back if you want, focus on louis or whoever else, or just focus on larry without looking into harry’s public image too much, just do whatever makes you happiest!! not bad at all to change your interests or feelings over time!

don’t worry, i got ya

as a general rule, peeing after any kind of touching down there is usually a good idea. the concern is that the urethra will get blocked by bactieria from you (or your partner) and that could cause uti’s and infections.

Don’t do art, stay in school.

Love is real and love is why we’re on this earth!!! Humans were made to connect! I’m so happy for you and your partner!!!! What a bright spot of joy and happiness during a time of turmoil, thank you so much for sharing with me <3