watching warmth at length
come back to my hands
after washing them
in cold water
inviting length
to be a measure of both
comfort and discomfort
asking time
out of the corner of my eyes
can water be truly still?

i’m fallling out of love and you have no idea. or maybe i’m wrong and you do know, you just don’t care enough to do anything about it.

I go back to December every night. I go back to the conversation we had on New Year’s Eve and instead of going to the party I go to you instead. I knock on you door, swallow my pride and tell you right then and there that I love you.

My mind races back to that night in December when I just held you, ran my hands through your hair and just stayed in the moment with you.

I go back because I just want to come home. I just want to stay there with you and tell you I’m sorry I pushed you away so much. I realize how much you mean to me and want nothing more than to play with your palm in my hands.

Let’s just go back together. I promise, I will get it right this time.

#letters, #scrambled thoughts, #thoughts and things, #a letter i'll never send, #thoughts, #i hope this reaches him, #i think i might love you, #letter, #i am losing hope, #my brain is scrambled, #i am so tired, #tell me what to do, #to you, #text, #written, #words, #writing, #creative writing, #thoughts about you, #i hope youre okay, #letters of love, #loving, #love letters, #love letter, #love, #i keep thinking maybe you'll choose me, #l love him, #letters to my love, #but you never do, #love note
0 notes · See All
melwrotethatText

hello all! i’m looking for new writeblrs to follow as i’m going to be unfollowing inactive blogs. here’s what i love:

if you post any of these and/or make your own original content please reblog this and i’ll check your blog out! ty!!

I fear the freedom my heart desires.

Much like the winds that fill my sails, freedom is a terrible force moving

under no command of my own.

but in my mind, because

I dared to call them by name.

“I don’t know why we had to drift off in two opposite directions. You on one course and I on another. It’s clear as the tears that fill this bottomless depth that was once us, has sank and been claimed by the abyss. How will I navigate my way when I have no sun above me or stars to show me the way. I will miss you terribly and long to see you once again. I wish you a safe journey. May you reach your destination soundly and peacefully. Please remember me for out there on the currents is a castaway that will never forget you.” 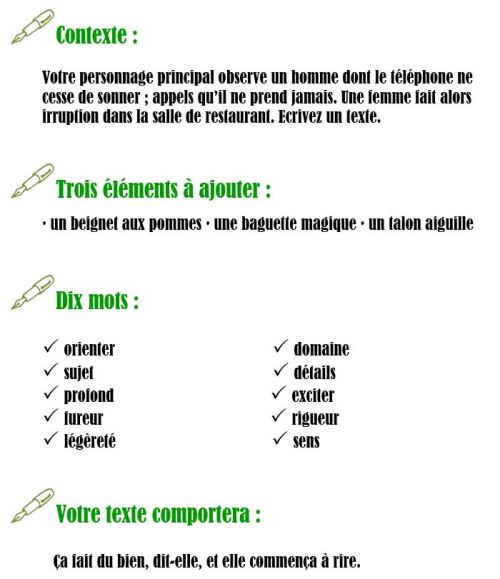 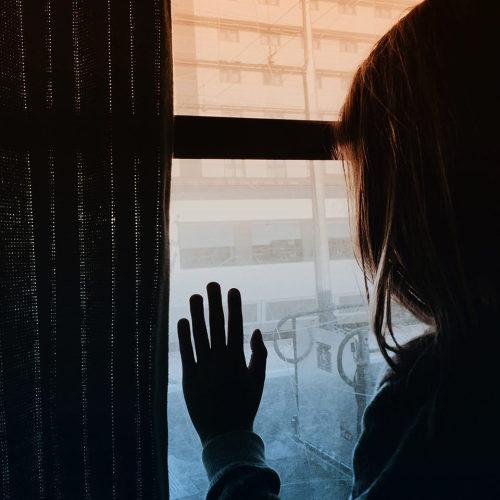 Sometimes, when you’re dealing with a stubborn bout of Writer’s Block / Artist’s Block, a creative writing / creating thinking exercise can oil the gears and get you back on track.

Here’s a fun little idea that can help put steam back in your engine:

By some random twist of fate, you are now in charge of [real corporation], and now have free reign to dictate how they conduct business – even retroactively rewrite their history if you want. What products do you have them make? Which ones do you have them discontinue? What would you alter about existing products?

There are no rules here; go and play god with the company’s assets.

If you need some examples to get you started, consider how you’d run Netflix, YouTube, Disney, Valve, Tumblr, Bethesda, Amazon, or Marvel Comics.

It’s not fair that at age 14 I was writing stuff like, “Oh my midnight ocean, I’m desperate to drown in your eyes of tidal waves.”

Now I be taking college writing classes, looking at the floor for 30 minutes, and writing shit like, “Oddles of noodles gonna get me spahootled, my dudel.”

Is my chest tight?
Do I feel hot?
I don’t feel right
Like I’m not gonna make it

I’ve tried to go to sleep
But these worries can’t be shaken
Will Covid-19
Be the reason why my life was taken? 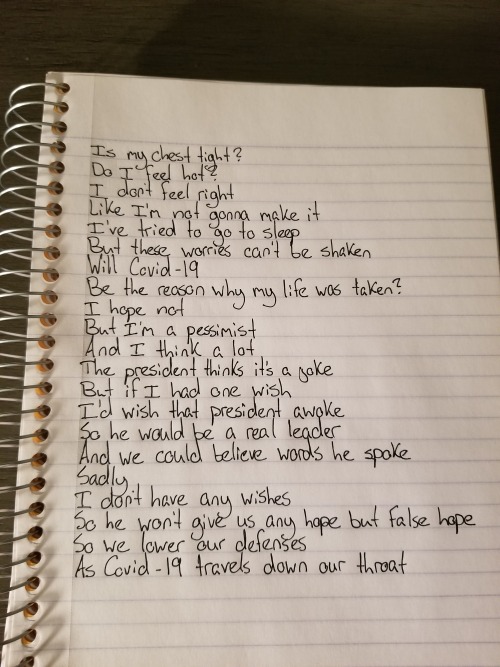 So for those of you who aren’t aware, I’m an avid roleplayer. So much so that I’m currently writing my own tabletop rpg which I plan on publishing within the next year. I actually got into roleplaying because of my dad. He’s an amazing storyteller and is great at world building.

Well, recently we started a new campaign in a new world he created and, as usual, I had my heart set on playing my goblin berserker since she’s one of my favorites. Turns out, he didn’t have that race set up yet, so I had the chance to write, in detail, what I thought the goblin race should be like in that world.

Long story short, it’s nice and flushed out now as a playable race in his campaign! But I decided that it would be fun to share the key elements of the goblins little by little on here too, so that any other roleplayers could use this version of the race if they want to.

Of course, I picture the goblins as cute, wild children with skin of varying shades of green, but I also see them as simple folk who live alongside the trees and the earth and all it’s creatures. And it’s in their simplicity that their wisdom can be found!

For today, I thought it would be fun to start with the goblin pantheon since it fits with my tumblr name! I’ll flush out more of the race details on other posts tomorrow. So without further ado, here’s the pantheon I came up with.

Brol, god of bodies of water

Kruig, god of the dead

The kingdom of Aetier has oft been called as the last vestige of Raia’s once-great empire, the kingdom itself having avoided or overcame the countless civil wars, rebellions, and invasions that its sister nations have succumbed to. Though not the most militaristic kingdom in the continent, it stands above the rest as one of the richest nations in the world, owing much of its wealth from its strategic acquisition of the Drecruria Strait, and with it the main route of the Valurian Paths.

Aetier is also blessed with a myriad of natural ports on both its southern and eastern fronts, with the Drecruria Strait being advantageous in accessing key maritime trade routes.  Its temperate Mediterranean climate allows for long growing seasons and short winters, with the exception of those that live along Aetier’s northern border.

Vindercrest is the capital city of Aetier, straddling both halves of the Drecuria Strait and acts as a gate that separates the East from the West. It’s locations as the intersection between both land and maritime trade makes it one of the richest cities in the known world, and thus, the most sought after treasure. The city is protected from naval attacks through the combined efforts of its natural cliffs, large seawalls, and the Twin Gates that guard its northern and southern entrances.

The red shingles atop many of Vindercrest’s buildings earned it the nickname “The Vermillion City.” Though for merchants and tourists alike, it is best to view the city from a high perch during sunset, where one may watch the sun sink into the horizon, burning the city vermillion and gold.

Congratulations to the winners of the Prompt (?) / Hacked Prompt / Contest of Champions!!! 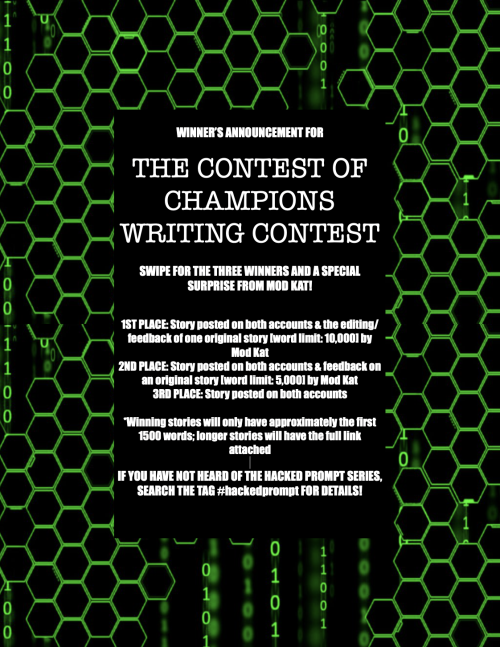 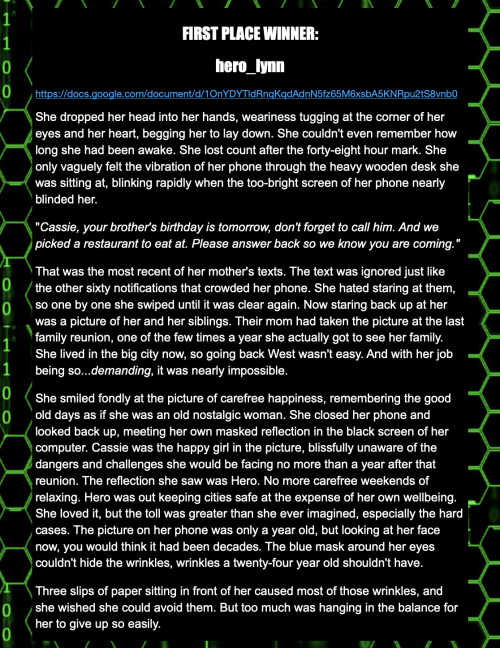 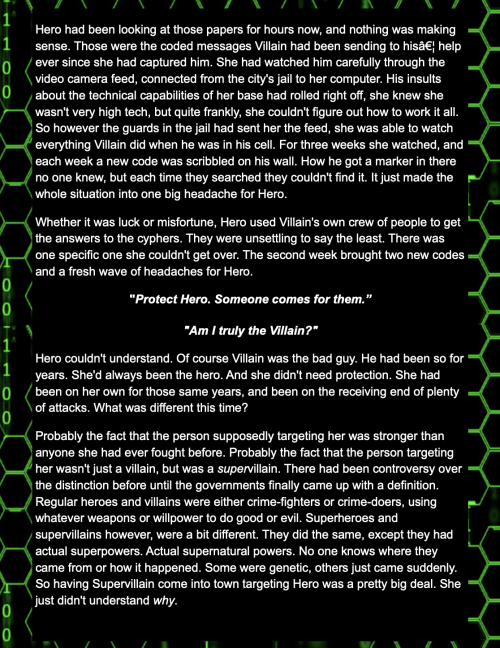 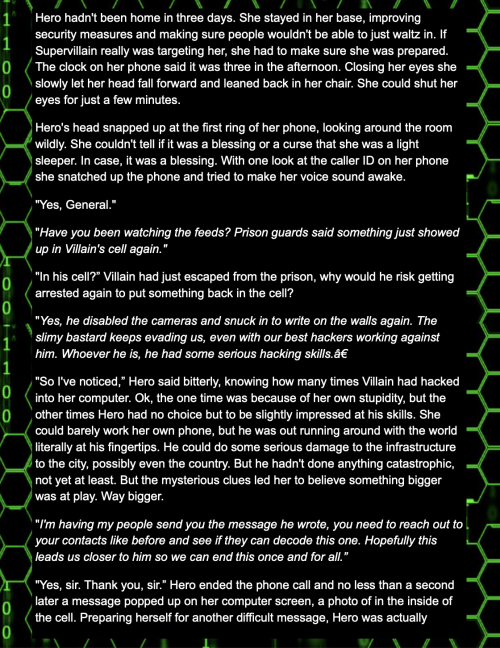 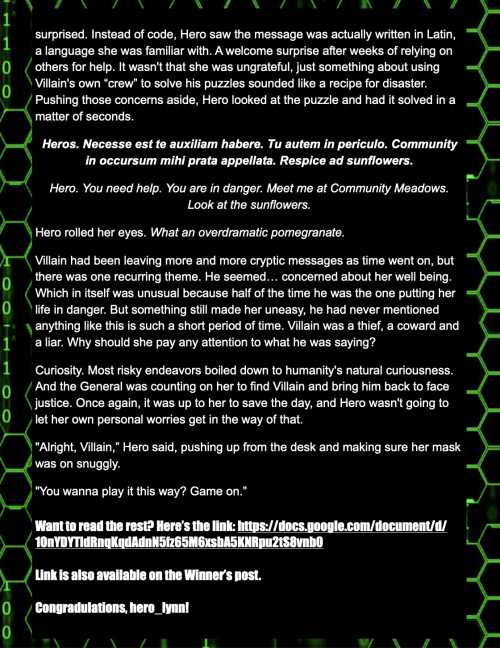 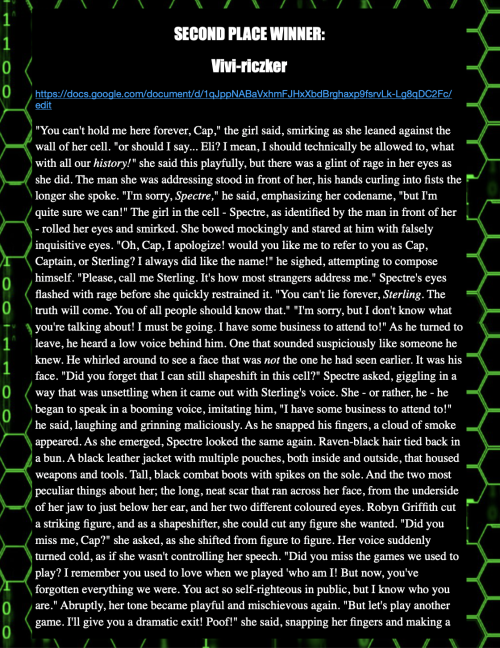 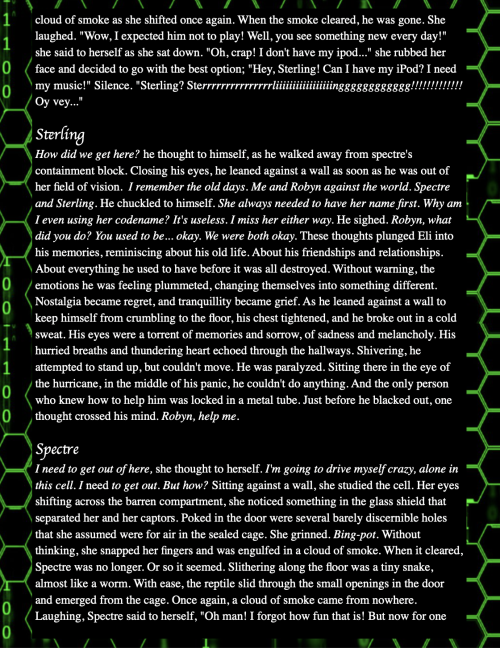 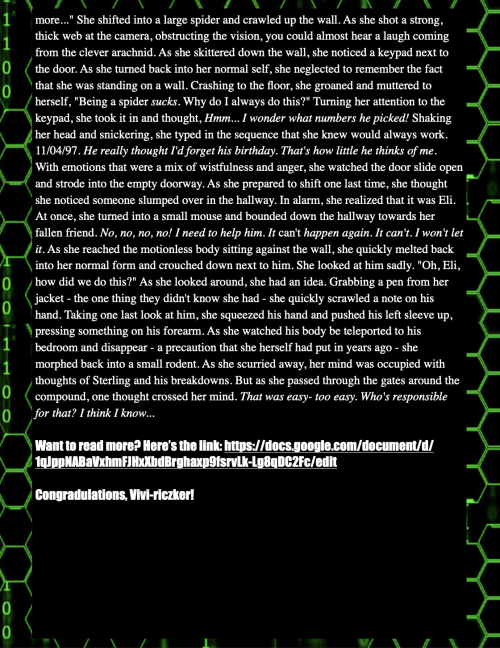 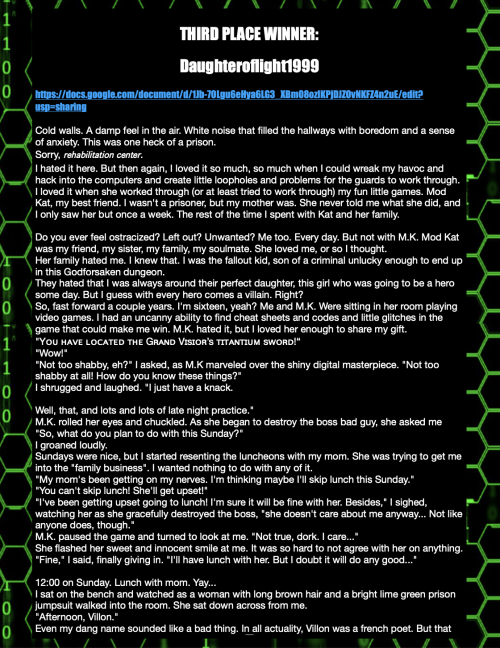 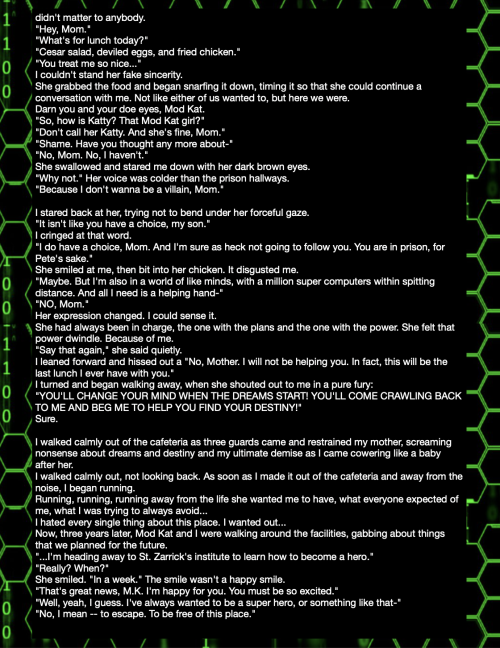 “I- okay, fair point, but that still doesn’t excuse THIS!”

No one expected the masquerade to become a massacre. No one but two: the only survivor, and the killer.

I find myself alone