I was talking to a friend about the new Avatar Studio and realized just how important this could be.

The last episode of LOK aired in December 2014.  And with it, Korrasami became canon. I remember the joy of seeing two women in an implied relationship for just a few seconds.  And now a few years later we can watch entire shows about queer people.  I’ve forgotten what it was like to not have this level of representation that we have today, but in my mind, Legend of Korra was the start of this shift.

That story was continued in comics and books, but hasn’t been able to take advantage of the shift that followed that airing in its original medium.  And now we have an opportunity for that.  I don’t know whose stories we will see, I don’t know if Nick will actually treat these creators with respect this time around, but whatever happens I know it’s going to feel like home.  It’s going to be the stories and world that I love, with representation that makes me feel seen.

I only hope we get high quality Avatar content from Avatar Studios. I’m kind of hyped.

I want more Avatar: The Last Airbender and The Legend of Korra content more than anything. And it would be awesome if they could turn into a series or movies the Kyoshi novels. I honestly would love to know more of Kuruk, Yangchen, and Szeto. Let’s explore past Avatars. For the love of Raava though, don’t go creating a new Avatar just yet…

Above all else I want more The Legend of Korra content. And yes, judge me all you want but I want Korrasami content the most. The whole TLOK has still a lot to offer (ATLA too) and I’m not ready to get into a new show where Korrasami is possibly gone and I haven’t seen their life on display.

Series: Part 27 of My Works

Project for a korrasami book part 2 with colours. 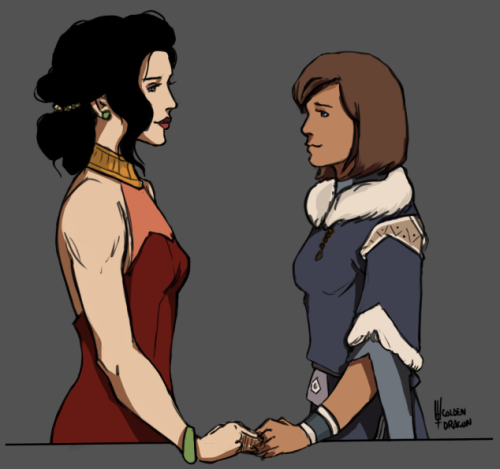 if we don’t get a korrasami kiss in the new avatar series or whatever it is that they’re making, i don’t want it🙄✋🏻

What The Cat Dragged In
by ThatOneGuy56

Series: Part 27 of My Works

Asami nearly choked on an expensive glass of champagne when her girlfriend took of her coat and revealed her new dress. Korra has always been into more practical clothes, and with a few exceptions of her water tribe dresses, she never wore them.

But she evidently broke that streak with her new blue dress that didn’t even try to hide her breasts. Two strips of material covered her nipples and most of her bosom, but leaving cuts to the side and in the middle that revealed exactly what the rest of material was hiding.

Korra saw the widened eyes of her girlfriend and slowly walked towards her, watching as her eyes move from side to side. As Korra got closer, Asami saw the details on the dress and how the strips joined around her neck  with just one ornamental button. She was one flicker of her finger away from disrobing herself right here and now…

But instead, she asked her to dance and let Asami hide her reddened face against her bosom, which didn’t exactly help her condition, but allowed her to sneak a few kisses to her exposed skin.

Okay so I obviously have so much work to do, so what I’m gonna do is rate ships from tLOK, feel free to add your opinion or comment on mine!

I call this “The many faces of Asami Sato”.

After Korra Asami and Nova help Bolin out of a jam he tries to think of a way to repay them. Nova helps.

I really need a good Korrasami fanfiction right now. Does anyone have any suggestions?

-We hate her because she is arrogant - Just Like Toph right? She is pretty arrogant and you guys love her

-The characters in TLOK are to overpowered, they convenient discover new abilities - Just like how convenient it was for Toph, the new gaang member, be the one who invented metal bending? And how convenient was that Katara was able to bloodbend, a ability she have just discovered, the woman who pretty much mastered and spend most of her life developing and using this skill

-The Legend of Korra is terrible, to many god ex machina moments- Because that Lion Turtle convenient appearing just in time to give Aang the answer he was looking for since book1 and the power to do what he wanted since he had no intention to kill Ozai. Oh and how convenient it was that Aang hit his back scar in that pointed rock just in time to enter in Avatar State, and how dafuck that was able to restore his chakras?

Hate The Legend of Korra is hate The Last Airbender because even being two very different shows, they share so much, they mirrors and complete each other.

That’s why 90% of the haters are straight males, because the truth about why they hate her show and her character is way more simple : They hate Korra because she is a lgbt poc woman who doesn’t take any crap from any men.

Re: The expansion of the Avatar franchise -

Wouldn’t it be the best thing ever if thanks to Korra’s subtle ending, SheRa could get the ending it did, but now thanks to how popular SheRa’s ending was, future stories of Korra would be completely explicit, Korrasami wise?

Whenever Asami is stressed out and can’t fall asleep because of it, Korra strokes her hair to make her feel safe and relaxed.

Korra: There are no snacks left in the kitchen.

Asami: I am literally right here.

Korra: I said in the kitchen. Not in the bedroom.

Me, hearing about Avatar Studios and hoping to get more korrasami and an animated version of the Kyoshi books + rangshi:

You and Jennifer, a multicartoon MEP