I’m really invested in this show, and I’m highly anticipating the next season. 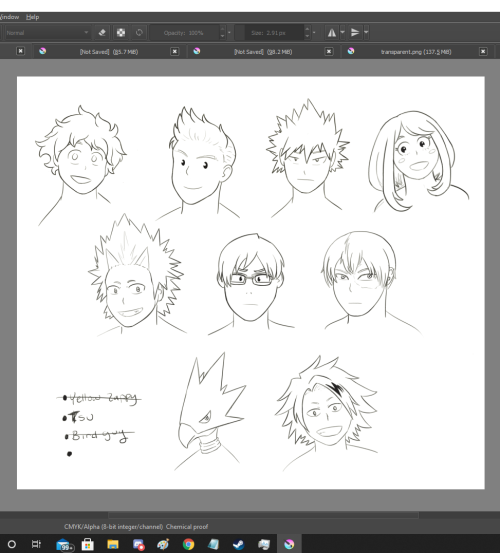 All mha girls shall be protected qwq 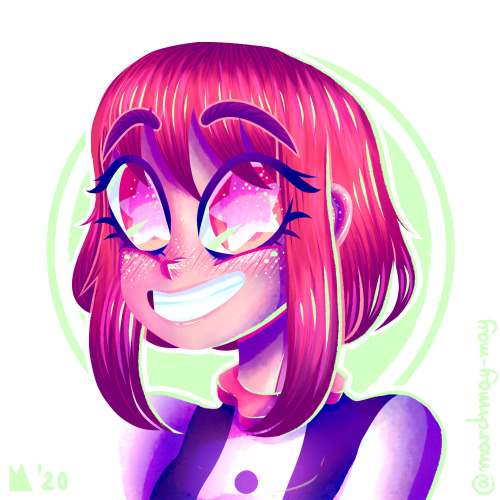 Hey, I know I main bad edits and jokes on this account, but just a reminder that you are great! And I mean it. A lot of times it might be easy to forget how amazing we are as humans. It can often times be drowned out by all the bad news and drama we see everywhere, especially on social media where fights and negativity can break out daily. But I just wanted to remind you that you’re awesome for living another day! If you want to fall in love with fictional characters or make whipped coffee or buy a hydro flask to help save the turtles then do it! I cannot stress this enough, but don’t let meaningless names and opinions cloud the desires that you have that make you happy. We’re all just trying to survive and make this life a little bit better for others and ourselves. I love you, and I hope you have a wonderful night. ❤️

Yasss, I can totally see Uraraka just teaming up with Shinsou to make others lose their minds and shit their pants xD great idea xD

why do people hate kacchako so much? it’s just one ship and bakugo has proven he doesn’t completely despise uraraka like deku or tododroki. i just wanna know why everyone hates it so much.

Uraraka: For the 16th time, no, I don’t think you’re obsessive.

#bnha, #shouto, #uraraka, #yats my tag for her i think, #sorry bout the cat one btw. well no actually i like it its odd looking
0 notes · See All
saj9Text

People waiting for Katsuki Bakugou to get a quirk awakening or evolution so that he can keep on being a rival to Izuku. Meanwhile, me asking for a quirk evolution for Ochako. I mean, Gravity manipulation would be so awesome. She would be able to do so many things that she isn’t able to do now.

#ochako needs more love but bakuhoe takes it away, #ochako, #uraraka, #gravity manipulation would be so awesome, #please horikoshi, #she needs an upgrade
9 notes · See All
taterdrawsPhoto

several drawings in one day? unheard of. 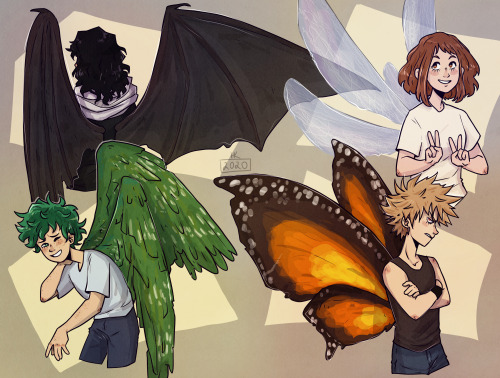 Camila covered her ears as the classroom erupted into sudden yells and shouts.

“I want to be the class rep! Pick me!”  Kirishima yelled as he stood up from his desk, putting his hand in the air, leaning over it.

“Me too!” Denki said as he raised his hand, followed by Jiro.

“It’s a job made for m- I’ll be the leader!” Aoyama began to say before he was interrupted by Mina

Camila’s eyes widened as even Bakugou put his hand in the air shouting; “LET ME DO IT! ME!”. She felt the expression of confusion make its way across her face as she watched the class all eagerly volunteer to become the class representative. She looked over at Kirishima before whispering; “Um, is it really that big of a deal to become the class rep?” she asked in a small voice to which he replied with vigorous nodding. “It’s the manliest way to show people that you can be a top hero leading groups! We need all the experience we can get!”  he explained, still waving his hand in the air. “Ahhh” Cami replied, now realising why the class was so eager? “You are not interested?” Kirishima suddenly asked. She was about to reply but was interrupted by Bakugou in front of her saying; “How could she? She wouldn’t stand a chance against me, not will be skilled enough to do the damn job”. She left out an irritated sigh before rolling her eyes. “For your information, I am not interested because the truth is that I am kinda lazy. Being class rep sounds like way too much work,” she said shrugging her shoulders. ‘And I have enough in my life to deal with already’ she thought to herself, adding a mental laugh at the end of it.

A small shriek left Camilia as Iida’s voice boomed throughout the classroom. “Geez dude!” she exclaimed in her American voice, hand over her chest. “There was no need to scare the living Jesus out of me” she sighed out, collapsing back in her seat as a few members of the class laughed at her reaction. “But damn, if you all want to do it, why not take a class vote,” she said scratching the back of her head. “Plus, I am getting kinda hungry” she admitted as she felt the hunger pan hit her. “THAT WAS EXACTLY WHAT I WAS GOING TO SUGGEST TAMAKO!”. After a few more minutes of discussion, it was confirmed that a vote was going to take place.

As she wrote down her suggestion, she suddenly looked up and around the class, not hearing from Aizawa for a while. Once she spotted him, she felt herself sweatdrop as she saw him sleeping in the corner. “I mean, I am surprised he is able to get sleep in this noise” she whispered to herself as she threw her paper into the collection box that was being passed around. She couldn’t help but feel a tinge of disappointment when she heard Midoriya’s name was announced. She had nothing against the guy, but he did seem slightly chickenhearted when it came to things. 'Iida was the only person that was able to get the class to calm down’ she thought as she clapped for the selected leaders of the class.

She sighed out of relief as the lunch bell finally rung. As she began packing up her bags, Mina and Denki had walked up to her table. “Hey, Cami! Do you want to eat lunch with us?” she asked eagerly. Camila looked over to Ochako, knowing that she had asked first but smiled when she gave her a thumbs-up sign. “We can walk home together and grab a snack then!” Uraraka said to which Cami agreed to.

Walking into the cafeteria immediately summoned the beast that was currently taking control of her stomach. “Woah, down little miss” Denki joked, causing him to receive a small punch on his right arm. “It’s not my fault! my quirk requires me to eat loads so I get hungry super quickly” she said in a defensive manner as they all got into the line. Kirishima and Bakugou were also with them since Kirishima was becoming good friends with Denki and had forced bakugou to come along. “Wait, seriously? What exactly is your quirk then?” Toru asked curiously, shuffling forward as she did so.

Camila blinked as she soon realised that she had told no one whether quirk was, and didn’t really understand how her quirk work. “Um, so, I guess I would call it candy manipulation?” she said, the clear nervousness evident in her voice. “What kind of st-He’s supposed to say how does it work?”  Kirishima asked, blocking what Bakugou was going to say. 'Ah fuck’ Camilia thought as she realised there was no escaping this. 'Well, uh, I guess the basics of it is that I can make different types of candies? So like, if I put my hand out, and think of, like, a really large marshmallow then..“ she explained as she put her hand out and closed her eyes. 'Please work, please work, please work!” she mentally prayed to herself, but suddenly opened her eyes as she felt a soft substance in her palm. 'Okay, it actually worked. I’m going to have to ask Aizawa for help with this’ she thought before realising the attention was on her. “So, Ta-da?” she said as she held the marshmallow up. “Anyone want a bite?” she joked awkwardly.

What she wasn’t expecting was for Denki to lean over and grab the whole thing with his mouth. Her cheeks heated up instantly at the close proximity as she quickly responded. “Hey! I didn’t mean seriously to eat out of my hand!?!” she said shaking her arms at him. “Couldn’t help it. It looked as good as it tastes. but seriously, that’s a really cool quirk!” he said with his mouthful. “Wow, thanks for the messy compliment” she laughed wiping a piece of marshmallow of her. “Ignore him, boys are dumb. But that is a super cool quirk! No wonder you got into U.A. through recommendations. You must be super versatile!” Mina said. “Ahh, I can’t help but be jealous” she then whined out. “Stop, your praising me too m-” Camilia was interrupted in her sentence as the alarm went off. Within seconds, students around them began rushing and running in different directions.

Unable to process what was happening, Camilia was soon dragged away from her friends and into the crowds. “HEY WHAT’S GOING ON?!” She tried to shout but was easily muffled by the older students in the crowd. She felt herself be pulled and pushed in every direction, unable to find her own two feet. She let out a yelp when she felt someone tug on her hair and pull her backwards. She was about to scream but was quickly stopped as a hand covered her mouth. Looking up annoyed, her glare instantly softened as she met eyes with Bakugou. “You fucking dumbass. How do you expect to be a hero if you let yourself be pushed around that easily? Just stay behind me, I’ll show you how it’s done”. She wasn’t for his insult, but in this situation, she could do nothing but comply. Allowing him to drag her behind, she instantly grabbed hold of his jumper as he bulldozed his way through the crowds. “THAT’S RIGHT, MOVE IT EXTRAS” he yelled, seeming to enjoy this a little too much.

Luckily, the crowds were soon brought to a halt and Iida managed to get on top of a fire exit sign and explain the situation. Despite the seriousness of the situation, Camila couldn’t help but laugh. “What’s so fucking funny? AND LET GO OF ME ALREADY YOU CAN WALK NOW” he growled at her in which she instantly let go of his shirt, covering her mouth. “S-sorry, he just looked way too funny up there” she spluttered out, reimagining the scene in her head. however, she soon calmed down and let out an awkward cough as she regained her posture.

“But seriously? Thanks Bakugou”

He had already begun walking away but still said; “Whatever’. However, noone seemed to notice the light blush on his cheeks.

My Madoka (and Uraraka) figure collection!

like/reblog if you save! credit appreciated but not required ˑ༄ؘ

Have an Uraraka gif I made for a friend on my new phone last night!