summary: even the prettiest faces have their scars, and sometimes the tears make it worst. but this time, the tears transformed into a kiss.

a/n: pansy deserved better and you can’t change my opinion.

Pansy Parkinson. A name known by the whole Hogwarts, worn by a black haired, quite short and most importantly, pureblood witch. Whether her name was said by a silly boy who couldn’t have her or an angry girl who couldn’t be her, Pansy continued to be the young ladylike girl her mother taught her to be. She would always smile with superiority and talk like she was better than anyone else because, in fact, she really was. She was from a wealthy and respected family, she was friend with a lot of students from families with connections and she had a thing going on with Draco Malfoy – they were the perfect pair for any Slytherin: both of them very beautiful, strong and – again – purebloods.

You, on the other hand, were a simple student – muggleborn, known by your housemates and a few other students you were friends with. The only thing you had in common with Pansy were some classes where you two were forced to stay in the same room. You didn’t really have a problem with Pansy, you just wanted to avoid her so you could also avoid her mean comments or the looks her friends would give you. She didn’t know you – not even your name – but that didn’t make her stop from making fun of you.

You filthy mudblood.
Why are you looking like that? Imagining you’re one of us?
I guess they don’t have decent clothes in the muggle world.

And the list could go on forever. Sometimes her words were affecting you, especially because of her the jokes about you came to life. Her friends weren’t so harsh – Draco would totally ignore you, being too busy with bullying Harry and his friends, and dear Merlin, Blaise sat besides you in Charms and he didn’t say a word; he even asked nicely for a quill and returned it at the end of the class – but as soon as she made a comment about your presence, they all started. You really wanted to ignore her, but from time to time you would find yourself crying until you would fall asleep because of her words. You did nothing to her.

matching icons/headers of the phelps twins !! <3

like/rblg if you use or save pls

Other People: Harmione is endgame. Romione is forced. They don’t have chemistry etc.

Me after Romione literally just stood together in PoA: OMG THEY ARE SO CUTE THEY SHOULD BE TOGETHER IF THEY DON’T END UP TOGETHER I AM GOING TO SUE ROWLING.

The bathroom door opened, Ron springing to his feet as Hermione emerged.

“Well?” he asked, trying not to sound as hopeful as he did all those times before.

Hermione held out her hand, revealing the small plastic stick to Ron. There was a single faint line on it - a sight they were used to seeing by now.

“Nothing yet.” Hermione sighed, sitting down on their bed and tossing it in the garbage. Ron came behind her, rubbing her shoulders and kissing her on the cheek.

“No!” she snapped, her eyes beginning to water. Hermione turned around, burying her face in Ron’s shoulder. He held her tightly, stroking her hair as she sobbed.

They’d been trying to get pregnant for over two years now; and it impacted Hermione worse than anyone else. They were able to conceive once early on.

Hermione was only able to hold onto her for a few months. Ron always liked to listen to her heartbeat; always weak inside Hermione, but still there. Until one day it just… stopped.

Hermione didn’t eat or sleep for weeks after that.

It took a while before they started trying again. Hermione went to the Muggle doctors, healers, tried every method they heard about, read books on getting pregnant, took all sorts of vitamins, and made a schedule to see when Hermione was ovulating.

The first time, it seemed, was a fluke.

Hermione used her sleeve to wipe her eyes, still crying, but Ron was able to calm her down just a little bit.

“It’ll be fine, ‘Mione.” he said, angling himself so she wouldn’t have to look at the negative tests.

Hermione looked up at him, leaning forward and pressing their lips together. Hers were still quivering, the tears in her eyes rolling down her cheeks and coming onto Ron’s.

She placed her hands on his chest, pushing him back onto the bed and unbuttoning his shirt. Ron grabbed her by the wrists, stopping her.

Hermione cut Ron off by kissing him again, now fiddling with his jeans. She’d stopped crying, apparently distracted enough for the time being.

Ron wrapped an arm around her waist, picking her up and placing her underneath him. Ron began to pull off the rest of his shirt as Hermione removed her own clothes, neither one speaking to the other.

Naked, her crawled towards her, setting himself between her legs, Hermione leaned up, grabbing him by the chin before he could start.

Ron positioned himself on top of her, the bed shifting under them. He grabbed Hermione by the hips, pulling her against him.

“Oh, fuck, Ron, just like that!” Hermione moaned as Ron pounded into her. She threw her head back, running her hands up and down his torso.

Ron grabbed Hermione by the neck, lifting her up to look at him.

“We’re gonna make a baby.” he grunted, feeling the pressure build up. Ron increased him pace, watching himself thrust in and out of her. “I’m gonna make you a mum.”

Hermione moaned again, wrapping her legs around his waist.

Ron pushed himself in as deep as he could go, and stopped moving as he finished inside of her.

Neither of them moved for ages; they wanted to make sure they got the job done. Ron hesitated, but pulled out of Hermione.

It didn’t feel any different than last time. There was no reason it should have been, but every time they had sex, he hoped he’d gotten her pregnant.

Ron reached over to his bedside table, grabbing his wand and pointing it has Hermione’s stomach.

“What are you doing?” she asked, refusing to stop lying flat on her back.

“It’s quicker this way.” Ron waited for her nod of approval, then muttered the spell under his breath. Seconds later, Hermione’s stomach was glowing the colour of roses.

A/N: Hello lovelies, so this is basically every H.P fic I’ve ever written so… enjoy!

The strange girl in Hogsmeade

Christmas with the marauders

Love you too much

Also, for any imagine with any character that you’d like to request, you can ask it on or off anon.

And you can use this prompt list for requesting an imagine: (xxxx)

Mcgonagall: Potter, Are you serious?

Mcgonagall: I- *remembers every time james made the same joke*

Mcgonagall: I- *walks away*

Harry: Am I still in trouble-

Ron: I haven’t a bloody clue.

Dracoron magicians of my Heart 💜

I think one of the differences between Draco and Ron is that Draco never made Hermione cry. 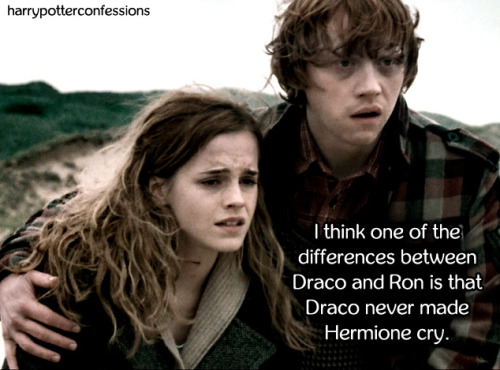 I have found this amazing fanfiction

Giving Up Control - Hildigunnur - Harry Potter - J. K. Rowling [Archive of Our Own]
An Archive of Our Own, a project of the Organization for Transformative Works
archiveofourown.org
#romione au#romione#romione fanfic#harry potter#ron weasley#hermione granger#ron x hermione
2 notes
smallpumpkinboi
Text

Au headcanon where Ron is a squib and Hermione is a muggle?

so had a couple thoughts about it- here are the random bits- i definitely could have explored so much of this deeper- but eh- anyways! Here we are! :D Sorry this is like, months and months later.

Ron had never quite known where he fit in the world.

One by one he watched his brothers get their letters and go to Hogwarts. He waited with anticipation for the year he’d get his own letter. Each year he got closer to being eleven, the hope and anticipation grew thinner. His brothers had grabbed wands and performed spells when they weren’t supposed to, and when Ron grabbed a wand nothing happened. It just sat in his hand like a stick. He’d had some awful scares, and no magic had come from that either. Everyone else could see the fairies in the yard, and only if he tried his hardest could he even catch a glimmer of them.

He turned eleven in March, and when it was time for Hogwarts letters that summer he waited. And he waited. And the final day of July came and his father came home with a grim look on his face.

‘Ron… Your mother and I need to talk with you,’ he said with a careful deliberation, in a careful tone he’d never used around Ron before.

‘Is… Is it about my Hogwarts letter?’

Read on Fanfiction.net or ao3 if you’d prefer.

The next week was the longest and hardest of Ron’s life, and that was saying something, considering he had spent months alone and miserable when he’d left the tent all those nights ago and been unable to return.

This time, however, he had his friends and family around him, and yet he missed Hermione more than he ever had before. He felt rather stupid, really, feeling so strongly, but he supposed the difference this time was that he knew how she felt about him, which made her absence so much more unbearable.

Hermione had not written to him in her week away but had made contact with the Ministry to update on her situation. Percy had passed on the information. She’d located her parents, but the last they’d heard (two days ago), she’d been unable to reverse the memory charm she’d placed on them. Not because she couldn’t, but because she was having difficulty in gaining her parents’ trust to let her get close enough to perform it.

Ron couldn’t imagine being in her shoes. He knew how much her parents meant to her and how hard it had been to erase their memories to begin with. He didn’t want to think about what would happen if she couldn’t get to them.

One thing that Hermione’s absence was good for, though, was connecting once again with George. Ron had been so caught up with Hermione and his own grief that he had not made the effort he perhaps should have to check in with his brother. George’s mood fluctuated greatly from day to day — hour to hour, really — which meant that his presence at the Burrow was sporadic, and he was prone to simply getting up and leaving when things got too much. As much as he wished to, Ron had been too afraid to say anything more than a hello to his brother out of fear of upsetting him.

Ron being protective of Hermione gives me so much happiness.

ron: I don’t get why everyone’s intimidated by hermione. she’s so cute.