Kra ‘O: Did you even proofread these?

Zoe: Yes, actually, I did! And I posted them to Tumblr first because Tumblr’s spellcheck is strangely good at catching mistakes!

Kra ‘O: Did you have your eyes closed? You clearly misspelled that, and you clearly made a typo and used the wrong word here.

Zoe: I am well aware of my own personal shortcomings and failures of articulation. I merely made your soul aware of such facets in the hope you would appreciate the predicament of my sorrow as escapism from the mundanity of your own cosmic reality.

Kra ‘O: Poetry won’t help you now. Not when there’s a glaring typo in your poem.

Zoe: Maybe I can just play it off. Maybe I meant to use that word intentionally!

Kra ‘O: Nope. Not believing it.

Zoe: Okay. What if it was my intention to purposefully insert a grammatical typo into the pronouncement, as a commentary about the English language, and to further an endless appearing string of constant purposeful mistakes as bearers of hidden messages across a composed body of immaculate work.

Kra ‘O: That could work, if it wasn’t so obviously a typo you overlooked.

Kra ‘O: Zoe, face it. No matter how you try to justify it, know won will beleive you if you in formed them it was a type O. 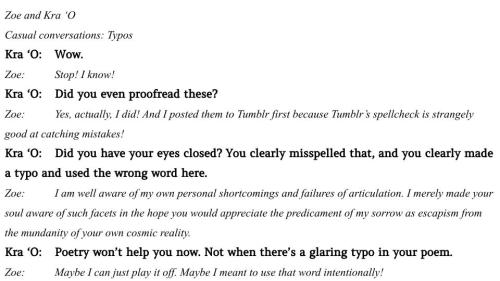 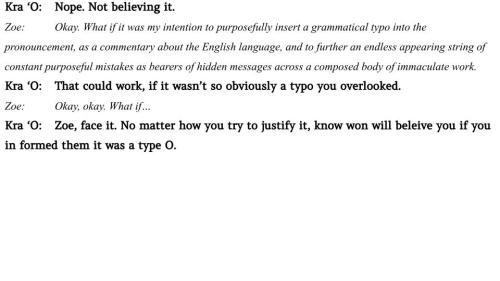 I know who you’re.

But is “photographism” even a word? Not entirely. It is, though, a term that was coined by the photographer [Irving Penn]. It isn’t a theory, but an idea supported by sketches, notes, photographs and posters.

understanding when someone speaks your tl with an accent? good shit

This is a transcript for Lingthusiasm Episode 52: Writing is a technology. It’s been lightly edited for readability. Listen to the episode here or wherever you get your podcasts. Links to studies mentioned and further reading can be found on the Episode 52 show notes page.

Lauren: I’m Lauren Gawne. Today, we’re getting enthusiastic about writing as a technology. But first, do you wish there was more Lingthusiasm to listen to? Even though this is Episode 52, we have almost a hundred episodes of Lingthusiasm. Some of them exist as bonus episodes over at our Patreon.

Gretchen: If you want to listen to those and have more Lingthusiasm in your earballs, you can go to patron.com/lingthusiasm. This also helps keep the show ad-free. If you like listening to a show without ads, help us keep doing that.

Lauren: The Patreon also fosters this wonderful linguistics enthusiastic community. In fact, we have a Discord server, which is basically just a wonderful chat space for people to talk about linguistics. There are over 350 people on the Lingthusiasm Discord right now.

Gretchen: If you wish you had other lingthusiasts to talk to to share your interesting linguistics anecdotes and memes and general nerdery, and you want more people like that to talk to, you can join the Patreon to also get access to the Discord. We launched the Discord community just a year ago, and it’s been really fun to see it grow and thrive and take on a life of its own since then. If you are already a patron, and you haven’t linked your Patreon and Discord account together, it’s there waiting for you. Feel free to come join us.

Lauren: We have Patreon supporter levels at a range of tiers. Some of them include additional merch. One of my favourite perks is the very scientific Lingthusiasm IPA quiz where we send you a short quiz and then we give you your own custom IPA character which is enshrined on our Wall of Fame.

Gretchen: It’s a fun quiz. We have fun looking at people’s answers.

Lauren: Our most recent bonus episode is a collection of some of our favourite anecdotes from interviews and from other episodes that didn’t quite make it into the original episode. We’re delighted to share those in that bonus episode.

Gretchen: You get to see a bit behind-the-scenes with that episode. Also, do you want more linguistics on your favourite other podcasts?

Gretchen: Constantly. We’re also very happy to do podcast interviews on other shows about various topics. If there’re other podcasts that you like that you wish would do a linguistics episode and interview one of us, you should tell them that! We’re happy to come on. Tag us both or something on social media or tell your favourite podcasts that they could do a linguistics episode because we’d be happy to do that.

Lauren: Gretchen, do you remember learning how to read?

Lauren: I feel like I have more memories of learning how to write, just because that’s such a mechanical thing. I remember sitting there writing out a row of As. I definitely wrote the number “five” backward for way longer than I probably should have, which is a really common thing that happens when kids are learning to write because it is a combination of brain skills and fine motor skills. But reading in English is something I feel like I’ve always just been able to do. I mean, I guess in comparison learning to read Nepali, which is written in a different script – it’s written in the Devanagari script – I have more memories of that because I did that in my 20s. Even now, I still feel the real disconnect between being relatively able to chat and really struggling to read and write. I still have to put my finger under the words as I’m going through, whereas with English it just feels like the words are beaming straight into my brain because I learnt to read that language so early in my life.

Gretchen: Yeah, I read at this automatic level. I can’t see a sign that says, “Stop,” on it and not read it in Latin script. But in undergrad I took both Ancient Greek and Arabic. In Greek, I got to the point – because the script is sort of similar enough and I was familiar enough with the letters previously-ish – that I got to the point where I could very slowly sound out words as I was reading them out loud because we had to do a lot of reading aloud in Greek class. But in Arabic, I was very much at that hooked on phonics level where you’re like, /p/-/t/-/k/-/a/. There are a few words that I have as sight words in Arabic. One of them is the word for “and,” which is “waa”, and one of the words for “the,” which is “al”, and one of them is the word for “book” because “kitaab” just shows up all the time. But most of the words I had to painstakingly sound out each letter and then listen to myself as I was saying them. I’d be like, “Oh, it’s that word,” even if I knew it, which is this process that I must’ve gone through in English, but I don’t remember doing it for the Latin script.

Lauren: I think that is one of the things that makes it really hard for people who grow up in highly literate, highly educated societies to tease writing and reading apart from language. But actually, when you step back, you realise that writing is actually super weird.

Gretchen: It’s so weird! It’s this interesting – it really is a technology. It’s a thing you do on top of language to do stuff with language, but it’s not the language itself. There are thousands and possibly millions of languages that have never been written down in the history of humanity. We have no idea. We’ve never met a society of humans, or heard of a society of humans, without language. But those are spoken and signed languages, which are just kind of there. Writing, by contrast, was invented somewhere between 3 and 4 times in the history of humanity.

Literally the fact that nearly every Pokémon fanfic says some version of ‘Being gifted when you’re young really fucks you up’ is so, so painfully accurate. And there is so much I can add to this but I can’t put it into coherent words right now so I’ll probably come back.

“With languages, you are at home anywhere.” - Edward De Waal

Been studying the English language since I was 3 but some sentences still baffle me. I feel so dumb in front of these sentences because it sounds profound but it’s just whooshed over my head.

I would never wanna start learning this language from scratch again.

More in the links below.

Hello, Hi, Hey =
- Ciao (to someone we know or some younger/same age people - very informal);
- Salve (to someone we don’t know well/older than us - more formal)
- Buongiorno or Buonasera are used as formal too or just to be funny with someone you know or when you wake up, to say hi to your parents.

Good morning = Buongiorno (Buona giornata = Have a nice day, used throughout the day)
Good afternoon = Buon pomeriggio (not very used: we tend to use buongiorno until 4/5 pm, and then start with buonasera until after dinner - or more easily, use salve/ciao the whole day - X )
Good evening = Buonasera (Buona serata = Have a nice evening, used in late afternoon/evening)
Good night = Buonanotte

On a side note, that has nothing to do with greetings:
*Beccarsi can be used also with these acceptions:

Why Blue in Japan Looks Like Green to Americans

Why Blue in Japan Looks Like Green to Americans

Why Blue in Japan Looks Like Green to Americans
Category Main
Description:
Go to Audible.com/hai or text ‘hai’ to 500-500 get your free 30 day trial Get a Half as Interesting t-shirt: https://standard.tv/collections/half-as-interesting Suggest a …
TopTrengingTV Hunting the most trend video of the moment, every hour every day 24/7.

[image description: An image of Shona people at a vendors market in rural Zimbabwe. Photo taken by Herb Klein.]

Where is the language spoken?
– Shona is spoken mostly in Zimbabwe. It’s also spoken to a lesser extent in Zambia, Mozambique and Botswana.

What writing system does the language use?
– It used to be written in the Arabic script, but that has fallen out of use. Today, Shona is written in the Latin script.

What kind of grammatical features does the language have?
– Shona is an SVO tonal language with 2 numbers, 3 persons, 6 moods (ind, sub, imp, hort, pot, rel), conjugation, concords, and up to 21 different noun classes (depending on the dialect). It follows a TAM system.
– It has multiple tenses, but I’m stuggling to figure out how many and what they are. If you know, please let me know. Thank you!

What do you personally find interesting about the language?
– There was an alphabet reform around 1940, and a number of characters were switched for equivalents in the Latin alphabet. ɓ (b with hook). The letters lost were ɗ, ŋ, ȿ, ʋ, and ɀ. I’m sad that the change happened, but it’s an interesting factoid nonetheless.

Duolingo made me sad ಥ╭╮ಥ

Duolingo: I miss you.