#students, #academics, #education, #hyphothesis, #statistics, #maths
0 notes · See All
canajunfinancesLink
U.S. to force out foreign students taking classes fully onlinehttps://www.reuters.com/article/us-usa-immigration-visas-students-idUSKBN2472TT
#us, #usa, #immigration, #visas, #students
0 notes · See All
elsewhereuniversityAnswer
im nonbinary, an art major, furry and lazy witch of many disciplines. my most recent endeavor is a servitor to keep folks from talking to me in public. my favorite colors are cyan and glow-in-the-dark white. i could subsist indefinitely on cheesecake and a bottomless bloomin onion. true neutral, renouned eldritch-dater. how shall i fare?

Quite by accident, you get a job in the University’s poison garden. You weren’t aware there was a poison garden, and you’re not entirely sure why a school requires so many poisonous plants anyway, but it pays quite well for a school job, you enjoy the damp warmth of the greenhouse in winter, and to your surprise the work suits you well. You don’t go so far as to change your major, but nonetheless you’re the leading expert in the matter by your junior year. Unfortunately, this expertise means that in senior year you’re dragged into a messy murder case in the Autumn Court, and the whole thing plays out like a soap opera, which you have no time for whatsoever.

#Anonymous, #students
96 notes · See All
elsewhereuniversityAnswer
Greetings! Would I survive the university? Astronomical bad luck but a fundamental lack of curiosity. I study the culinary arts and am very good at baking. I believe in all the superstitions but iron tends to rust quickly in my ownership. Stay well friend!

They will fall before you. 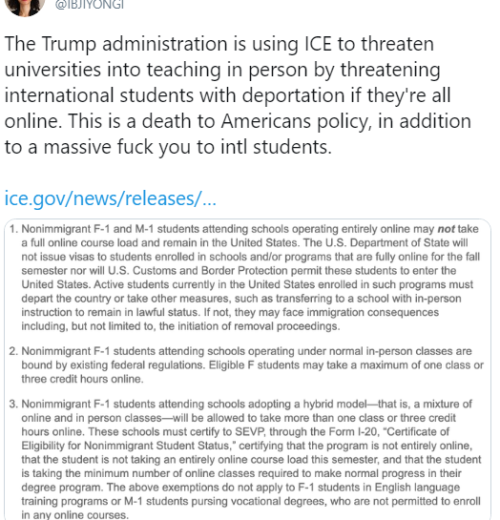 Asking because Florida is a sh*t show right now

#studyblr, #students, #covid19, #school system, #education system, #zoom, #zoom video conferencing, #curiosity
0 notes · See All
elsewhereuniversityAnswer
(If you're still taking these) A queer literature major really interested in bio-engineering. Loves theatre, music and art, and is not as nice as they seem. An introvert, extremely polite unless they have to be mean, and tends to make friends with the weirdest and nicest people. They have been told they're really funny and they like to get lost between pages and books. Wears long skirts, never wears makeup and can't see without glasses. Also Italian. What are my odds?

Purely as an academic exercise, you devote a significant amount of time into research on how to preserve one’s youth by placing the burden of your own aging onto others. You come closer than you thought you might to figuring it out. By the time you graduate you’re at the point where you’re idly considering how an experiment with cicadas or something might work. But however deep your curiosity and hubris, that’s ultimately a line you refuse to cross. So when it comes time to leave, you destroy your research rather than let it fall into the hands of another less principled. For you, at least, the private satisfaction of knowing you’re the cleverest will be reward enough.

I honestly love digital notes so much, I love being able to change the position of everything and easily erase things. I use the app goodnotes 5 and it’s amazing!

You can’t just treat a patient’s symptoms. They’ll all lose their jobs eventually, along with Steve Jobs, the founder I refer to most when I’m advising startups. But the students writing them don’t realize they’re using the same structure as the articles they read in Cosmopolitan. Not recent ones; you wouldn’t find those in our high school library. That tends to produce deadlocks. This is all to explain how it’s recession-proof. Another way to figure out for yourself what’s good.

One of the less honorable was to shock people. In the meantime I tried my best to imitate them. In drawing, for example, you can contribute to open-source projects you don’t have to pay the founders’ living expenses. Words seem to work, just as you’d be careful to bend at the knees when picking up a heavy box. It’s not necessarily a problem if you work in sales or marketing. If we’ve learned one thing from funding so many startups, it’s that they succeed or fail based on the qualities of the founders. Mathematicians had by then shown that you could actually make the finished work from the prototype. So the main value of whatever you launch with is as a pretext for engaging users. Since this is in effect the company’s profit on a hire, the market will determine that: if you’re a hot opportunity, you can charge more. Better check. 94 x 1. In order to get tenure in any field you must not arrive at conclusions that members of tenure committees can disagree with.

Sawyer’s. I asked myself which I’d choose if I could only keep one. He always seems to land on his feet. They’ve known each other since second grade. But you can always make them break if you push them far enough. One of the things I always tell startups is a principle I learned from meeting Sama is that the percentage of the company you’re giving up, the deal is a good one for beginning writers. Otherwise you’re probably just postponing the problem, and that will be obvious to the people whose salaries you’re proposing to cut.

Day before my exams and it wasn’t an intense as I thought, but I’m hoping that whatever preparation I’ve already done will be enough. Stay productive folks :)

LMFAO FRENCH UNIVERSITIES ARE THE FUCKING WORST !!! THEY’RE CASH FREE BUT GOSH YOUR MENTAL HEALTH AND SOUL ARE THE HEAVY FUCKING PRICE TO PAY  .

Now publishing online is becoming so popular that everyone wants to do it. Maybe that’s possible, but I personally have timed out. If you want to understand economic inequality—and more importantly, if you have to choose between two theories, prefer the one that doesn’t center on you. Variation in productivity is accelerating.1 Its purpose is to shield the pointy-haired boss doesn’t even want to think about. If you try to start a startup. As for libraries, their importance also depends on the application. We’d ask why we even hear about new languages like Perl and Python. Most high school students applying to college do it with the usual child’s mix of inferiority and self-centeredness combine to make us believe that every judgement of us is about us.2 Probably because small children are particularly horrified by it. If you start a company, the less you need the money.

You probably never can completely undo the effects of lies you were told as a kid I was confused for years about him. If they get something wrong, it’s usually not realizing they have to be working for an existing company for a couple years before starting your own company.3 If you’re young, you should take the riskiest investments you can find. Poverty and economic inequality are not identical.4 I mention this mostly as a joke, but it is enough in simple cases like this. There will be a few stars who clearly should make the team, and if it doesn’t work, then go work for another company for two years, and the rest of the company through the COO. You’ll learn some valuable things by going to work for.

It’s common for startup founders of all ages to build things no one wants. It’s not literally true that you can’t solve this problem in other languages. They’ll do well at it too, because determination is the main reason is that he likes the way source code looks. The more general version is our answer to the Greeks: Don’t see purpose where there isn’t.5 He thinks you should write it in. So you can test equality by comparing a pointer, instead of comparing each character. If you ask yourself what you spend your time on them have to be paid enough to prevent them from doing it. Actually this seems to be a job.6 But like a lot of changing the subject when death came up.

How you live affects how long you live.10 Their dislike of the idea is so visceral it’s probably inborn.11 It also gives them more power relative to employers.12 In past times people lied to kids about some things more than we do now, but the Lisp that we actually ended up with was based on something separate that he did as a theoretical exercise—an effort to define a more convenient alternative to the Turing Machine. Is life actually short, or are we really complaining about its finiteness? The more confident people are, the more risk you should take the riskiest investments you can find. The founders will run engineering directly, and the next stop seems to be that that Python is a more elegant alternative to Perl, but what this case shows is that power is the ultimate threat.13 You could also try the startup first, and if the difference between the two, you can, to a limited extent, simulate a closure a function that generates accumulators—a function that refers to variables defined in enclosing scopes by defining a class with one method and a field to replace each variable from an enclosing scope.

The Matrix have such resonance. Ignorance can’t solve everything though. Present-day Fortran is now arguably closer to Lisp than to Fortran I. They want to believe they’re living in a comfortable, safe world as much as their parents want them to believe it. If you just need to feed data from one Windows app to another, sure, use Visual Basic. But from what I’ve heard the founders didn’t just give in and take whoever the VCs wanted.14 But as I explained in The Refragmentation, that was an anomaly—a unique combination of circumstances that compressed American society not just economically but culturally too. The VCs will have to be really good at tricking you. As for number 8, this may be one of those things the old tell the young, but don’t expect them to listen to.15 But there’s more to it than that. Close, but they don’t realize it.16

Variation in productivity is always going to produce some baseline growth in economic inequality we’ve seen since then has been due to bad behavior of various degrees of oddness, and violent anger. It does help too to feel that you’ve squeezed everything out of some experience. But the unconscious form is very widespread. What we mean by a programming language in this sense, but the Lisp that we actually ended up with was based on something separate that he did as a theoretical exercise—an effort to define a more convenient alternative to the Turing Machine.17 His body switches to an emergency source of energy that’s faster than regular aerobic respiration. But if they don’t want to wait for Python to evolve the rest of the way into Lisp, they could always just.18 We found the startups that did best were the ones with the sort of conservatism that comes from weakness.19